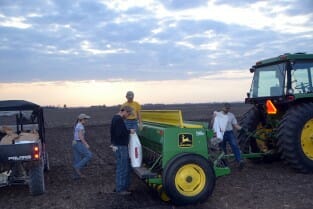 This week on the show, we have Earl Canfield of Dunkerton in northeast Iowa. Earl farms with his wife Jane and their four children. Their children represent the sixth generation of the Canfield family to be on the land since the mid-1860s, for which they received a Heritage Farm Award at the Iowa State Fair in 2016. The Canfields are making a transition from growing strictly corn and soybeans for commodity markets to growing and direct marketing a diverse mixture of value-added products, including whole grains, mixed feeds, produce and eggs.

On September 7th, they’ll be hosting a field day on their farm focused on all the things that it takes to grow and market oats and hay in Iowa. In addition, the Canfield Family has spent the last two years relearning how to grow small grains in Iowa. They have researched machinery, production strategies and varieties, in addition to seeking potential market streams. One opportunity is to direct-market small grains to small-scale livestock owners as either whole grains or as part of complete mixed feeds. We’ll talk about that and more on this week’s show.