“Give ’em some grass, water, and salt,” says Russ Wischover, “And cash the check at the end of the year. That’s my kind of livestock!” Russ, who farms in in Bedford, just north of the Missouri border, has converted his farm into pastureland over the last six years. He’s a proponent of using very little infrastructure and raises livestock best suited to his extensive farming management.

Russ purchased his farm in 2007 and at that time it was partly cropped by a tenant farmer and partly in the Conservation Reserve Program (CRP). When Russ permanently moved to the farm, the fields weren’t planted back to corn or soybeans and he started seeing grasses come up in the bare areas. Feeding purchased hay and bale-grazing “really woke the ground up” to the extent that desirable perennial species became prevalent. Grazing the former CRP ground helped also helped revive his land, and now fifty species of native prairie plants can be identified on his farm.

Russ raises lesser known breeds of livestock, known for their ability to perform well on grass and low-maintenance traits. Russ raises Murray Grey Cattle which are genetically Black Angus with two dilution genes, resulting in a grey cow with black skin. The dark skin lessens the risk of skin cancer. Russ noted that Murray Grey cattle are non-aggresive animals. Russ’s bull is a Murray Grey crossed with a Mashona Beefmaster. His sheep herd is comprised of 95 St. Croix ewes, which are hair sheep. They naturally shed their hair coat, therefore don’t need shearing and are known for their resistance to internal parasites. 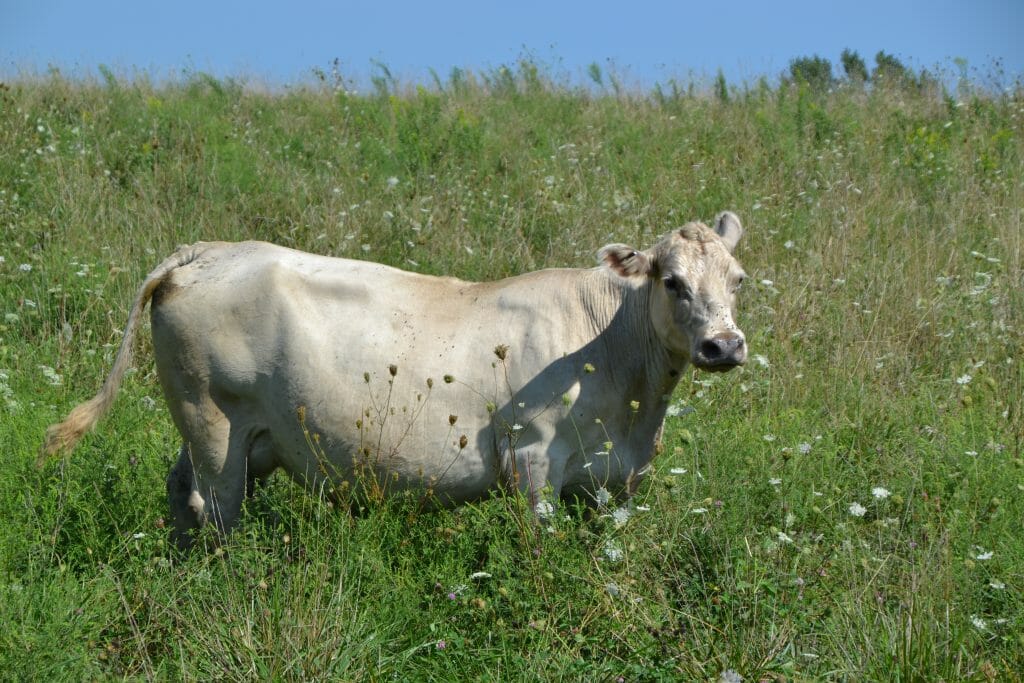 “Anything that’s eating grass is run together – except the intact males,” said Russ when explaining his grazing system. Cattle and sheep graze in the same group, rotating through all 120 acres of his farm.  He strives for a 45 to 60 day rest period after grazing. Both his cattle and sheep predominantly eat forage year-round, with the exception being some supplemental soybean meal if their hay tests less than 6% crude protein. Russ made the decision to cut out grain after becoming an avid reader of The Stockman Grass Farmer magazine.

Russ doesn’t vaccinate or de-worm his livestock, nor did he have to treat for pink eye this year. Generally, ram lambs and bull calves are not castrated and are sold intact. If he does decide to castrate select males, he uses a Burdizzo clamp. He notches ears instead of using ear tags. He quit forcing youngstock to wean a couple years ago – letting cows wean their calves, “Raising calves is the cow’s job, and that includes weaning.” 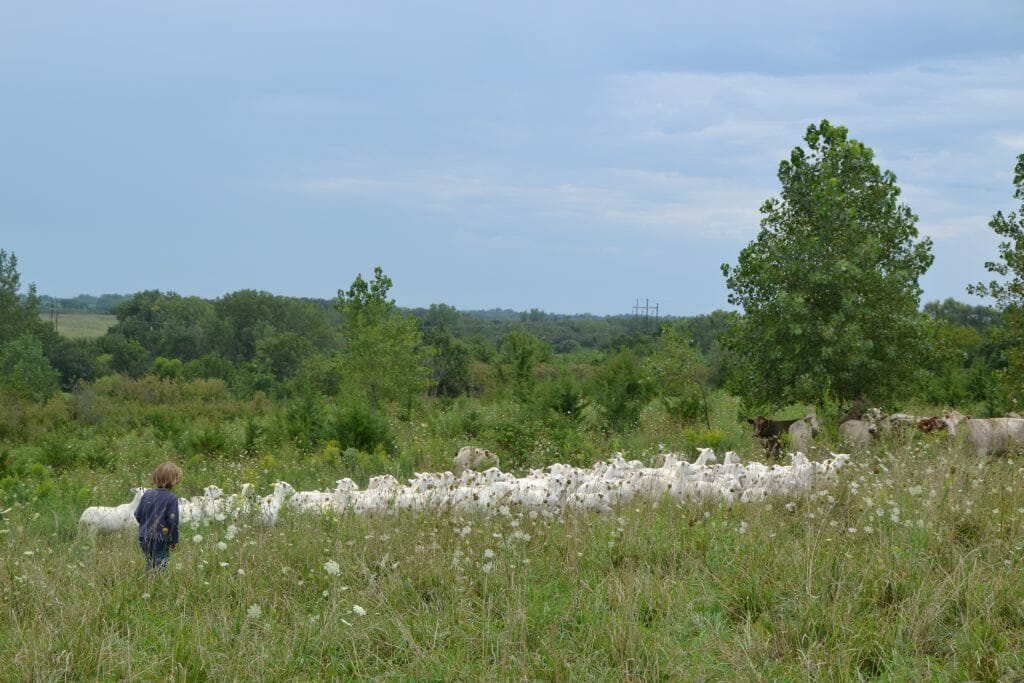 The flock of St. Croix sheep, with cattle in the background. Sheep and cattle graze together.

For Russ, sheep have proven to be more profitable than cattle. He’s been able to add one ewe per cow without adding any acres to his existing pastures and says sheep can be raised on 25% less land than is needed for cattle. “I think sheep are underrated as far as livestock startup,” said Russ, “They’re so much more efficient cost-wise for beginners.” For more on Russ’s thoughts on sheep as an entry way into farming, listen to his On-Farm Podcast. A field day attendee asked why he has cows, “Cows have some pasture management advantages since they’re non-selective graziers and have a big foot,” answered Russ. Both cattle and sheep provide different ecological benefits and Russ said, “I don’t have any weeds because it’s all feed!”

Russ generally sells his livestock at the auction in Maryville, Missouri. He doesn’t finish his cattle – they are sold at 10 to 11 months old at 550 pounds. His lambs are sold the first week of December to the ethnic holiday market for $2/pound. Considering his only input is forage, marketing at the auction is profitable for Russ.

The Natural Resource Conservation Service (NRCS) installed an electric water pump that pulls from a pond on Russ’s property. Russ used a publication titled Watering Systems for Grazing Livestock to design a system that would pump water 60 feet uphill to different paddocks, figuring he needed 2.1 pounds of pressure per foot of water pipe. His has a four foot deep hydrant that doesn’t freeze, but he has to break ice in individual water tanks when it’s cold out. “Low- tech systems mean low-investments, but low-input means high-labor,” explained Russ.

As for fencing, Russ uses four strands of Polybraid electric fence made by Powerflex.  He’s still using the same fence and Stafix energizer he purchased in 2011, noting the high quality of both products. He also retrofitted a two-wheeled dolly to transport his energizer and solar panel from pasture to pasture. He recommends replacing the original dolly wheels with 12 to 26 inch wheels in order to wheel through tall vegetation and over bumps.

Mary Damm, a prairie ecologist, spent the days leading up to the field day walking Russ’s land and identifying plants. She created a list of at least fifty species growing in what was CRP ground for thirty years. Russ took the land out of CRP so he could graze it, and has seen more diverse species start to come back, many of which are Iowa natives. Mary told the crowd about prairie plants impressive root systems – 2/3 of the plant grows below the ground, while 1/3 can be seen above ground. As she spoke, attendees picked plants and asked her to identify them. While we stood around, we found prairie cord grass, native Iowa thistles (which can be identified by leaves with white undersides), asters, needle grass, partridge pea, heal-all, dodder, agrimony and others. While we stood in the wild pasture, we could hear bobwhite quail singing.

Fred Provenza and his research on grazing behavior was mentioned as farmers discussed what livestock have preferences for. Mary said cows don’t like needle grass. Mary referenced literature from the early 1900’s that mentions grazing of native Iowa prairie.

Thank you to Russ Wischover for opening up his farm and to Mary Damm for traveling to join us. Thanks to the field day sponsors: Taylor County Soil and Water Conservation District, Premier One Fence, and Welter Seed & Honey Co.