“Land is like our checking account – we can’t take out more than we put in,” said Jamie Hostetler, to an audience of 165 people at his field day in September. Jamie and his family operate a grass-fed beef farm, raising Red Devon cattle and specializing in seed stock production. The cattle are rotationally grazed and managed in a way to “nurture life above the soil and below the soil” explained Jamie, who strives to produce the highest quality meat while simultaneously regenerating the soil. 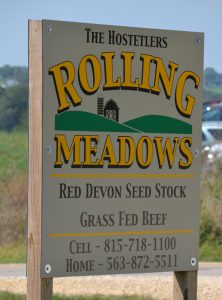 Rolling Meadows Farm, located in Bellevue, is aptly named – made up of 300 acres of hilly pastures. Before the Hostetlers moved the farm in 2010, from Rock Falls, Illinois, most of the farm was planted in corn. In the fall of 2010, Jamie chisel plowed the corn. The following spring he disked, harrowed, cultivated and cultipacked before planting a pasture mix. The mix was a Newman Turner blend with a number of different grasses and forbs – including white clover, birdsfoot trefoil, ryegrass, brome, chicory, plantain, orchardgrass and tall fescue.

The cattle destined for finishing are rotated to a fresh paddock every 12 hours, fenced in with one electrified strand of high tensile fence. Jamie and his sons have perfected this routine and it only takes them five minutes to do this. By moving this frequently, the cattle are consuming the most nutritious parts of the plant and leaving lots of plant residue behind – which is beneficial for soil cover and plant regrowth. By grazing this way, Jamie is optimizing the omega-3 fatty acids in the meat, preventing parasites from becoming an issue and controlling flies. His cattle gain an average of 1.5 pounds per day. After grazing, pastures are rested for 35 to 50 days.

Cattle are supplemented with loose mineral from Wick’s Livestock Nutrition in Nebraska that’s spiked with selenium yeast, iodine (for pink eye prevention), copper and manganese. It’s fed free choice, in a three-compartment feeder that sits in a truck tire with eye bolts used to haul the feeder around pastures. Also included in the feeder is kelp, Redmond’s salt and Redmond’s conditioner, a clay-base product that pulls toxins out which Jamie uses because of chemical residues from when the farm was producing corn. Jamie’s land is certified organic.

Jamie has been experimenting with drilling annual species, such as sorghum sundangass, into perennial pastures using a Plant-O-Vator, which combines strip tillage and drilling in one pass. These annual species are grazed when his cool-season pasture species are slumping in the summer. “My limiting factor [in the cattle’s diet] is energy, and I plant sorghum sudangrass to try to introduce more energy then protein,” said Jamie. Grass fed meat can taste gamey if the protein content of the ration is too high.

Firstly, it’s necessary to do the math to figure out how many pounds of forage you’ll need standing in order to get through the non-growing season. In order to set aside enough stockpile to get through winter, you may not be able to hay everything that you’re used to haying. This means that spring pasture manipulation, such as clipping, may be needed to keep forage in a vegetative state longer into the season.  When Doug ran the numbers for his own farm in northern Missouri, he figured it would cost him the same to contract graze cattle for six months as it would to purchase the hay needed to feed those cows – so letting cows harvest the grass instead of baling the grass was the obvious answer for him. Doug recommended this video, I Sell Water and Sunshine, for a closer look into his system.

Jamie raises Red Devons for the breed’s ability to convert grass to meat efficiently. He says they have a good intramuscular fat score, which represents marbling in the meat. The grain in the meat is smaller than other cattle breeds, which contribute to tenderness. He selects his cattle for meat quality and meat volume.

Jamie learned linear measurement from Gerald Fry and discussed measuring a cows heart girth and topline with the group.  He likes to see cattle with a deep heart girth, wide rumps and flanks, full from the shoulders all the way back, and a head even with the top of the body. Jamie says you can gain a 20% increase in feed efficiency in a cow that is built right verses a cow that’s not.

At the time Red Devons are ready for market, they weigh 1350 pounds, with an 800 pound carcass weight. This works out to a 58% live weight yield. On average, the carcass yields 64.5% meat. At slaughter, cattle average 24 months old, but this can vary between 20 and 28 months. Jamie’s cattle are finished when they have a full pocket between the hip and pin bones, there’s a roundness in the rump and the brisket is full (the brisket fills last).

“Get in front of an economic bubble and cater to niche markets,” said Jamie. That economic bubble is grass fed beef. All of the grass fed and finished meat produced at Rolling Meadows Farm is direct marketed. Word of mouth is their greatest marketing tool, “Our customer is our best source of new customers,” explained Jamie.

He charges $3.50 per pound hanging weight and the customer pays the processing fees. They’ve maintained this price for over five years. The Hostetlers process their cattle at Andover Meat Inc. “We believe it’s the healthiest beef we know how to raise and to feed our own families,” concluded Jamie.

Thank you to the Hostetler family for opening up their farm and preparing an outstanding lunch! Thanks to Lori Schnoor from Jackson County NRCS and Doug Peterson, regional NRCS soil health specialist for the soil demonstrations. Thanks to our field day sponsors: Iowa Farmers Union, Prairie Creek Seed and Welter Seed & Honey Co.