A group of farmers traveled to Ohio in August to spend a day at Dave Brandt’s farm. This blog accompanies the article in the Autumn 2017 Practical Farmer “Members Reflect on Lessons Learned in Ohio.”

In this reflection, I will be highlighting some of the topics we dug into during the trip including crop rotation, seed selection (coatings and genetics), enterprise diversification, grazing cover crops, and how to engage more farmers in regenerative farming practices.

Stefan and Meghan came prepared with activities to keep us occupied on the long bus ride, including a challenging game of Ohio trivia. Many of us were surprised to learn that soybeans are Ohio’s #1 crop. Shortly after arriving at Dave’s farm on Friday morning, we learned why—soybeans are not only commonly double cropped, with two harvests in the same calendar year, but some Ohio farmers grow continuous soybeans year after year.

This was the case for the first field the hayrack stopped at on Dave’s farm, in Carroll, Ohio. It had been in continuous soybeans for 25 years until just three years ago when Dave began leasing it. Prior to European settlement when most of Iowa was an ocean of densely-rooted prairie, Ohio was part of the eastern deciduous forest, which means that their soils are naturally higher in clay and lower in organic matter than Iowa soils. In the yellow clay of the recently formerly continuous soybean field, Dave increased the organic matter from 1% to 1.7% in just three years by implementing an extended rotation, planting cover crops, and practicing no-till. The three-year framework of this rotation (corn-cover-beans-small grain-cover) is applied throughout his entire farm.

In order to cut costs, Dave plants untreated, non-GMO seed.  He says that seed coatings do not provide any benefit after a few years of building healthy soil biology. One reason the Brandt family does not need seed coatings: they plant later in the spring to “let the cover crops run”, and gain a lot of biomass ahead of planting corn or soybeans. Warmer soil temperatures favor healthy crops, and help avoid conditions that would promote fungal disease.

One intriguing juxtaposition on modern vs. older seed genetics is that while Dave appreciates the recent breeding achievements of short-season varieties, he is also working in collaboration with Spectrum Seeds to breed from 1980s-era genetics. The characteristics they are breeding for from these older genetics include bigger root systems, more flexible and larger ears, upright leaves, and nematode resistance.

Next, we visited Berry Family Farm (est. 1811), where Brad Berry and his family have 30 head of cattle, pigs from seven sows, 100 laying hens, and each summer raise six batches of 200 meat chickens, in addition to growing non-GMO crops in an extended rotation. We learned about the operation, its marketing strategy, and challenges of managing such a diverse farm. In addition to seeing the livestock, we were excited to see the diverse cover crop mixes in the ground, which were purchased from the Brandt’s seed company, Walnut Creek Seeds. We compared the nitrogen fixing nodules on the sunn hemp vs. soybeans vs. cow peas (all of the soybeans had strong nodules, but it appeared that the sunn hemp had not been quite as easy to inoculate).

In addition to learning about Berry Family Farm, Brad’s enthusiasm for Practical Farmers of Iowa really brought home just how unique and groundbreaking our organization is. Brad explained that he has been learning from Practical Farmers publications and Farminars for several years, and was shocked and humbled when he learned we would be visiting his farm. In particular, he mentioned the PFI videos on small grains, and that PFI materials are the only place he has been able to learn about succotash—growing field peas, oats, wheat, and barley together as feed for livestock. He even furnished a 1992 issue of The New Farm Magazine of Regenerative Agriculture that featured Tom and Irene Frantzen’s pastured pig operation. 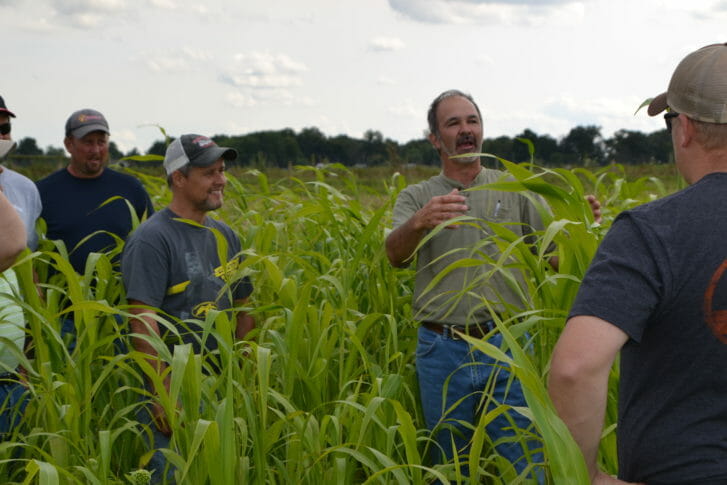 Brad Berry stands in his field of summer annuals, yet to be grazed.

On the last evening of the trip, we met up with Dave and Jay at the Olive Garden next to our hotel for a meal and continued conversation. I asked, “Since scientific evidence doesn’t motivate people to adopt better practices, what do you think will?” He replied, “hard times”, and shared two anecdotes from his own life.

Early in his farming career, not long after his father had been killed in a tractor roll-over accident, a landowner had decided to drop him for another tenant who offered a higher rental rate. His banker encouraged him to pare down his farming equipment to the basics—a planter, sprayer, and a combine. Hard times forced him to go no-till, and also brought about an interest in cover crops as a way to reduce nitrogen input costs.

Next, Dave shared a story of transformation that began outside of his farm, and changed the way a generation of local youth have been educated. Not long ago, tractor vandalism was a major problem for farmers in the area, and any tractor parked within 1000 feet of a road was at risk. At one point, the Brandt family had incurred $10,000 of damage when their tractor’s windows were knocked out and the stereo system was stolen.

After they had resolved the issue with the three responsible youths (by way of hard farm labor), Dave contacted the two local FFA chapters and began bringing students onto his farm for tours. In an area with so much urban development, the vast majority of FFA students did not grow up on farms. Then, Dave discovered that the school districts owned farm land, and helped the students begin farming it themselves—creating a farm plan, planting, and combining the crops, with each student taking a single pass behind the wheel of the tractor. In the subsequent years, tractor vandalism has disappeared.

Personal Reflection
For me, one of the greatest benefits of the trip was the opportunity to spend an extended time with other PFI farmers of diverse experience levels and cropping systems. It also gave some of us who don’t usually take a vacation in the summer the chance to explore a new place–sample a farmers market from the other side of the table, tour a restored wooden waterwheel mill and climb a loch of the Ohio-Erie canal. 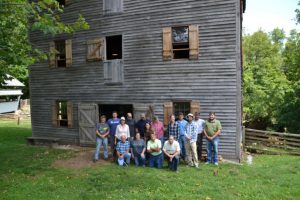 The group in front of Rockmill, an old grist mill in Fairfield County, Ohio. 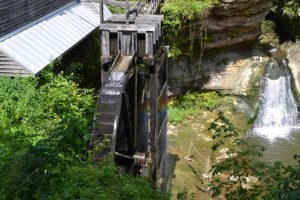 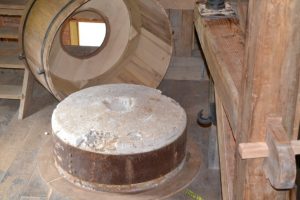 Up close shot of a millstone.

It was intriguing to learn about unexpected region-specific market forces that differ from ours in Iowa. For example, the market for straw is strong because of mushroom production and strip mining. On the other hand, the market for hay is not good because of a lack of cows and large beef processing facilities. Another major point of fascination was that the Brandts do not experience hail, due to the firing of a locally-drilled natural gas-fueled “hail cannon” on a neighboring apple orchard when conditions are perilous.

Seeing how hard the Brandt family and their grazing neighbors have worked to invigorate their soil was a strong motivator to protect the richness that we often take for granted in Iowa. As we experienced on the visit to Gabe Brown’s farm in North Dakota, the keys to building healthy soil (minimum disturbance, living roots, diversity, and keeping the soil covered) are adapted to, rather than limited by geographic region. The Brandt family’s work to further the breeding of crops that are adapted to a low-input, regenerative system and diversify enterprises rather than expand their land base gave all of us PFI farmers quite a bit to mull over as we deliberated how to make our own farming systems more regenerative on the long bus ride home.