Dave and Meg Schmidt operate a diverse livestock farm, Troublesome Creek Cattle Co., in Exira IA; raising grass-fed and finished cattle and sheep, pigs and poultry. Feeding the 100% grass-fed cattle herd over the winter is a great expense, so they have experimented with feeding different forage sources- hay, cover crops, crop residue and stockpiled pasture to minimize costs. Hay is the most expensive forage to feed during the winter, so the Schmidt’s were curious how the could extend their grazing season and decrease the amount of hay they have to feed. 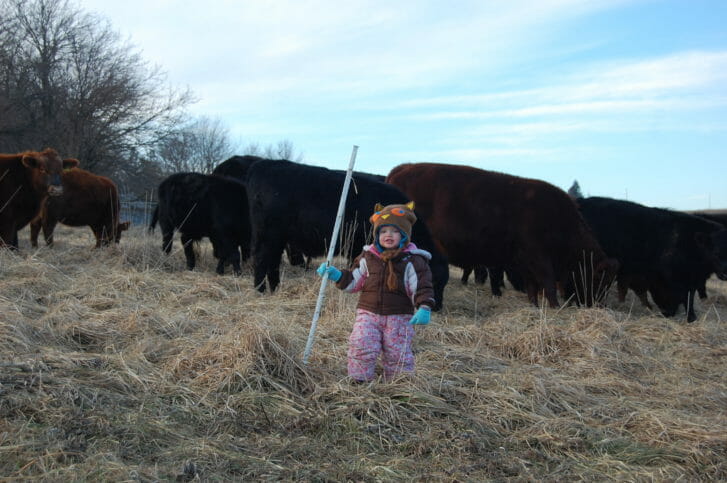 This research was conducted during the non-growing, winter seasons, from 2013 to 2017. The Schmidts recorded the movement of animals through different lots and pastures, tracked weights on a monthly basis, and noted the amount and value of feed consumed.  Monitoring began when animals finished the normal summer grazing and moved to winter crop fields or stockpiled pastures – approximately November through the end of April.

Cereal rye, wheat, hairy vetch and/or oats were planted three out of the four years, for the purpose of grazing during the winter. Table 1 shows seeding records and costs. In 2013-2014 and 2014-2015, cover crops were aerially seeded by a neighbor. In 2016-2017, cover crops were drilled by Dave.

Stockpiled forage in the pastures was comprised of orchardgrass, red clover, smooth brome grass, tall fescue and Kentucky bluegrass. Generally, the Schmidts stopped grazing pastures in August in order to grow enough to stockpile for winter.

The percentage of hay consumed by the cattle herd during each non-growing season is shown in Figure 1. The remainder of the herd’s ration was fulfilled by a mix of cover crops, crop residue and stockpiled pasture, depending on the year. Herd size is listed in animal units (AU) which equate to 1,000 pounds of animal.

Growing animals were weighed approximately once a month. The weights nearest the beginning and end of the winter feeding period were used to figure average weights and average daily gains (ADG). “Last year [2016-2017] was our first time with significant stockpile grazing and the finishers are the heaviest we’ve ever had them at this point in time. We were able to dramatically reduce the amount of time the cattle were fed hay in the lot – roughly early February to mid April. Perennial stockpile really pays because we can graze it shorter to the ground when it’s dormant, so animal days per acre go way up” stated Dave.

Utilizing diverse winter forage sources allowed the Schmidts to feed less hay, increase the size of their herd and save money.  The Schmidts concluded that incorporation of stockpiled pasture is necessary to decrease costs and work towards their goal of only feeding hay for one month per year. To see a detailed cost comparison and to read more about calf and feeder weight gains over each winter, read the full report here.

“We should be able to graze stockpiled annual and perennial pasture well into December. When that feed source is gone we will feed baleage; wrapped oats that were cut at flowering and wrapped alfalfa and orchardgrass. Once that’s gone we’ll have to buy dry hay.”  Dave and Meg hope these research results aid other farmers when deciding how to extend their grazing season and cut winter feed costs.