Two years of monitoring birds on a central Iowa farm has shown that rotationally grazed pastures support threatened bird species. Properly managed pastures, grazed by a herd of grass-fed cattle, created a desirable habitat for grassland birds, which were attracted the pasture’s mix of short and tall vegetation. Some bird species, such as the bobolink and grasshopper sparrow, seemed to prefer these pastures over a nearby prairie conservation area.

Since 2016, farmer Bruce Carney of Maxwell, Iowa has been working with researchers from Drake University to conduct bird counts to better determine the effects of grazing on bird conservation.

The Trial Was Conducted By:

In both 2016 and 2017, there were significantly more birds counted in Bruce’s pastures than in the nearby prairie.  “Grazed areas are much more favorable for bobolinks,” said Keith Summerville, Environmental Science professor at Drake University. Bobolinks are ground-nesting birds and prefer grazed grassland over tall and dense vegetation. Some farmers regard bobolinks as an indicator species for a healthy ecosystem. 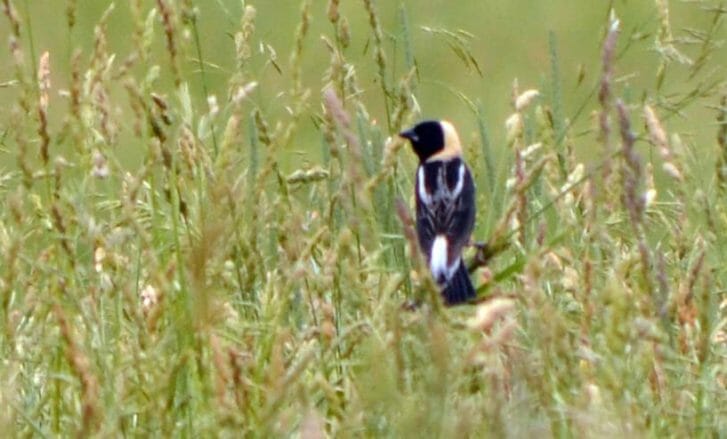 2016 and 2017 average bird abundance, for the five species of conservation interest, in A. restored prairie and B. perennial pasture. Cattle grazing periods in the pastures are designated by horizontal black lines.

Two years of data shows that a properly managed, pasture-based grazing operation can provide habitat for a diverse set of birds and support large bird populations. “I learned that you don’t have to have thousands of acres to conserve wildlife. At first, I assumed the prairie would have more birds than my farm, but it really comes down to management. Smaller parcels of land, managed properly, can create favorable habitats and support birds,” stated Bruce.

For more details on this trial, read the full report here: Monitoring Birds in Rotationally Grazed Pasture, 2017 Update. This project was supported by the National Fish and Wildlife Foundation and Drake University.

For more information about this study and other studies as part of PFI’s Cooperators’ Program, contact Meghan Filbert