“We started planting cereal rye because it was easy to calve in. Now, most all of our covers are grazed as a way to justify the costs,” said Mark Schleisman, of Lake City. Cover crops that are grazed have value, but how much value? A three-year PFI research project, initiated in 2015, helped quantify this value by putting a price tag on the forage produced by cover crops. For three cow-calf producers in northwest Iowa, the practice of grazing cover crops, combined with cost-share funding, provides positive economic returns within the same year the cover crops were planted.

Wesley Degner, of Lytton; Bill Frederick, of Jefferson; and Mark Schleisman seeded cover crops of their choosing with the intention of grazing the forage produced. Farmers kept grazing records in order estimate the amount of dry matter cattle received from the cover crop. This dry matter was then valued at $80 per ton – a conservative value considering that hay is currently selling for $130 per ton.

All revenues and costs were then considered in order to complete an economic analysis. Read the full report here: Economic Impact of Grazing Cover Crops in Cow-Calf Operations 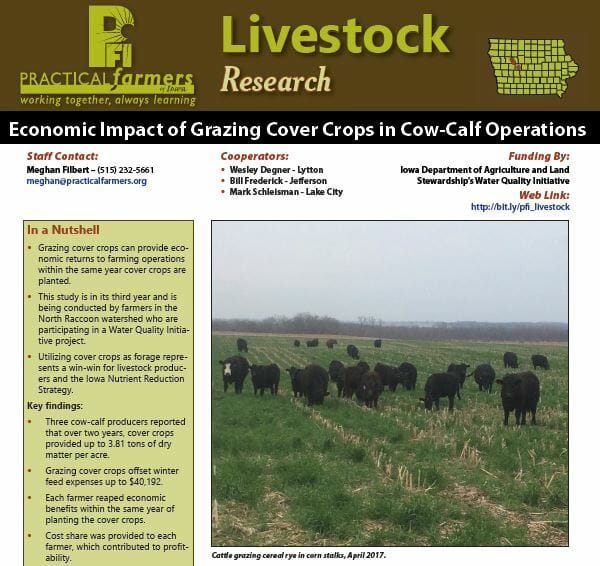 The Trial Was Conducted By:

Across the three farms, the value of cover crop forage ranged from $28 to $61 per acre, before costs were removed. Costs included cover crop establishment and termination, labor, fence and water. In some cases, costs exceeded forage value, which highlighted the importance of planting cover crops early and waiting to graze until there is plenty of growth available. In the cases where costs exceeded value, cost-share payments, ranging from $11 to $41 per acre, helped keep farmers in the black.

Total net economic gain ranged from $2 to $60 per acre, a variance that can be attributed to the farmers’ different levels of experience with cover crops and their understanding of issues related to cover crop planting and grazing management. Wesley had never planted or grazed cover crops before this project. “Now that I’ve had a bit more experience with cover crops, I planted an additional 208 acres in 2017,” he says.”I grazed them from November to early January and plan on getting spring grazing out of these acres too. I’m still learning, but I think grazing both in the fall and spring will help me remain profitable.” 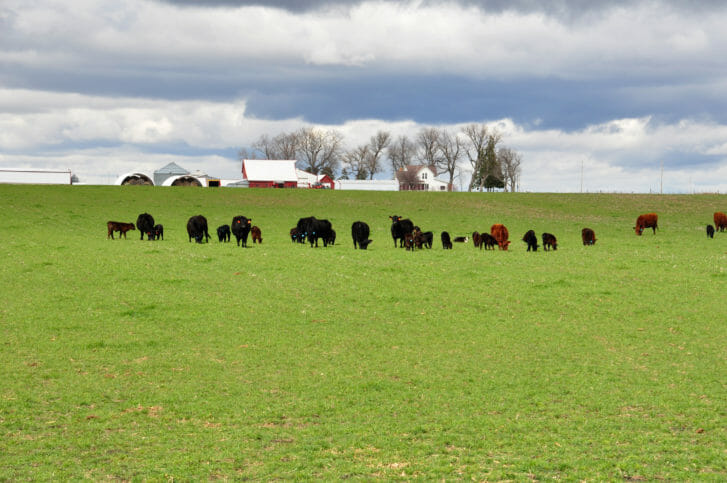 To see the full economic impact analysis for each farm, read the full report here: Economic Impact of Grazing Cover Crops in Cow-Calf Operations. This project was supported by the Iowa Department of Agriculture and Land Stewardship.

For more information about this study and other studies as part of PFI’s Cooperators’ Program, contact Meghan Filbert at meghan@practicalfarmers.org