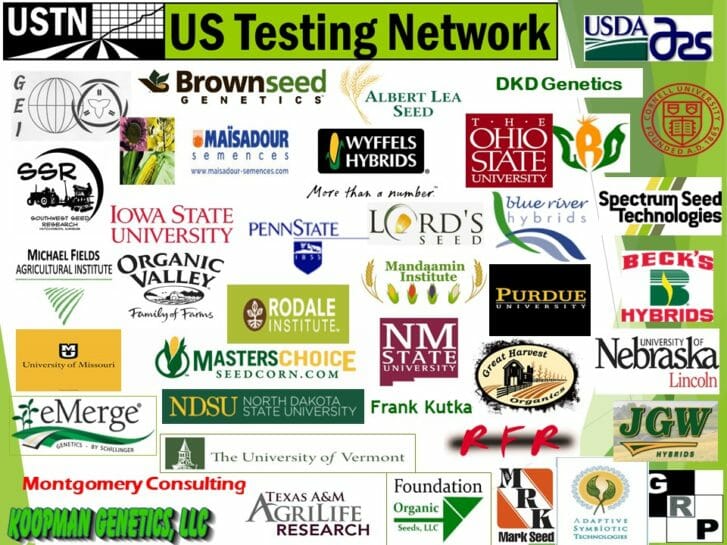 The US Testing Network for non-GMO and organic corn yield trials has evolved since its founding in 2009.  Public data from the 2017 trials is now available online.

For more information about USTN and its members, go here.   For USTN Public Data, go here.

It all started in 2009, when a few cutting-edge seed corn retailers and breeders decided it was time to build something they couldn’t find – a yield trial testing network for their non-GMO and organic hybrids.  PFI’s Sarah Carlson was there and helped to create the US Testing Network (USTN), a member-run organization for seed retailers and public and private breeders developing hybrids for the non-GMO and organic seed corn markets.   Now encompassing a regional network of more than 40 locations in 11 states, USTN has become the go-to option for small plot yield trials for those previously underserved markets.  Since USTN’s inception, PFI has acted as the test coordinator for the trials, with USDA-ARS (Ames IA) performing the data analysis.

How does this help farmers?

The ultimate goal of USTN is to help make more non-GMO and organic seed corn options available for farmers.  Up until 2017, results from the yield trials were shared only among USTN members, primarily because many of the entries tested were experimental and not yet ready for market.   In 2017, several testers submitted entries that were ready to be shared with the “public.”   Of the 145 entries in the 2017 trials, 51 are public and the data now available on PFI’s website.  That means farmers can now get a glimpse of the potential of new non-GMO and organic seed corn hybrids.

What data is available?

The reports show yields for the “public” entries in the test.  But, the average yield for all entries in the test (public and private entries) is also shown, so you can see how the test hybrid fared overall.  Data is organized by “conventional” or “organic” management and CRM (crop relative maturity), with yields reported from each test location.  The name of the hybrid and the organization/breeder submitting the hybrid for testing is also listed, with contact information provided.

Going forward, it is expected that more public entries will be tested.  That data will also be available on PFI’s website, building an important non-GMO/organic seed corn resource for breeders and farmers alike.

For more information about USTN and its members, go here.   For USTN Public Data, go here.