On March 29th, 38 people braved the chilly weather to attend a field day hosted by Clark Thompson at the Royal Café in Story City, Iowa. Clark talked about his adoption of no-till and cover crops as well as his new bioreactor. After that, Doug Adams and Patrick Chase of the NRCS presented on soil health and ran a rainfall simulator for everyone. After these presentations, we went out to Clark’s farm to see his cover crops and his bioreactor.

Clark started his presentation by talking about his goals with farming: to be more efficient, to make decisions based on data and not on habits or what his neighbors are doing, and to follow what the data says. Data is very important to good decision making, and Clark uses his own data from scouting reports and many different soil tests to find multi-year trends. To attain the goal of efficiency, Clark practices no-till beans and strip-till corn. These practices minimize the number of trips across the field, thus optimizing equipment usage and minimizing equipment cost. 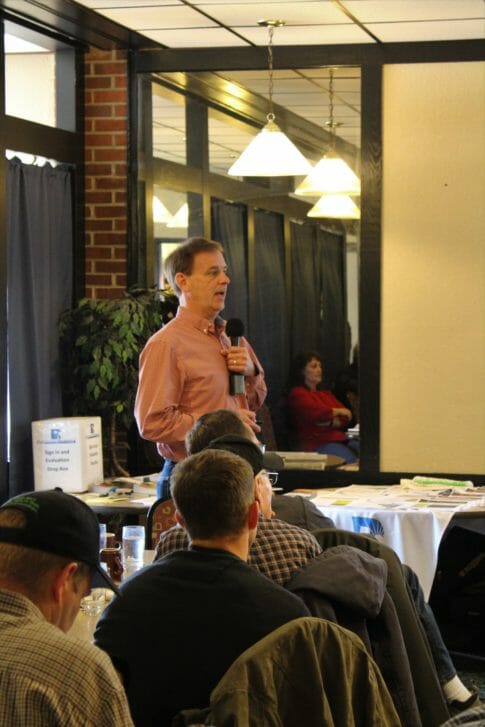 Adding cover crops to his no-till system was an easy decision for Clark to make because there are no equipment changes needed and he can maintain equipment efficiency. Cover crops also help him attain his goals for increasing overall soil health, which include increasing soil organic matter, reducing herbicide usage, reducing water runoff by increasing infiltration, and reducing nitrogen loss.

Cereal rye is the cover crop of choice for Clark’s farm. He aerially applies the seed into standing corn in late August and terminates only days ahead of planting soybeans in order to maximize growth and biomass. In the future, Clark plans to look into a Hagie high-clearance seeder instead of an airplane to increase the uniformity of the cereal rye stand. Currently Clark does not apply cover crops ahead of corn, but plans to research best practices and start doing that soon.

The second topic Clark talked about was the bioreactor he installed in August of 2015. Bioreactors are pits of wood chips buried near tile outlets where bacteria digest nitrates, preventing them from polluting the rivers and waterways downstream. This bioreactor treats over 300 acres of runoff from Clark’s fields as well as his neighbors’ fields. Iowa State University collected data from this bioreactor and showed it is quite effective in nitrate reduction. On average, it was removing around 50% of the nitrates in the water, and upward of 100% if the nitrate level was low to begin with. 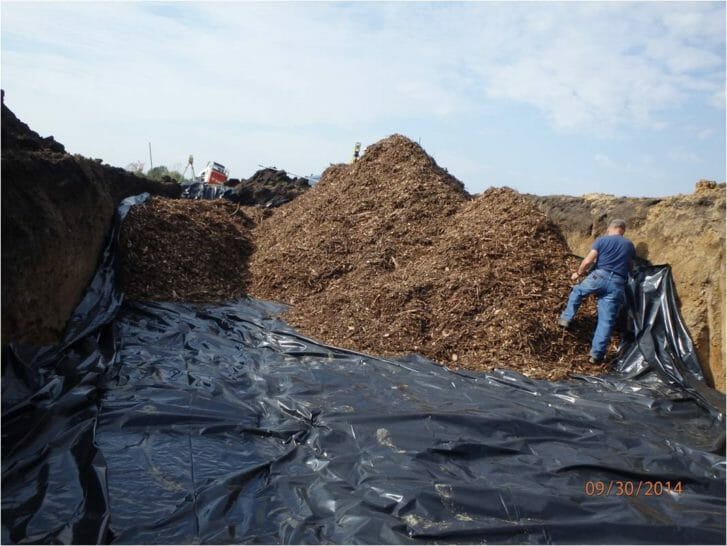 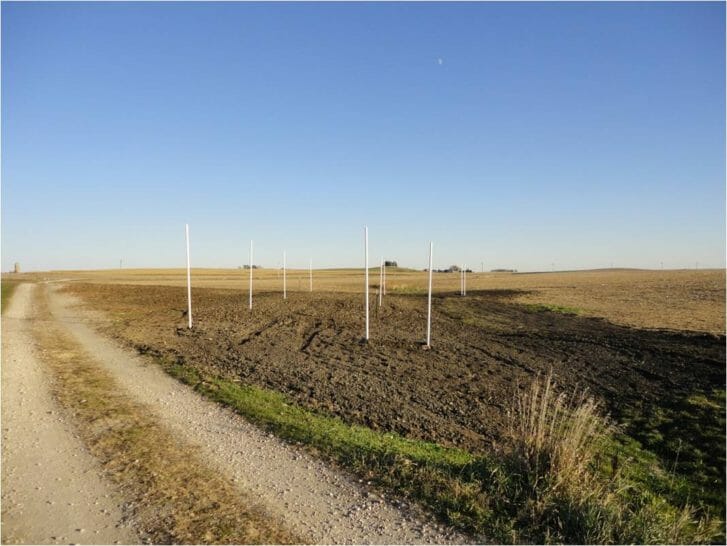 After Clark’s presentation, Doug Adams, a farmer and a soil health technician with the NRCS, spoke. Doug presented his experience with no-till and cover crops and finished with a soil health demonstration called a “slake test.”

Doug is a big proponent of no-till. “Park the Plow,” he says at the beginning of his presentation, explaining that you don’t have to cultivate in the spring and that soybeans do not respond to tillage. Like Clark, Doug uses cover crops on his fields and sees great benefit in the form of reduced weed pressure. Planting into tall cereal rye – sometimes taller than the front tires of his planter tractor – prevents weeds from growing and reduces his herbicide costs. It also reduces costs compared to conventional tillage; cover crops cost Doug on average $34 per acre but (using Iowa State estimates) a conventional system costs more than $46 an acre. 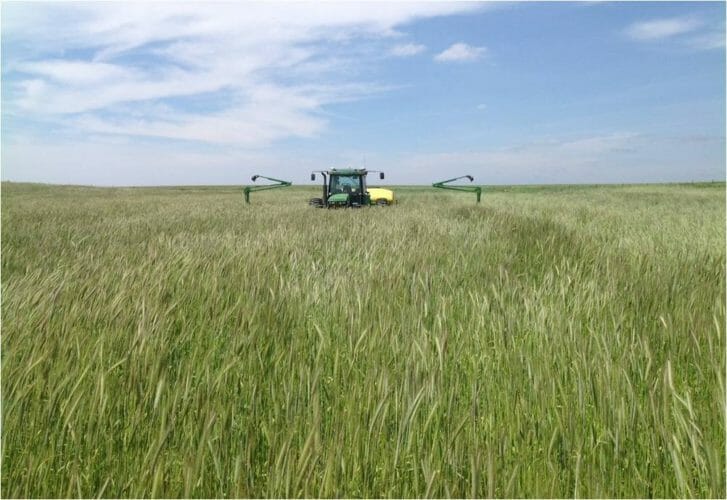 For a demonstration of soil health, Doug and his associate Patrick Chase performed a slake test on two different soil samples: one from a conventional field and one from a no-till/cover crop field. A slake test takes an air-dried sample of soil and submerges it in water over a screen, demonstrating how well a soil can withstand the uptake of water. The conventional-till sample started dissolving almost immediately, showing that the soil had no structure to keep it together and resist erosion. The no-till sample, however, barely dissolved at all and its water was perfectly clear even after five minutes of being submerged, showing that it is resilient against erosion and has a healthy structure. 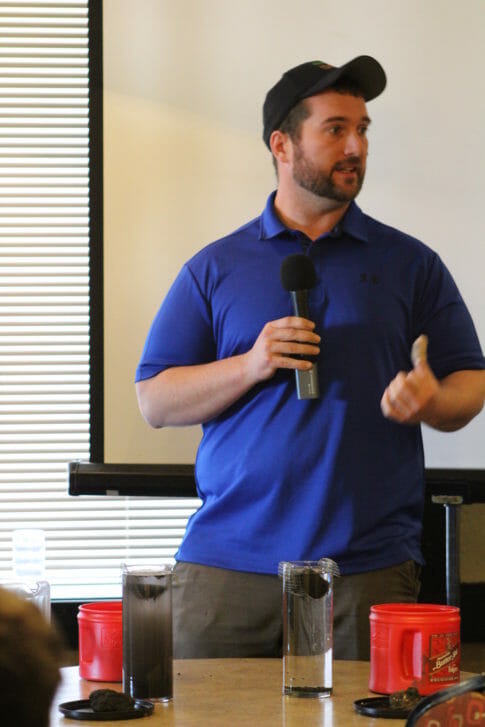 Patrick Chase, NRCS, performs a slake test. The sample on the left is from a conventional tillage field and shows its lack of structure.

After that demonstration, it was time to head outside and observe the rainfall simulator. Patrick and Doug turned on the rainfall simulator which rained over three different treatments. The treatments included a perennial planting (CRP), a tilled field and a no-till/cover crop field. The rainfall simulator shows water movement both over the soil surface and through the soil as infiltration. After 5 minutes of rainfall buckets of water showing the overland flow versus the infiltration were examined by the crowd. Less water flowed off the CRP and the no-till/cover crop fields but more infiltrated. The water infiltrating the perennial treatment was clear, the no-till/cover crop treatment had some surface runoff and it was a light brown color but the infiltrated water was clear, similar to the perennial treatment. The most striking was the water running off the tilled field which was dark brown and three times as abundant from surface flow as to the bucket of infiltrated water. Then Patrick flipped the tilled field and the no-tilled field soil on top the ground to show how well water had entered the two soils. Attendees were surprised to see that the tilled field was dry on the bottom but the no-till/cover crop insert was fully saturated. A younger farmer called over his mom and dad to take a look and touch the difference between the two soils. The difference was distinct and reinforced how soil with a good structure from reduced disturbance and year-round living cover can better infiltrate water providing plant available moisture when crops need it most.

Out at Clark’s Field

Once the presentations were finished, it was time to head to Clark’s field. There we saw his cover crops starting to come through. The cool temperatures this spring have slowed the cover crop growth from what it normally is, but the rye is growing and there is a good stand underneath the corn stalks. Sarah Carlson, strategic initiatives director for Practical Farmers of Iowa, dug up some rye and showed that even with limited top growth of the rye, the root structure is well established and working well. 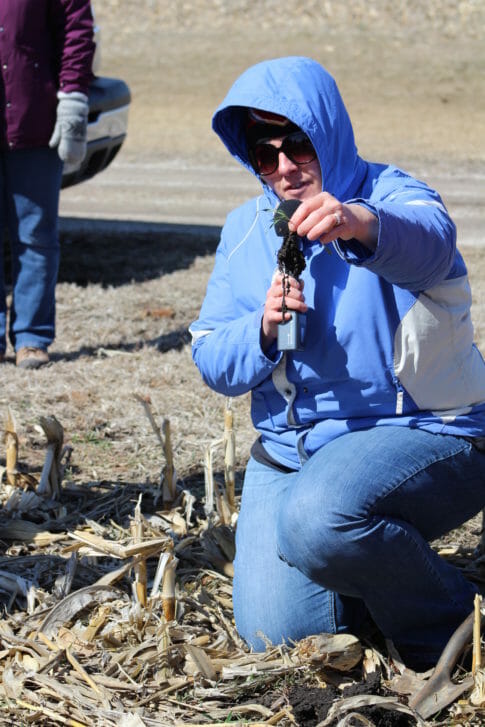 Sarah Carlson, strategic initiatives director at PFI, shows a rye plant to attendees. Even with a couple inches of top growth, the roots are already very deep.

Lastly, Clark showed us his bioreactor. The sheer volume of water coming through the tile lines was staggering and demonstrates how much runoff tile lines send down the river. The previous day he had adjusted the gates to fill the bioreactor more than usual, and despite that the amount of water needing to bypass the system was surprising.

Today’s field day showed farmers that integrating no-till on their farms and adapting cover crops can be an easy process with great benefits.

Thank you to Clark Thompson for hosting, and thank you to Doug Adams and Patrick Chase for presenting at the field day. Keep an eye on our website for our Field Day Guide 2018 showcasing all the field days Practical Farmers will hold this summer!