Our fourth field day, as part of our 2018 Cover Crop Caravan series, was hosted by Bill Frederick on April 3 in Jefferson. On this snowy day, 30 people gathered in Bill’s heated shop to hear from three young farmers who’ve had success integrating cattle into their cover crop systems. Bill, and his friends Dusty Farnsworth and James Holz, all farm in west-central Iowa and each have uniquely used cover crops and cattle to add value to their operations. Each farmer shared with the audience the environmental and economic benefits they’ve experienced. 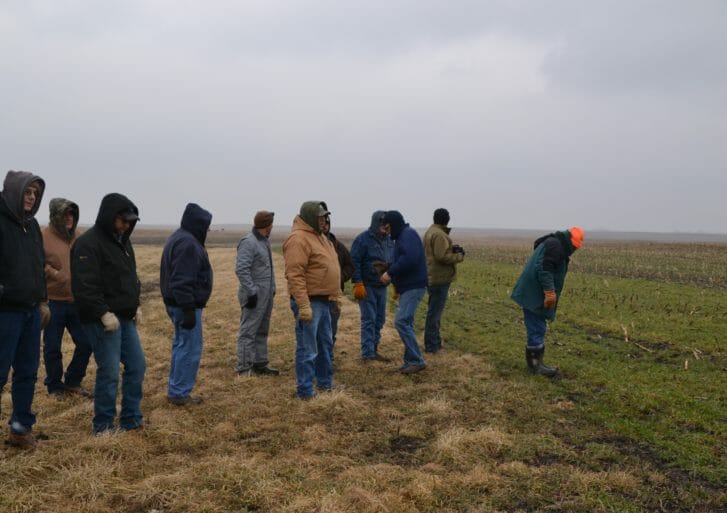 When it stopped snowing, field day attendees checked out Bill Frederick’s cereal rye growing on April 3, near Jefferson. Bill calves on this pasture on the spring, which alleviates calving in a muddy lot and improves calf health. 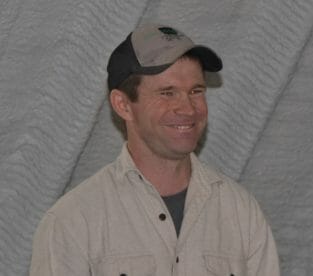 Bill Frederick is a big proponent of grazing cover crops. He and his family operate a diverse farm, that includes small grains in addition to corn and soybeans. He harvests small grains in mid-summer, which provides a large window to grow additional forage that his cattle can graze in the late summer and fall. His mixes have included oats, turnips, kale, winter wheat, triticale and cereal rye. Bill uses a rate of 1 to 1.5 bushel per acre when seeding cover crops; a higher-than-normal rate because they will be used for grazing.

“Any time you don’t have to start a tractor and feed hay is a win in my book,” said Bill, while he explained that cover crops provide him grazing opportunities at times when he would normally be feeding hay. Bill figures it costs him $1.25 per head per day to keep a cow if he’s doesn’t have cover crops to graze. That figure can add up quickly. Using this figure for his 50 cows adds up to $1,875 per month. The last two years he’s grazed cover crops for 74 days each year – between September and May – which replaced $4,625 in winter feed each year. This number does not take into consideration the cost of cover crops and application, which costs Bill $25 per acre. The discussion of hay prices came up and attendees unhappily shared that hay is selling for $120 to $160 per ton currently. This makes the prospect of saving on hay even more attractive.

For the last three years, Bill has participated in an on-farm research study to calculate the economic impact of grazing cover crops on his farm. “I love cover crops and I love cows and was excited about this project because up until this point, no one had the numbers,” explained Bill. As a result of the study, Bill was able to find out his economic gain per acre ranged from $1.56 to $19.72. These numbers were generated by using a tool available on Iowa State University’s Ag Decision Maker website. This study helped pinpoint exactly where the most costs associated with grazing cover crops were incurred – whether it’s the cost of establishment, termination, or labor – and how to tweak management to make the most profit. Another year of data from this study will be available later in 2018.

Dusty has experimented with diverse rotations; planting small grains, cover crops and row crops. Oats and wheat provide a farmer with options – they can be baled, harvested for grain and sold to someone making hog feed, or grown for straw and grazed. After a small grain, Dusty has seeded clover in late August which provides weed suppression and dove hunting opportunities in the fall. 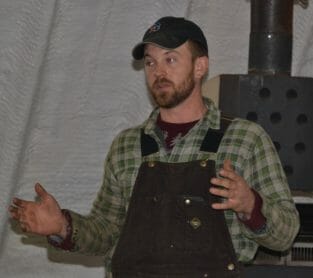 Producing more forage is a priority in an area of Iowa where it is hard to come by pasture land. Dusty has 45 cows and only 25 acres of permanent pasture, getting by with this because he plants cover crops (which could be considered forage annuals) for grazing after small grains. “With a diversified system, you just need a little bit of permanent pasture for the three months you don’t have anything else to graze,” explained Dusty. He also uses his permanent pastures as a “grazing corridor” so cows can easily move between forage sources. Dusty recommends seeding down the worst parts of your farm that never make money to become your grazing corridor. Another benefit of having cover crops to graze is the relief provided to your permanent pastures from grazing too early or too heavy. This relief can effectively double or triple your forage production in perennial pastures.

Dusty recognizes the biggest barrier to this system is fencing, but he doesn’t think it’s as big of an obstacle as it is made out to be. “It took me one and a half days to string fence wire, and I didn’t have to use a tractor to do this work,” emphasized Dusty. He did acknowledge that the Environmental Quality Incentives Program (EQIP) through the Natural Resources Conservation Service (NRCS)  has helped him achieve financial stability because they offer up to $150 per acre cost-share for acres in transition to organic.

Dusty’s future ideas include rigging an air seeder to follow a front mount cultivator in order to get cover crops growing as early as possible. He also thinks people will start to go back to planting in wide rows. With early establishment and plenty of sunlight, the forage production potential of cover crops is tremendous. The thought of grazing more tonnage excites Dusty, “Anytime the cow can do the work for me, I take advantage of it.” 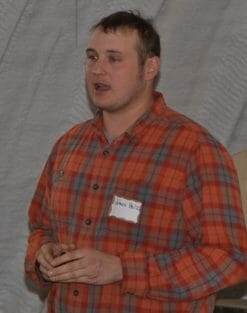 James Holz first planted cereal rye five years ago, starting with 20 acres. In the fall of 2017, he drilled 320 acres. This 300 acre increase is due to a plethora of benefits James has experienced in his cattle herd. Primarily, James makes ryelage on his cereal rye fields, but also grazes some of it. Ryelage is cut after joint stage, which falls around Memorial day. Ideally, it’s cut when there is one week with no rain in the forecast. James bales the rye that cures and chops the rest. He gets 2-3 tons per acre from baling and 7-10 tons per acre (as fed) when making ryelage.

James told the group that ryelage contains 70% of the nutritional value of corn silage. He adds it to his total mixed ration (TMR) as a forage replacement which is fed to stockers and it’s worth $20-25 per ton. James raises groups of stocker cattle he buys from the southeastern US; they come to his farm unvaccinated and at high risk for disease. “I’ve seen better performance when my cattle are raised in fields versus in a lot, which is contrary to what most believe,” reported James,  who has seen less lameness, less footrot and gains of 2.5-3.0 pounds per day per animal on his cattle raised in fields of cereal rye.

In addition, planting a cereal rye cover crop allow James to get by with only one herbicide pass instead of two, which saves him $25 per acre or more. Furthermore, his soybeans yield 60+ bushel per acre after a ryelage crop. Bill concluded the field day with a key take-away, “The way you make money from cover crops is from decreased inputs, not increased yields.” 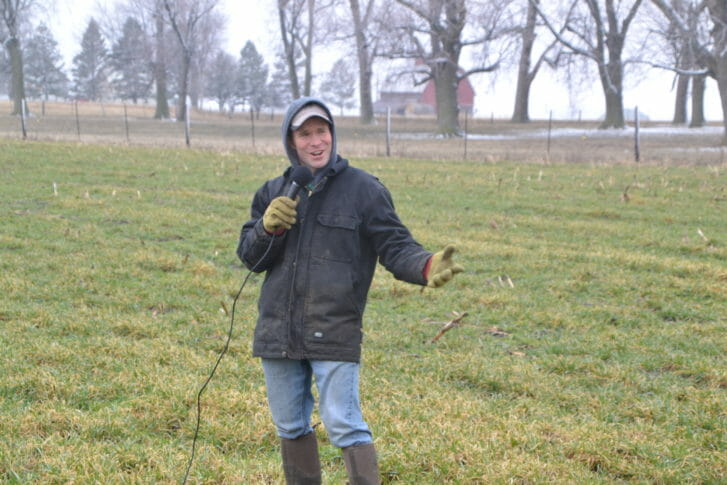 “The way you make money from cover crops is from decreased inputs, not increased yields,” said Bill Frederick, who grazes cover crops to save on hay expenses.

Thank you to each farmer and the Frederick family for hosting us and sharing your expertise.  Thanks to the Iowa Department of Agriculture and Land Stewardship for funding this event.