Kate Edwards got her graduate degree in agricultural engineering with the desire to help make farmers’ lives easier. She eventually ended up in the Twin cities as an environmental consultant. Then she decided she’d rather be walking to a barn than to an office and decided to start on the journey to figure out what it would take to be a farmer.

Kate wanted to farm on the hills outside Iowa City close to where she was born. But, her land access options were limited. In the spring of 2010 she quit her job and called her grandma. When Kate told her grandma that she wanted to farm the response was, “We farmed so our children and grandchildren didn’t have to.” But Kate really wanted to farm, so she did it anyway. At first, she wanted to get into row crop farming, but that wasn’t a good option since she didn’t have the option of farming with family. She started farming vegetables instead with $5,000 worth of capital, one acre, and the knowledge from being a gardener. She tried to do a farmstand, but that fell through so she chose a CSA vegetable share (CSA stands for Community Supported Agriculture). After starting with 11 families, eight years later she has a 200-family member CSA and a unique ground lease. 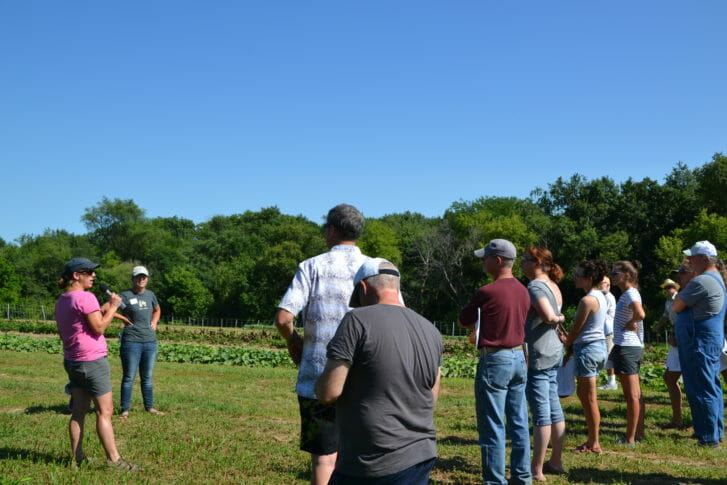 Landowner Rose Roelf with farmer Kate standing to her right

How She Found the Land

In 2015 Kate was looking for a new place to farm. Her neighbors, Mike and Rose Roelf, owned the land Kate was interested in. Kate said, “Rose, can I come talk to you? Would you consider leasing to me?” And Rose said, “Actually, we’ve been wanting to talk to you.” Kate had no idea that would happen, but this conversation precipitated the start of moving Wild Woods Farm to its new location on Rose’s land.

To start with, there was only green space – no house or farm infrastructure like a greenhouse or barn. The hilly land, the Roelfs had just purchased at the time, is highly erodible and was in tough condition after being farmed with row crops for the last 30 years. So, when the Roelfs and Kate laid out the design for the Roelf’s house, Kate’s barn, greenhouse and surrounding fields they included provisions for the lease to allow Kate to build equity and security while fulfilling the Roelf’s conservation practice desires. The lease has a conservation plan and agreements for using cover crops, eliminating non-organic  pesticide use and using crop rotations. Basically, all the things it takes to do an organic transition without requiring certification.

Kate designed the pole shed or barn, which includes a walk-in cooler, packing shed, equipment storage area and her apartment. She also owns the barn, which is helping her build equity since she doesn’t have to pay more rent for that. The barn sits on the hilltop next to the Roelf’s house. Kate got a FSA microloan to put up the walk-in cooler, and the greenhouse, both designed to be portable structures. At the field day Kate shared how her field layout worked in conjunction with the NRCS conservation plan. Because the ground is highly erodible, Kate’s field layout goes mainly along the ridgeline of the property. 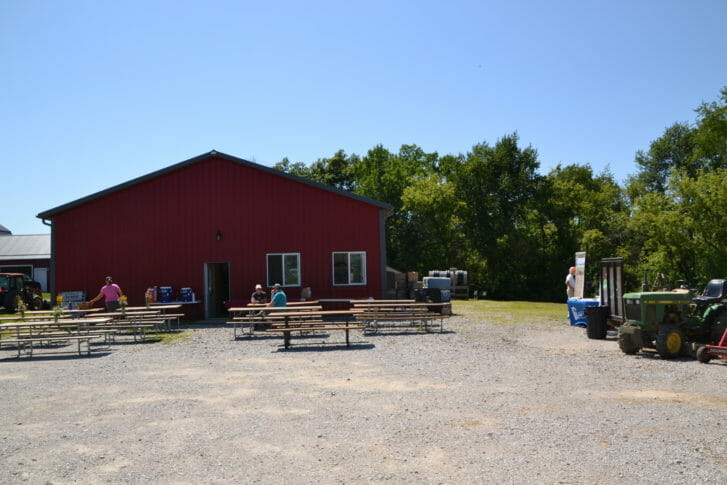 The “barn” as Kate calls it includes a walk-in cooler, packing area and Kate’s apartment 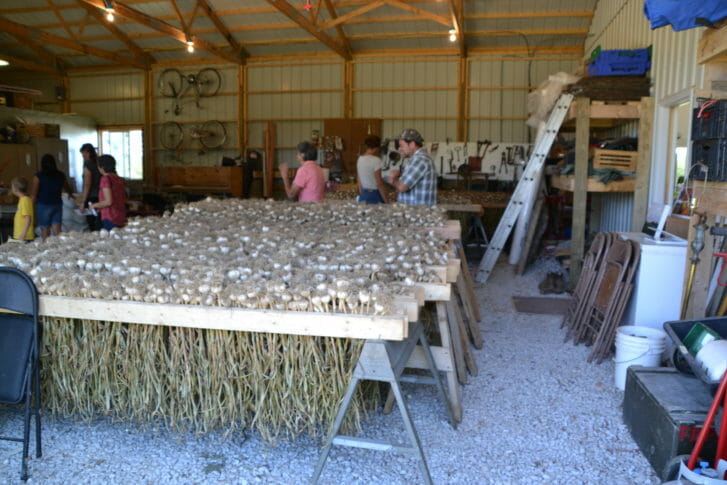 Garlic curing in the packing shed

For Kate, one of the big challenges of farming this location is the field slope. Kate and the Roelfs didn’t want to have erosion potential in the winter so before the fields were used for produce, the bean fields were overseeded with oats. The alfalfa stand was thick in the heavy clay soil so when opening up the fields, the first year she had to use a moldboard plow in the spring. That, along with all the rotations and cover crops affects how well the soil stays in place. Kate mentioned during her talk that they’ve had a little bit of alfalfa come up, but it’s not necessarily a bad thing. She’s noticed that every year since she’s been farming these fields, there’s a different weed like buttonweeds, grasses or purslane that show up. 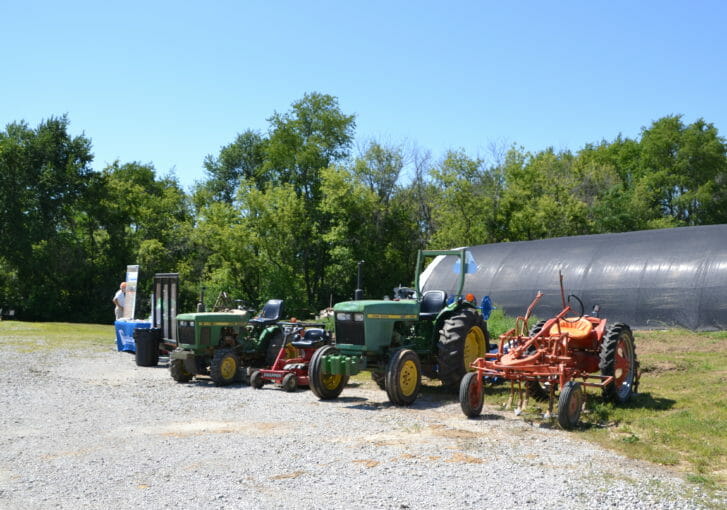 Some of the equipment Kate uses at Wild Woods Farm 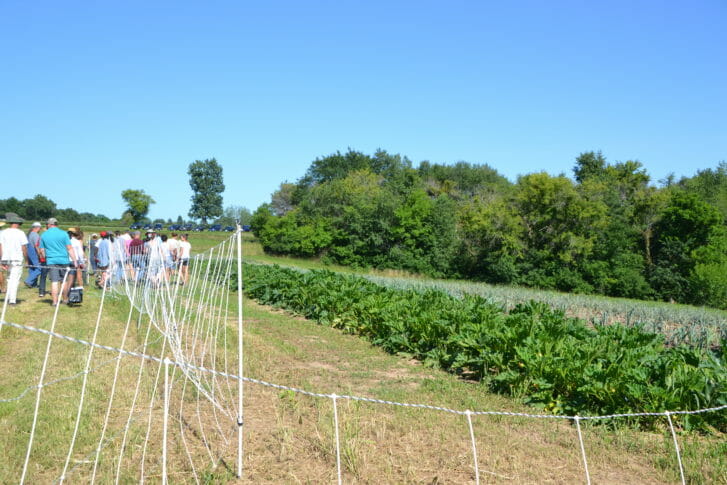 This year has been challenging to manage for planting, weeding and pests because of the extreme weather conditions. Kate said, “Our attention is in a lot of different places this time of year. We spend a lot of time weeding our long-season crops.” Managing 30 crops with 100 different varieties requires a lot of coordination.

But even with all the challenges, Kate’s biggest reason for  farming in Johnson County is because she was born near there. At the end of the field day she said, “I’m nostalgic for the hills… I love this section of Johnson County.”