Last year, when Nelson Smith’s neighbor dropped out of a Treffler tine weeder field day, Nelson filled the gap and hosted the event. The trailer that brought the German-built cultivator that day left empty, and its use on the farm lead Nelson to host another field day in 2018, this time with Practical Farmers of Iowa. 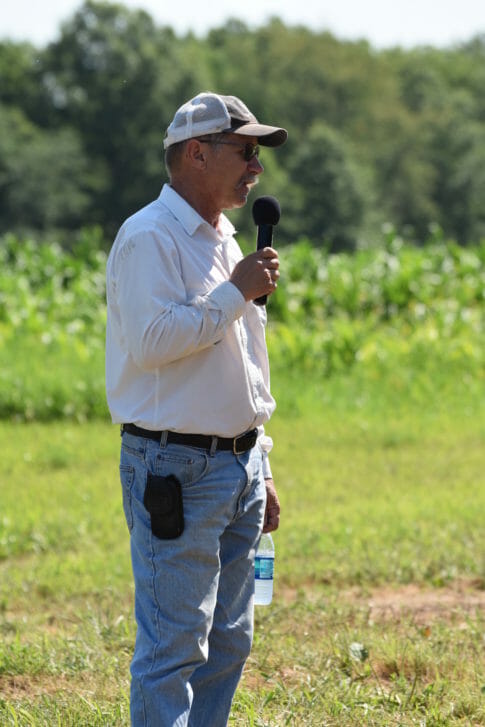 Nelson’s father began grazing cattle and growing hay on this ground near Brighton in 1962 while Nelson worked in Wisconsin. Nelson came back to the farm and in 1998, after the Smith’s had owned the land for 35 years, Nelson got started in organics with 40 acres of organic soybeans.

“At that time the organic markets were not really well-known. The only market we had for our organic, food-grade soybeans at the time was Japan. So our beans left here they got shipped to the coast and they got shipped to Japan.” said Nelson. “Since then things have changed a lot and there’s a lot more interest in organic, there’s a lot more organic buyers out there. So now our soybeans go from here, down the highway and over to Washington which is about 15 miles down the road. We went from 4,000 miles to 15.” 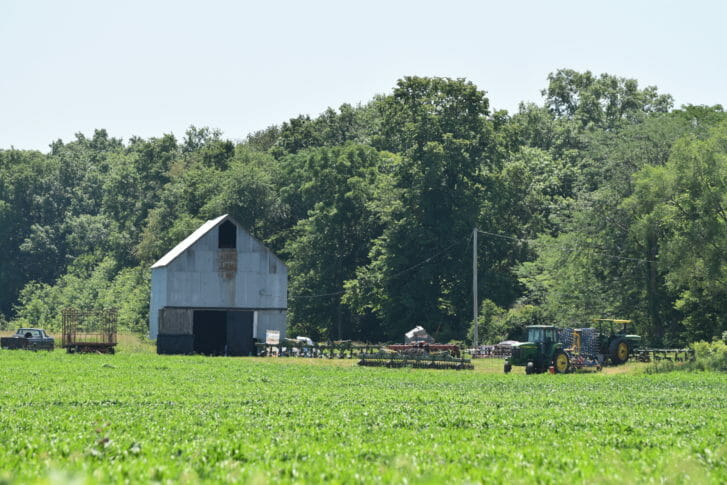 Nelson’s array of cultivators sit outside the old hay barn his father built back in 1966.

To begin the field day, Nelson and field day attendees gathered around cultivation equipment Nelson has collected throughout the past 21 years of organic farming. Nelson use to buy these cultivators for pretty cheap back when many were collecting dust and rust in the back of farmers’ sheds.

Among the equipment was a Lilliston rolling cultivator, which was common in the 1970s, and a front mount John Deere cultivator that Nelson scooped up for $800. Now it’s worth upwards of $4,000. 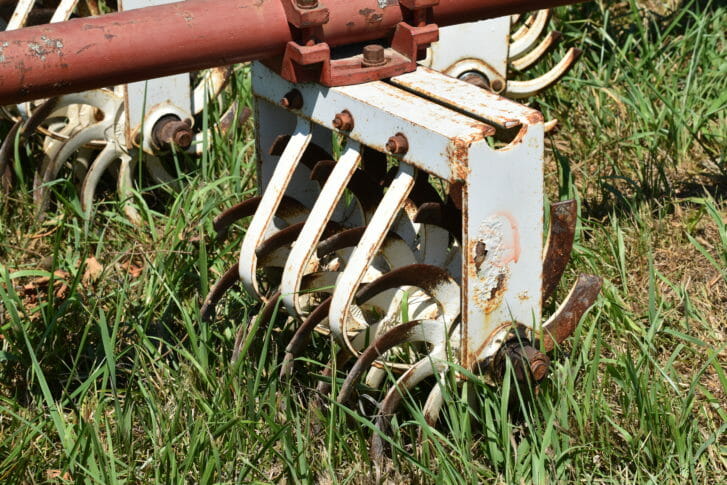 These are the spiders of the Lilliston cultivator which needed replaced when Nelson bought one of these for just $25. 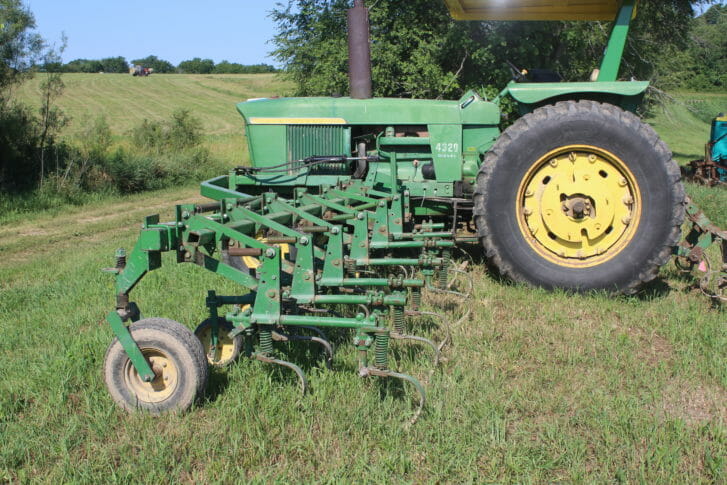 Nelson bought this for $800 and has seen them going for as much as $4,000 now. The guy he bought it from had it sitting in the back of his shed and was amazed that Nelson wanted it for $800.

But it was Nelson’s Treffler tine weeder that stole the show. The 30-foot machine has 324 tines and is changing the way Nelson thinks about weeds. He got the Treffler last summer and has put it to good use thus far.

“I needed a neighbor with a corn and a bean field that they wanted me to try this out on, and then I could try that tension. And if I tore out all the beans they wouldn’t be my beans,” Nelson said. “But I couldn’t get anybody to do that. After I figured it out I had some neighbors that said ‘hey can you come over and do mine?’” 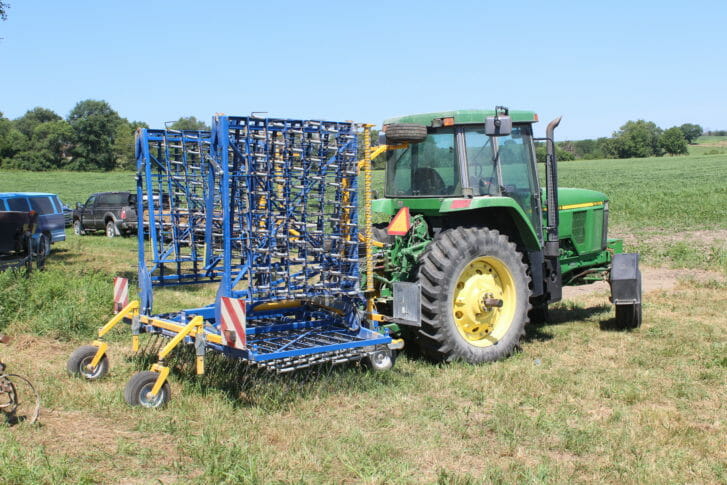 Nelson bought the Treffler tine weeder at a field day he hosted last year. It was the first of its kind in Iowa and one of just three in the U.S. at the time.

After a tour of Nelson’s machines old and new it was time for a break from the hot July sun. Everyone packed into an old hay barn that Nelson’s father designed and built in 1966.

Nelson shared photos and videos of how his farm has operated the last few years. He shared his discoveries after a year of using the Treffler tine weeder and the trials and tribulations that come naturally with farming. He shared what was especially difficult about cultivation.

“Wet years are an organic farmer’s nightmare because you can’t get out there and work on those weeds, but the weeds can still grow.” Nelson says. “They love that wet year because there’s nobody coming out there with a cultivator that’s trying to kill them.”

Many of the things that Nelson shared about improving organic crop production were as simple as paying attention during cultivation.

“Some of the guys get nervous and they turn around, well if you turn around you’re going to pull the steering wheel, you pull the steering wheel you’re going to get off the rows and take 12 rows out. That’s what they call ‘cultivator disease. You don’t text while you’re driving you don’t text while you’re cultivating because you need to pay attention.”

Just to the north of the field day location was a weedy bean field next to a completely clean bean field. The group took a hay rack ride through the weedy field and into the clean one for further discussion.

“That field and this field were planted exactly the same date, hours apart and they’ve had exactly the same cultivation, the tine weeding and everything else.The only thing different is that this had the rye cover crop.” 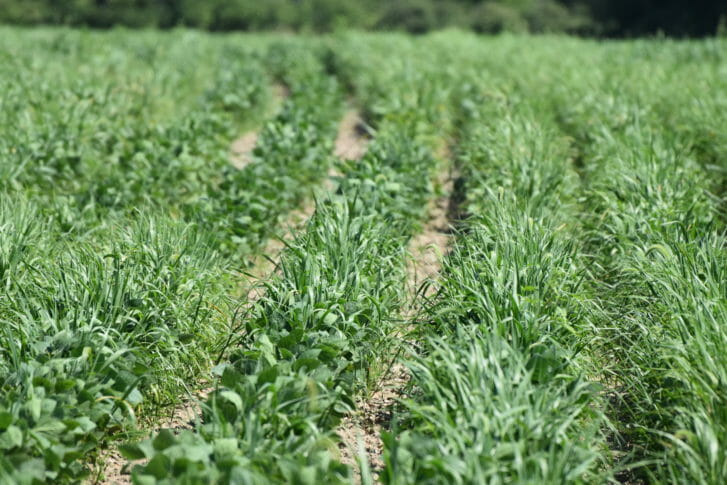 The weedy bean field was directly north of the field day. 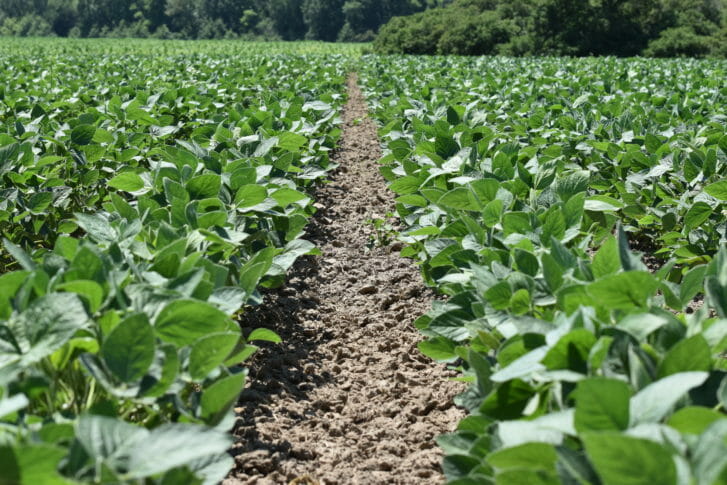 The group took a hay rack ride out to this clean bean field. The only difference between this field and the weedy bean field was cereal rye was planted into corn the previous year.

The clean beans had a solid stand of rye in spring that Nelson disced not once, but three times. Why? Because the Treffler tine weeder can handle a ton of residue as long as it’s broken up. The clumps of rye residue pass right through the tines. It’s a great example of one of the many little hammers that organic farmers have at their disposal.

Nelson has had some bad deer pressure or as he likes to call them “long-legged short tail rats.” In fact, all the beans that the group saw in the field had been eaten at some point. He has some fields that are never in corn or soybeans because the deer pressure is so intense.

Between “cultivator disease” and the “long-legged short-tail rats” Nelson has some obstacles he has to overcome.

“If you take 15 percent off of your 170,000 you’re down a ways and then you add the cultivator disease, you add the deer damage in there and that can be another ten percent so you can be down to 120,000 of actual plants. Iowa State University says all you need is 100,000. I want more than that. Part of organics is the canopy and to canopy you need a lot of beans in there you need to get them up and get them over there. That canopy will help you more than anything else.”