Scott Shriver of Shriver Farms started with 40 organic acres back in 1998, and today he farms 2,000 organic acres. After 20 years of organic weed control in corn and soybeans, Scott shared his experiences with 115 attendees at a recent PFI field day. Shriver Farms was homesteaded by Scott’s great-grandfather in 1876. Scott came back to the farm in 1994. In 1998, Scott bought some ground after reading up on organics. Forty acres of this new ground was able to go right into organic production, so Scott decided to give it a go. It took the next ten years for the rest of the farm to transition to organic production.

“It’s a learning curve, technology has changed a lot in that ten years,” Says Scott. “It would have been a disaster if we tried to transition everything all at once.”

The Shriver Weed Control Fleet
Much of the discussion revolved around how Scott controls weeds and the equipment he uses on his 1,500 acres of row crops. Scott uses a variety of methods including cultivation, cover crops as mulch for soybeans and flame weeding for corn.

“We’re picking up equipment and learning along the way,” Scott says. “The longer I do this, the more I know that I don’t know.”

It starts with planting. Scott gives a lot of credit to the guidance systems on his tractors to ensure straight rows. “If you can plant in a straight row, that straight row is just that much easier to cultivate.” Scott has a wide array of cultivators and other weed control implements in his arsenal. Each one is used at a different stage in the life cycle for his corn and soybeans.

Videos: Scott showed video of some of his cultivators in action. After the meal, Scott led the attendees outside to look at and further discuss each machine.

One of the more unique pieces of equipment was the flame weeder. For the first time in ten years, Scott didn’t have to use his flame weeder due to a warm May that helped the corn shoot up past other grasses. “These things are a freight train when they’re going,” Scott says.

Scott likes to flame his corn when it’s 12-16 inches tall. He’s tries to flame under the corn canopy. He’s also heard of people who like to burn their corn to the ground as soon as it gets up a couple of inches. Once the field has been burned by the flame weeder, the corn will outcompete the weeds. 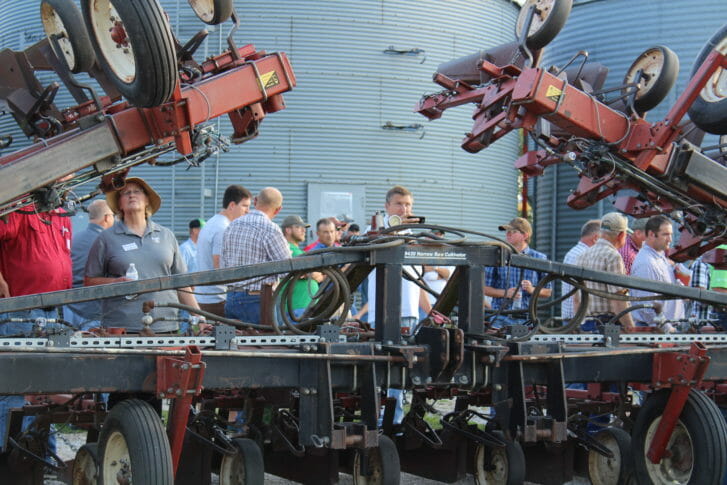 Scott only flame weeds his corn. This was the first year in more than ten years that he didn’t have to use it.

Scott says the effectiveness of flaming depends on two things: speed and pressure. Anywhere from 40-45 pounds of pressure is ideal for Scott, and the speed varies depending on how thick the grass and weeds are. A slow speed for a thicker weed stand is 3-3.5 MPH, while a fast speed for a less weedy field is 4.5-5 MPH. The flame weeder uses seven gallons of propane per acre which comes out to be around $7-$10 per acre. 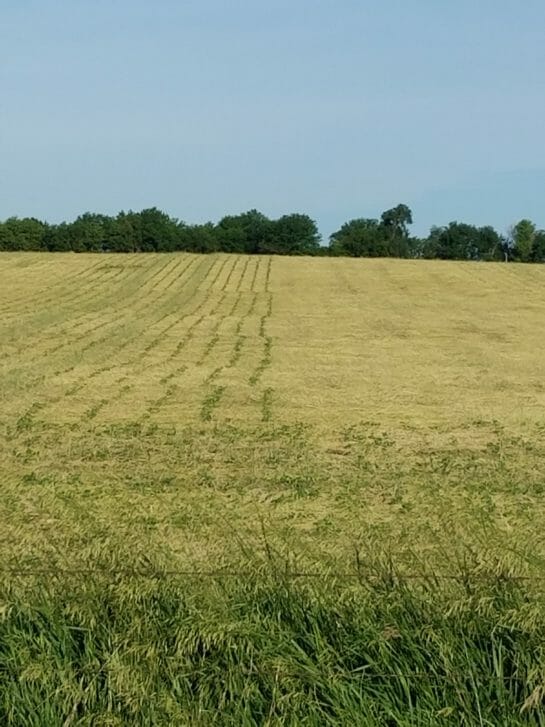 Five days after being rolled this is what the PFI experiment looked like.

On August 2, Scott noticed a difference in the field among the different bean planting dates. The latest planted field was almost free of waterhemp, while the earlier planted field had pretty significant waterhemp pressure. The late planted beans were taller and had a more consistent stand as well. 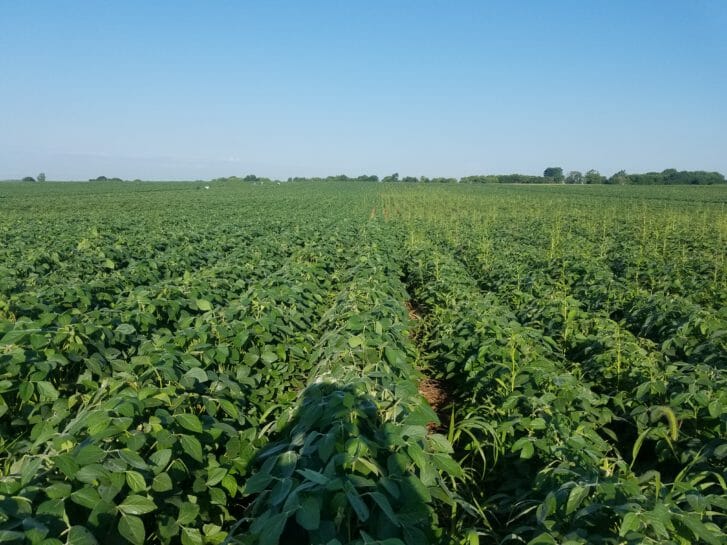 On the left: June 5 planted beans have a better stand and less weed pressure. Right: Waterhemp pokes through the May 23 planted beans. Both were rolled on June 5.

Scott used Aroostook rye which is an earlier maturing variety that enables an earlier roll and planting date. It was the first year he’s used Aroostook rye after using VNS (Variety Not Stated) rye for many years. He noticed Aroostook didn’t stand up as much after getting rolled. With VNS rye Scott mentioned that you may have early and late varieties mixed together. Since the varieties aren’t tracked, it’s hard to know what you are planting. It can be hard to manage and get a consistent stand.

When Scott rolled the rye on June 5, the first planting of beans was already 6-8 inches tall, while the second planting was 4-6 inches. The third planting was still in the ground. After the rye was rolled, some of the taller beans had their stems snapped. Scott wonders if the weed pressure from the earlier plantings was from a thinned stand caused by these broken stems. 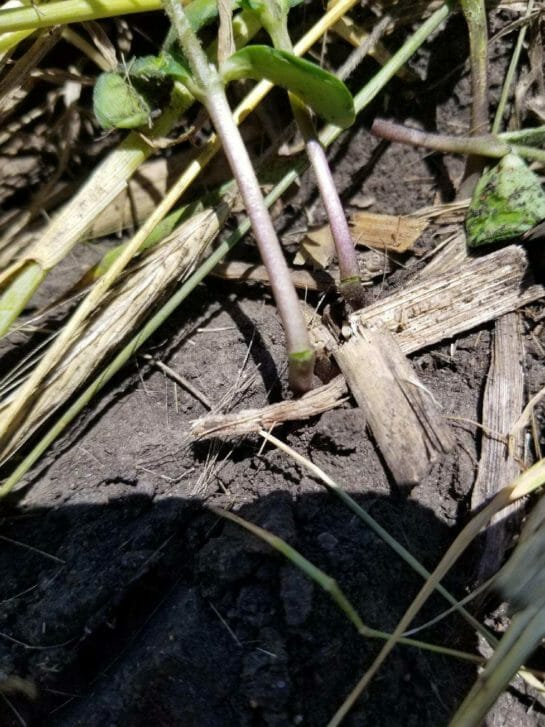 These beans were the middle planting date (May 23) and were four to six inches tall when they were rolled.

Ideally Scott would blind harrow four to five days after planting. Out of 19 fields Scott was only able to get in and harrow in four of them. There’s a pretty small window when he can get into a field and blind harrow. If he knows the rain is coming on that fourth day he’ll harrow on the third day. If it rains on the third day he may wait until the crop is big enough for him to tine weed or rotary hoe it.

If Scott gets in and blind harrows around that five day mark, in an ideal world he’d have the crop emerge and get big enough for the rotary hoe or the tine weeder when the crop is an inch or two tall. A lot of times these passes are five to seven days apart.

“I do think timing is crucial early cultivation getting those weeds when they’re not even emerged, they’ve just germinated and they’re in that white root hair stage,” Says Scott. “That all sounds good, and then again Mother Nature comes along and you don’t get into the field until two weeks after you plant.”