There’s something hiding in the prairie grass at Dwight and Bev Rutters’ 640-acre farm northwest of Spencer – birds, frogs, the metal dinosaur sculpture. Dwight said, “I keep him around because he don’t eat much.” 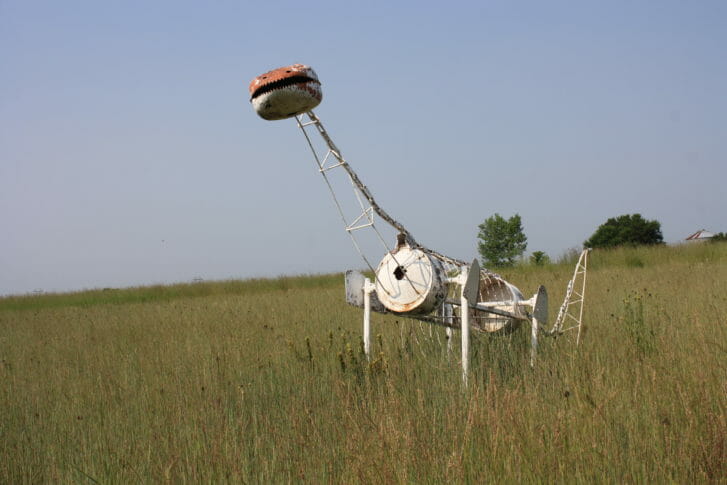 Dwight’s sense of humor and knowledge of all things prairie kept the attention of the field day crowd as both him and his wife, Bev, gave a tour of their expansive prairie and wetlands at The Prairie Flower. Over 40 people attended the morning field day on August 9 to learn about the prairie farming business. Dwight led the group on a tractor with a wagon full of people while Bev followed in an ATV with even more people loaded on. 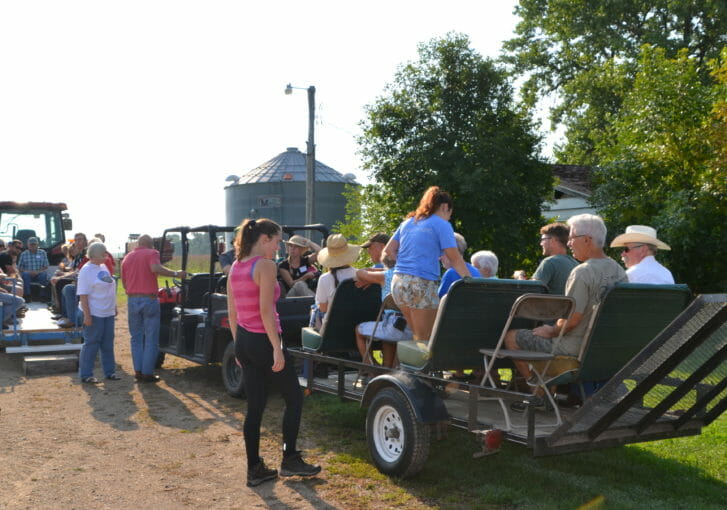 Everyone got loaded on the wagons to tour the acres of prairie. 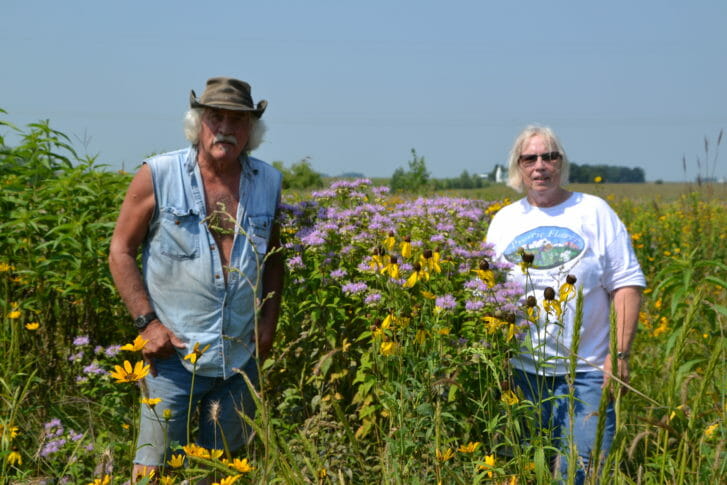 The couple made prairie farming their full-time business in 2002, slowly converting much of the land they had in corn and soybeans back into native habitat. When asked why he started prairie farming at the field day, Dwight said it was because of his hatred of corn and beans. Several folks in the crowd laughed at that. When the Rutters started transitioning their land to prairie, the cost was heavy in seed and labor, but not in the cost of land since they had already paid it off. They used those farm payments to invest in prairie farming. Now, their prairie business provides native prairie and wetland plants as well as consultations for restoration projects.

Dwight broke up the field day tour into a series of stops along the different patches of established prairie. One of the first patches was eight years old with loads of purple and yellow flowers in a grass mix. 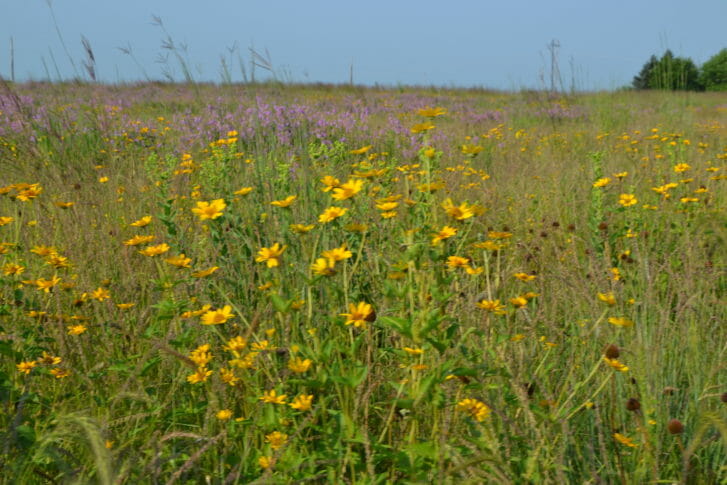 Standing in the mass of blooming flowers, Dwight launched into a story about the first year he seeded it. He said, “Three kids from Ohio that year that wanted to work on the farm. They stayed for four days and went out every morning and afternoon with a large box wagon to fill with hand-pulled thistles.” Dwight laughed, “We thought we’d never see these kids again. Two years ago two of them came back to work for 30 days, and each of them had a Canada thistle tattooed on each arm!” 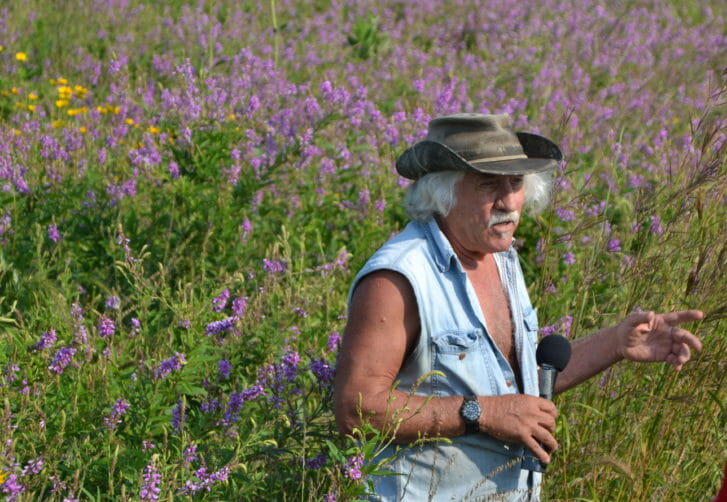 When asked about their seed source, Dwight said that everything grown on the prairie is as local as they can get it. In northwest Iowa, their eco-type includes seed from Iowa, Nebraska and South Dakota, but some comes from as far as North Dakota. Since it’s labor intensive to harvest, prairie seed isn’t cheap. The seed bag sitting in the back of the ATV, as extra seating for the tour, was worth about $600.

The field Dwight stood in was corn and beans before he seeded it into prairie. He said, “The best thing is to seed into soybean ground, around February 20. Throw it on the ground, the less you work the ground the better it’ll be. Say you have it in Roundup Ready corn one year then the next in soybeans. That Roundup will pretty much take care of the weed situation.”

The Rutters also manage weeds, like Canada thistle, bull thistle and brome grass, by mowing frequently and burning. In the first few years of prairie establishment, it’s important to mow in June, July and August when the stand is boot top high. Dwight said, “You can totally change the look of a prairie with fire and a mower.” And, Dwight isn’t afraid to use chemical control on certain patches of the prairie; it can be a useful tool for weed management. He has found that many prairie plants will survive a Round-up application, and that it can help setback invasive weeds. Spray drift, however, is another issue for their farm. 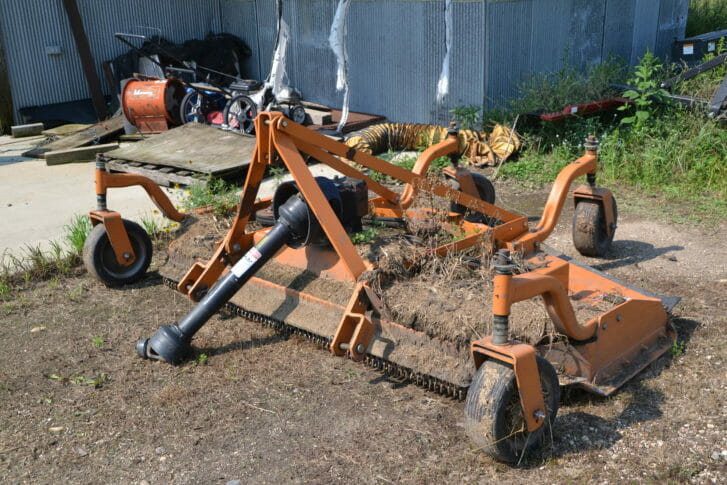 When it comes to prairie farming, you still need some heavy equipment in addition to maintenance equipment like the mower. The tractor Dwight used to pull the wagon full of field day attendees is also used for planting things like prairie cordgrass. 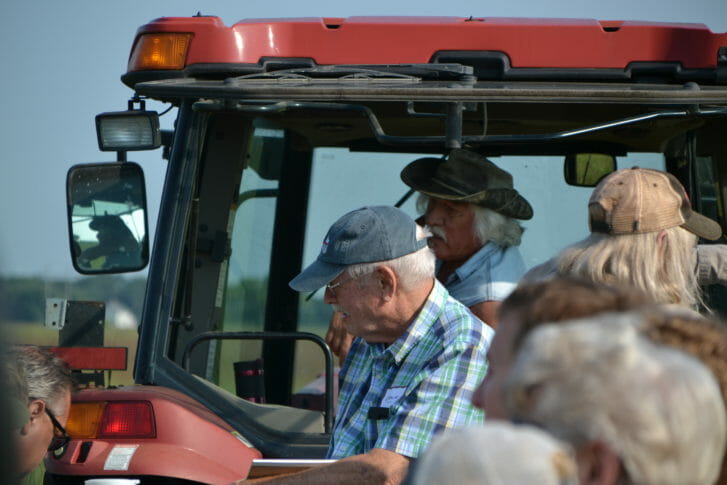 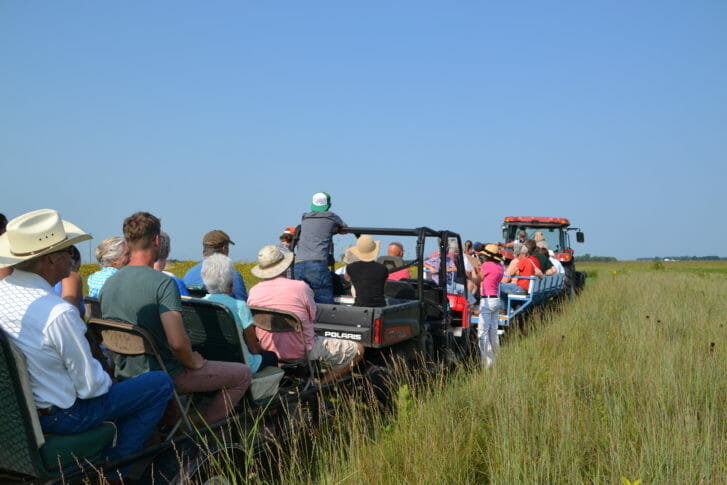 Dwight said, “So if you’re going to plant prairie cordgrass, go out and dig a bunch up. And what I did is I ran through here [the field he stood in during the tour] a couple times, and on the other side is a big patch of cordgrass. I just took a chisel plow, and I made four or five swipes with it, dug up a bunch of the cordgrass up, cut the root into three-inch chunks, threw it down in the ruts made by the chisel plow – every one of them will grow.” 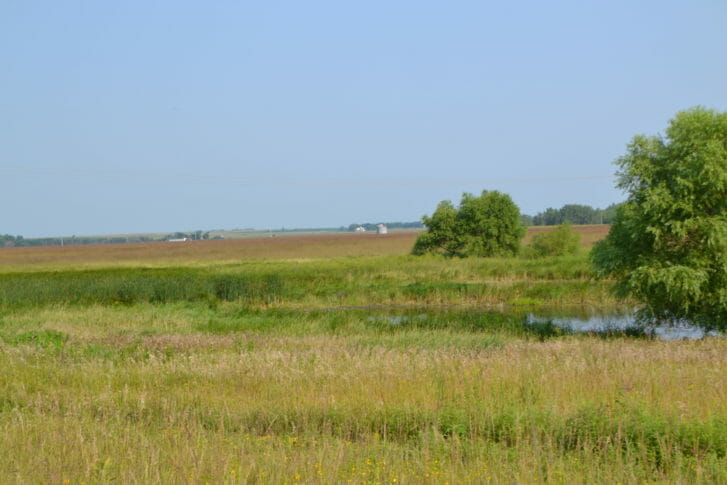 Each patch of plants at The Prairie Flower is a different collection of native flowers and grasses. 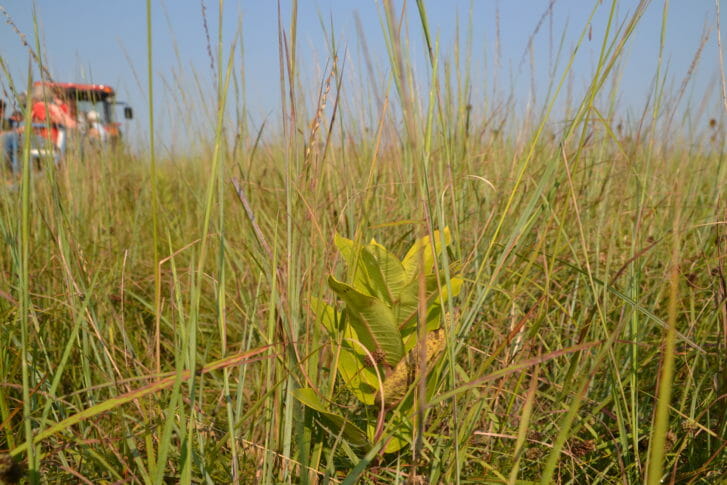 This milkweed plant stands in the middle of a grassy mix. 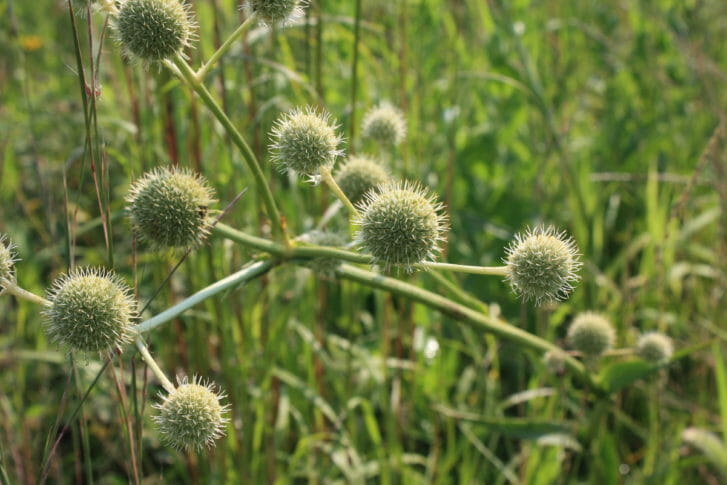 Rattlesnake master (above) and prairie dock (below) are some of the more unique plants grown at The Prairie Flower. 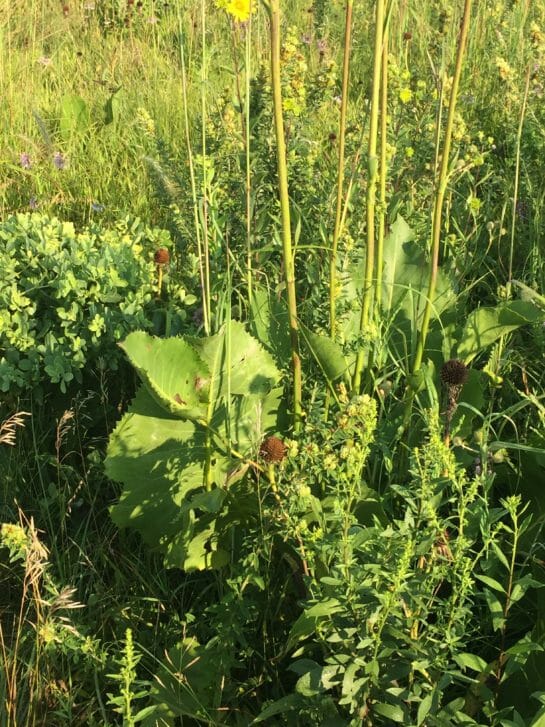 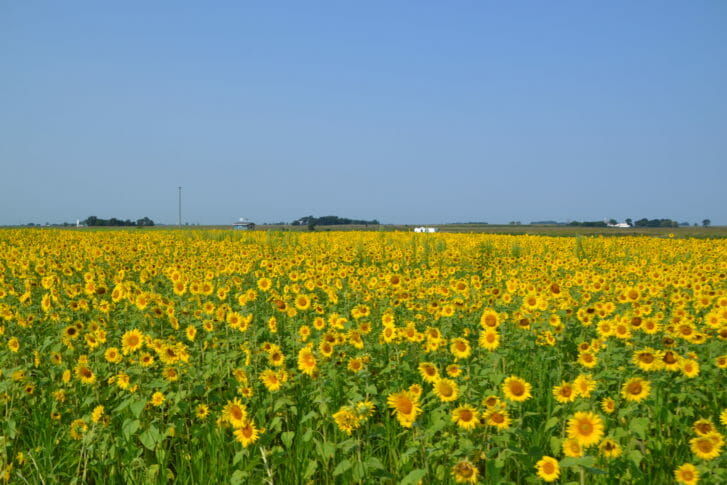 This vibrant patch of sunflowers facing the east, serves as a food plot. 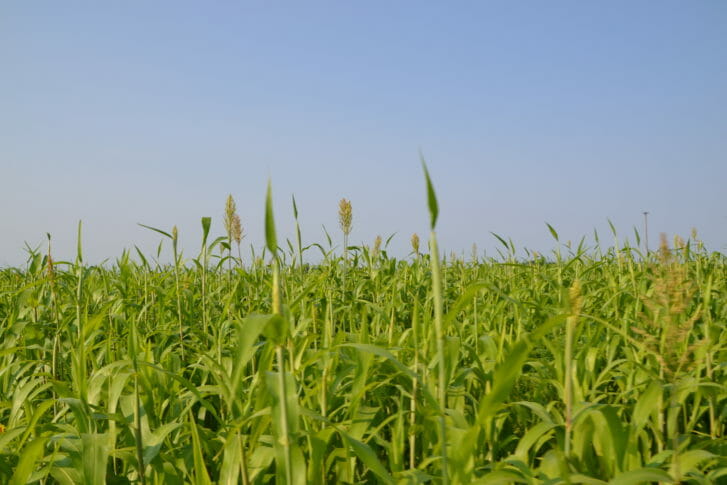 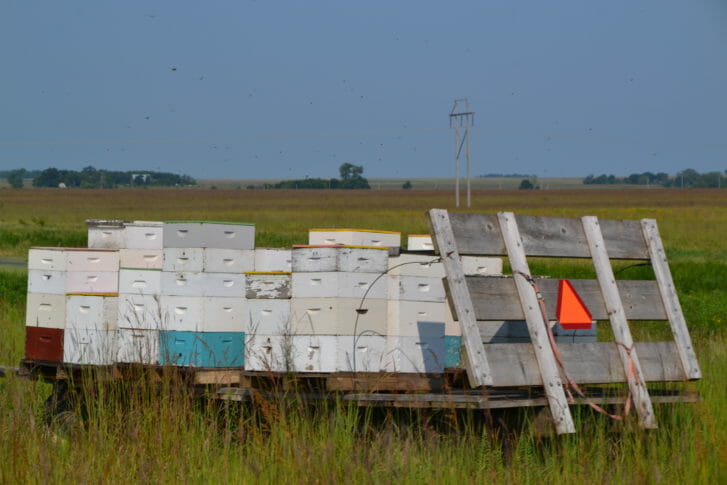 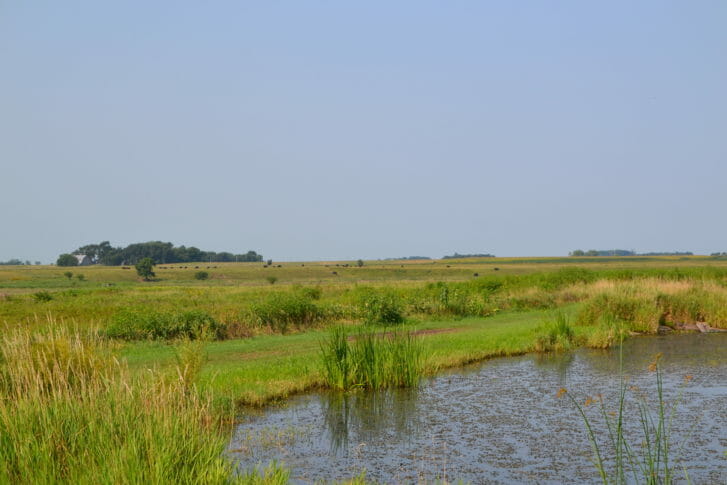 Past the food plots, Dwight stopped at an engineered pond. The middle of it is 17 ft. deep and cost about a thousand dollars per foot of depth. The Rutters have included a series of ponds and wetlands throughout their prairie. Since their land is located along the Little Sioux River, there are some water-heavy areas throughout. 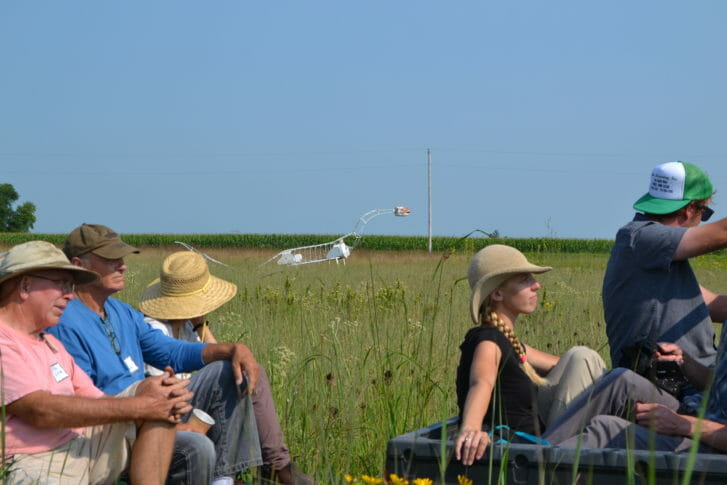 Toward the end of the tour, Dwight showed off his pet prairie dinosaur and answered questions. 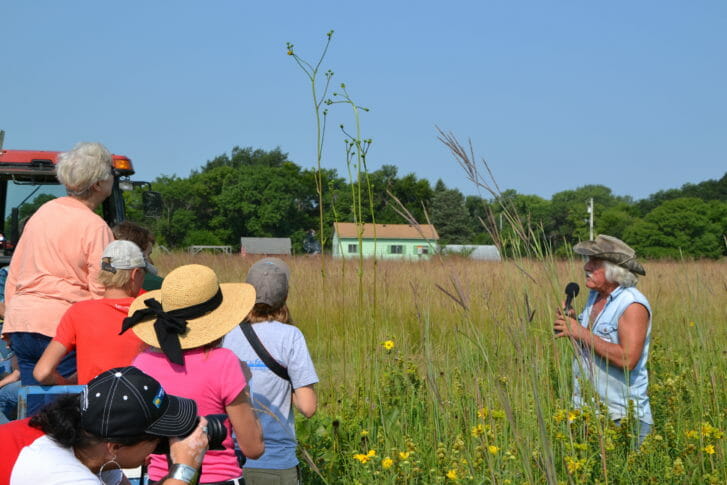 An attendee asked Dwight what he did when a customer buying prairie seed was worried about the establishment of their planting. He didn’t get too much time to answer – Bev takes those calls. Bev said, “In the prairie business you have to hold people’s hands. You have to work with the client so they have a successful establishment. Selling prairie seed is different because people aren’t as familiar with how to get it established.” Harvesting prairie seed by species is labor-intensive, so the price per weight of seed is appropriately high. Thus, for harvesting prairie seed, the income is dense per acre.

To give you an idea of what seed harvest is like at The Prairie Flower, Dwight said it took seven days, if you’re working hard, to hand-harvest the patch of coneflowers in the picture below (harvesting every coneflower seed head). The Rutters are among the largest prairie seed harvesters in the Midwest; it’s important to note that with prairie farming though, yield amounts are in pounds, not bushels. 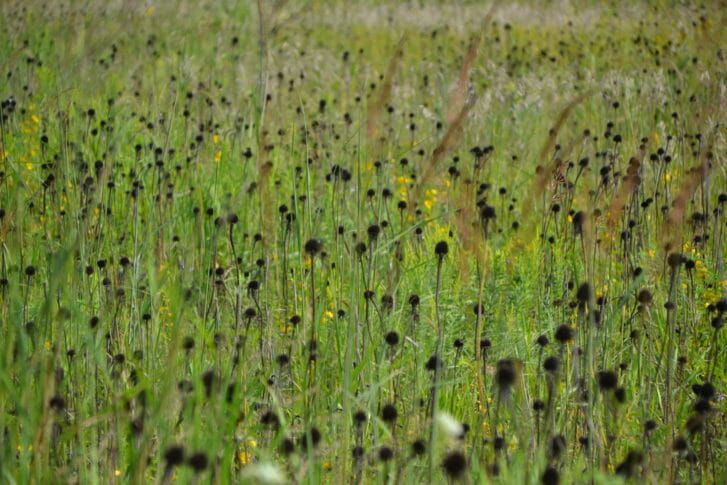 For small but valuable plants, like Dudley’s Rush, Dwight harvests with scissors and a five-gallon bucket, essentially crawling through and snipping each plant. 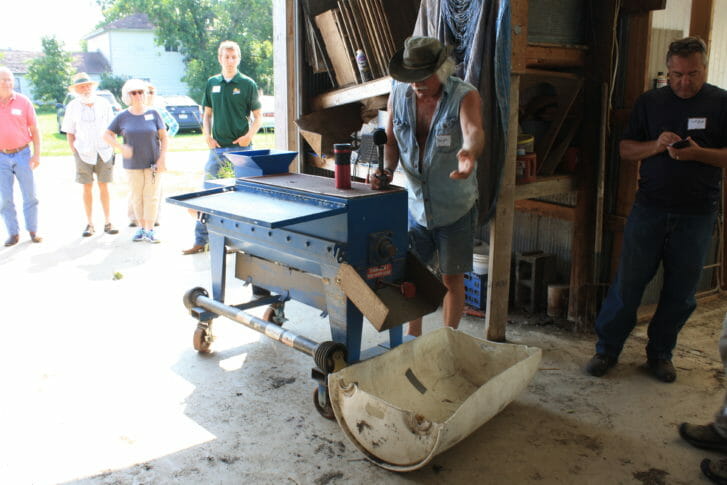 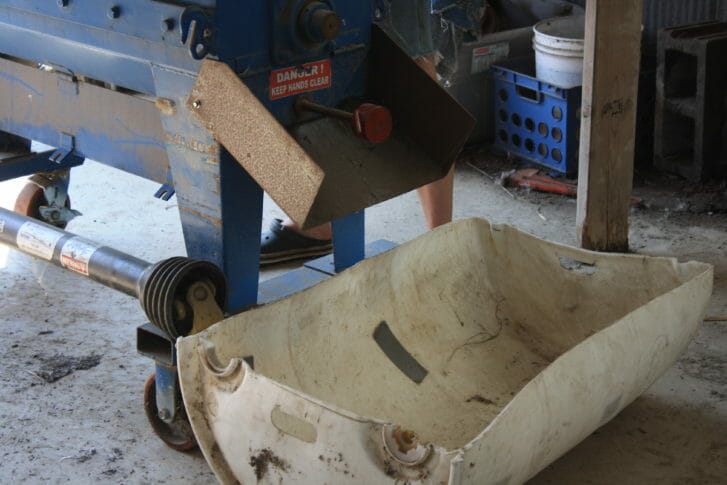 When it comes time to clean the seed, Dwight primarily uses sifting screens, but for some species, like Pale Purple Coneflower and Dark Green Bulrush, a gravity table works well. Dwight said, “It’s just a fan and heavy seed travels to the top and it just shakes and bounces. The good seed goes to the top, the bad seed goes to the side.” 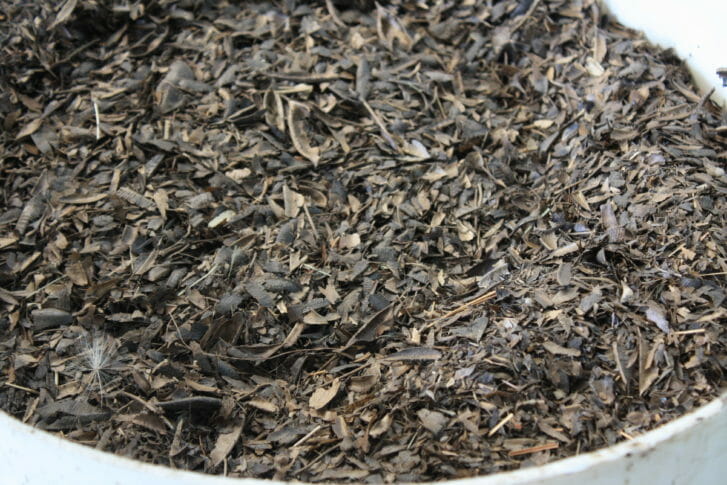 He stores the cleaned seed in barrels and jumbo bags. 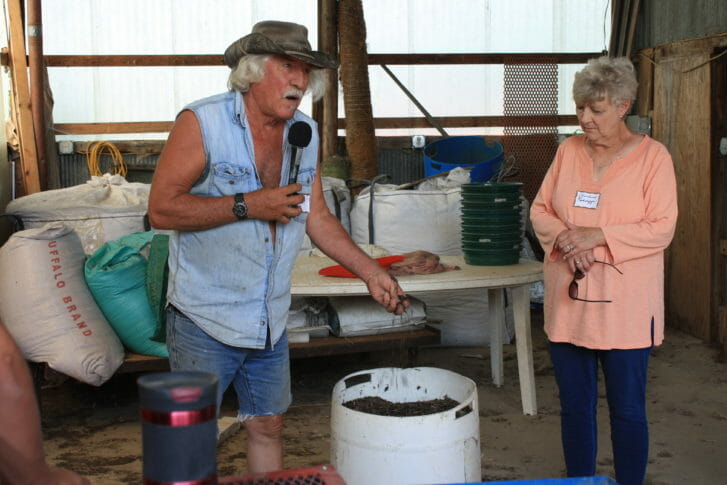 Dwight also sells live plants. He has a fenced-in area set up with sectioned areas of different prairie species planted in pea rock. When harvesting the plants, he easily digs through the rock, down as deep as the bulk of the roots. 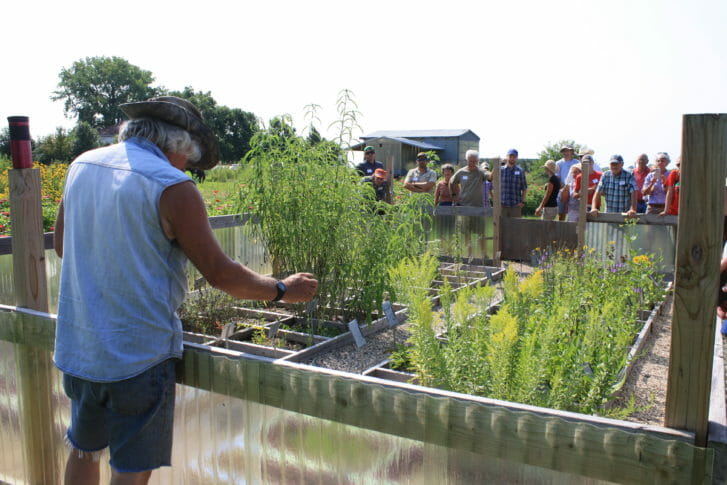 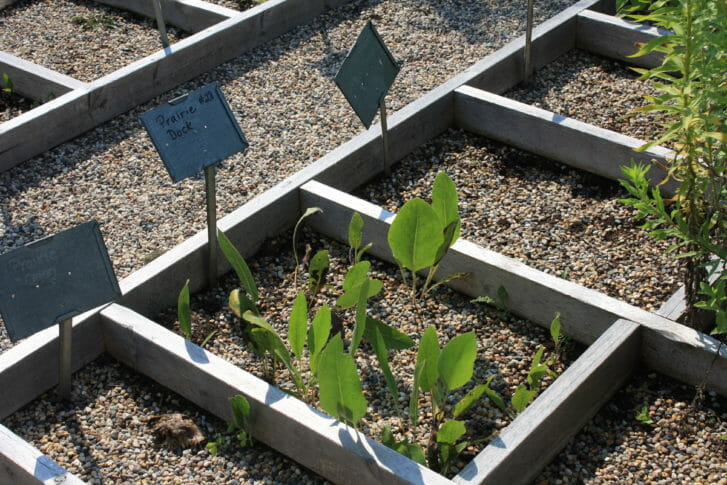 Throughout the tour, Dwight openly talked about how much time and work it takes to establish a prairie. It can take years for some plants to flower. Dwight said, “Compass plants have to be four, five years old before they flower. If you’re going to put in a prairie, you have to invest the time.”

At the end of the field day attendees enjoyed a taco spread complete with dessert trays made by Bev. Thank you to our field day sponsor, the Iowa Natural Heritage Foundation. 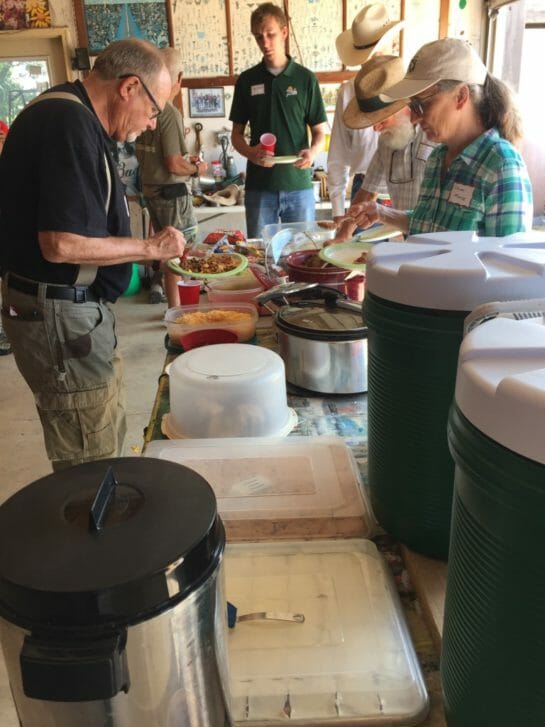