A passion for conservation and preserving natural communities inspires PFI members to take unique approaches to creating habitat on their land.

Habitat in an agricultural landscape can look and function very differently depending on the production system and the goals of the landowner or operator. We know the members of Practical Farmers are interested in on-farm habitat and ecological restoration, but the specifics of those interests are as diverse as the membership itself. This article highlights the various ways that three PFI members are working to steward habitat and wildlife on their land.

Mike DeCook raises bison and custom-grazes cattle in Monroe County with help from family and friends. He and his family also actively work to restore a network of native prairies, oak savannas, woodlands and wetlands on his family’s land, focusing on local plant genotypes wherever possible. Proper grazing and fire are the primary tools Mike uses to manage and restore native habitat.

“I’m a big believer in the intrinsic value of nature and wildlife,” Mike says. “Wild nature has value for its own sake regardless of its economic worth or benefit to people. One thing that is really important to me is the aesthetics of the land – the wildness and the natural open spaces.”

“I’m a big believer in the intrinsic value of nature and wildlife. Wild nature has value for its own sake regardless of its economic worth or benefit to people. One thing that is really important to me is the aesthetics of the land – the wildness and the natural open spaces.” – Mike DeCook 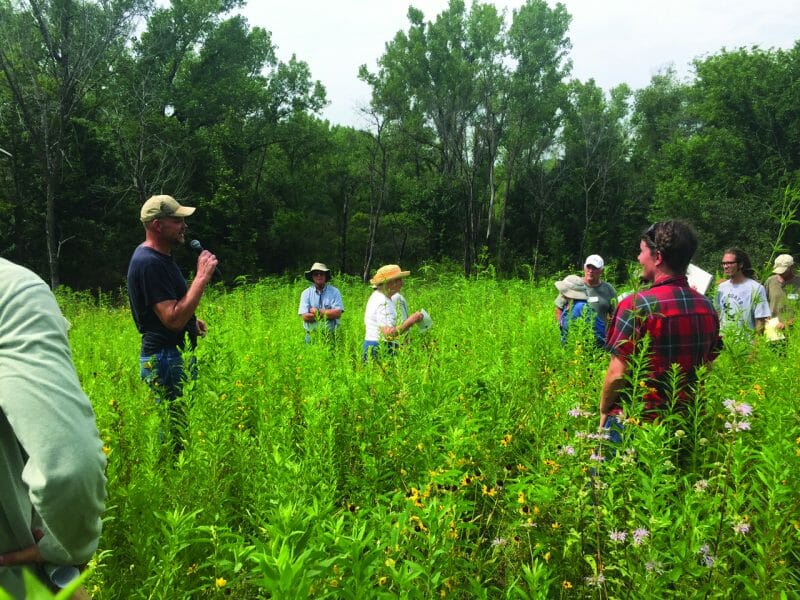 This belief in the intrinsic value of native habitat fuels Mike’s restoration efforts – but he stresses that restoring native ecosystems also benefits him economically. “Our ranch is a perennial natural system that is economically profitable without destroying or harming nature and wildness,” Mike says. “We’ve found that by protecting wildness and protecting nature, it really helps our bottom line – everything our ranch needs comes from nature for free. We can protect nature and wildness and also make a living off the land. They’re not mutually exclusive.”

Mike says that because the family farms with nature rather than against it, they need few inputs and have little need or desire for buildings and other infrastructure, which ultimately makes their operations more profitable and more resilient.

For Mike and his family, the desire to see native habitat persist on the landscape is a driving force in their decision-making. “Habitat and wildness are one of our top priorities,” Mike says. “Other than making a living, our number-one priority is to have our land protected forever with a conservation easement.” He argues that the effects of development, while not often discussed in Iowa, pose a risk to both the ecological and economic viability of the land. As more land is lost to development, he says, people lose not just the ability to see and experience wild nature, but also the ability to make a living off the land.

“I look at things more in the long-term and the forever-ness of it,” Mike says. “Fortunately, our land is protected forever from development through a conservation easement with Iowa Natural Heritage Foundation.” For him, this offers reassurance that his family’s vision for a wild landscape capable of providing for people and wildlife will continue even after he and his family are gone. 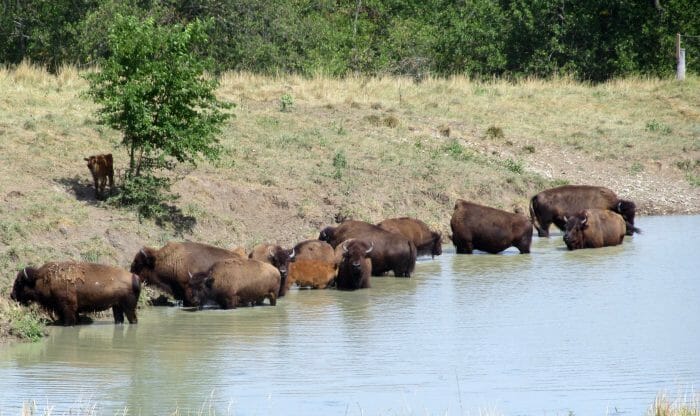 Bison cool off in a pond at the DeCook ranch. The family uses very little infrastructure to manage their bison and cattle herds.

For Beth and Rick McGeough, developing habitat on their farm has been a natural progression. The couple owns and farms about 65 acres in Warren County, where Beth also operates a U-pick berry farm called Edge of the Woods Farm. The McGeoughs have recently begun the process of restoring some native prairie on the property.

“Rick and I both have a love of wildlife, an appreciation for nature and a conviction that what we have we’re responsible for,” Beth says. “We’re always asking what’s the best next step for where we’re at, and that’s what led us to the prairie restoration.”

“Rick and I both have a love of wildlife, an appreciation for nature and a conviction that what we have we’re responsible for. We’re always asking what’s the next best step for where we’re at, and that’s what led us to the prairie restoration.” – Beth McGeough 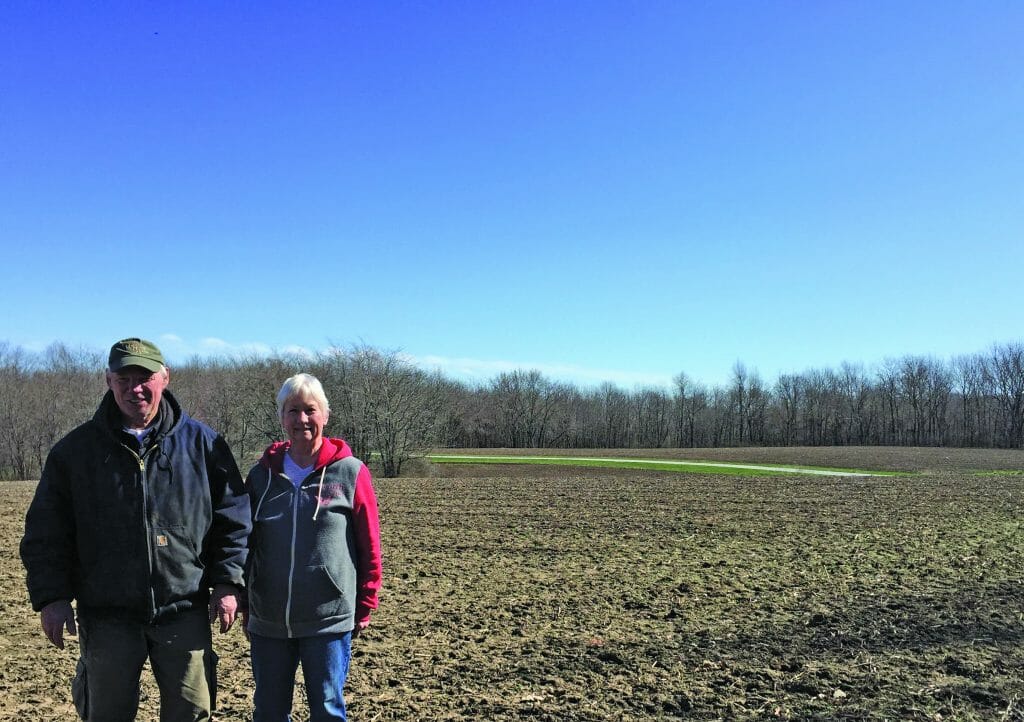 The prairie restoration is not the McGeoughs’ first foray into habitat management. They have planted a variety of trees and shrubs on their land, ranging from fruit trees to chestnuts. They also actively manage their forested lands, removing problem trees like honey locust that offer little wildlife value. Such targeted tree removal opens up the canopy for hardwoods, allowing mast-producing trees like oaks and hickories to flourish. All of these efforts are intended to benefit wildlife, Rick says, and stem from his and Beth’s mutual appreciation for nature.

“I think I was born with it,” Rick explains. “I remember having great memories of living on an acreage and falling asleep to covey calls from bobwhite quail. One day, I was fishing on a little creek for crappies and I heard this bird singing. I looked up and was just dumbfounded by the beauty of it and the brilliance of the colors. I couldn’t believe it was a native bird, but a few weeks later I was at the library leafing through Audubon prints and identified it as a rose-breasted grosbeak. I discovered then that I could see a bird and then go and identify it and learn about it. Eventually, I turned it into a career working with the DNR [Department of Natural Resources].”

For Beth, it was her experiences growing up in Colorado that instilled her passion for conservation. “One of my earliest memories is looking down from a mountainside and the only thing I could see was clouds, and I couldn’t help but think how unbelievably blessed I was to be there,” Beth says. “It’s all a learning process. Every experience prepares us for what’s coming next.”

The prairie restoration project is the next step in the McGeoughs’ habitat management efforts. Beyond the benefits to wildlife and the landscape, Rick and Beth feel that adding prairie back to their farm also benefits people – it fits with their view of their land as a place where visitors can learn about and connect with local food and nature. “One thing I love about the berry farm is that we are able to provide healthy, local food products that people love,” Beth says. “People can see where their food really comes from, and experience nature and habitat as well.”

She adds: “Of all the people we’ve talked to, no matter what stage they’re at in the process, no one says they regret starting down that [conservation] road despite the challenges. Everyone makes a few mistakes, but it just takes patience and persistence to see it through, and the benefits are definitely worth it.”

Clark Porter also believes the habitat on his land has great aesthetic value. “There is so very little natural, untouched land in Iowa,” Clark says. He views the state’s remaining habitat as “pearls on a string,” and is honored to be responsible for some of those “pearls.”

Clark manages his family farm, which comprises around 570 acres in Grundy and Tama counties. His farm is entirely no-till or minimum-till, and he’s been using cover crops since 2012. Much of Clark’s conservation focus has been on adopting in-field practices that can improve water quality and create healthy, productive soils capable of supporting a variety of organisms. But in the process, he says he somewhat forgot about the edges of his fields.

“We haven’t consciously created much habitat on our ground,” Clark explains. “We’ve had some CRP [Conservation Reserve Program] acres in the ground for over 12 years, and we just put in a filter strip that’s about 5 acres along a creek that has 8 acres of floodplain timber on the other side.” Clark recognizes that there’s probably a lot more he could be doing – and he hopes to explore those options in the future. His land presents barriers, however, that limit how much active management he can do.

“When I think of the most joyful times I’ve had out at my farm, it’s when I’ve seen some wildlife – a deer, or a fox or coyote. The habitat provides some of the most meaningful moments and helps you make the connection with your land in a way that nothing else does.” – Clark Porter 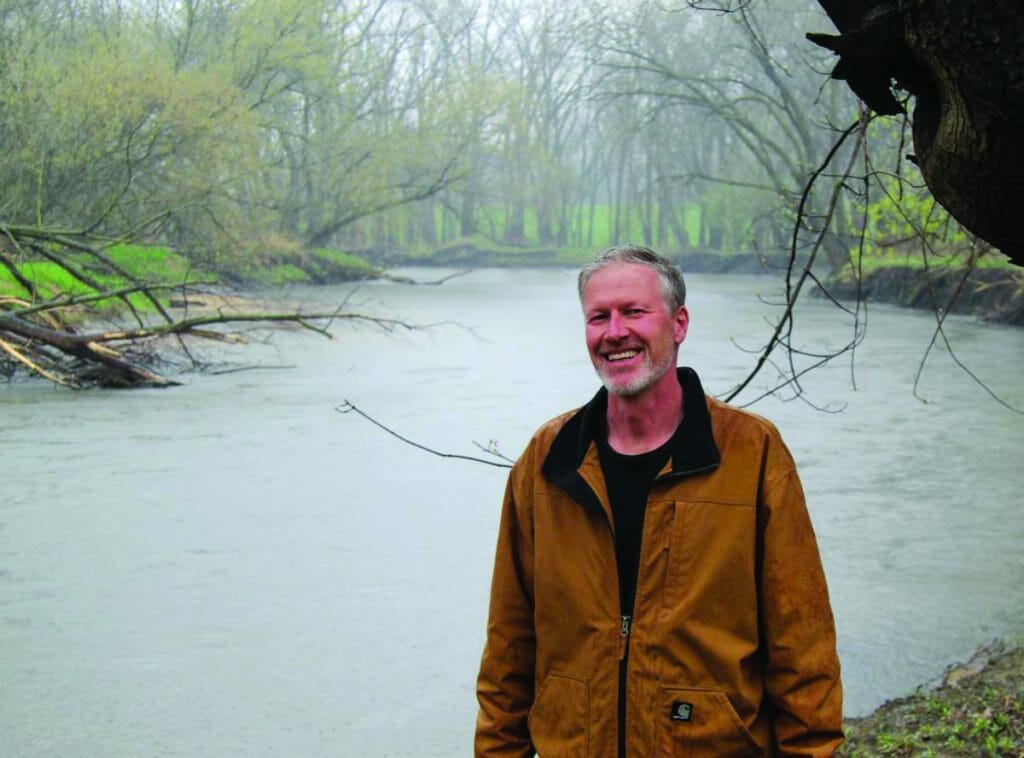 Clark Porter stands by Black Hawk Creek in Waterloo. The creek borders part of his farmland on one side, and 8 acres of floodplain woodland on the other. He uses a variety of in-field farming practices to improve the water flowing off his farmland into the creek.

For instance, Clark’s floodplain timber is difficult to access. Unless he can secure access from a neighbor, Clark says the only way to reach the property is by wading Black Hawk Creek or by snowshoeing in during the winter months. Another challenge is that the timber has been left untended for some time, largely due to how difficult it is to access. “There’s a lot of scrub timber and a lot of unmanaged property,” Clark says. “I suspect that a competent forester could give some advice about what to do to maximize the potential of that timber as habitat, but it’s really overgrown with smaller trees – buckthorn, that type of thing.”

This need for additional expertise is something Clark says he wishes he had recognized earlier. “I’ve come to realize there are people who can help you with [habitat management] for your land,” Clark says. “I wish I had taken advantage of the resources available.”

While Clark is just starting to think about ways to more actively manage his land for habitat, he still finds the existing habitat on his farm to be extremely rewarding. “When I think about the most joyful times I’ve had out at my farm, it’s when I’ve seen some wildlife – a deer, or a fox or coyote,” Clark says. “The habitat provides some of the most meaningful moments and helps you make the connection with your land in a way that nothing else does.”