The “black fly,” also known as buffalo gnats or turkey gnats, are small blood-sucking insects that are commonly found near rivers and streams. Heavy rains that continue to leave Iowa water levels high provide the optimal opportunity for black fly larvae to develop. Similar to spring 2018, the black fly population is larger and lasting longer than usual, killing off flocks of chickens. 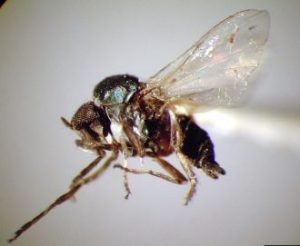 Andy and Betsy Boone of Decorah lost about 50 of their laying birds this past week to black flies. Following recommendations from USDA and ISU Extension, the Boones have moved their mobile coop into their barn. “By putting them inside we are letting the chickens regulate their exposure to the gnats,“ says Betsy, “Part of the problem rotating them in the longer pasture where grass had heavy moisture was where most of the gnat hatching was also taking place.” The Boones’ chickens rotate behind their sheep out on pasture. “The best thing for pastured chickens is keeping them on shorter and dryer grass and keeping them inside when your pasture is wet.” As the files bite and suck blood from a victim, a poison in their saliva is transferred usually causing an itch. Yet for chickens, repeated bites expose them to the chemical causing the birds to experience a fatal toxic (anaphylactic) shock.

Over the span of two days in May 2018, Garrin and Kristten Buttermore of Uncle G’s farm in Ogden lost approximately 100 broiler chickens. The USDA promptly responded to this emergency and tested for bird flu since the birds were dying quickly and in large numbers. The bird flu results came back negative. 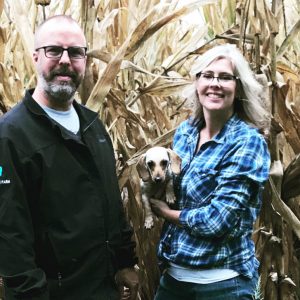 Garin and Kristten Buttermore of Uncle G’s farm in Ogden lost 100 broiler chickens in May 2018 over the span of two days.

Upon further inspection, the birds had the same gnats as the Boones’ chickens did in their throats and lungs. The broilers received numerous gnat bites that also resulted in an anaphylactic reaction. A veterinarian told Garrin the life cycle of gnats is about three weeks ending just about the time mosquitoes appear. This makes late May a critical time to watch for the gnats. In other parts of the U.S. in 2018 the gnats were killing larger livestock and deer.

Garrin shared his experience on the PFI livestock discussion list, and other members weighed in with similar stories. Terry LeDoux of Tipton experienced this years ago and says, “A strong breeze and darkness help hugely.” He recounts the birds piling on each other as they tried to get away from the gnats. In response to the issue, Terry changed his broiler start date and doesn’t order chicks until the third week of May. By the time the chicks are done brooding, the Buffalo gnats are near the end of their cycle. “This has been a life saver for me,” said Terry.

Jim Jansen of Elkader says he has gnats every year because he’s close to the Turkey River. He’s learned a few lessons on how to protect his birds since he finds they aren’t good at avoiding gnats. Jim says, “The key is to provide indoor shelter. The smaller the opening into shelter the better. They are the worst when it is hot and humid – no wind. So will be forced to put a fan in shelter. You can also keep a fan on them where they feed and water.”

Brian Nowak-Thomson of Mount Vernon has found that using vanillin helps. Vanillin is extracted from vanilla beans or can be made synthetically. He boils about two tablespoons of vanillin crystals in water to dissolve it (noting it isn’t very soluble). He then dilutes the solution in a gallon of water and fills a small pump sprayer. About every two days, Brian sprays the chickens while they roost, and he also sprays the vents on his chicken wagon. Tom McDermott of Clinton gives his chickens access to tubs of diatomaceous earth and says the dust baths seem to help.