The edges and corners and nooks and crannies of a farm—the places where habitat is most likely to be found—may not be ideal for growing row crops, but can still be ecologically and even economically productive. If a landowner or farmer gets creative, she or he might find that on-farm habitat offers lucrative opportunities for alternative enterprises, like guiding or outfitting hunts, that can coexist with and even complement more traditional agricultural production. 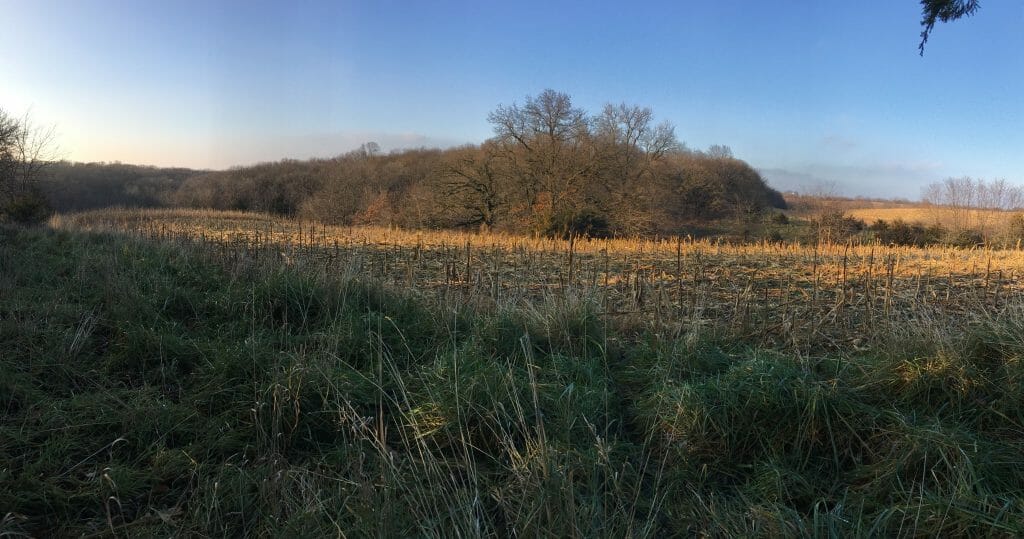 Edge-of-field habitat on one of Jim Freeland’s farms in Taylor County.

One landowner putting this idea into practice is Jim Freeland. With his wife Deborah, Jim owns farmland in southwest Iowa, northern Missouri and North Dakota, living half the year on a farm west of Corning, IA. They cash-rent their tillable ground and handle hay on shares, all fairly straightforward and traditional for an Iowa landowner. However, Jim also has 14 Conservation Reserve Program (CRP) contracts on his farms, including buffer strips, wetlands and tree projects. These contracts and their associated rental payments start to generate some cash from habitat on the farms, but Jim has taken it a step further. Jim runs a deer and turkey hunting business offering experiences unique to rural Iowa. He has hosted 35 to 40 out-of-state hunters each year for the last 20 years. 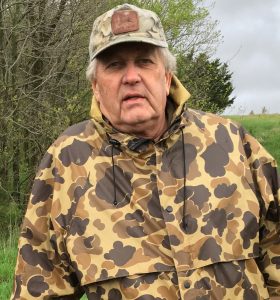 Jim Freeland has been operating a hunting business on his farms for twenty years.

For landowners, most ways to make money from offering land to hunters fall into one of two categories: leasing or outfitting. Jim’s approach is sort of a hybrid. He does not offer traditional annual hunting leases, instead he books small groups of hunters for specific periods of time, usually for a single hunting season or 1-2 weeks. However, neither does he offer traditional outfitting services: no bedmaking, no meals, no guiding. Jim simply provides his customers with a place to hunt on private land and a place to stay. This approach means that he can charge significantly less than a normal outfitter-type experience, and as a result his services are more attainable for individuals who cannot afford the outfitter experience or an annual hunting lease.

The lodging that Jim provides to his hunters varies depending on which farm they are hunting on. For example, Jim purchased an old house and turned it into a lodge on one of his farms that his hunters use. On another farm he arranges housing with locals who have apartments or houses to rent. In general, he says, hunters don’t like to stay in motels. That suits Jim just fine—one of his main goals for his business is to connect his out of state hunters to the local communities. 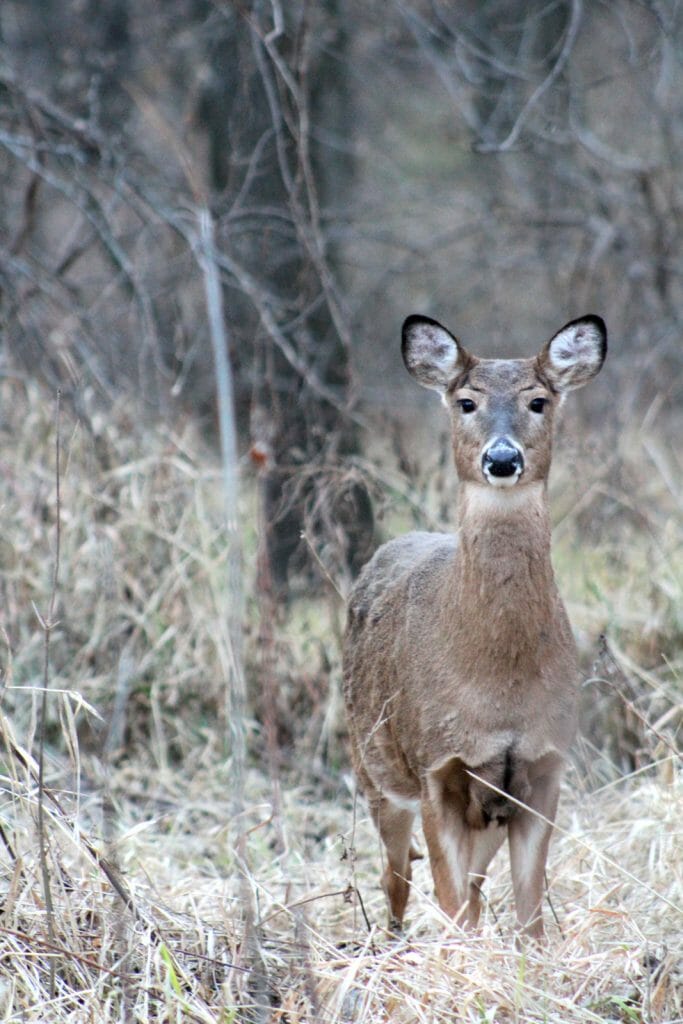 Jim gets his hunters involved with the local communities in a variety of ways. When asked about where to get deer processed, he might point his hunters in the direction of a local locker. He also might introduce his hunters to a local with an ATV or UTV—often his hunters will make an arrangement with that individual to help recover or transport deer. Jim might recommend restaurants, golf courses and bars—all local. And whenever he’s with visiting hunters, he makes a point to introduce them to the locals whenever possible.

“I strongly believe that the hunters should get to know the locals,” Jim says. “They [the hunters] really like that strongly rural experience in Iowa, and so it’s good for the hunters and good for the communities.” Jim says that many of his hunters just like small towns and really enjoy visiting rural Iowa, and he’s a firm believer that there are great opportunities for rural Iowa and for businesses like his.

“If every farm built a little guest house, I believe you could fill it with hunters and agritrourists half the year,” Jim says. “I believe that the average landowner could pay his or her property taxes with a hunting lease or something similar.”

Nonresident hunters often get a bad rap in Iowa, and many are surprised that Jim’s business only caters to hunters from outside the state of Iowa. There are a couple reasons for this. First, most resident hunters want annual leases, which Jim finds less lucrative than his current model. And second, despite the negative stereotypes associated with out-of-state hunters, Jim says that he’s had really good luck with his clients.

“Most nonresident hunters are great sportsmen,” he says. He doesn’t get very many true trophy hunters like other outfitters might; most of his hunters enjoy the chase and spending time with each other experiencing rural Iowa. Generally, his hunters have lower expectations for the types of deer they’re going to have a chance to take, which is not to say that that they don’t get opportunities at trophy-class deer. But Jim generally doesn’t worry about things like antler restrictions, culling and age requirements, all of which are tactics to select for trophy-class bucks within a deer herd. Rather, he lets the hunters choose which deer to take and relies on his habitat and Iowa genetics to produce satisfying hunts. 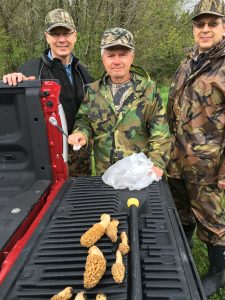 Hunters pose with mushrooms; a few of the Jim’s customers also come in the spring to scout or turkey hunt, and mushroom hunting is a favored pastime.

Like all businesses, Jim has challenges. “Deer hunting in Iowa could be a big industry,” he says, “but there are real limitations for out-of-state hunting licenses.”

The most obvious of these limitations is the cost of an out-of-state or nonresident deer license (almost $650, according to the DNR); this alone is prohibitive for many prospective customers. And in addition to the cost, deer hunting licenses and tags are difficult for nonresidents to obtain. The licenses are sold on a lottery system, and the odds of being selected for a nonresident license varies depending on the geographic zone you’re planning on hunting in. However, Jim says that despite the complexity, it is possible to work the system. His hunters now come every other year—from a total pool of 70 customers, 30-35 may come in any given year. In their off-years, his customers purchase a preference point, which increases their chances significantly of being selected for a license the following year. This system has worked well in Jim’s area, but other parts of Iowa may be different depending on the demand (or lack thereof) for nonresident hunting licenses.

Other challenges include weather and disease. Hunting, like farming, is dependent on the cooperation of the weather for success; few people want to hunt during a severe cold snap or a blizzard. Weather can also exacerbate issues like disease. In 2012, in correlation with a significant drought period, Iowa suffered its worst outbreak of epizootic hemorrhagic disease (EHD), killing thousands of deer across southern Iowa. Although Jim says the outbreak of EHD didn’t deter his hunters from coming to Iowa, it did impact their success rate and it depressed the numbers of deer his customers were seeing during their hunts. The outbreak of other diseases, like chronic wasting disease (CWD), may pose similar challenges for Jim’s business.

Jim says that his hunting business forces him to care deeply about the habitat on his farms—rather than just nonproductive blank spaces, the habitat becomes necessary for and essential to the economics of the farm. That has some advantages—where real estate agents and sellers might see “waste” areas (and price them as such), Jim sees economic opportunities. 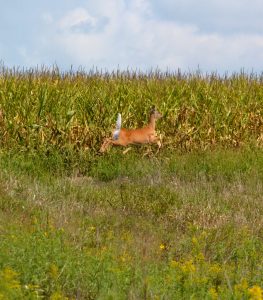 A white-tailed deer runs along prairie strip; integrating strips and corridors of habitat into the agriculture landscape is a crucial strategy for wildlife success.

He also doesn’t do much active management with things like food plots, instead relying on the natural habitat and the surrounding landscape to provide what the deer need. “I don’t really see a need for plots in Iowa,” Jim says. “Sometimes my hunters will pay their farmers or my tenants to leave crops in the field, which can serve a similar purpose, but generally food plots are only necessary if you’re trying to concentrate deer in front of a camera.” That being said, Jim doesn’t shy away from potential multiple benefits.

“This year we’re going to do cover crops on two farms,” he says. “We’re going to plant a mix of cereal rye, turnips, and radishes.” Jim says the cover crops are going to cost a little, even with some cost share, but for him it’s worth it: the cover crops will help protect the soil from erosion, build soil health and will also serve as a de facto food plot. And that’s a win-win for everyone.