Many non-farmers are surprised to learn that the vast majority of “conventional” (that is, non-organic) corn and soybean seed sold to farmers comes pre-coated with a range of seed treatments. One of the most common of those are neonicotinoid (neonic) coatings designed, manufacturers say, to protect plants at their most vulnerable growth stages, as well as later on throughout their lifecycle.

But as more research into the efficacy and impacts of these seed coatings becomes available, farmers across the Midwest are starting to question whether these expensive seed treatments are achieving the intended goals.

A PFI lifetime member from Rowley, Dick Sloan is one farmer who has questions about neonics. In true PFI fashion, several years ago Dick decided to test the efficacy of neonic seed treatments in his soybeans. He wanted to see if he actually realized higher yields from the neonic-treated seed compared to non-treated seed. His motivation was two-fold. The first was economic: he wanted to make sure he wasn’t paying for an add-on treatment that didn’t result in higher soybean yields. But he also had growing concerns over the environmental impacts of neonics, especially when the pesticides were used as seed treatments.

“I first saw some stuff in the farm literature about potential neonic impacts on insects,” Dick says. “That got my attention. I’ve spent a lot of time fostering soil life and diversity, and I was worried I was shooting myself in the foot using neonics.”

Dick also took issue with the way the neonic coatings were being sold to him. “I’m kind of anti-fear,” he explains. “I was tired of the fear-mongering, tired of these things being sold on the principle of fear and protecting you from bogeymen. I wanted to test whether I was addressing a real risk – was the seed treatment necessary to see higher yields?” 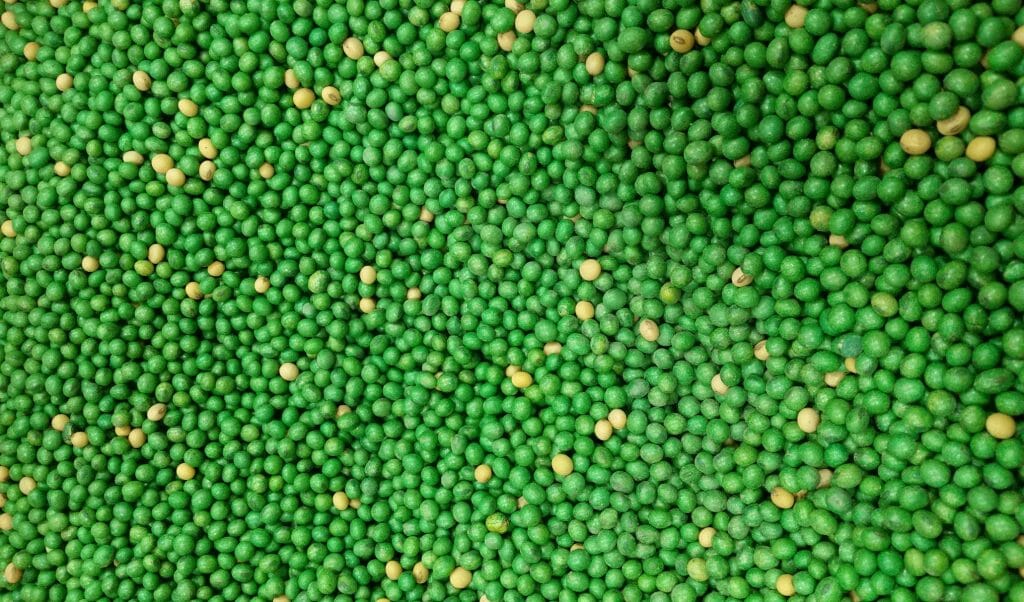 Soybean seeds coated with a seed treatment, photographed by Dick.

Neonicotinoids are a class of insecticides that are widely used across the globe. Many individual chemicals belong to the neonic group – imidacloprid, clothianidin, thiacloprid, thiamethoxam – and even more trade names (Poncho, Gaucho, Admire and Cruiser are a few). When these chemicals were developed in the early 2000s, the intent was to create a less harmful alternative to existing pesticides. And in fact, neonics are far less immediately toxic to vertebrates, including birds and mammals, than older classes of insecticides, like organochlorines (DDT) and organophosphates (malathion, chlorpyrifos). But for invertebrates, like bees and other insects, the effects of neonics are especially lethal. As the name suggests, neonicotinoids are related to nicotine, and they work in a similar way by affecting the central nervous system. Birds and mammals are less sensitive to this mode of action. But for insects, the effects prove lethal even at low doses.

As with other pesticide seed coatings, neonics are designed to be water soluble. The chemicals dissolve in the soil and are absorbed by and distributed throughout all the tissues of the plant, becoming systemic – a quality that theoretically confers protection against pests. But according to the Xerces Society for Invertebrate Conservation, neonics are many times more soluble in water than previous classes of chemicals.

They are also persistent, maintaining their integrity in plants, soils and water well beyond the annual agricultural cycle.

Those who sell neonic seed coatings claim the chemicals protect yield by providing the plant lasting protection against pests. But whether neonic seed coatings actually protect yield is still up for debate among researchers and farmers alike. While neonics are incredibly effective pesticides, John says farmers will only see yield benefits if the pests are actually present in the fields.

“They can certainly protect yield,” he says, “but the pests that are being targeted aren’t very common.”

Beyond the uncertainty over whether seed treatments result in better yields, Dick also has questions and concerns about the environmental impacts of neonics. He’s not alone. More research, including a peer-reviewed study by Spyridon Mourtzinis et al., published in the journal “Nature” in 2019, is revealing that neonics are linked to a host of unintended environmental harms. Like most chemicals, neonics are not selective. When they find their way into plants, soils and water, they don’t differentiate between beneficial and harmful insects. For Dick, this is a major concern. A firm believer in integrated pest management, he has spent many years working to expand the biological and ecological integrity and health of his soils. He was concerned that, by using neonic seed treatments, he was countering those efforts by killing the beneficial insects he has worked to foster in his fields and soils.

“I have to be able to identify when there’s a problem and treat that problem specifically. I can’t just go out and decide I have to protect myself against this bug that might be there. A lot of times, those prophylactic treatments aren’t very effective.” – Dick Sloan

Neonics also do not stay in one place. Because they are water soluble, neonics tend to accumulate in water bodies and aquatic systems, and potentially even in groundwater. Wetlands and other aquatic ecosystems host tiny invertebrates that form the bases of many food webs. According to the Xerces Society, even small concentrations of neonics in waterbodies can decimate these invertebrates, destroying ecosystems and sending ripple effects up the food chain.

Another problem with neonics is their potential to become systemic in any plant, not just crops. Conservation-minded farmers often have perennial plant communities like riparian buffers, prairie strips or filter strips at the edges of their fields, designed in part to slow down water and cause it to infiltrate before it leaves the farm. When neonics are transported through these buffers, the insecticides are absorbed by the plants growing there – which are often native grasses and wildflowers planted specifically as habitat for beneficial insects. When the insects feed in these areas, they receive often lethal doses of pesticide from plants that were intended to nurture these species. 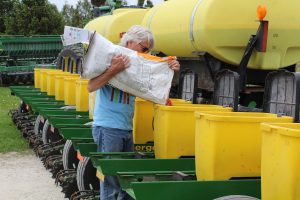 In 2014 and 2015, after his concerns around neonics kept growing, Dick decided to test whether he actually saw higher yields from neonic-treated soybeans. He did so by comparing the yields of untreated and treated seeds of the same variety through a series of replicated strip trials.

“At the time of my original trial, I had been involved with PFI and the cooperators program for a few years,” Dick says. “I was learning how to do research on my farm that would help me make decisions on my farm, so it made sense to test the seed treatments myself.”

In his original trials in 2014 and 2015, Dick saw no differences in yield between treated and untreated seed. In other words, the soybean treatment he had paid extra for at the dealer did not result in any increased income. The results prompted Dick to seriously consider whether he should be using soybean seed treatments at all. “I understand the concept of risk insurance,” Dick says, “but this doesn’t seem like a good way to go about it, especially since we don’t know all the impacts.”

Dick still plants neonic-treated corn seed, primarily because he says it’s really difficult to buy untreated corn seed. But for other farmers concerned about either the environmental impacts or the agronomic value of soybean seed treatments, Dick encourages them to set up trials on their own farms.

In the meantime, Dick will use other methods besides neonic seed treatments to manage pests in his soybeans, namely the principles of integrated pest management. “I have to be able to identify when there’s a problem and treat that problem specifically,” Dick says. “I can’t just go out and decide I have to protect myself against this bug that might be there. A lot of times, those prophylactic treatments aren’t very effective.”

The bottom line, Dick says, is that “neonic soybean treatments just don’t work for me.” Still, to make sure he didn’t miss anything the first time, Dick is running new trials this year on soybean seed treatments. And while he doesn’t expect any new results, he acknowledges that other farmers might have different experiences. “Everything is different farm to farm,” Dick says. “The biology may be different, the timing, weather, whether you use cover crops or not – someone else might see benefits, but I haven’t.”