In the Little Sioux watershed in northwest Iowa, there’s still a lot of wild land, according to Amy Crouch of The Nature Conservancy. “We’re kind of one of Iowa’s best kept secrets when it comes to really cool wild places.”

Amy works with landowners and conservation groups to improve land management and conservation of native plant and animal communities, a major goal for the conservancy’s land preserves. Creating conservation grazing partnerships with cattle producers is a win-win situation for both groups. Landowners get more grazing land while The Nature Conservancy gains a valuable tool for managing wildlife habitat and soil health.

Restoring Prairie: From Fire to Grazing

To understand the mutual value of these partnerships, it is important to understand prairies. Amy describes the prairies owned by TNC as “preserves,” while cattle producers may simply use the term “pasture.” Ecologically, these prairies were formed by a combination of climate, fire and grazing.

Early prairie conservation efforts, Amy says, first focused on purchasing land and allowing it to return to a more natural state without human intervention. “For quite a while, the conservation community thought that you just buy some place, leave it alone and let nature take its course,” Amy says. “Well, if you let nature take its course, it’s going to turn into trees or weeds, or it’s not going to be what you’re looking for.”

“Grazers in prairie grasses… help to reduce competition with non-native species and encourage a wider diversity of plants on the landscape.” – Amy Crouch

Over time, conservation professionals realized that some plants depend on fire to thrive, and that fire is integral to prairie ecosystems. A controlled burn every few years allows these plants to germinate and bloom. Pollination also occurs more widely, flower diversity increases and species’ gene pools expand. Conservationists also realized that restoration required one more missing piece: grazing.

Historically, the tallgrass prairies were grazed primarily by vast herds of bison and elk. More recently, grazing niches have been filled by cattle, and to a lesser extent sheep – which graze differently than bison and elk, but can still play an important role. Insects are also important grazers of native prairies, Amy says. As insect density has decreased – and with it, the amount of grass they consume – non-native plant species have been able to establish. “Grazers in prairie grasses let other native annuals get sunlight and grow,” Amy says. “They help to reduce competition with non-native species and encourage a wider diversity of plants on the landscape.”

Spring prairies are full of green grasses, most of which are not native to Iowa prairies. Smooth brome, for example, is a non-native cool-season grass. It is also a sod-forming grass, which Amy says makes it more difficult for native plants to push up through the ground later in the season. Warm-season grasses, as their name suggests, appear when the weather heats up in the summer, and many are native to the Iowa prairie.

Using grazing and other management tools, The Nature Conservancy hopes to suppress the amount of smooth brome and other non-native cool-season grasses in its preserves. By doing this, they are helping to reduce competition with native species, increase diversity and restore stability to the prairie ecosystem. But to re-introduce grazing, they needed cattle. This prompted The Nature Conservancy to seek local farmers to partner with. 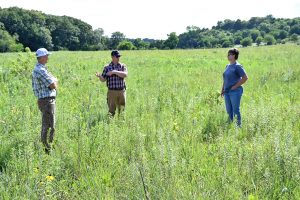 John Rock (left), Aaron Nelson (center) and Amy Crouch of The Nature Conservancy (right) gather on TNC-owned praire in August 2020. The trio are working together to graze cattle on the TNC land as part of prairie restoration efforts.

John Rock and Aaron Nelson, two cattle producers in the Little Sioux watershed, saw an opportunity to benefit their cattle and the environment. For many livestock producers, finding enough land to graze can be a challenge. Over the last 15 to 20 years, more land has gone into row crop production, decreasing the land available for cattle grazing. John and Aaron each have leases with The Nature Conservancy. Each year from May 15 to June 30, they bring their cattle onto several TNC preserves, hoping their hungry cattle will target those non-native cool-season grasses.

“I think that too often, the media or popular opinion wants to pit farmers as being opposed to conservation or environmental efforts, and conservation groups as opposed to production agriculture,” John says. “I think that is unfair and an oversimplification, because there can be a lot of mutual benefits and common goals.”

“That timeframe between May 15 and June 30 is ideal because the cool-season grasses have really taken off in those pastures and there’s ample feed per acre.” – John Rock

When John Rock’s family neighbor decided to get out of the cattle business in 2010, he and his dad, Jim, got the opportunity to expand their cattle herd and lease two nearby TNC preserves. At the time, John and his family were living in the Twin Cities where John had gone to law school and started his own law firm. In 2017, John decided it was the right time to move back to the family farm near Peterson, Iowa, and fully take over the operation from his dad. Today, he manages the farm while practicing law remotely.

John started his partnership with The Nature Conservancy for several reasons. The two TNC pastures he grazes were near his home, making it easier to get the cattle on and off the land. He also gained more grazable acres to help maintain or expand his cattle herd. “That timeframe between May 15 and June 30 is ideal because the cool-season grasses have really taken off in those pastures and there’s ample feed per acre during that time,” John says. “It allows us to do our calving closer to home, and to give our pastures that are closer to home a rest over that 45-day period.”

About 5 miles down the road, Aaron Nelson, John’s cousin, has been farming for a little over 12 years. In addition to his cattle operation, he manages over 700 acres of row crops and a small feedlot. His grandfather previously owned the land he leases from The Nature Conservancy. After his grandfather’s death, the seven siblings sold some land to TNC, with the understanding that the Nelson family might be able to rent the land for grazing.

Being able to graze that land is advantageous, Aaron says. The increased acreage lets him run a larger cow herd. He also doesn’t have to worry about raising more hay, which saves money. His cows like grazing the preserve so much, he says it can be a challenge when it’s time to move them.

“We’re trying to round up cows to leave before the end of the lease, and they don’t really have much incentive to leave because there’s still plenty of grass to be grazed,” he says. The location of these pastures also poses some logistical challenges for Aaron, since the cows need to be transported on and off the land.

But Aaron says the hurdles are marginal compared to the benefits. Beyond accessing more grazing ground, the TNC partnership has opened his eyes to the link between grazing and ecosystems. “There’s a lot more going on in that whole ecosystem than I’d have previously thought about,” Aaron says. “Grass isn’t just grass out there. I had never given much thought to how purposeful grazing can be used as a tool to kind of steer an ecosystem in the direction you want it to go.” 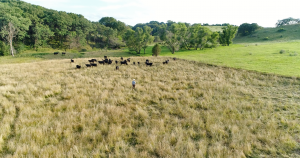 John Rock walks out to check cattle on some of his pastures.

For these two cattle producers, the advantages of having more pasture outweigh the logistical challenges of grazing prairie each spring. Both say working with The Nature Conservancy has been a good experience, and they encourage other farmers to look for similar opportunities in their areas.

“There’s a lot more going on in that whole ecosystem than I’d have previously thought about. Grass isn’t just grass out there. I had never given much thought to how purposeful grazing can be used as a tool to kind of steer an ecosystem in the direction you want it to go.” – Aaron Nelson

“I think this kind of partnership potentially has a broader appeal,” John says. “There are plenty of other public lands or conservation-focused grasslands that aren’t being grazed, or their stakeholders haven’t considered using grazing to their own benefits.” He recommends that farmers seek out local conservation groups, public lands or other kinds of non-profits to find out if there are similar programs, or an opportunity to start a conversation.

John and Aaron also note that their TNC leases might look a bit different from a lease with a neighbor. For instance, TNC’s leases include additional conservation-focused provisions, such as restricting overgrazing in the event of drought. To ensure a grazing partnership is mutually beneficial, they encourage farmers to start a conversation with their landlord, look closely at the terms of the lease and make sure it allows for a large enough herd so unnecessary costs can be avoided.

Whether you call it a preserve or you call it a pasture, the end result is the same: improved native ecosystems that benefit nature and cattle producers. “One big takeaway for me,” Aaron says, “is that I’ve learned there are situations where producers and conservation organizations can have a symbiotic relationship – our goals may not be identical, but the means can intertwine and benefit both sides.” 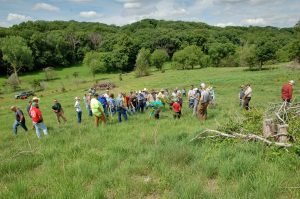 Field day attendees learn how cattle producers John Rock and Aaron Nelson graze prairie through leases with The Nature Conservancy during a PFI field day in June 2019. The partnerships bring big grazers back to the landscape, helping with ecosystem restoration while expanding grazing acres for John and Aaron.