Review of “The Road I Grew Up On: Requiem for a Vanishing Era”

When Helen DeElda Gunderson was young, 11 families lived on farms along the road where she grew up. Today, only three of those farms are inhabited, and only one is home to children.

The cattle, pigs, and chickens are gone as are the windbreaks, barns and so much more that were typical of rural Iowa for much of the 20th century. Helen’s book “The Road I Grew Up On” explores, through prose and photographs, that vanishing era. My grandparents, Vera and Bill Fisher, farmed just miles from Helen’s road, and I grew up hearing about the various Ives, Gunderson and Brinkman family members who are featured in this book. I remember Helen’s mother as the friendly librarian at the Rolfe Public Library, where my grandmother would take me when I visited their farm. I didn’t meet Helen, however, until 2006, when I joined Practical Farmers of Iowa as its executive director. We became friends, and I was delighted when our board of directors chose her for our first Farmland Owner Legacy Award in 2013.

More than half of Iowa’s farmland is owned by those who do not live and labor on their land. Helen is a leader among those owners. She has worked hard to provide land access for the next generation of farmers. She has begun moving her land toward organic production and has established desperately needed pollinator habitat. Her plans include continuing her legacy beyond her death through her bequests to a few select Iowa nonprofit organizations.

Helen’s leadership is in word as well as deed. She writes thoughtfully about the need for those who own land to be connected with it, “like knowing about the soils, the people who farm it and the ethics involved in managing it.” She writes about the negative effect of programs like the Farm Bureau’s Century Farms Program, which celebrates holding on to land ownership long after a family is gone from it. Why not a program, Helen writes, that “would honor landowners who transfer their property to young farmers, sustainable farmers or other people who would manage the land in ways healthy for the environment, economy and community.” 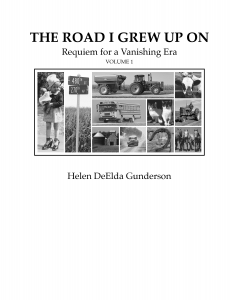 I love reading books about rural life, such as Mildred Armstrong Kalish’s “Little Heathens” and Ronald Jager’s “Eighty Acres.” But most of those accounts are not honest about the disadvantages of rural life. Helen’s willingness to admit the “nostalgic and disenchantment, the love and disdain” is the reason “The Road I Grew Up On” is so fascinating. She doesn’t shy away from the fact that we stole this land from Native Americans, or that those of us who chose urban life are part of the fabric of “the unsettling and destruction” of the Midwest farm culture. She explores family dynamics, rigidity about what kinds of relationships are acceptable, denial of feelings and the repression of imagination, all of which she experienced growing up in rural Iowa.

Helen’s examination of the limited agricultural opportunities for women farmers is especially fascinating. As she now manages her Pocahontas County farmland and has transformed her Ames properties into a delightfully diverse urban farm, she is a triumphant example of what women can accomplish. As I head toward my 60s, I remain shocked at how quickly any trace of my grandparents’ farmstead and legacy disappeared. Some of that land is still in the family, but what was nurtured by my grandparents is gone. Today, I even need help locating the spot of the former homestead not too far from a parcel of Helen’s land that she calls DeElda Farm – none of the trees or homesteads I previously used as landmarks remain.

Helen’s attention to detail is such a gift for those of us who have experienced that loss. She documents road conditions and maintenance; moving day, when farm families moved to different farmsteads; riding the school bus; farm activism; the coming of electricity; changes in farm equipment; and a whole lot more.

When I worked at PFI, I was continually amazed at the civility and affection people of widely different religious and political perspectives showed each other. Helen is a perfect example, and that tolerance – which is becoming rare – is woven throughout her book. She deeply respects the people she interviewed. She names them all – the landowners, the tenants, the excavator who demolished her parents’ and grandparents’ homes and the cremation worker at the facility who worked with her mother’s remains. As she says about her stoic ancestors, these rural Iowa folks were “born into this world, were once children, were loved and in turn loved others, experienced joy, had their foibles, faced challenges, feared what the future would bring, and yet continued on their journeys.”

Helen’s book is not only a gift for today but for future generations. Helen writes that storytellers are people who “look at the ordinary under their noses and shape it in a way that, if held before us, helps us look at our lives, seeing them in ways that we have not seen before, and giving us new meaning and vision.”

Helen, my friend, you are a true storyteller.

Teresa Opheim is a lifetime member of PFI who served as Practical Farmers’ executive director from 2006-2016. She now lives in Minneapolis, where she directs the Climate Land Leaders initiatve of the Minnesota-based Main Street Project.