Sharing Soil to Heal the Land

Bart VerEllen and Shirley Waite are working together to restore her family farm.

Shirley Waite reflects on her youth fondly. “In the winter, I helped toss bale flakes out for the livestock,” she says. And once she was older and stronger, she recalls how she “threw a lot of bales during hay season.” Talking to her, you sense the enduring connection to her farming life and roots.

The Reinhard side of Shirley’s family has farmed around the Blakesburg area in southwest Iowa since the 1850s. When she and her first husband, Duane Howk, purchased 10 acres from Duane’s parents in 1977, they combined their family farming legacies to build their own farming future together. Over the years, they contract-farmed the Howk family land and bought it as they were able. They raised cattle and had 40 acres in row crops. The farm’s history was also peppered with pigs, sheep and chickens.

When Duane died unexpectedly in his 40s, Shirley encountered pressure to step away from farming to focus on their three children. She wasn’t going anywhere. “I had just as much invested in the farm,” Shirley says. She continued to farm the Howk farm and in 2009, married her current husband, John Waite. Shirley and John were eventually able to purchase the remaining 35 acres of the original farmstead. Today, the farm is a total of 188 acres.

Bart VerEllen has similar memories working on a dairy farm near Port Hope, Michigan, saying he had “an early inclination” that farming suited him well. For Bart, however, the path meandered far from home – and for a time, far from farming. As Bart was graduating high school in the 1980s, the farm crisis was in full swing. Feeling that his farming dreams were squashed, he enlisted in the military and eventually went on to own a welding business. Bart grew his welding business in Florida and eventually maintained a small herd of cattle for stress relief on rented ground. Then in the late 2000s, he decided it was time to close shop and move to Colorado to pursue ranching. But managing someone else’s cattle on someone else’s land didn’t cut it for him.

When he seriously started “putting the pencil to his dreams,” southern Iowa and sheep appeared on his radar.

In 2013, Bart and his wife Trish moved the family to Centerville, Iowa. Bart secured a lease and started a familiar operation of calving and selling pairs. All the while, he was sitting on the fence about switching to sheep. That’s when Shirley chanced to call him about the possibility of farming her land. For Bart, the timing felt like divine intervention. 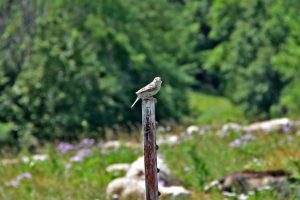 A dickcissel perches on a fence post at the Waite farm. These once-ubiquitous grassland birds have returned to the Waite farm since the land was converted to a pasture-based livestock operation.

“There used to be rivers of soil flowing off the land during storms, and the ponds were all muddy. They were losing water, but now they’re holding it and the ponds are full and clear.” – Bart VerEllen

Finding a Land Match Through PFI

Before this felicitous encounter, just as Bart and his family were adjusting to farming in Iowa, Shirley and her husband John had been in the midst of their own big decisions. By this time, Shirley had become a member of PFI and her perspectives on farming and farm transitions were changing. “After some reflection, we decided the land needed some rest,” Shirley says. “It was a hassle to farm 40 acres and we thought it might be better to seed it down and get some sheep or goats.”

Shirley and John had felt increasingly limited in their ability to keep up with the farm. They started thinking long-term and determined that renting would take a substantial burden off their shoulders. In the event of their deaths, they also reasoned the farm could continue generating income while estate matters were dealt with. Shirley created a profile on PFI’s Find-A-Farmer website, which helps connect land-seekers with landowners. Within six months, she found Bart’s profile on the site and they started corresponding about a potential rental agreement.

“We met twice before I even looked at the land,” Bart says. “It was important for me to understand what their goals were.” Bart was ready to make the switch to sheep and Shirley and John were able to help him purchase a portion of his 220 ewe flock in 2015. Bart finished selling his remaining cattle and, after the first lambing, was able to repay the Waites. Every year since, the flock has increased by 100 ewes and Bart expects 600 ewes this fall.

Bart is now in his fifth year at Shirley’s. He still drives 40 minutes one-way from Centerville to tend to the flock, but their arrangement allows Bart to rotate the flock around 180 acres of the property and access the outbuildings and equipment. As part of the deal, Bart also helps with maintenance around the property.

Keeping livestock on the land is important to Shirley for soil health and biodiversity, but also for emotional reasons. In recent years, family moved back to revive the Reinhard farm homestead, and Shirley and John were able to purchase back the last 35 acres of the original Howk family farm, land that had been overgrazed. “It’s exciting to see it – the transition,” Shirley says, “and for the kids to see it too.”

Shirley and Bart both admit their journey together hasn’t been without their fair share of bumps but the arrangement has been mutually beneficial. Bart has access to land and is successfully building his flock and Shirley has found someone to steward her land while generating rental income. “Bart showed up just in time,” Shirley says. “There were sections of clay on the property that had been overworked and were nearly barren, but now they’re thriving. There are still weeds, but the sheep like them.”

“Bart showed up just in time. There were sections of clay on the property that had been overworked and were nearly barren, but now they’re thriving.” – Shirley Waite

They have both noticed a decrease in run-off on the property. “There used to be rivers of soil flowing off the land during storms and the ponds were all muddy,” Bart says. “They were losing water, but now they’re holding it and the ponds are full and clear.”

“With the increase in vegetation, the rain is soaked right up,” Shirley adds. “It’s cool to see.”

The wildlife on the property has also changed. Bart wasn’t familiar with bobolinks, a grassland bird once ubiquitous in Iowa, until he started seeing them on John and Shirley’s property. Even though it wasn’t his initial aim to increase the land’s habitat and biodiversity, Bart describes himself as a “conservationist at heart.” He says, “To start seeing that change confirms we’re doing something right.” 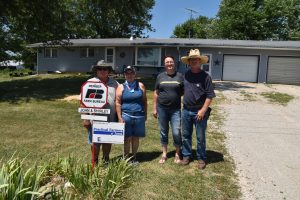 From left to right: John and Shirley Waite, and Trish and Bart VerEllen, pose together on the Waite farm.

Plans for the Future

Bart is still scaling up and hopes in another year to quit his town job to farm full-time. The expected 600 ewes this fall will surpass his projected tipping point to reach the next level in growth. Once he knows he’s making money at that stage, he’d like to get another lease  for more land and add stocker cattle to the operation. Stocker cattle have a short turn around and are typically purchased in the spring and sold in the fall after a summer eating grass. Diversification helps with parasite control and risk management. “Being easy to sell would let us use them as a drought management tool. Lots of grass- buy stockers. Short on grass- sell them and save the flock,” Bart explains.

Shirley is equally hopeful that Bart will bring back some stocker cattle and maybe even some pasture-raised chickens to follow. Moving forward, she’d like to see continued diversification on the farm.

At this point in life, Bart wants to be outside with his livestock. Not only is he hoping to have more time to be on the farm when he transitions to full-time, he wants to allocate more time to his community and church. The lease arrangement and early support from Shirley and John have allowed him to work steadily toward that goal.

For Shirley, Bart’s management of the property has given her freedom to tend to other aspects of life. For instance, she’s hopeful her grandchildren will get some livestock or small animals so she can guide them through what’s involved with animal husbandry. The arrangement has also broadened her perspective on what’s possible on the property: She and John have started a small orchard and are looking forward to the day it begins producing fruit.

Bart and Shirley both believe that properly managed livestock can heal the land. They also strongly feel that providing opportunities to new or beginning farmers benefits the community – from gaining another invested farm family; from cleaner water and healthier environment; and from the connections forged in the sharing of soil.