Coming Together to Welcome Everyone

PFI welcomes everyone. This includes people of all farming enterprises and philosophies, political affiliations, gender identities, races and ethnicities, and more. 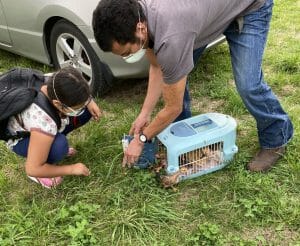 Beginning farmer Santos Lopez releases some baby chickens with his daughter. Santos has been farming Sustainable Iowa Land Trust’s Phoenix Farm in Morse, about 9 miles north of Iowa City, for the past three years raising chiles, tomatoes and other vegetables. Photo courtesy of SILT.

Over the past few years, PFI members have increasingly requested that Practical Farmers focus on racial equity and increasing inclusivity among our membership. In early 2019, the board of directors voted to use board-designated funds to embark on welcoming Latino Iowans into our membership, and we began work on a project to reach aspiring Latino farmers in Iowa. We started by reaching out to 14 Latino-led organizations that provide services to Latino communities across Iowa. Staff at these organizations told us that many Latino Iowans are unaware of the opportunities to farm beyond a farmworker or laborer position, and that they have limited knowledge about resources and programs that can help aspiring farmers.

“Working with youth and their families, Latino communities are looking for quick and stable opportunities to generate income,” said Dawn Martinez Oropeza of Al Éxito, a program that works to assist high school students pursuing a higher education. “The difficulty lies around land and home ownership. If people have difficulty purchasing homes, how will they even be able to purchase land to farm?” Lena Avila Robinson, of Latinos Unidos of Iowa, said: “It would be beneficial to have resources and educational materials agricultural organizations shared that cater to the Latino community and their needs.”

Our ability to connect with Latino farmers has been slow and limited due to difficulty identifying individuals who are farming. Thus far, we have been able to connect with six Latino farmers across Iowa. Latino farmers from neighboring states have also started participating in our work. Through our conversations with service providers at Latino-led organizations and other partners, we have met several people who are knowledgeable of Latino farmworkers, but not farmers – though some groups argue that farmworkers deserve to be referred to as farmers. Along with the few Latinos who are farming, they are not growing on a large scale. Most are producing on a small scale for their families and communities.

“One of the things I have learned throughout the years of working with Latino farmers is being consistent – actually telling people this is what I am going to do and then following up.” – Lucia Schultz

Santos Lopez, a beginning farmer in Iowa City, is just at the start of his farm journey. Santos has been farming on 2 acres of land for the past three years, raising chilies, tomatoes and other vegetables, on Sustainable Iowa Land Trust’s Phoenix Farm in Morse, about 9 miles northeast of Iowa City. A native Salvadoran, farming in rural Iowa reminds him of his homeland. “I always liked the country,” Santos says, speaking in Spanish. “When I am on the farm cultivating, during that time I am occupying my mind on the land, the plants and myself.”

Santos also maintains an off-farm job. He has been able to produce a decent yield from his crops, donating produce to people in his community or selling to other local farmers to include in their CSA shares. He would like to scale up his production in the next few seasons, but says doing so has been a challenge without a strong and consistent market stream, and with limited knowledge of how to extend his growing season into the winter.

What We Have Learned So Far

While we are just at the beginning of our efforts to connect with Latino farmers in Iowa, those we have connected with so far have helped us identify barriers and limitations where PFI can work to fill in the gaps. While all beginning and aspiring farmers face barriers to getting started, we have heard from those we’ve connected with that farmers of color experience unique barriers, including distrust resulting from discrimination, lack of accessible resources, disproportionate difficulty accessing capital and more.

Land access is often the first major barrier to starting a farm. The majority of the Latino farmers we have connected with are farming on rented ground or in their own backyards on a small scale. Those who have some access to land still experience challenges accessing the necessary farm machinery and equipment. These farmers also noted that a lack of knowledge about production practices and potential markets inhibited their success. Knowing the barriers these aspiring farmers face is an important first step in our work, but we must also create meaningful relationships. Building trust and confidence among these communities will come through continued conversation and action as we work to support these aspiring farmers.

Though the barriers are steep, the Latino communities we have connected with have a deep interest in growing food for their families and communities. Several of these farmers had some sort of background in agriculture in their countries of origin, from farmworker jobs or from gardening experience. Interest in farming is strong, but the pathways to begin are unclear. “I think the Latino community has the interest to farm, but they don’t have the time,” Santos says. “I plant my plants, I go to work and sometimes at night I go to check on my crops. I say to myself, I don’t have time, but I push myself to visit them and see what they need. Nobody has taught me how to farm like this. My family planted but only produced enough for the home, not at the level of marketing products.”

“I would love to learn more about vegetable production. I never had access to people who could educate me on farming. I know there are people or other farmers who are more educated than me when it comes to crop production. I would want to connect and learn from them.” – Santos Lopez

For the past several years, PFI has also been working with Lutheran Services in Iowa’s Global Greens program to build relationships with farmers who came to Iowa as refugees. Through ongoing efforts to strengthen those relationships, we have successfully welcomed some of these farmers into PFI as learners, teachers and peers. We plan to continue building our credibility and trust among Black, Latino, Indigenous and other people of diverse racial and ethnic backgrounds by listening to their needs, collaborating with existing service providers and developing meaningful programming that addresses the needs of these farmers.

We realize there is more to learn and new connections to be made in Iowa’s Latino and underrepresented communities. Since we started this work in 2019, we have learned that simply translating documents and inviting Latino Iowans to our network isn’t enough to successfully welcome them into PFI. Rather, we need to create ongoing relationships based on trust.

As staff for the Center of Rural Affairs, both Lucia Schulz and Eunice Ramirez spend their time reaching out to Latino farmers encouraging them to network, educate and lead. Lucia’s experience as a migrant worker has helped her connect with Latino farmers in Nebraska. “One of the things I have noticed throughout the years of working with Latino farmers is being consistent – actually telling people this is what I am going to do and then following up,” Lucia says. “Say what you mean and mean what you say. There is so much distrust in Latino communities with service providers. Even now, the farmers I met three or four years ago, I still keep in contact with them. They will contact me saying, ‘hey Lucia, I need help translating this document,’ or ‘can you help me set an appointment with an FSA [Farm Services Agency] agent because they sent me a letter.’ Consistency for me has been an essential way for breaking down the barrier to accessibility.”

“We have to prove ourselves,” Eunice adds. “We have to reach out and be consistent, as Lucia mentioned. As English speakers, we have access to resources and understand what is out there. But someone who is Latino and Spanish-speaking, their priority is not being on the computer and researching. They come home, eat dinner, pay bills and prioritize spending time with their families.”

Lucia and Eunice both make a point of emphasizing that their own success is based on the success of those they work with. “I let Latino famers know we’re still going to be here to provide additional opportunities, now and in the future,” Lucia says.

Working with SILT, along with the Center for Worker Justice of Eastern Iowa in Iowa City, Santos has been able to gain support accessing land. He has also become more aware of his need to build his skills and seek production and marketing guidance so he can expand his farm. PFI will work to connect Santos and other underrepresented farmers like him with experienced farmers in our network.

“My daughter, since she was little, had a strong passion for the rural countryside,” Santos says. “Some of this I do for her so that she has access to the land and the countryside. I would love to learn more about vegetable production. I never had access to people who could educate me on farming. I know there are people or other farmers who are more educated than me when it comes to crop production. I would want to connect and learn from them.”

Our Latino outreach work is just a start – we are eager to build relationships with beginning and aspiring farmers of diverse racial and ethnic backgrounds, and increase their involvement with PFI as learners and leaders, as we work toward a resilient Iowa.