The more we learn about soil health and using agriculture to mimic natural ecosystems, the more we realize the benefits of including livestock in cropping systems. PFI farmers are exploring various ways to integrate livestock on our landscape, and finding what does and doesn’t work for them. Their creativity is impressive – and necessary, if we are to meet the tenets of soil health.

This article explores three tiers of integration, each delivering a suite of benefits to the farms and farmers – and contributing to the revitalization of our rural communities.

Through these farmers, we’re learning that reintroducing livestock doesn’t mean forsaking the past for a wholesale embrace of the new. Instead, these farmers are showing how blending past and present agriculture practices and technology can help us find solutions, today, to integrate livestock on the land. 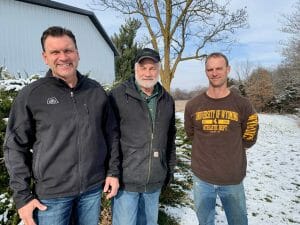 Near Udell, in south-central Iowa, John Burger and his uncle, Richard, raise row crops and have been experimenting with cover crops for five years. A few years ago, they invited their neighbor, Craig Swaby, a cattle producer who grazes pasture adjacent to the Burgers’ crop fields, to graze their cover crops.

“This is the third or fourth year Craig has grazed them,” John says. “Craig is a young farmer and my uncle, who is the landowner, was interested in trying to help him out. He needed more land and we knew there was some benefit with intensive rotational grazing. We know that, through the principle of biodiversity, more species per unit equals more productivity. Our motives were to help Craig out and enhance soil productivity.”

Craig has a 15-foot no-till drill that he uses to drill cereal rye on the Burgers’ fields at no charge. Richard pays for the rye. In 2020, Craig drilled the rye on Oct. 31, hoping to graze it twice in the spring before the Burgers planted to soybeans. He gets one grazing on years when the field is planted to corn. Craig grazes his group of about 130 yearling calves in strips throughout the 35 acres of cover crops, then opens the gate to his pasture when the cattle need to be let off the cover crops. This experiment has been successful because of how simple it is to move cows back and forth from cover crops to pasture.

“It also depends a great deal on the individual you allow on your land,” John says. “Craig is not your ordinary cattle person. He has a degree in animal science. We notice how he manages his cows and he has his herd trained to electric fence. There are others I’d be cautious about – it’s easy to let all the cows out and leave them in a field for a long time and cause compaction.”

Compaction is John’s biggest concern. When looking for someone to graze your cover crops, John recommends an interview and finding someone with a proven history of proper herd management, not someone just looking to rent ground to feed cows. “The right partner is someone who has a vested interest in a long-term relationship with their neighbors,” John says.

Craig and the Burgers don’t have a formal contract; the arrangement is based on a verbal understanding and mutual respect for one another. “If we were doing this on several thousand acres with more than one individual, there would need to be more definition,” John notes. When planting their fields, the Burgers wait to plant the 35 acres Craig grazes until last, to give Craig the longest grazing window possible. Because the parcel is relatively small, John says it’s easy to manage planting it last, which usually means it’s planted 10 days behind the other fields. That extra time, however, means significantly more grazing time for Craig.

Because the setup has been so successful so far, the Burgers like to “keep it simple,” planting a cereal rye cover crop, rather than experimenting with cover crop mixes. ‘We’re pretty happy using one cover crop because it’s really tough,” John says. “It grows fast, is relatively cheap and we can seed it late mixed with fertilizer. And it’s giving Craig feed value.” 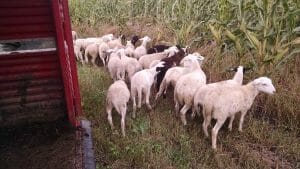 Robert Alexander raises organic row crops and livestock near Granville, in northwestern Iowa, and has been experimenting with planting corn in 60-inch row-widths and interseeding cover crops between the rows. The potential to use these cover crops as forage and add more grazing days is a primary motivator for Robert.

In 2019, he seeded buckwheat, cereal rye, collards, cowpeas, crimson clover, phacelia, rapeseed and winter peas on July 8. The cover crop cocktail was interseeded into 100-day-maturity corn planted on June 6. Robert had heard of sheep grazing in standing corn before and wanted to try it for himself. “I turned my sheep in on Sept. 10, and that was too late,” he says. “Really, that’s when I should have been pulling them out. I learned you need to have the sheep out before the ears start pulling away from the corn stalks.”

Robert grazed 55 newly weaned lambs in 20-by-550-foot strips made of two strands of polywire, moving them every 24 hours. “We moved them fast because we wanted them to eat the cover crops and not the corn,” he says. “But this meant we left a lot of the cover crop forage behind.” Before he switched to a once-daily move, the lambs stayed in their first strip for two days. “They ate a lot of the bottom corn leaves, but then we noticed there were ears knocked to the ground with kernels missing.” The paddock was set up so the lambs also had access to a grassy buffer strip and waterway. The sheep grazed the buffer strip and waterway first, then slowly worked their way into the corn rows.

This experiment informed Robert of what he’d do differently in the future. He concluded he had planted his corn too late, which set back the cover crop planting date and made weed control challenging. He also realized he should have started grazing the lambs earlier, ideally in August. Robert lambs in May and weans 90 days later. He’d need to make sure the timing would line up to graze the weaned lambs in the corn. In 2018, he turned ewes and their lambs into standing corn, and the ewes jumped on the stalks to knock them over. They ate the leaves first then started in on the grain husks, going for the ears last. Fortunately, weaned lambs aren’t big enough to knock over the stalks.

In the future, Robert wants to try a six-year diversified crop rotation with one year of corn, one year of soybeans and one year of corn, followed by three years of a pasture and hay mix. He’ll rotationally graze the pastures similar to how he grazed in 2020 – 12-hour moves across 22 acres. After six years, he intends to use his stand of pasture and hay as fertility for his corn. Integrating livestock into crop rotations can be a dynamic, ever-changing process. 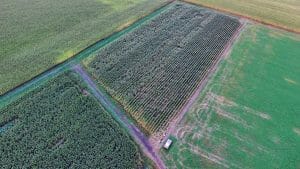 These specks of white are lambs grazing in standing corn planted in wide, 60-inch rows at Robert Alexander’s farm in northwest Iowa.

Instead of 60 inches, Zack Smith, of Buffalo Center, leaves 20-foot swaths between plots of corn and soybeans so he can integrate livestock directly into the crop operation – a system he calls “stock cropping.” Zack describes his system as “the intersection and cross-leveraging of livestock and crops together in the field happening dynamically at the same time.” Zack and his business partner, Shelden Stevermer, have been experimenting with strip intercropping since 2010. When they first started, they were trying to achieve the “solar corridor” effect by planting soybeans between corn rows in hopes of getting a production boost in the corn. But they found they were always frustrated by the poor growth of the beans.

“Instead of having a loser crop in the middle of the row, a friend suggested trying livestock instead of crops,” says Zack, who launched the stock cropper idea in June 2020. “This project is the genesis of two middle-aged, 41-year-old farmers having a midlife crisis on the direction on our farms and where we think the future is going.” The idea of stock cropping is rooted in helping small farmers find innovative ways to boost profitability by doing things differently and more efficiently.

The system works like this: In the 20-foot swaths between the crops, Zack and Shelden planted a variety of forages for sheep, goats, pigs and poultry to graze. Zack consulted with PFI member and forage agronomist Margaret Smith, at Albert Lea Seed House, on the best mix of plants. Together, they came up with a mix of annual ryegrass, Sudangrass, oats, forage rape and field peas.

“We had to find a way to confine the livestock, so we designed and manufactured a mobile barn unit called the ClusterCluck 5000,” Zack says. The barn is autonomous, and moves slowly down the swaths of forage with the help of a winch. The pen in front of the mobile barn houses the goats and sheep, who get the first pick of the forages. At the center of the barn is a shelter under a roof, which is angled to collect rainwater and used as the animal’s drinking water. The center of the unit also houses the animals’ supplemental feed. The pigs, which are kept in a pen off the back, also have access to the shelter but are kept separated from the small ruminants. A flock of broilers follows in a separate structure behind the mobile barn.

Describing the system as a “regenerative circle,” Zack says: “The thing we are really excited about is having self-sufficiency in nutrient cycling. We want to have row crops in the field grown specifically for the purpose of feeding animals the following year. On the flip side, the animals move through the strips and lay down a plethora of biodiverse manure to build fertility and interact with soil biology, making a rich place to plant crops the following year.”

Next year, Zack aims to improve his forage plan, which will include multiple forage species with multiple planting dates. He has already planted cereal rye this fall. Since the mobile barn doesn’t revisit the same swath for at least a month, he may try reseeding off the back of the mobile barn. He and Shelden will also experiment with integrating cattle into the system. As for his crops, he wants to grow corn and field peas as feedstuffs for the livestock.

The profitability plan includes direct-marketing pasture-raised meat. Zack explains it as “walking the value off the field in non-commodity form.” As Zack told Amy Mayer, with Iowa Public Radio when she interviewed him for a story about his stock cropping set up that aired Oct. 23, he foresees that a farmer could eventually put 30 ClusterCluck mobile barns on an 80-acre field and, in addition to crops, raise 200 sheep, 200 goats, 450 pigs and 9,000 chickens in a season. That level of livestock integration would require dedicated livestock workers, and probably a marketing person or team. Creating jobs on a diverse farm operation, Zack says, will help make living in a rural area plausible for families that don’t already own land and don’t see a path toward buying it. “I don’t know that we could get back to 16 [families], but man, if it was eight instead of one, what a change that could be for rural communities.” 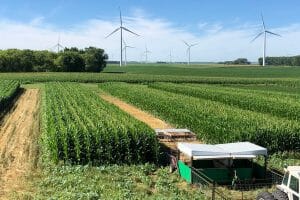 Zack Smith coined the term Stock Cropping and defines it “as the intersection and cross leveraging of livestock and crops together in the field.