Tucked near Spring Grove, Minnesota, in southeastern corner of the state, Dayna Burtness and Nick Nguyen started Nettle Valley Farm by purchasing 67 acres of woodland and pasture in 2015.

After three years of living in a camper without running water on their farm, they had the opportunity to purchase a nearby homestead in the spring of 2018. This accelerated their dream of starting an incubator farm. With permanent land access, they could install the infrastructure – like a well, barns and storage space – to support beginning farmers. 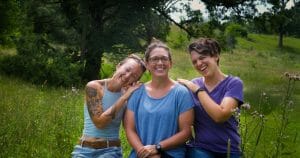 Dayna’s journey learning and starting to farm eventually led her to southeastern Minnesota, where her father grew up. Even though she was raised in the suburbs of the Twin Cities, she is the sixth generation to farm in Houston County. Being a generation removed from farming didn’t stop Dayna from jumping in with both feet. Before starting Nettle Valley Farm, she worked on an incubator farm in Northfield, Minnesota. Here she was able to make mistakes and learn from others before investing capital into her own land and farm business.

An incubator farm is a place or project that aims to minimize barriers to entry for aspiring and beginning farmers. This is typically done by providing land, resources and training to new farmers. Seeing the value Dayna got from her time on an incubator farm, and wanting to provide that for others, Dayna and Nick were mindful of their goal to become an incubator farm host as they were looking for farmland. “We felt it was really important to provide a space between learning and working for other farmers,” Dayna says, noting that many beginning farmers have to leap straight from working for someone else to incurring all the expenses associated with starting their own farm, such as getting a mortgage and buying their own tractor or other infrastructure.

“We felt it was really important to provide a space between learning and working for other farmers.” – Dayna Burtness

At the end of 2018, she and Nick put out feelers for aspiring and beginning farmers to join their incubator project. They created a program that would let these aspiring farmers bring on their own enterprise that would complement the land and enterprises Dayna and Nick already had. As beginning farmers themselves, Dayna and Nick didn’t want to serve as trainers, but as mentors who were sharing resources. “When we envisioned the program, we knew we wanted to make it clear from the get-go what this isn’t,” Dayna says. “It’s not an internship, apprenticeship, commune, cooperative, job, collective or intentional community. Those can all be wonderful things, but we had a specific vision given our own personal strengths and weaknesses.” Setting this expectation was vital to creating a successful program. 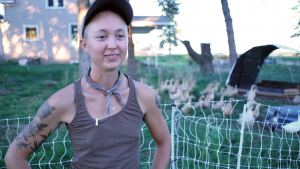 In 2019, Bailey Lutz and Heidi Eger each started their own enterprises on Nettle Valley Incubator Farm. Both brought their prior experiences and passion for farming. Bailey, who uses the pronoun “they,” started Listenmore Farm, raising ducks and goats. Heidi operates Radical Heart Farm raising chickens and sheep. Both also live on the farm in Dayna and Nick’s farmhouse – a beneficial arrangement that lets them be close to their livestock while reducing the burden of finding and affording off-farm housing. Bailey and Heidi each pay a monthly cash rent to live in the house, and then help out on the farm 12 hours a month in exchange for participating in the incubator farm program.

Bailey started their farming experience through a workshare with Sin Fronteras Farm and Food. Through a job with the local food co-op Bailey, was able to connect with Eduardo Rivero, the owner of the Sin Fronteras, which supplied food to the co-op. Bailey says the workshare offered important insights into what it takes to produce food. “During the end of this workshare, something clicked for me and I knew I wanted to keep farming,” they say. Bailey then learned of a farm in Wisconsin that was using livestock to restore a native oak savanna. Apprenticing on that farm completely changed Bailey’s perspective on farming. Soon after the season ended on the Wisconsin farm, Bailey learned of Nettle Valley Farm and decided to pursue their own farm business, Listenmore Farm, through Nettle Valley’s incubator program.

“The incubator program at Nettle Valley lends different support systems – Dayna and Nick, fellow incubatees, the different communities we’re able to tap into – and also provides space for relatively low-risk experimentation with your enterprises,” Bailey says. “There’s room for mistakes, people lend support when things go really wrong and there’s a circle to celebrate successes. I’ve been very fortunate to get my start in growing into the farmer I want to be at Nettle Valley.” Next season, Bailey plans to cease their duck enterprise and focus on raising meat goats.

Heidi’s journey included spending six years working for different farmers, seeing different types of production and operations, before deciding it was time to start her own farm. “Working for other farmers has helped me figure out what I like and don’t like in terms of enterprises, community and farm business,” she says. After meeting Dayna at a local field day, she learned about the incubator program. Knowing her own tendency for tunnel vision when pushing towards a goal, she was looking for lower-risk ways to start a farm. Being part of Nettle Valley’s incubator program has given her vital support and community around the farm she is looking to build. After finding some Katahdin-Dorper sheep, Heidi was able to trial a grazing operation and fell in love with sheep.

According to Nettle Valley Farm’s website, the purpose of the incubator program is to support and help launch beginning regenerative farmers by providing access to collaborators, land, shared equipment, business coaching, low interest microloans and joint marketing opportunities for one to three years. None of this would happen without solid communication among all those involved. When Bailey and Heidi joined the program, Dayna and Nick wanted to start off on the right footing. This led them to hire Martha McFarland, of Hawkeye Buffalo & Cattle Ranch near Fredericksburg, to guide them in facilitating communication and setting expectations.

Martha guided everyone through a full day of exercises and conversations, ending with a list of agreements about how to treat one another and a document about house and farm rules. This understanding helped Dayna, Nick, Bailey and Heidi create simple systems that have helped them live and farm well together on a daily basis. They started the season with formal check-ins every other week, which changed to an as-needed basis by midseason. Martha now serves as an outside sounding board and mediator in case any large conflicts arise that cannot be dealt with internally. “I think it’s imperative that whatever kind of incubation program a farmer or landowner would establish, they are clear and explicit about expectations,” Bailey says. “Clear communication is the backbone of a successful program.” 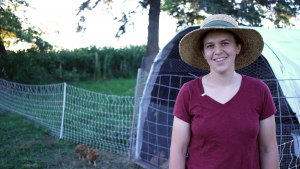 “Humans are messy and I wouldn’t want anyone to think that it’s been completely smooth-sailing,” Dayna says. “Everyone realizes that things will not always go as planned and there will be disagreements. But they all realize that keeping communication open is foundational to making it all work. We all have strong personalities and our own quirks, visions and communication styles. When you put a bunch of people, working towards a common purpose but living together, working together, socializing together, it’s a lot and there have been conflicts we’ve had to work through. But in the end that’s okay.”

Dayna and Nick have have enjoyed the challenge of launching their incubator program, and have found ways to improve. “We quickly discovered hidden expectations that hadn’t been made explicit,” Dayna says. “For instance, my philosophy for incubatees is that when it comes to an idea for an enterprise, I will share my advice and opinions, but then I will stand back and let them make their own decisions and mistakes. Turns out Heidi was expecting an incubator farm to be more like an egg incubator – safe and protected from risk. Major difference!”

Since starting the incubator program, Dayna and Nick have helped bring community to Nettle Valley Farm – but they have also realized the important role their neighbors play in their success. For instance, Dayna says that when faced with challenges such as machinery repairs or caring for sick animals, the advice and support of neighboring farmers has been important.

Participating in building community can decrease the feeling of isolation so many farmers feel, especially in the throes of the season. “It has also been wonderful to be part of an incubator farm community that is an active member of the wider community,” Heidi says. “Many farms I have worked on have felt isolated from an intern’s perspective. Here, we know and visit with our neighbors, have folks over to dinner every week and attend community events.”

“It has . . . been wonderful to be part of an incubator farm community that is an active member of the wider community.” – Heidi Eger

The sense of community is also fostered through sharing in each other’s successes and struggles. The sense of being part of a bigger whole flows both ways. “I love feeling useful when I get to help them out with something I have learned in my years of farming,” Dayna says. “I love that we have each other to celebrate our successes. But there’s a lot of hard things we all deal with on a daily basis, and we have that built-in support network.” Working together has meant Dayna, Nick, Bailey and Heidi have all learnt more about different enterprises and how they all work together to improve the ecosystem. The group is also able to support one another when additional labor is needed, such as when it’s time to process the ducks or broilers. “We all have more to learn about grazing our respective species,” Heidi says, “but are connected by a desire to improve the health of the valley.”

Dayna and Nick would love to see more incubator farm programs that create opportunities for beginning farmers to get started and build community. Right now, Dayna says the concept isn’t all that common. But she thinks the idea would gain more traction if more programs like theirs were available. “Even as recently as 50 years ago, the most common way to get into farming was just to be born into it,” she says. “You just had your mom and your dad telling you what to do and teaching you. But now as farming has changed so much, we don’t have as many of those traditional avenues.”