A year after the COVID-19 pandemic began, farmers are still struggling to find harvest appointments at local lockers – which shouldn’t come as a surprise, as lack of small- to-mid-sized meat processing facilities has been an issue for decades. The pandemic, however, revealed just how dire the situation had become, and it has proved to be the catalyst Iowa needed to start tackling the problem.

In the pandemic’s wake, we are now seeing new meat processing facilities open their doors and existing facilities work to expand. This renewed focus on addressing our state’s lack of meat processing capacity is a silver lining amid a year of challenge, sacrifice and uncertainty. According to Janis Hochstetler and Kathryn Polking with the Iowa Meat and Poultry Inspection Bureau, 24 new custom-exempt facilities are slated to open in 2021. These businesses will help alleviate some of the processing backlog and need – but it’s only a first step. To fully serve the needs of Iowa farmers, we need even more custom-exempt, state inspected facilities, as well as additional federally inspected facilities, to meet the demand.

Securing the finances to put up a new plant is a massive challenge. A new small-scale brick-and-mortar facility can cost anywhere from $700,000 to $2 million (or more) to build. Two plants in Iowa, both custom-exempt, found innovative ways to start their businesses by using existing infrastructure to minimize prohibitive costs.

Curtis Van Grouw operates Iowa’s second mobile slaughter unit for red meat, which opened in February 2021, exactly one year after he started working with Iowa’s Department of Agriculture and Land Stewardship to make his facility an official establishment processing pigs, cows, sheep and goats. Serving a 30-mile radius around Rock Valley in northwestern Iowa, Curtis offers on-farm slaughter. Animals are dressed on the farm, then loaded into a reefer truck (an old frozen pizza delivery truck) to be taken to his family’s farm where carcass cooling, cutting, wrapping and freezing take place. 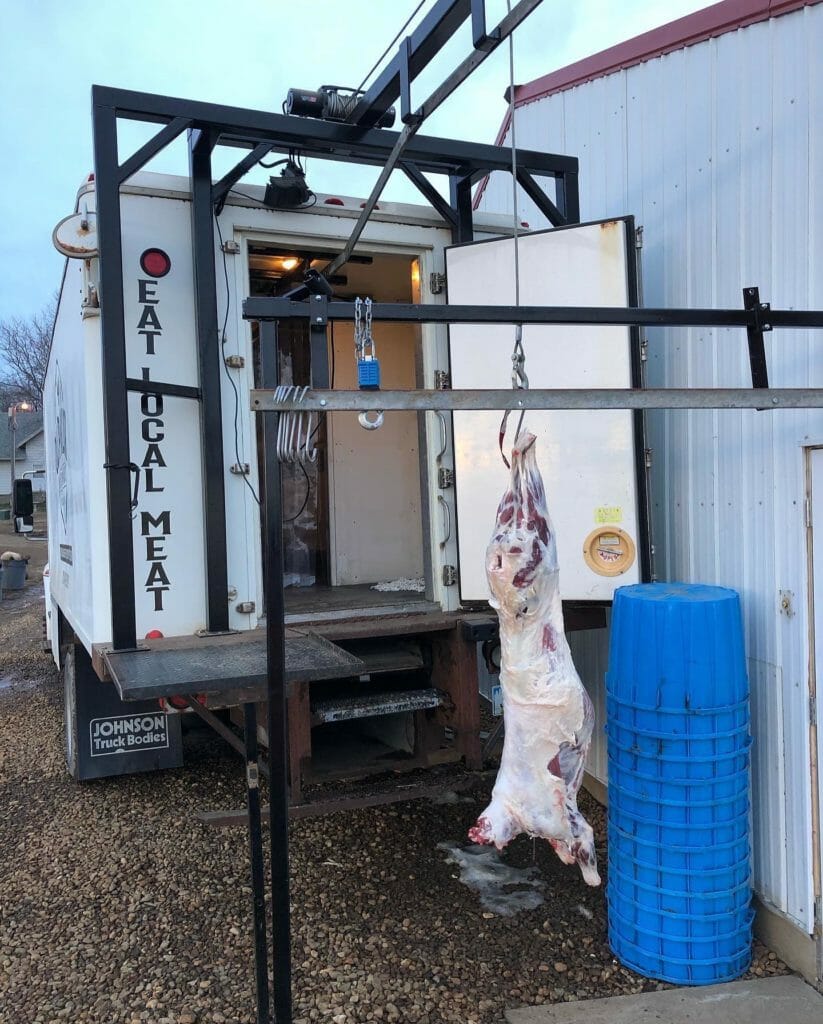 Curtis was raised on his family’s dairy farm that stopped operating as a dairy in 2011. The old milk parlor and milk house provided the infrastructure shell needed for meat processing: washable walls, cement floors and drains. Curtis retrofitted the facility with better insulation and improved walls, but the structure provided a solid starting point – plus inspiration for the Old Parlor name. “I wouldn’t have chosen this business if I didn’t already have the infrastructure to start with,” Curtis says. “We had a 100% leg up because we had a dairy.” This begs the question: Could other empty parlors and milk houses in Iowa be used similarly?

“There could probably be a few more operations in my county alone and I wouldn’t see much of an effect on my business because the need for processing is so high right now.” – Curtis Van Grouw

The Department of Natural Resources helped advise Curtis on installing a wastewater tank, and he was able to use an existing leach tank that was used for the dairy operation. He transports full tanks of wastewater to a local water treatment center for proper disposal. Offal, like guts and hides, can be left on the farm where the animal is slaughtered, and a local rendering company picks up trim and bones from his facility.

Curtis chose to operate a custom-exempt plant instead of state-inspected plant for a variety of reasons. “I have no desire to sell retail meat, mainly because our facility is on our family farm and we have young kids running around, so we don’t want retail traffic,” he explains. “Also, custom-exempt was the easiest way to get up and going and required the lowest level of paperwork.” He adds that he has been staying plenty busy with just the custom slaughter work. “I am saying no to people more than I am saying yes. There could probably be a few more operations in my county alone [Sioux County] and I wouldn’t see much of an effect on my business because the need for processing is so high right now.”

The fee for slaughter is $75 per animal, which includes transport of the carcass back to Curtis’ cut-and-wrap facility. Animals destined for slaughter need to be contained to a small pen. On-site electricity is nice to have, but not a necessity since Curtis has a generator in his truck. He also has water in a tank on the truck, and farmers are not required to have a drain. Curtis provides a cradle to elevate carcasses off the ground, then hoists them for dressing, followed by hanging them on the rail in his truck cooler.

Back at his farm, where the cut-and-wrap facility is located, beef is aged for 14 to 21 days; pork, lamb and goat are aged for one week. Curtis then breaks the meat down into various meat cuts – known as fabrication – freezes it and calls the farmer to come pick it up. He keeps his cut sheet simple and offers bratwursts and sausages. At this time, Curtis doesn’t offer smoking or curing so he can move as many animals as possible.

Reflecting back on why he chose mobile over stationary slaughter, Curtis says: “During the process of getting started, there were many times I thought this would be easier as a stationary facility. But as the pandemic unfolded, I just wanted to be up and running, which the truck allowed for. If I wanted to intake animals at the home facility, it would take more renovation.”

One drawback to mobile slaughter is that he can’t take the truck out in frigid cold temperatures or blizzard conditions. But the mobile unit lets Curtis get out to farms, which he enjoys, while enabling farmers to watch the process. “I look forward to talking to farmers about the animals and providing a low- to zero-stress slaughter situation for both the animals and the farmers.”

To fund this endeavor, Curtis brought the idea to his local community bank, where he has a personal account. The bank saw the potential and opportunity in his idea and offered Curtis a loan, which he called a painless process. Within the next five years, Curtis hopes to grow from being a one-man show to hiring part-time help. He attended Dordt University in Sioux Center, Iowa, and would like to set up an internship program with the agriculture department to teach the art and science of butchery to the next generation.

West of Iowa City, Iowa, in Johnson County, is Black Diamond Halal Meats, located inside an old corn crib. Owned and operated by El Sadig and Barbiker, this plant received its IDALS license to operate in December 2020 and provides custom-exempt slaughter for sheep and goats. Ed Williams owns the corn crib and farm it is located on, and rents the facility to El Sadig and Barbiker to operate their business. Before the plant could be approved for operation, many pieces had to be put in place, including amending county ordinances to allow for this operation to be located in Johnson County. Ed worked closely with the Johnson County Planning, Development and Sustainability team on this effort.

The facility primarily serves the Sudanese community in Iowa City, but is open to any farmer needing sheep and goat custom slaughter services. Customers have two unique options: They can either pick out and purchase a live lamb in the pasture next to the facility, or bring live sheep or goats to the facility to be harvested. Slaughter is scheduled by appointment, and the animals are killed using the halal method and fabricated while the customer waits. Meat goes home fresh with the customer. This model caters to traditional Sudanese culinary customs.

The 1950s-era corn crib, with wooden walls and concrete floor, was built to store ear corn, then retrofitted to store shelled corn. Eventually it was converted into a showroom for Ed’s pellet burning stove business. Now, it is a slaughter facility with a simple interior. The corn crib is 50 feet by 30 feet, and the slaughtering area takes up half that space.

The interior consists of washable walls, erected along the main driveway where wagons used to drive in, stainless steel tables and a meat saw. There are no coolers or freezers in the facility because El Sadiq and Barbiker only produce fresh meat. The meat is cut into 2- to 3-pound pieces, bagged and given to the customer. All of the organs and the stomach (after being thoroughly cleaned) are included.

The facility is approved to process 500 or fewer small ruminants per year. Eventually, if El Sadiq and Barbiker want to grow beyond that number or become state-inspected, they will have to go through a re-zoning process.

“El Sadiq and Barbiker are currently making plans to add chicken processing to their services, which requires a separate room,” Ed says. “They also would like to add another facility in central Iowa to serve Sudanese and other Muslim communities near Des Moines.”