Anne and Landon Plagge are using their cover crop and small-grain expertise to strengthen their farm and local community.

For Anne and Landon Plagge, a desire to support their community is at the heart of their decision-making process. This desire has led them to invest in local projects, people and their land. The two met in Latimer, a town of 500 in north-central Iowa, and are now settled on Landon’s family farm. With his father and uncle, Landon farms 3,800 acres of owned and rented land raising corn, soybeans, oats, rye and hogs. 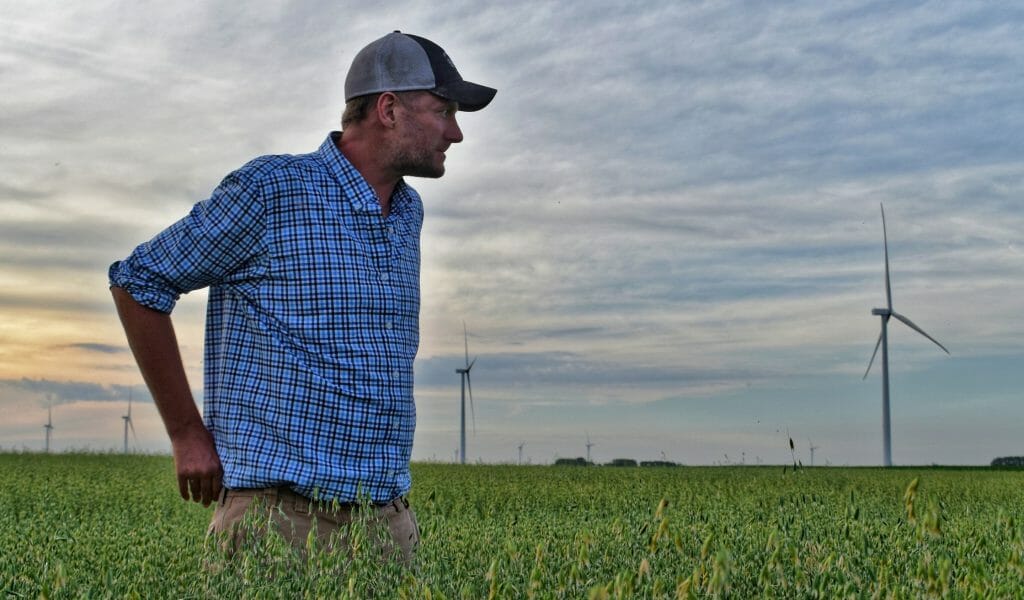 Anne does the cover crop marketing, telling the story of what they do and why choosing cover crops is so important. She is also adding a pumpkin, sweet corn, and sunflower patch to the operation. Outside of the farm, she works at the Iowa Department of Public Health in early childhood home visitation and has a doctorate from Iowa State University in human development and family studies.

Landon always knew he wanted to farm, but he didn’t jump in right away. After graduating from high school, he spent a year as an exchange student in Australia where he learned about other farming practices, specifically no-till and cover crops. The farms he observed were a stark contrast to the black dirt he was used to seeing around his home farm in Iowa. This sparked his curiosity. He returned to the family farm while attending college and helped his dad and uncle. 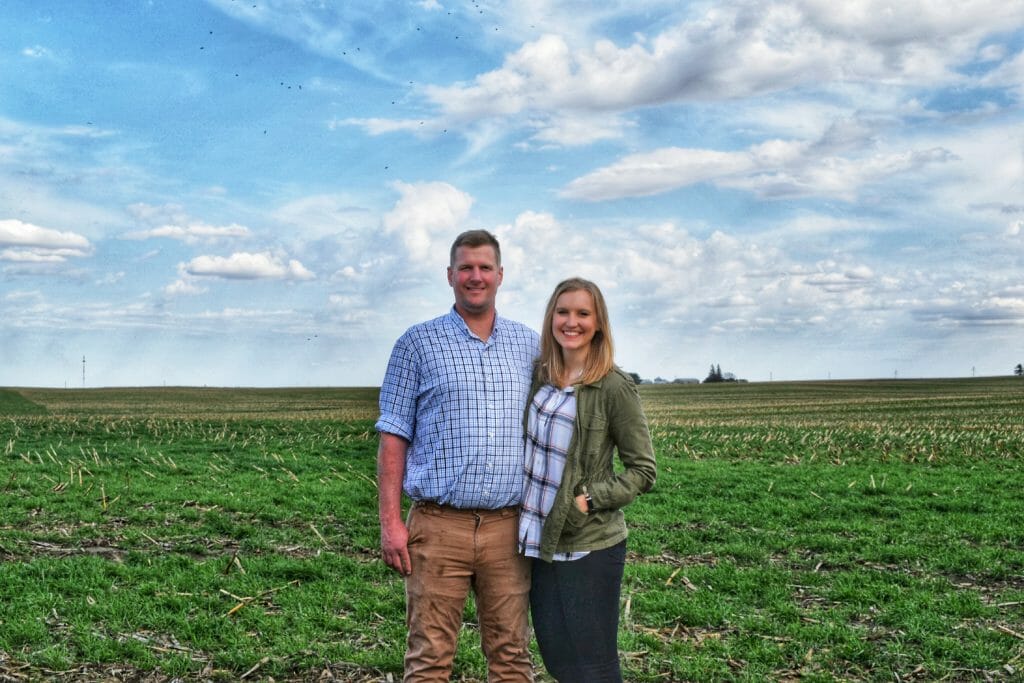 Then, in 2012, wet conditions prevented the Plagge’s from sowing 500 acres. In a spur-of-the-moment decision, Landon planted radishes on an otherwise empty field. By the time autumn rolled around, the radishes were large and their vegetation was thick, allowing the Plagges to apply their hog manure easily and have it soak into the ground. The next spring, that field of radishes was the first to get planted. The ground was easier to work than their other non-cover-cropped fields, and it yielded the highest. These observations led them to think there might be another way they could be farming.

It took roughly three years of experimenting to find out how to make cover crops work on the family farm. “In those early years, we were looking at two fields right next to each other,” Anne says. “The number of worms and the quality of soil in our field of radishes sold me on cover crops. You can see it with your eyes that the cover crop is doing something really positive for the field and building stronger organic matter.”

Early funding from the Conservation Stewardship Program helped the family commit to doing no-till and cover crops on half their land. Now they use cover crops and no-till on every acre.

Three years ago, Landon decided to plant oats, primarily so he could install pattern tile to improve drainage in one of his fields. That year, seed oat prices were also remarkably high and he thought he could save some money growing them himself. He had never grown oats before, but his dad and uncle had and he remembers baling straw as a kid. “We should be able to grow oats here,” Landon says. “Just because no one is doing it, doesn’t mean we can’t.” 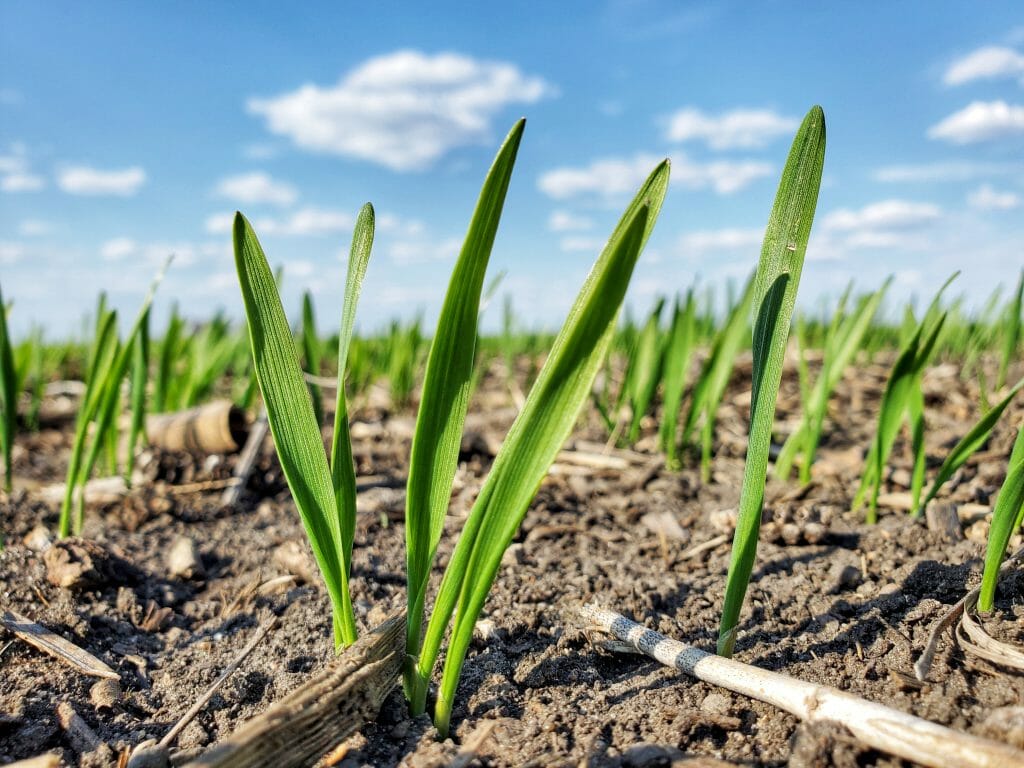 While that first year wasn’t a resounding success, Landon expanded their oat acres in 2020 and grew milling oats for Grain Millers in St. Ansgar, Iowa, which then sold the oats to Oatly. They learned a lot that year. The grain had to be heavy enough to meet food-grade standards, and they weren’t quite able to hit the threshold. But, Landon says, “200 acres was enough to allow me to compare the oats with other parts of our cropping rotation to get a sense of cash flow.”

Along with the oat grain, Landon gained added revenue by taking off some of the oat straw and selling it to a local dairy. The straw was certified as chemical- and weed-free. He says the grain and straw profits together made the oats compete fairly well with his corn and soybeans that year. And it allowed the whole family to be involved, as they worked together to pick up and load straw bales.

The benefits of the small grains go beyond revenue. The Plagges rely on manure for the majority of their fertilizer requirements. By harvesting the oats in July, they can start growing their cover crops in August. They can also apply some of their hog manure in the summer, which will be actively taken up by the cover crop.

“We should be able to grow oats here. Just because no one is doing it, doesn’t mean we can’t.” – Landon Plagge

“Small grains open up our labor window by spreading out the seasons,” Landon says, “and labor is really important to us. Plus, [with small grains] you get all the other benefits that are hard to put a dollar amount on but I know are helping the ground.”

A prime example: The Plagges test the soil in each field every four years, and they have found that their soil organic matter is increasing each year on the acres where they’ve been using cover crops, no-till and small grains.

Eventually, Landon hopes to put all his fields into a three-year rotation, but to do that the family will need to build more local markets for small grains.

In addition to growing oats for milling, Landon is now growing oats and cereal rye for cover crop seed. “I can use the oats and rye seed on my farm,” he says, “but the hope is that I can also sell the seed to my neighbors for them to use as cover crops, and develop a local market.”

Building a cover crop business does take investment. Landon recently purchased an air seeder, which will allow them to get more consistent stands of cover crops and small grains. For their cereal rye cover crop, especially, ensuring they get a consistent, thick stand will let him save costs elsewhere – such as cutting herbicides in his soybeans.

This year, the Plagges also added a seed cleaning and grading facility to their operation. With the seed cleaner, they can separate out their heavy oats from their light oats. The heavy oats will continue on to the milling market, and the light oats, which still have good germination, can be used for cover crop seed. 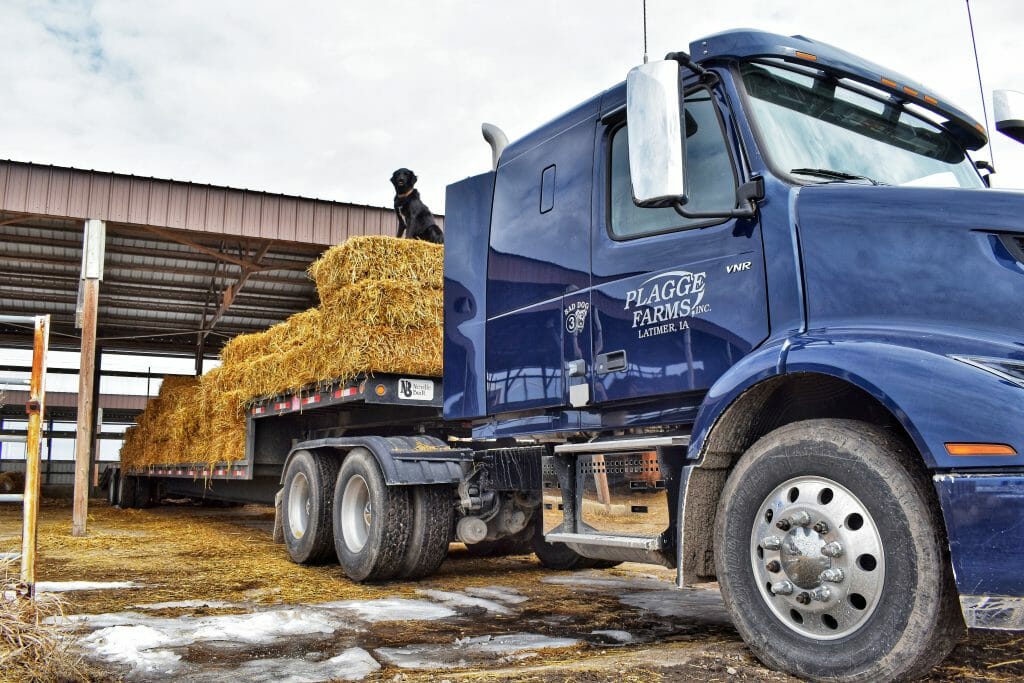 The Plagges harvest the oat straw along with the grain, bringing in an additional revenue stream and allowing the whole family to work together at harvest.

At the core of the Plagges’ burgeoning cover crop seed business is the notion that they want to make cover crops more accessible to other farmers in their area. They see the business as being almost akin to a cooperative business model, where they can do things like trade equipment and give volume discounts on seeds. Landon and Anne hope their cover crop business can add a few local jobs as well. “I want the infrastructure that we have invested on our own farm to be used by others,” Landon says. “I want to make cover crop seed more accessible to the average person in our north-central Iowa area.”

“I want the infrastructure that we have invested on our own farm to be used by others. I want to make cover crop seed more accessible to the average person in our north-central Iowa area.” – Landon Plagge

To help their business grow, last year the Plagges joined the Cover Crop Business Accelerator program, led by PFI and Iowa Soybean Association, to develop a business plan. “The program is a great opportunity to capitalize on skills that we may already have,” Anne says, “and it gives us information and support about how to run our business in the best possible way. We want future generations to keep farming and be successful, and we see cover crops as the way to make that happen.” 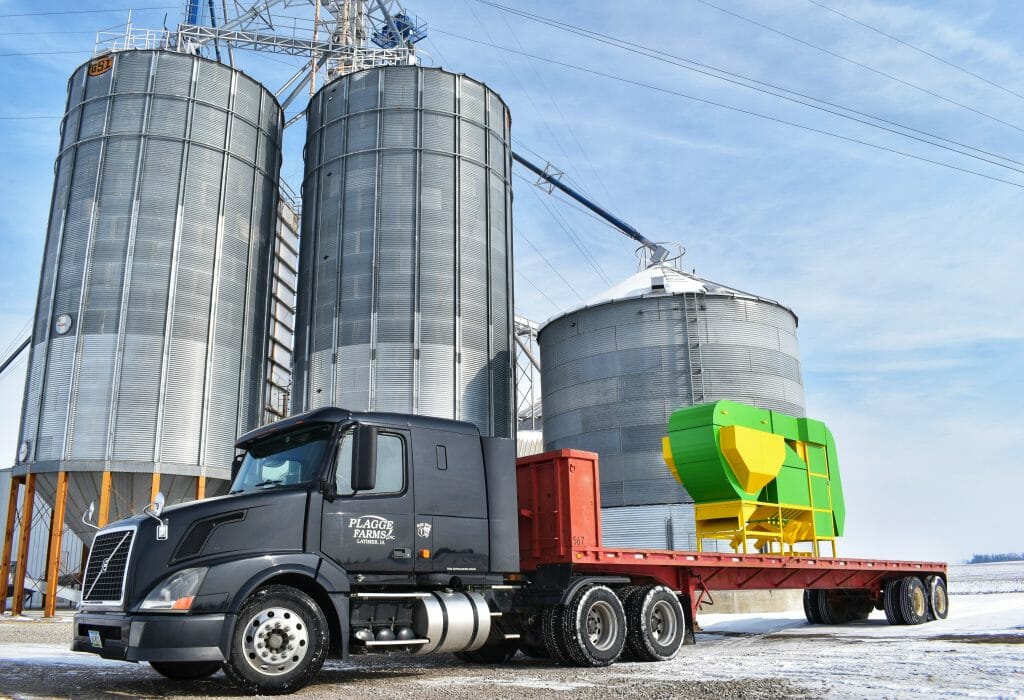 The Plagges purchased a seed cleaner in 2020 for their cover crop business. The seed cleaner (green and yellow) will also be able to separate the heavy and the light oats, which will be destined for different markets.

The local community has taken notice of the Plagges’ endeavors. While Landon used to be the outlier of the neighborhood, others are now interested in having him help them seed cover crops. Last year, Landon was approached by a landowner to farm new ground specifically because of Landon’s experience with no-till and cover crops. To communicate the benefits of their farming practices back to landowners and others, Anne takes photos throughout the year and compiles them into an annual calendar, where they can share their story. 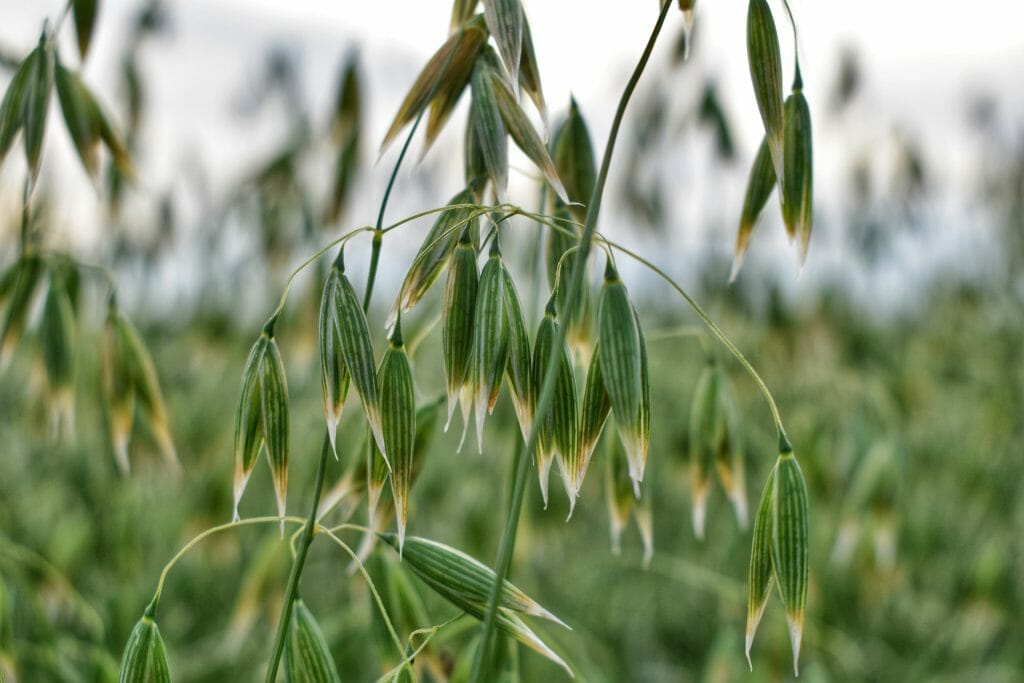 A maturing oat crop. The Plagges grow oats for milling and for cover crop seed.

Building a community in Latimer

The Plagges’ home farm is down the road from another small town, which, back when Landon was growing up, had thriving businesses like a café, bank, library and gas station. Over time, however, those businesses left and the town now feels abandoned. Landon doesn’t want Latimer to suffer the same fate. 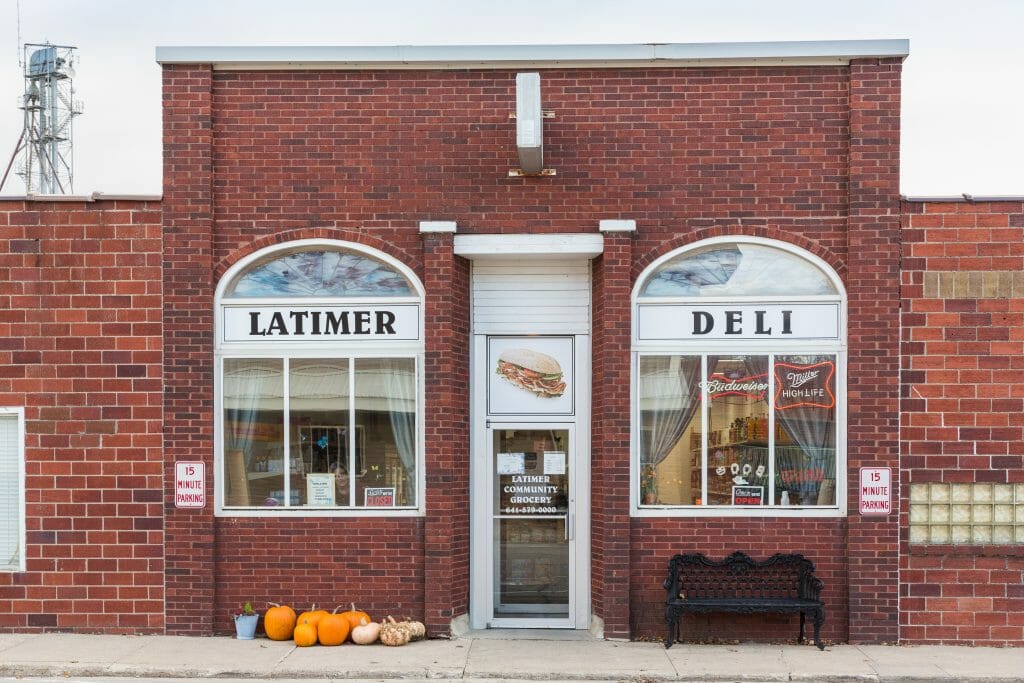 Latimer grocery was reopened in 2014 by the Plagges and another area farmer, and sells grocery staples and deli items.

With a background in social services and the “helping profession,” as Anne describes some aspects of her work, she feels the same way. She understands the importance of vibrant communities that allow young children and families to grow and thrive. And, as she puts it, “if I have hands to help, I will.”

“Our general philosophy is that we want to make our community better than how we came to it and fulfill the potential of what it can be.” – Anne Plagge

All said, the Plagges are staying busy. Landon and another local farmer co-own the community grocery store in town. After the previous owners closed shop, they didn’t want to see Latimer without a place to congregate and buy food. Landon also owns some other local buildings, helping them get fixed up and used for new local businesses, and serves on the city council.

Dogs love oats too. The Plagges’ shelter dogs, Ivy (left) and BJ (right), enjoy their time in the oat fields.

For her part, Anne is active in the local community development board, the county conservation board and the local childcare center’s board – and the Plagges have supported their local animal shelter by adopting their dogs, Ivy and BJ, from there. “Our general philosophy is that we want to make our community better than how we came to it and fulfill the potential of what it can be,” Anne says.

Together, they’re putting down roots on their land and in their community. They hope others will join them. 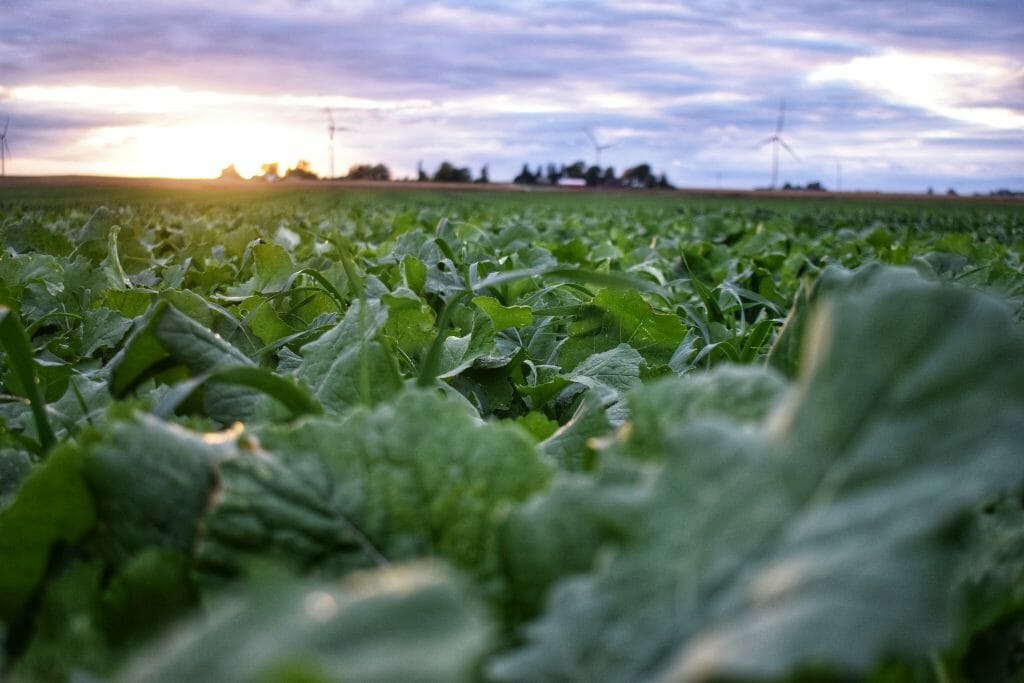 A turnip, radish and oat cover crop stand. The Plagges want to help others in their community adopt cover crops.