Carbon sequestration, and climate mitigation more broadly, are hot topics right now. But mitigation is only one of three legs necessary for a sturdy approach to climate change. Just as important and pressing for many wildlife species, including insect pollinators, is their resilience to the impacts of climate change and their ability to adapt quickly enough to survive changing conditions.

Invertebrate pollinators such as bees, beetles, butterflies, moths, ants, flies and wasps provide critical ecosystem services and form the foundation of many food webs. It is not an exaggeration to say that they are one of the most important functional groups of organisms on the planet. According to the Xerces Society, an invertebrate conservation non-profit PFI regularly partners with, they are also one of the most threatened and fastest disappearing groups of organisms on Earth. In a 2019 report titled “Declines in Insect Abundance and Diversity: We Know Enough to Act Now,” Xerces Society scientists cite habitat loss and degradation, pesticides and climate change as the primary drivers of insect decline globally and argue that urgent action is needed now to reverse this trend. 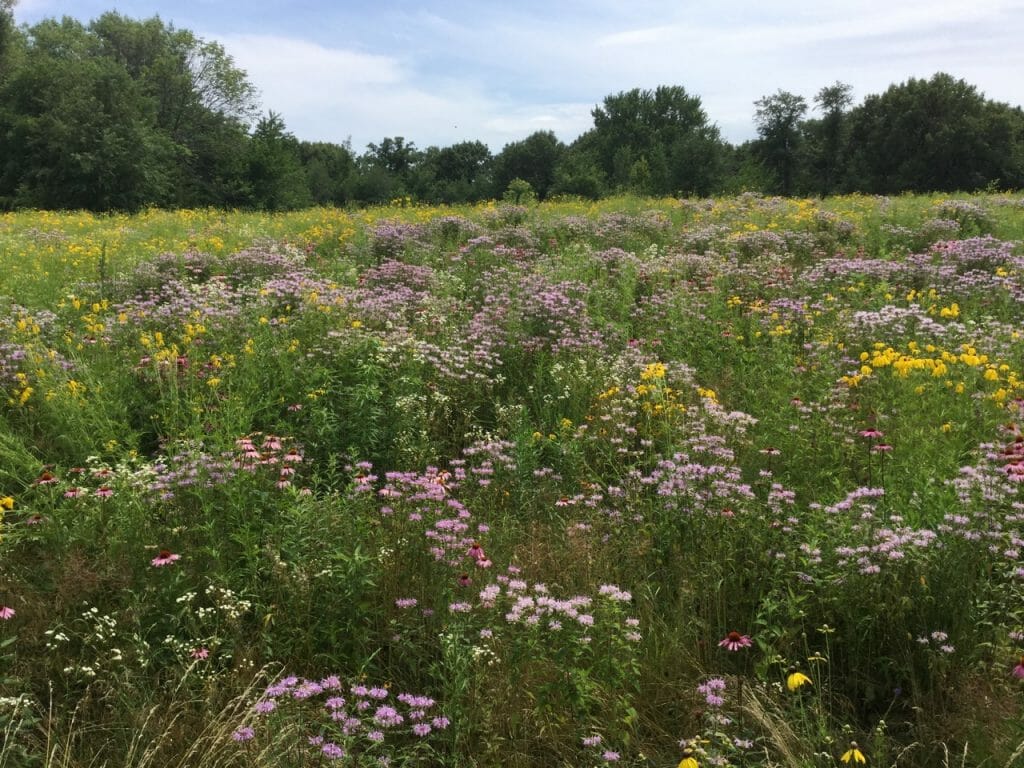 Once dominated by brome and fescue, a diverse restoration of native grasses and wildflowers in Winneshiek County, Iowa, provides critical habitat for insect pollinators. Image courtsey of U.S. Fish and Wildlife Service

One obvious threat is habitat loss. This is especially true in Iowa, where agricultural intensification over the past half-century has not only transformed the state into one of the most productive landscapes in the world, but has also resulted in the loss of over 99% of the native tallgrass prairie that historically sustained enormous numbers of insects, especially pollinators. Another major threat is the widespread use of pesticides. Here in the Corn Belt, these chemicals are used mainly to control agricultural pests. But insecticides are not selective enough to target only those species. Adding to the challenge is the ubiquitous use of neonicotinoid insecticides in seed coatings. These chemicals are highly water-soluble, spread easily in the environment, persist for a long time in soil and water and are extremely lethal to insects in very small quantities.

These impacts can affect pollinators in a variety of ways. For instance, a warming climate and prolonged periods of extreme temperatures can be lethal to many insect species, or cause significant stress that weakens their ability to thrive. Climate change also has the potential to amplify and accelerate the largest threat facing most pollinator species: habitat loss.

Over the next several decades, non-native invasive species and some aggressive natives, like eastern red cedar, are projected to flourish as the climate changes, further threatening what little native habitat remains on the landscape. Such encroachment would severely limit the ability of these degraded habitats to support healthy populations of native pollinators and all the vital services they provide.

And because ecosystems are so interconnected, as pollinator numbers decline, native plants that rely on insect pollination will also decline, exacerbating the loss of habitat. Feeding into the vicious cycle, as high-quality habitat disappears from the landscape, pollinators are also less likely to survive impacts from pesticides and other stressors. These sorts of negative, climate change-driven feedback loops can quickly cause dramatic shifts towards less diverse systems, resulting in corresponding declines in ecosystem function and integrity.

What Can Farmers Do?

Farmers and landowners are on the front lines of Iowa’s land stewardship challenges, and they can and must play a key role in breaking this looming cycle of habitat and species loss. The approach is simple in theory: Restore more highly diverse native habitat to the landscape. Highly diverse communities of native plants, managed using practices like prescribed fire and managed grazing, are the linchpins of resilient systems that can help wildlife, especially insect pollinators, adapt to climate change.

PFI member Erik Sessions recently embarked on a project to increase habitat diversity on his farm. He and his family own 41 acres near Decorah, Iowa, 5 acres of which are devoted to a diverse vegetable farm. Since the early 1990s, the family has kept a large portion of the remaining acres, primarily comprising the surrounding hillsides, enrolled in the Conservation Reserve Program. Some of those areas were planted to a moderately diverse mix of native species, but others were planted primarily to non-native brome grass.

Erik is now working to replace some of the brome with native species. While cool-season grasses like brome are excellent at controlling erosion, they have little value as pollinator habitat. By replacing the brome with more diverse flora, Erik will create vital habitat for pollinators while also making his farm more competitive as he and his family seek to re-enroll these acres into CRP. The process is not easy, however, and the Sessions have sought support from a variety of partners, including the U.S. Fish and Wildlife Service, the Farm Service Agency, the Natural Resources Conservation Service and Prairie Moon Nursery. 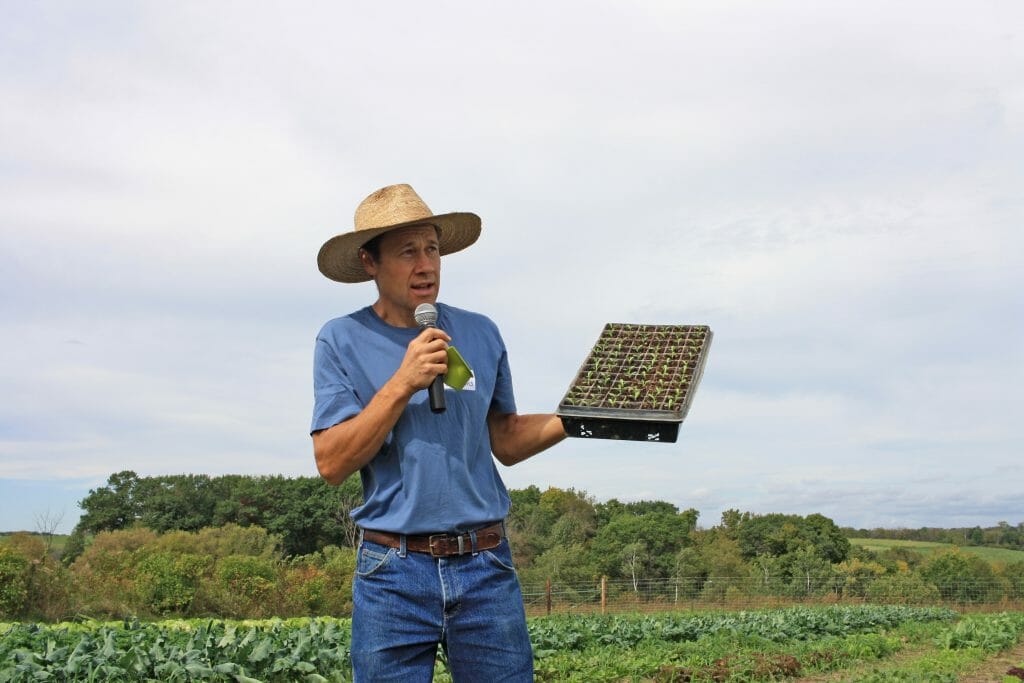 Erik Session explains some of his vegetable production practices during a 2016 PFI field day.

“Our main goal is to get re-enrolled in CRP,” Erik explains, “but I also have always enjoyed seeing what’s blooming and what’s coming up in some of the other prairie we have.”
Erik also points out that adding more native habitat is good for his vegetable production as well. “Gardens certainly benefit from the prairie diversity,” he says. “The surrounding prairie acts as an insectary for all the beneficial insects, and prairie keeps the bees and other pollinators fed for a longer season so they can service the garden.”

For Erik’s farm, efforts to increase diversity have two components. The first is to reintroduce appropriate maintenance practices like mowing and prescribed fire. Erik explains that these are necessary to help promote prairie diversity and control undesirable species. Other maintenance activities include hand-cutting unwanted trees and shrubs and actively watching for invasive species like wild parsnip.

The second component is replanting 2 acres of his CRP ground that’s currently in brome grass with native species. To do so, Erik and his family plan to plow up those acres immediately following a controlled burn and then drill a diverse mix of about 25 species, mostly native wildflowers, into the area. Over the next few years, Erik will mow or burn the area regularly early in the spring when the brome is growing but the native plants are not.

“The goal is to suppress the brome grass while allowing the prairie grasses and forbs time to establish and eventually flourish,” Erik says. “We couldn’t use chemicals because of the proximity to the organic vegetable garden. If the seeding doesn’t take, we’d consider using plugs to try and jumpstart things, but that’s more expensive.”

Erik also hopes the diversity they’re reintroducing on these 2 acres will spread over time to other parts of the farm. He says that he’s been watching native grasses and wildflowers creep into the brome grass over the last several years, and thinks the current effort should accelerate that process. Over time, the goal is for the property to more closely resemble the native plant communities that would have predated settlement. “The land knows best,” Erik says. “We’re just trying to find out where the land wants the diversity to be and help it along. We’re always asking what we can do to encourage the species diversity that should be here.”
He hopes the effort to replace non-native brome grass with a diverse community of native prairie plants will significantly increase habitat diversity on his farm, providing much-needed resources for pollinators and hopefully benefiting his garden in the process. Importantly, adding more native habitat to his farm will help sustain vital insect pollinators, and other wildlife, through the turbulence of our changing climate.