Wet field conditions have extended late into the spring, leaving Emily and Hannah to choose from poor options: delay planting, setting back their whole production timeline and ultimately delaying income, or wade through the mud to plant in wet soil and risk long-term effects from the resulting soil compaction.

Near Grinnell, Iowa, Jordan Scheibel of Middle Way Farm has also experienced frustrations related to soil moisture. A few years ago, he noticed that the equipment he was using to prepare his vegetable beds had created a compaction layer roughly 6 inches below the surface of his heavy clay soils. “That’s right where the bottom of the tiller blade goes,” he says.

Consequently, water was unable to fully infiltrate the soil. He witnessed the results during one extreme rain event, when he says the soil quickly saturated, forcing the rain to run across the surface and sweeping soil away with it. These disconcerting observations, and the practical challenges to their farms, independently led both sets of farmers to consider experimenting with low-till methods of production.

“Up until [2020], I was a rototiller-based farm – I’d never done anything no-till,” Jordan says. “That was how we did all of our bed prep. In 2018, we had 7 inches of rain across two nights on top of ground that was already saturated, and the water simply filled up the soil and started to flow across the field.

“We’re on top of a hill, so there wasn’t flooding from somewhere else. I watched how the water just had to flow across the surface. It couldn’t penetrate down, and I realized how much compaction I had in the field. That started to really turn me toward thinking about if I could get rid of the rototiller, or rototill less.” 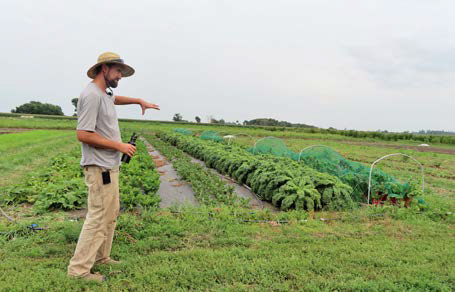 Jordan, Emily and Hannah have each been inspired by the success of Singing Frogs Farm, an exclusively no-till vegetable operation in Sonoma County, California, run by no-till advocates Paul and Elizabeth Kaiser. In addition to raising beautiful, bounteous crops, Singing Frogs Farm is also highly profitable – and the Kaisers say they have seen significant increases in organic matter, soil microbial life and ecological diversity as a result of their practices.

“The story of our experiments with no-till starts with the spring of 2019, when I watched a webinar from Singing Frogs Farm about their no-till technique,” Hannah says. “It was super exciting to me because we’d been struggling with really wet springs when it would be basically impossible to get the tractor into the fields. Even though other conditions were right, we wouldn’t be able to till to get our planting done. So we were looking for ways to build resilience and be able to plant, even if it was consistently raining.”

Benefits and Types of Low-Till Systems

Soil quality is critical on vegetable farms, which often feature intense growing systems with beds turning over multiple crops per season and high-value crops that are directly affected by soil moisture and nutrient availability. No-till and low-till production methods, when correctly used, can suppress weeds and improve soil structure.

Low-till, along with its companion practices and terms – no-till, reduced tillage, conservation tillage, strip-till and ridge-till – are conceptualized and practiced differently by farmers around the country (and the world). For the Kaisers, as outlined on their farm website, nearly every aspect of farm management hinges on the three basic principles of soil management: disturb the soil as little as possible; keep a diversity of living plants in the ground as often as possible; and keep the soil covered and protected as often as possible. 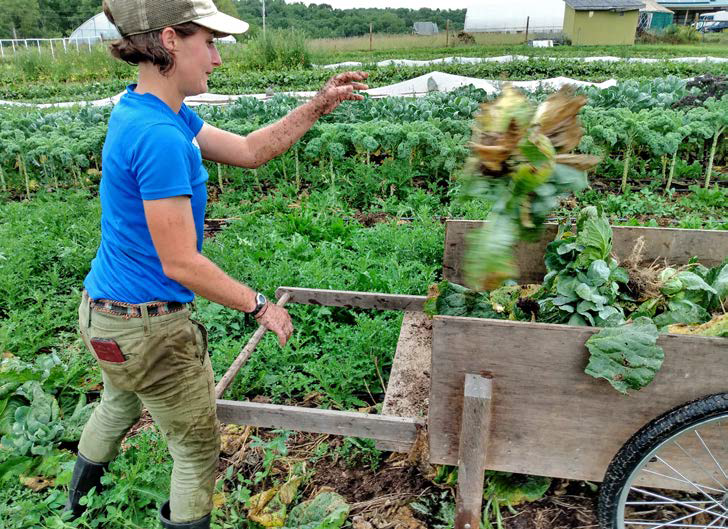 In annual cropping systems, most low-till methods will still include some soil disturbance. But farmers tend to till a smaller area less frequently and only at very shallow depths (1-2 inches). Two of the most popular methods include low-till in permanent bed systems and strip-till.

In the low-till system, production beds are never, or very infrequently, tilled and permanent walkways are built between the beds. Initially, weeds are suppressed by a mulch of the farmer’s choosing. Over time, weed pressure is reduced because new weed seeds are not produced or brought to the surface. Mulches can be any protective covering that’s spread or left on the ground.

In the strip-till system, the farmer shallowly and narrowly cultivates (4 inches wide, 1-2 inches deep) to create a strip of prepared seedbed for direct seeding or transplanting. The rest of the field remains covered by the residue of a previously terminated cover crop. In many vegetable systems, cover crops are killed by rolling, roller-crimping, scything or mowing, or with herbicides. Some farmers are experimenting with living cover crops between rows, such as low-growing clover species.

In 2019, to investigate the potential of no-till vegetable production on their farms, Emily, Hannah and Jordan together applied for and received a two-year grant through the U.S. Department of Agriculture’s Sustainable Agriculture Research & Education (SARE) program.

Realizing other farmers could benefit from what they learned through the project, Practical Farmers of Iowa partnered with both farms, as well as researchers at the University of Wisconsin-Madison and other PFI members, to offer a four-part “Reduced Tillage Vegetable Production Web Series” in August 2021.

The first two episodes featured University of Wisconsin-Madison researchers Rue Genger and Clare Strader, and Dylan Bruce of Wisconsin-based Circadian Organics. All three have been exploring no-till methods with farmers in a statewide community of practice for the last several years and shared findings from research and ongoing projects.

Jon Yagla, of The Millet Seed in Iowa City, Iowa

Closer to home, Iowa City, Iowa-based farmer Jon Yagla of The Millet Seed, featured in the third episode of the web series, has been growing vegetables for about 30 CSA shares on less than a fifth of an acre for the last six seasons almost entirely without tillage. Jon dresses his beds with shredded leaf mulch from the city when he seeds new crops, and strives to disturb the soil as little as possible. For Jon, a no-till approach maximizes production on his small, intensively farmed ground in a manageable, pleasant way that he feels discourages weeds, conserves moisture and builds soil structure.

“I think the no-till is helping,” Jon says. “We have really high organic matter in the soil here, so it holds moisture for longer, and the leaf mulch makes great habitat for worms, which improve the soil too.”

The farmers at Humble Hands Harvest and Middle Way Farm have each had different experiences with their forays into reduced tillage, which they shared in the fourth and final episode of the web series. Emily and Hannah found the practice immediately addressed their initial concern: They were able to get into the field earlier in the season to plant. They did find their no-till beds were more labor-intensive. But Emily says part of the reason in 2020 might be because their zucchini crop, one of three crop types tested in their research that year (they’re still analyzing 2021 data), grew significantly better in the no-till plot.

“The yield from the no-till bed was double that of the tilled bed,” Emily says. “The plants were just huge and beautiful and gorgeous, and the harvest window was very long for the no-till planting. The zucchinis in the tilled planting were tiny and got overgrown with grass very quickly.

“Our labor [in the no-till plot] was triple, which is interesting, but is tempered by noting that we spent a lot of time harvesting that and didn’t ever harvest the tilled bed.”

Some of that labor demand was also due to more time spent weeding by hand, along with performing careful bed preparation during turnover between crops and applying compost. In the end, Emily and Hannah have decided that the benefits outweigh the challenges of a no-till system.

Jordan’s reduced tillage experience so far has been mixed. His approach has always focused on reducing tillage, rather than eliminating it. He has found his most successful system involved tilling, which ultimately stimulates the seed bank prior to using no-till methods. Upon reflection, Jordan sees the most benefit from tillage followed by reduced-till methods continued over a longer period. 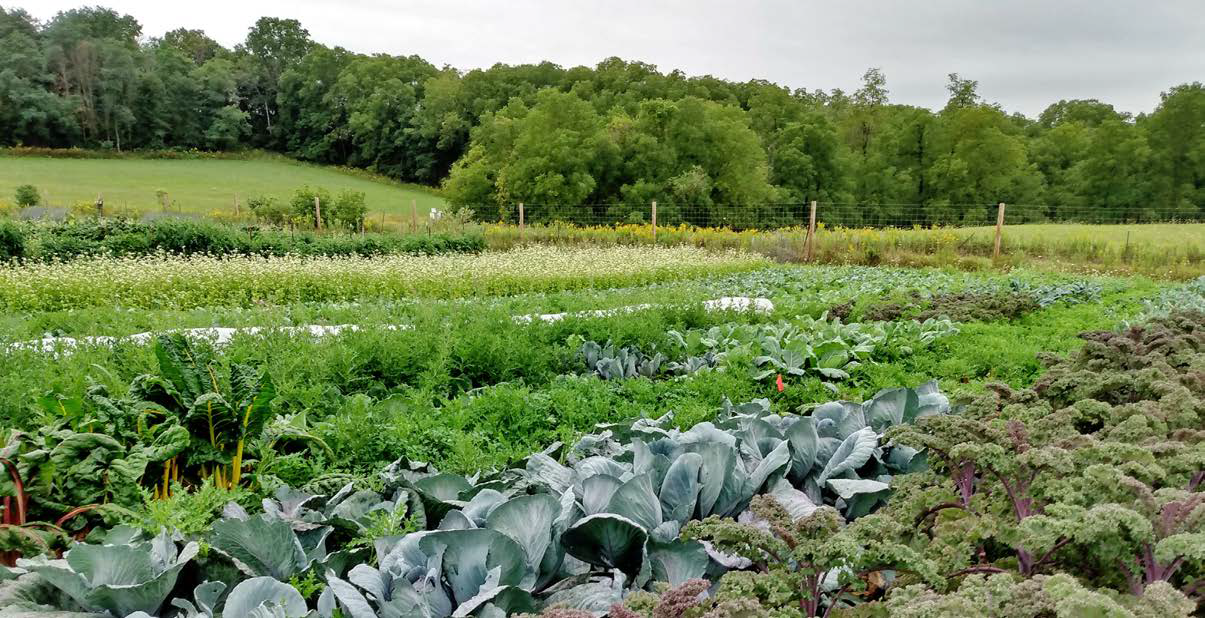 “I’m kind of a fan of tilling first before using no-till,” he says. “You aerate the soil and put in all the long-term amendments before you stop tilling. No-till beds preserve the soil structure. “If I put my hand in a no-till bed, I can feel the pore spaces that have been created by the soil not being disturbed. If you keep that up for a year or more, the benefits start to accrue. I think the hardest part of no-till is just starting out.”

“I’m getting the sense that the establishing phase of no-till is very different from the settled-in phase,” she says. While no-till doesn’t solve all the problems a vegetable farmer faces, it has become a critical piece of the puzzle.

“There is no panacea,” Jordan says. “But no-till has had some benefits and it is an important technique in the toolbox of options.”

Hannah and Emily, by contrast, plan to convert their entire vegetable production area to no-till, in combination with tools like fall and summer cover crops, silage tarps to kill weeds and cover crops, and copious applications of compost for fertility as well as weed control.

“We have been trying to focus on the qualitative things about the differences in the two systems, and we definitely feel better about doing the no-till stuff,” Emily says. “It’s hard work hauling compost around, but seeing gorgeous cabbages – and every plant is happier to have that much compost on it – it just feels really nice.

“And knowing that we’re not totally disrupting our soil structure every time we’re planting something feels really good to us.”

Beneficial Insects - Bringing Back the Edges