A former farmer responds to the stark findings of a Pasa Sustainable Agriculture report.

What is the financial picture for direct-market vegetable farmers? This is the fundamental question of a 2021 report by Pasa Sustainable Agriculture (Pasa), entitled “Financial Benchmarks for Direct-Market Vegetable Farms.” 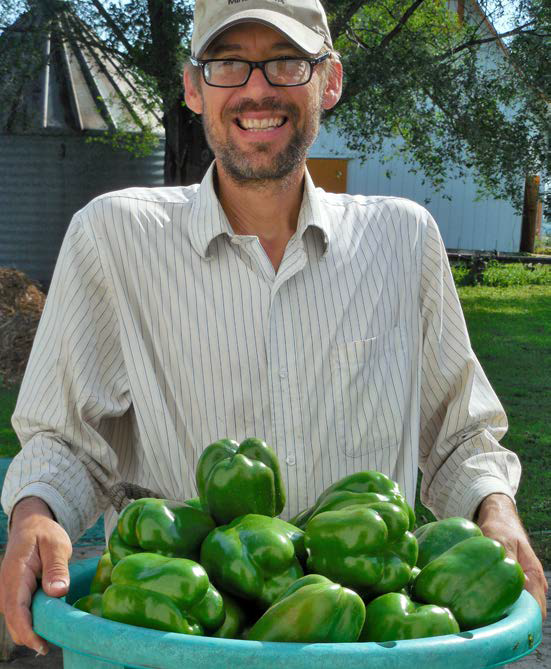 The report’s conclusions are bleak: The farmers surveyed are not making enough money.

The report’s authors reached that conclusion after organizing and analyzing financial data from 39 unique farms in the mid-Atlantic region over one to three years (2017-2019). Some farms participated multiple years, and all had a for-profit motive and “significant” farm revenue from direct-market channels (CSA, farmers markets, direct wholesale, etc.).

As a former direct-market vegetable farmer for about 20 years, I don’t feel the results are that unexpected – or cause for undue concern. The benchmarks on which the Pasa study reported are broken into groupings by acres farmed, and all stem from basic financial data – revenue, expenses, profit. Examples of benchmarks in the report include profit and revenue for just the vegetable enterprises, and for the farm business as a whole.

My favorite ratio is there: net income-to-revenue, which offers good insight into management efficiency. For those more inclined to look deeper into the financial state of affairs of these farms, there are plenty of other benchmarks, such as returns to farmer labor and debt-to-asset ratios.

Many Types of Small Market Farms

Small direct-market farms are popular ventures, not just for young idealists, but for career farmers and those starting second careers as well. Growth of these farms can be seen in U.S. Department of Agriculture census records. In 2013-2014, Iowa State University Extension and Outreach published a statewide directory that included 33 CSA farms. This year, the website Local Harvest lists 131. We also see this trend in our common experiences, such as grocery chains highlighting local produce, popular media enchantment with local foods and even the composition of attendees and topics at the PFI annual conferences over last 20 years. 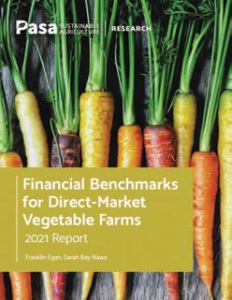 Pasa’s most notable conclusion, and one that encapsulates the report’s tone, is that “most direct-market vegetable farmers are not earning a middle-class income.” The various financial ratios support this assertion, and in fact, they found only about 25% of the farms studied earned above median household income (about
$56,000 per year). The majority of the farms had less than half of this income.

This finding so concerned the authors, it prompted them to call for implementing public programs that support higher incomes, including those that would “focus on equitably increasing farmland access, improving market opportunities, encouraging workforce development, reducing financial risk and rewarding conservation best practices.”

Have we been promoting farming operations that arguably benefit society but relegating those very farmers to inadequate living standards? The answer may not be so clear-cut. While the authors look toward “persistent structural challenges in the agricultural industry” leading to lower-than-average income, it may be worth doing some benchmarking of our own. Let’s take a step back and view the landscape of small businesses in the U.S.

The Federal Reserve Banks keep track of small business finances, and although their focus is credit, their data collection and survey reports are a great source of related information. In 2017, the first year of the Pasa study, the banks reported 55% of non-employer firms in the U.S. did not make any profit. This is not a small group of business owners. It includes over 25 million businesses – 81% of all U.S. small businesses that year. For small businesses with employees, 43% did not make any profit. About 40% of non-employer firms had revenue less than $25,000. Looking more broadly, it appears that small direct-market farm businesses may actually be doing better than their non-farm small business counterparts.

Farm income below median household income may not necessarily mean the total household income is less than the median. It is unclear in this study what part of household income the farmers want, or are currently receiving from the farm. We participated in a similar, albeit smaller, two-year financial benchmark study conducted by Liz Kolbe, then PFI’s horticulture coordinator, covering the years 2013-14. That study of 12 small Iowa farms pondered similar questions and, for the most part, had similar results.

However, that study asked what portion of household income the farmers wanted or needed from the farm operation. Only about a quarter said all their income. To be fair, most sought a significant portion, even if not the entire amount. Almost 20 years ago, Michael Duffy and Erin Tegtemeier reported for the Leopold Center for Sustainable Agriculture on characteristics of CSAs in the Upper Midwest. They found CSA income comprised only about half of total household income.

Unfortunately, they also found these households had much lower income than the average households from the nine states encompassed in their study. An interesting characteristic reported of these farms was that over half felt their economic return too low, and yet almost all were satisfied or very satisfied with their farm operation and planned to continue.

Farmers know whether they are making a living, and if they are on par with state or national income averages. We built our farms for many reasons besides profit parity – particularly for reasons centered around our social and ecological values. It is a way of life we choose. We do, of course, also want to make a decent living. When I began farming, my main mentor was considered a groundbreaker in vegetable farming in central Iowa. She was a good farmer, highly regarded, loved her work, had a “profit motive,” but never made much money. That wasn’t her intention and she was open about it.

As farmers, what we need to know – what is so useful about this report, and why we participate in these benchmark studies – is to see how we rank and what is possible. The Pasa report recognized how important it was for farmers to meet and openly discuss finances. What efficiencies have others achieved that we can achieve? Knowing that there are small market vegetable farms having net income ratios greater than 40%, or several with per acre revenue of $20,000 or greater, confirms we can make decent money. In this report, we know that 25% of the farmers included did make at least a median household income.

I’m of the opinion that organizations supporting direct-market vegetable farmers could, in their work and outreach, better use farmers who are proven to be financially successful. These farmers have good systems management and other business skills that benchmark themselves high against their peer group. These farms need to be toured. The farmers running them need invitations to speak at events – they have valuable things to say, and they should be paid well for their insight and time.

Financially successful farmers are underused precisely because of their success. These are exactly the kind of farmers that go to fewer events, apply for fewer grants and participate in fewer studies – they are too busy running their businesses well. Too often during my career as a direct-market farmer, I saw the opposite manager showcased. It was not uncommon for unsuccessful farmers – both in production and finances – to be featured prominently in local food venues merely because they enjoyed participating, were generally available and were often likable, even charismatic.

In the Pasa report, farms in business over 10 years increased their income to decent levels and had a significantly higher net worth than the average Pennsylvanian. This seems very encouraging, and again, also reflects the experience on my farm. We never exceeded the average Iowa household income. But we had enough money that around the five- to seven-year mark, we no longer felt financially insecure. We completely paid off our farm in year 11. At that point, our main concerns were really eating well, serving our customers and improving our natural resources.

When we began growing vegetables, it took several years to even make a profit. We also had saved money and accumulated ample relevant experience before we bought the farm. It was hard, sometimes brutal work. We also worked off-farm jobs the first few years. Some early years we never attended a movie or ate at a nice restaurant. Gradually, however, our efforts paid off. We gained equity in the farm, we were able to make strategic investments to improve our efficiency and we evolved our farm management so that we had stable, sufficient income.

During our tenure as vegetable farmers, many direct-market farms came and went. Some were undercapitalized, some lacked agronomic knowledge and experience, some lacked basic business skills. We saw good farmers with low marketing skills struggle (including ourselves) and poor farmers with good marketing skills succeed (at least financially). Some expanded too fast. Some were too small to overcome the fixed expenses of the farm and provide enough extra to be the main household income. It doesn’t seem reasonable to expect all small farms (or any particular type of business) to make a median household income at all stages of their development.

Programs, policies and money have limited benefits when compared to time, experience, consistency and good business skills. Like any small business, some people will be well suited to it and others will not. A decent portion will persevere and prosper through hard work, some luck and constant evaluation and improvement in their farm business.

It may be that the best assistance we can offer beginning farmers is to provide them with honest feedback on the viability of their business plans, communicate realistic expectations and help them learn from the best examples of successful direct-market vegetable farmers. We know these exemplars exist because we can see them in the Pasa report, quietly and successfully exceeding all the benchmarks.

Rick and his wife, Stacy, are PFI members who managed a small direct-market vegetable farm for about 20 years, 15 near Minburn, Iowa. They thought it would be a good idea to turn an abandoned acreage into a prosperous, model small farm because everyone kept telling them it couldn’t be done.