Angela Smith is using native habitat to build resilience and adapt her farm – and the critters who call it home – to a changing climate. 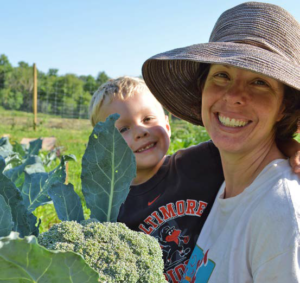 Angela Smith and her son.

Angela Smith and her husband, Erik, moved to Oronoco, Minnesota, in the heart of the Driftless Area, in 2013. Together they own and operate Middle Fork Farm, a diversified fruit and vegetable farm, on the banks of the Middle Fork Zumbro River in Olmstead County, on the traditional and ancestral lands of the Wahepton people.

In the almost 10 years since they moved to the farm, the couple has experienced five significant flood events, punctuated by a catastrophic June 2019 flood that decimated their crops. In 2021, they suffered from the prolonged drought that impacted much of the Upper Midwest, including most of Iowa and southern Minnesota. In addition to having to water crops by hand, Angela’s crops were more susceptible to pests and disease. Then, in December 2021, unseasonal tornado-producing storms ripped through the area, leaving a trail of damage in their wake.

“To me,” Angela says, “these are clearly impacts of climate change”.

Extreme weather cannot always be attributed to climate change, but research from climate scientists support Angela’s observations. According to the National Climate Assessment, the Driftless Area – along with most of the Upper Midwest – is set to experience higher temperatures, increased precipitation in the fall, winter and spring months and decreased precipitation in the summer months.

Climate change will also make these patterns more unpredictable. Storms are expected to bring heavier bouts of rain and snow in fewer, more intense precipitation events. The result: increasingly common but inconsistent severe weather events, including floods and droughts – just as Angela has experienced over the last 10 years at Middle Fork Farm.

Because climate change is a global phenomenon, it can be daunting for farmers experiencing its impacts on their farms to think about how to make a difference. Angela says it helps to know that steps she takes to build resilience on her farm can have positive effects more broadly, beyond the boundaries of her land. Habitat plantings on small farms, for instance, can be vital refuges for a range of species that benefit the wider landscape.

“Small changes can accumulate into big impacts,” she says. “There’s a bunch of big environmental issues out there, and I can contribute to solving them on my little farm.”

Using a systems approach to look at her farm and land, Angela says she thinks about food as well as biodiversity declines, climate change, water pollution and other bigger landscape challenges. While she knows she can’t solve these big issues on her own, they do impact the farm – and her farm is a piece of the bigger system.

Still, it’s not always easy to see a path forward, especially when the challenges are large and varied. Angela’s advice? Think carefully about what you want to do, figure out what you need to make it happen and don’t be afraid to ask for help. She points out that there’s a whole community of fellow farmers and conservation professionals who have a wealth of knowledge and, occasionally, funding to help achieve goals on the farm.

“The community is well-connected,” she says. “Worst that happens is that you get in touch with someone who doesn’t know or can’t help, but they probably know someone.”

Following her own advice, Angela has connected with several agencies and organizations that have helped her towards one of her ultimate goals: restoring and reconstructing as much native habitat on her farm as possible.

Angela’s observations on her farm resonate with a growing body of science. According to the Xerces Society for Invertebrate Conservation, adding more habitat that is both diverse and better connected on the landscape is key to ensuring that pollinators and other insects can adapt to changing climate conditions.

Angela has used a variety of programs and resources on the farm to restore native plant communities. Notably, she’s worked with her local Natural Resources Conservation Service office and received funding through the Environmental Quality Incentives Program to plant native shrubs for pollinators.

“We got in touch with the NRCS office and they were kind enough to come out and look at the farm and listen to what we were interested in doing,” Angela says. “We learned about the EQIP program for pollinators, got that funding and were able to plant a bunch of native flowering shrubs.” 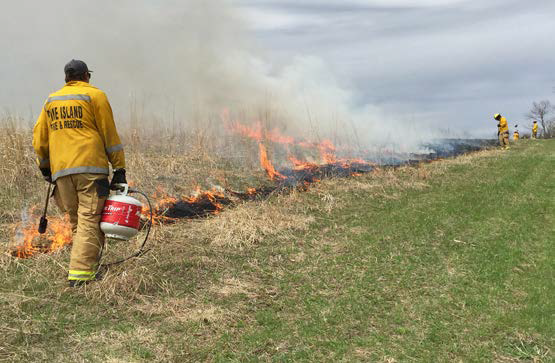 One of Angela’s most important sources for support has been Xerces Society. Angela says that staff from Xerces helped consult on the shrub plantings and are also assisting with a remnant prairie restoration in collaboration with the U.S. Fish and Wildlife Service. Most recently, Angela is working with Xerces to reseed an area of her farm to a highly diverse native prairie mix.

The funding for that project comes from the Wildlife Conservation Society’s Climate Adaptation Fund and the Doris Duke Charitable Foundation through a grant partnership between Xerces, U.S. Fish and Wildlife Service and Practical Farmers of Iowa.

“The newest project is on a south-facing hillside just north of our farm production fields,” Angela explains. “It was nothing but weeds and was very difficult to mow and manage because of the slope.”

The project is actually Angela’s second attempt to restore that particular hillside – the first attempt, also funded by EQIP, was set back by the drought. Angela and Xerces are hoping to redo, repair and improve the restoration this go-around by making it even more diverse, a key strategy for making native plantings climate-smart.

Angela says she’s particularly excited about this project because Xerces let her take the lead on the restoration. Leaning on Xerces staff for advice and resources, she has taken the initiative on tasks like site prep, plant selection and seeding – knowledge and skills that will empower her to tackle future restoration projects.

“That’s been really valuable for me,” Angela says. “Now I feel like I really understand how things happens and that I can do it on my own land moving forward.”

This past winter, Angela and crew broadcast a 110-species native seed mix into the snow. The melting snow and the spring’s freeze-thaw cycle will scarify the seeds and work them in the soil. Angela will have to spend several years managing the planting to make sure it establishes properly, including early and frequent mowing to control annual weeds. But Angela is patient; she says she’s excited for the diversity of native plants – and the pollinators and wildlife they support – that will have a new home on the farm.

“I close my eyes and I imagine a world with lots of habitat – flowers on the edge of the farm fields, less insect and songbird food deserts than we currently have, a vibrant landscape.”

Precision Conservation - Bringing Back the Edges