For generations, the Gordon family has embraced conservation practices to stay resilient. Today, they continue to expand and foster that tradition for the next generation.

Located in rural southwestern Minnesota, just over the Iowa border, Worthington is a small town nestled up next to Lake Okabena, a name adapted from the Dakota word hokah-be-na, meaning “nesting place of the herons.” Spruce, pine and beech trees dot the landscape alongside rolling acres of farmland.

The lake, and the area’s fertile prairies, attracted immigrants seeking new land. In the early 1870s, the town of Worthington was founded by white settlers from New England and Upstate New York who established a farming community along the St. Paul and Sioux City Railroad. In the 1920s, Bill Gordon’s forebears were among those who settled around Lake Okabena seeking to establish their farming legacy.

A fourth-generation member of Gordon Farms, Bill has called Worthington home all his life – and he says a big part of that legacy is based on care of the land and a conservation ethos. 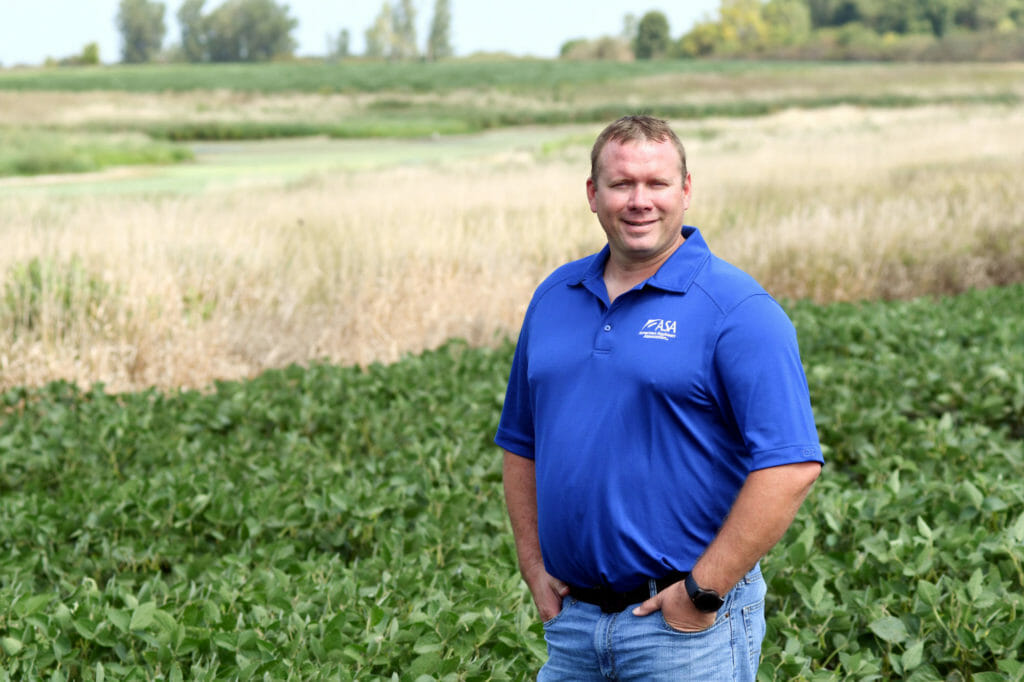 “It’s a generational tradition for us. My great-grandparents saw firsthand the effects of the Dust Bowl,” Bill says. “My grandparents didn’t want to repeat that history. I’m the fourth generation of a family farm, and we celebrated 100 years of farming in this same location in 2020. We have really practiced conservation since the beginning.”

Today, Gordon Farms includes 2,000 acres of corn and soybeans, along with about 250 acres dedicated to wetlands and buffer strips. Bill’s parents, Galen and Colleen, are part of the operation, along with Bill’s wife, Dawn, and their four children. Over the past 40 years, Gordon Farms has taken a more nuanced approach to conservation initiatives.

Using precision conservation – the science of applying the right practices in the right place, at the right time, to maximize both profitability and environmental benefits – the family is pinpointing underperforming areas of the farm and singling those out for conservation efforts.

“It’s possible to create conservation areas on-farm and be profitable,” Bill says, “though that wasn’t always the case. Here we are in the heart of the corn and soybean belt, and yet we still have wildlife. We still have wetlands and trees, and can go out to hunt, fish and enjoy the outdoors, as well as farm.”

The Start of a Family Legacy

Gordon Farms traces its start to Bill’s great-grandparents, Will and Clara, who bought 160 acres of land near Worthington in 1920. Their son, Glen – Bill’s grandfather – was born in 1910 and continued farming on the same land. While Bill says his grandfather was “definitely a traditional farmer of corn and soybeans,” Glen nonetheless started to implement some conservation practices on the farm.

“My grandfather installed the areas with the basin ponds and stopped grazing that,” he says. “Even before all the environmental problems of the ‘30s, Granddad recognized that having some habitat was important. My own dad, Galen, continued on with that tradition.”

While the devastating dust storms so vividly associated with the Dust Bowl era were centered in the southern and central Great Plains, the dust storms hit parts of Minnesota as they swept across the country, reaching as far east as Washington, D.C. Minnesota farms were also hit by the historic heat and drought of the 1930s – which affected 75% of the nation and remains the worst drought in U.S. history. According to the Library of Congress, 19 states in the U.S. heartland “became a vast dust bowl” that forced many farmers to leave their parched fields in search of opportunity elsewhere.

But not Glen Gordon. “He stayed through the whole thing, even with profit all but gone,” Bill says.

The hardships of that era were caused in part by broadscale soil mismanagement. Throughout the early 20th century, farmers plowed millions of acres of drought-resistant native prairie grasses to plant wheat and other crops. When the epic drought of the 1930s came, the over-plowed farmland shriveled and blew away in the wind.

“That really made more people aware of the importance of controlling erosion and taking care of the land,” Bill says.

Galen Gordon, Bill’s father, went to school at the University of Minnesota, majoring in biology before returning to the family farm. Once back, he expanded the conservation tradition. Galen is the individual Bill credits with passing on his love of the land. Together, the family, including a young Bill, planted apple trees as a food source for wildlife and conducted burns to re-establish more areas on the farm that could support native prairie.

“The conservation on our farm started with not wanting to repeat past mistakes. I want my kids to have this pristine land to grow up on and to leave this legacy of care to them.”
– Bill Gordon

“To this day, my dad is still involved with implementing conservation on the property,” Bill says. “I started farming at 10 years old, so I’ve been helping with these efforts for 35 years. We took those lessons learned from over-tilling in the past to create a better farm today.”

As the fourth generation farming the land, Bill has embraced the task of stewarding the family farm and expanding on his family’s conservation legacy. He and his family continue to use conservation tillage on as many acres as possible, as Galen did, as well as plant trees and restore land to prairie. The family uses the principles of precision conservation to guide their conservation efforts. Bill diligently monitors annual crop yields to identify those underperforming areas that would be best suited to conservation practices.

“I don’t use any high-tech survey or sensing equipment, just my gut on lower-yield areas. It’s a method related to more precise conservation practices. I just know that by moving those areas of my land to habitat, it increases the overall health and yield of my remaining acres.”

In establishing habitat, Bill aims to follow the state’s Conservation Reserve Program standards as closely as he can. “We have a lot of areas on the farm that collect water and produce poorly,” Bill says. “We want to keep our profit margins, so we are trying to balance out which areas are consistently profitable versus those fringe areas that are profitable one year but not the next.”

The Gordon family has also donated a parcel of land to the city of Worthington through a program called Reinvest in Minnesota. Their farm sits at the top of the Okabena-Ocheda watershed, which includes both Lake Okabena and Lake Bella, 10 miles to the south. The donated parcel contains a basin with three ponds designed to catch any nutrients coming off their land and surrounding farms.

As Bill and his family look to the future, they are carrying their conservation values forward while trying to create resiliency for scenarios, like climate change, that are outside their control. “With a changing climate, we are seeing rainfall events of 3 to 5 inches, which we’ve never had before,” Bill says, noting that with so much rain at one time, “we can’t stop erosion. That’s why we are creating these buffer strips, to try and minimize future damage.”

Bill is also excited about planting more fruit trees to sustain a healthy deer population, and he and his family have plans to install three more ponds and another 5 acres of prairie strips. Their investment in habitat over the years is paying off: Bill says the family has seen the return of bald eagles and trumpeter swans, along with their cygnets.

“The conservation on our farm started with not wanting to repeat past mistakes,” Bill says. “I want my kids to have this pristine land to grow up on and leave this legacy of care to them. We are also looking to the future, to ensure that the following generations can expect the same. I’m the fourth generation on this land and with any luck, there will be a fifth, sixth or even tenth.”