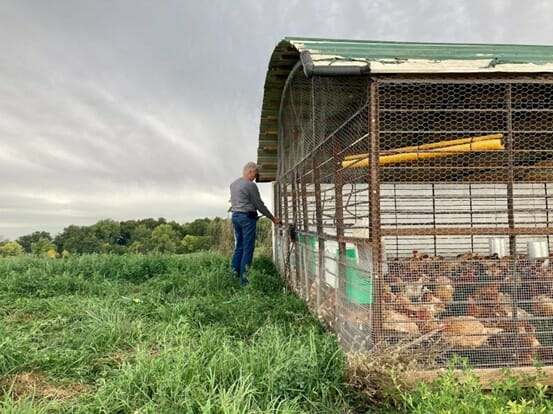 Natasha’s mother, Nancy Wilson, fills water from a permanent waterline in the pasture. Chores are now much faster and she no longer has to crouch to do.

Saving stuff (what some could consider junk) in case it “might be useful someday,” is a fairly common practice on farms. Finding a second life in old materials can make economic, environmental and sometimes emotional sense.

For Natasha Wilson of West Fork Farm near West Chester, Iowa, the portable chicken shed that her dad built this year checks all three boxes.

Originally, Natasha planned to buy a chicken shed kit, but the price made that unfeasible. “It was out of control. It was seven to eight thousand dollars for the kit, and then another eleven-hundred on top for shipping.

Plus, we still would have had to assemble it ourselves when it got here,” Natasha says. Instead her dad, Brian Wilson, designed and built a new shed using old materials. The total cost, including labor, came out to around $2,000, about a quarter of what they would have otherwise spent.

The only purchases for construction were two large metal runners, wooden planks for roof beams and some of the chicken wire. Most materials were already on the farm, saved and reused from old buildings. The walls were old hog confinement panels from one of their barns that’s no longer in use. Each wall is made of two panels stack on top of each other and welded together.

The welds run the length of the joint, which Brian says is more than it really needed, but he wanted it strong and overbuilt. In dragging it around he says proudly that “it’s teetered on top of ridges without flexing.” 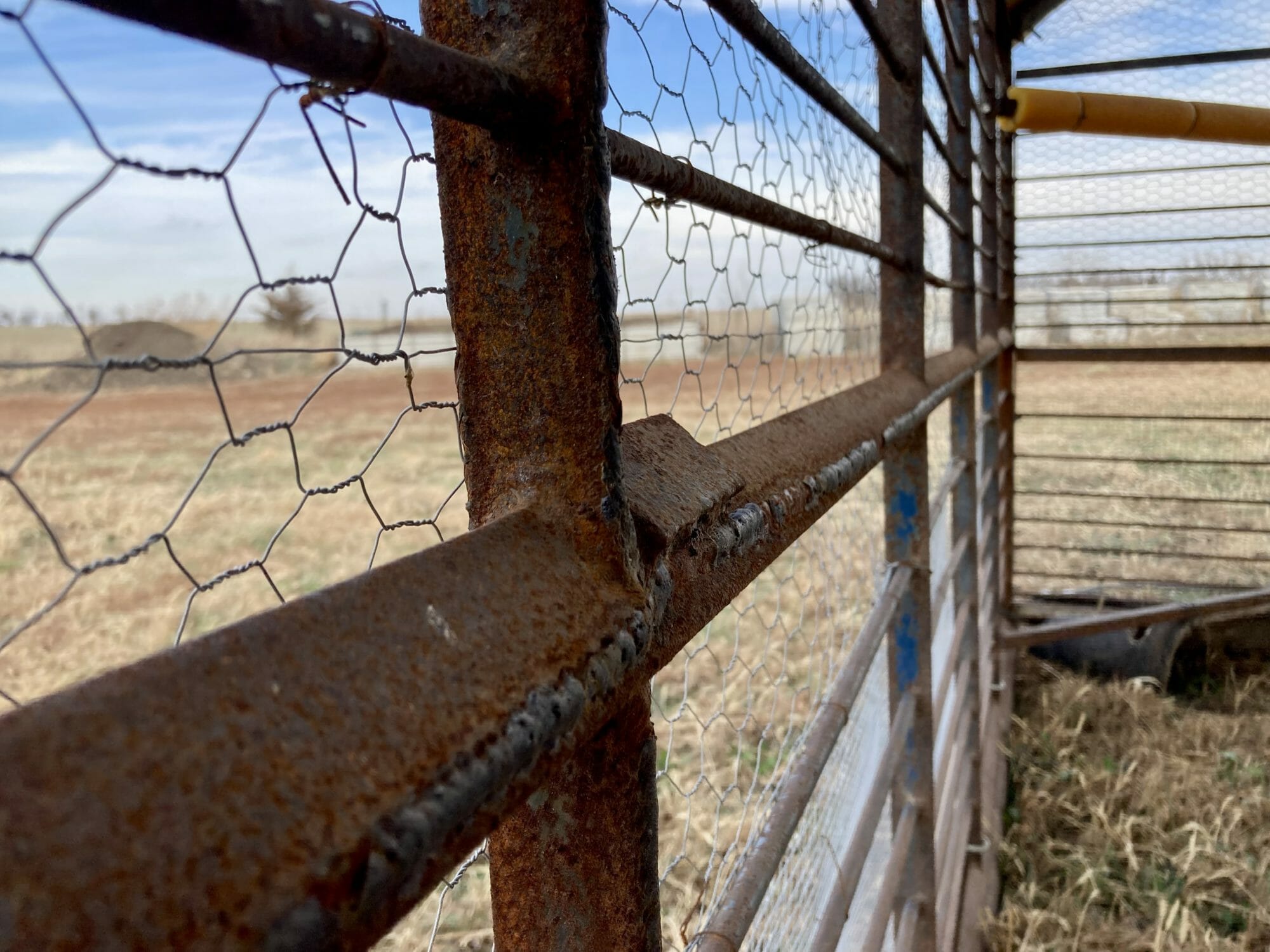 Brian says welding the hog panels along the entire joint is probably overkill, but it sure is strong.

The roof is made of metal roofing from when the hog barns were redone. The rubber mats are from an old, out of use piglet nursery. The arches of the roof were previously used in a hoop building that blew down. The bolts, metal cable, the shading tarp and a good portion of the chicken wire are just miscellaneous accumulations from over the years.

Brian is fairly happy with his design and wouldn’t change much if he had to do it again. The cross beam is a little low and is wrapped in foam padding after one too many head collisions, so he’d try to engineer that differently to be more out of the way. The only other major issue was the footprint. They run the shed in a lane between newly planted rows of trees in the pasture, so it was designed with that width in mind.

Natasha says it allows them to better use the pasture, however that width posed an unforeseen problem.  It was built in the workshop down the road, but when it came time to move it to the pasture Brian discovered that the chicken shed is wider than the road.  It took a bit of creative problem solving to drag it to the pasture, but it made it safe and sound. 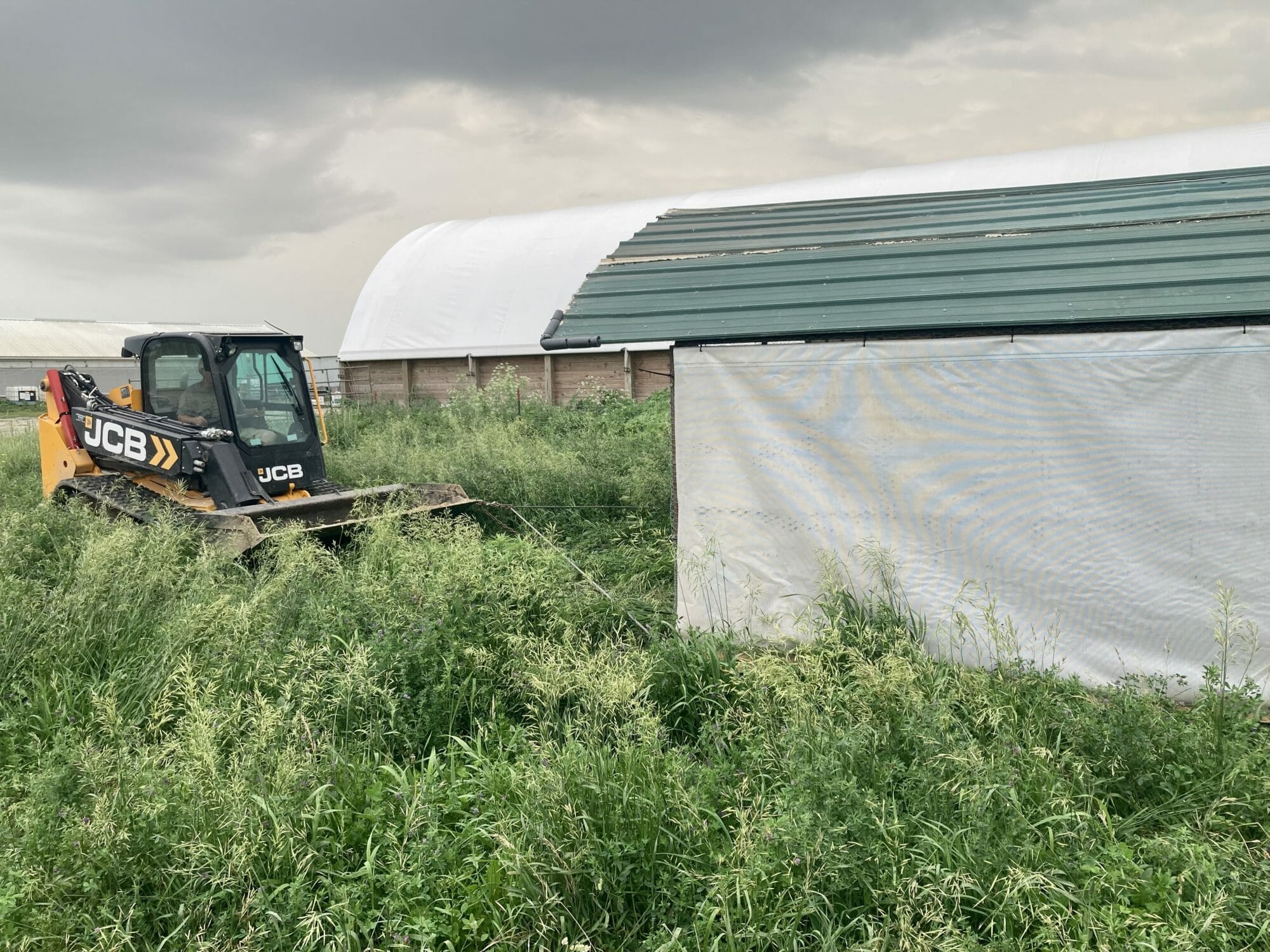 Once it was dragged to the pasture, moving with the skid loader takes only a minute a day.

The sturdier design also helps to prevent loss from predators. Previously, the small wooden a-frame sheds had to be on perfectly flat ground, otherwise they suffered from raccoons reaching underneath to grab and bite off chicken legs. Even with electronet fencing and traps they had troubles. “We had a massacre one night of ten dead chickens, each with a leg missing.”

The new shed is heavy enough that slight lumps in the terrain don’t impact it, the weight levels them out. The front and rear have heavy rubber mats under the cross bars that connect the two runners, preventing any opportunistic paws from reaching under. This year Natasha ran three batches of 300 chickens with zero predation loss. 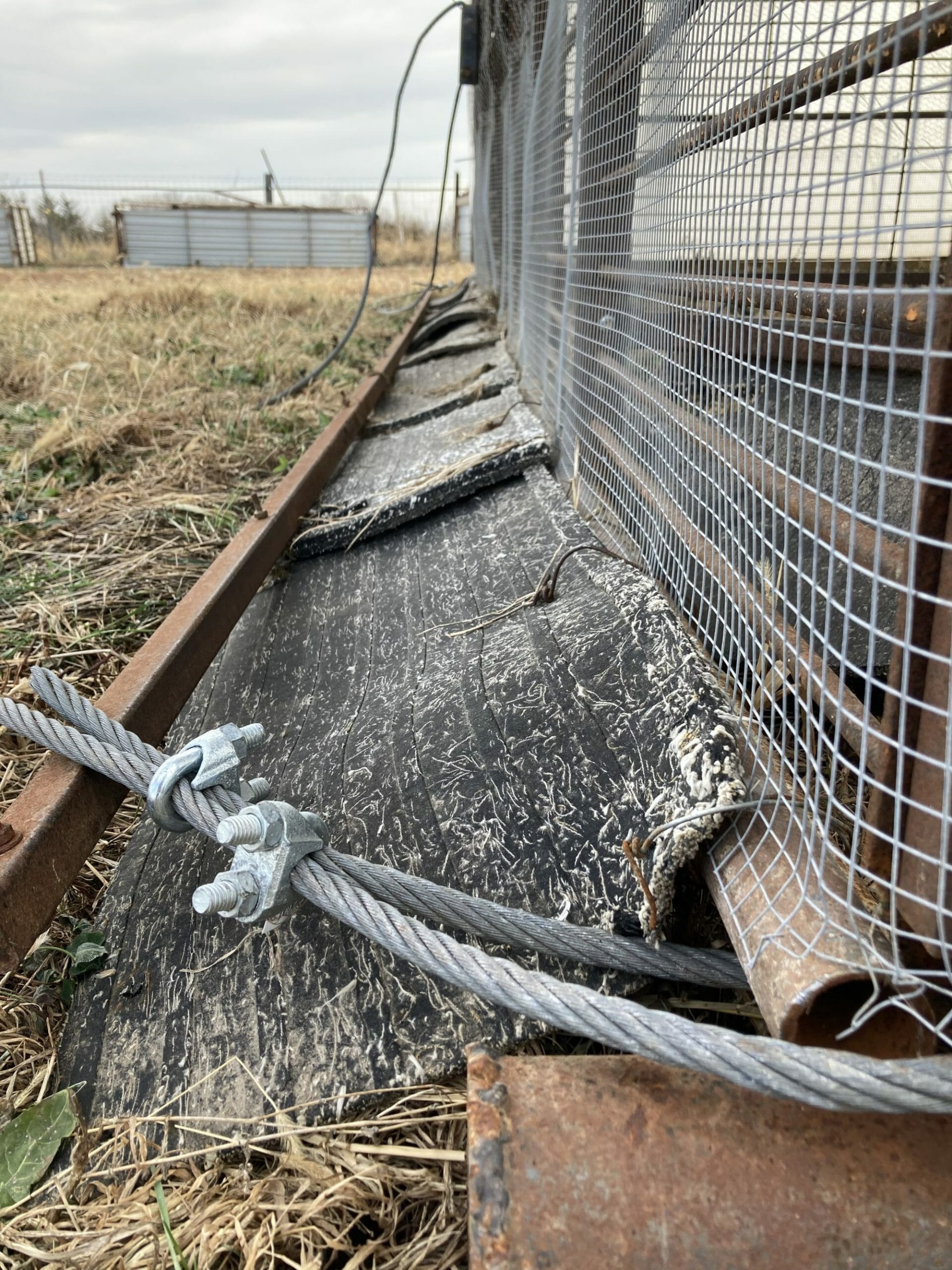 The towing cable was just lying around the farm, and the rubber mats came from the old piglet nursery.

The chores are easier now as well. Before Natasha and her parents were dragging five smaller sheds by hand. Through the tall grass it could be a struggle. Now they simply hook the large shed up to a skid steer and drag it forward to the next grazing spot. With this larger and easier shed they’re able to care for twice as many chickens in half the time.

Because the shed is taller, an adult can stand upright and walk around easily (besides ducking under that pesky crossbeam) Natasha and her parents no longer have to bend over to fill feed and water, or scramble on the ground to gather chickens. Instead of carrying buckets of water to multiple sheds, water buckets hang on one wall and can be filled by a hose from a waterline in the pasture.

The time saved and easier work “has greatly improved our quality of life.” 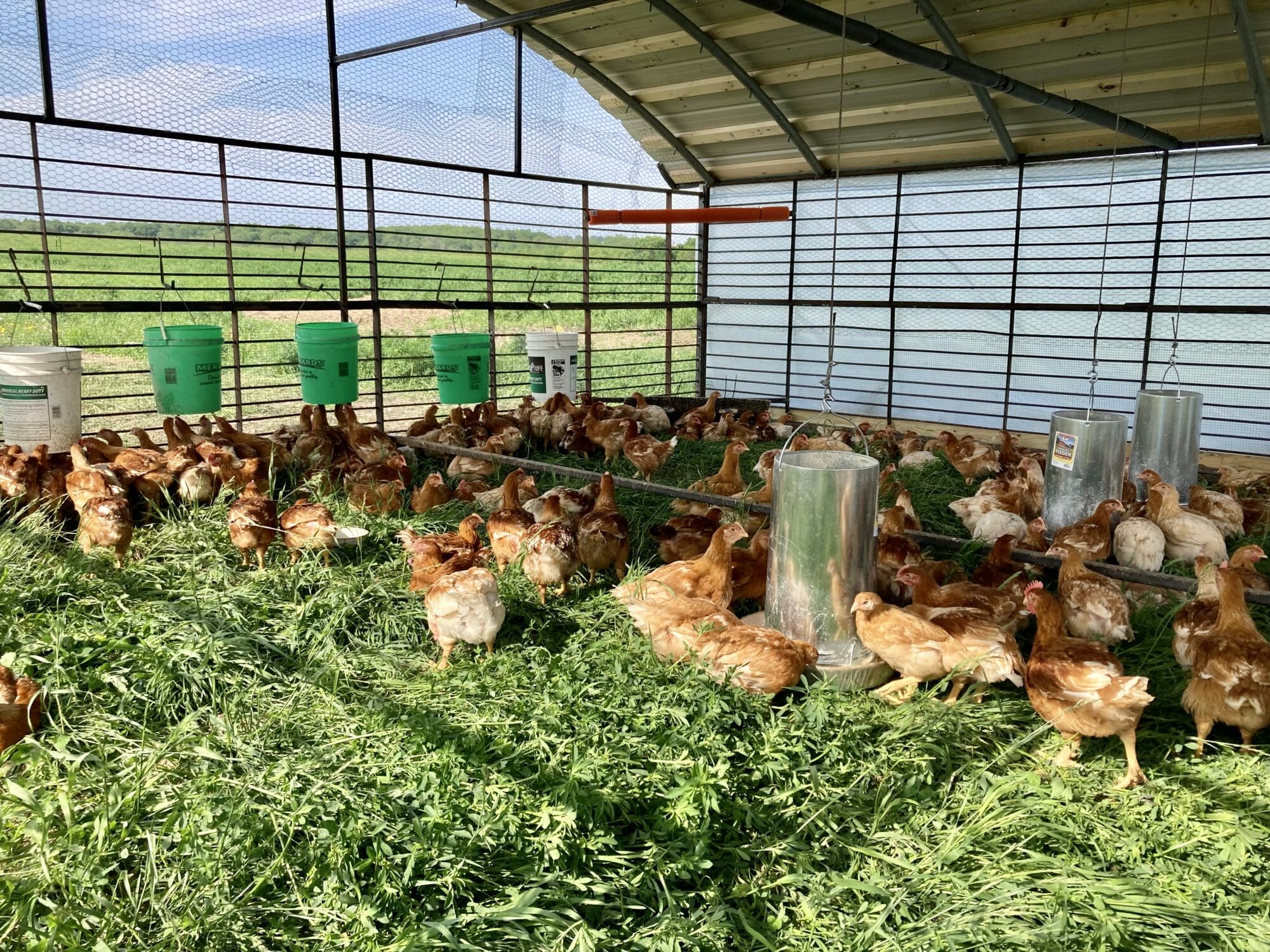 Built using salvaged materials from around the farm, the Wilsons are able to raise twice as many pastured chickens as before. The walls, roof, and rubber ground guard come from an old hog barn. The arches are from a hoop building.

Lastly, it’s worth acknowledging the more important, yet intangible, significance that this chicken shed holds. It’s made from the transformation of confinement panels into a vehicle to raise pastured chicken, mirroring the journey Natasha and her parents are taking to transition their farm to a regenerative pasture-based system. It’s also a physical manifestation of the skill, work and love of Brian. A utilitarian gift to his daughter that she can reflect on every time she works with the chickens.

If you have a clever contraption you’ve made on the farm reach out to Amos Johnson at amos.johnson@practicalfarmers.org or call 515-232-5661. You could be featured in an upcoming blog!