The grass is brown and dry – cushioned firecrackers punctuating footfalls. It is the precipice of fall, but the quiet cacophony is not the crisp crackle of autumn; rather, it’s the dry crunch of another summer of drought.

Rain has been scarce in the Loess Hills of western Iowa, and Stennie Nelson is walking her pasture near Turin, Iowa. “Last year I’d have grazed this twice by now. This year, I’m hoping I can come back through soon,” she says, sweeping her arm to indicate the steep hillside as she squints into the sun. Her sheep meander up to the fence line to greet her, languid from their rest in the shade. 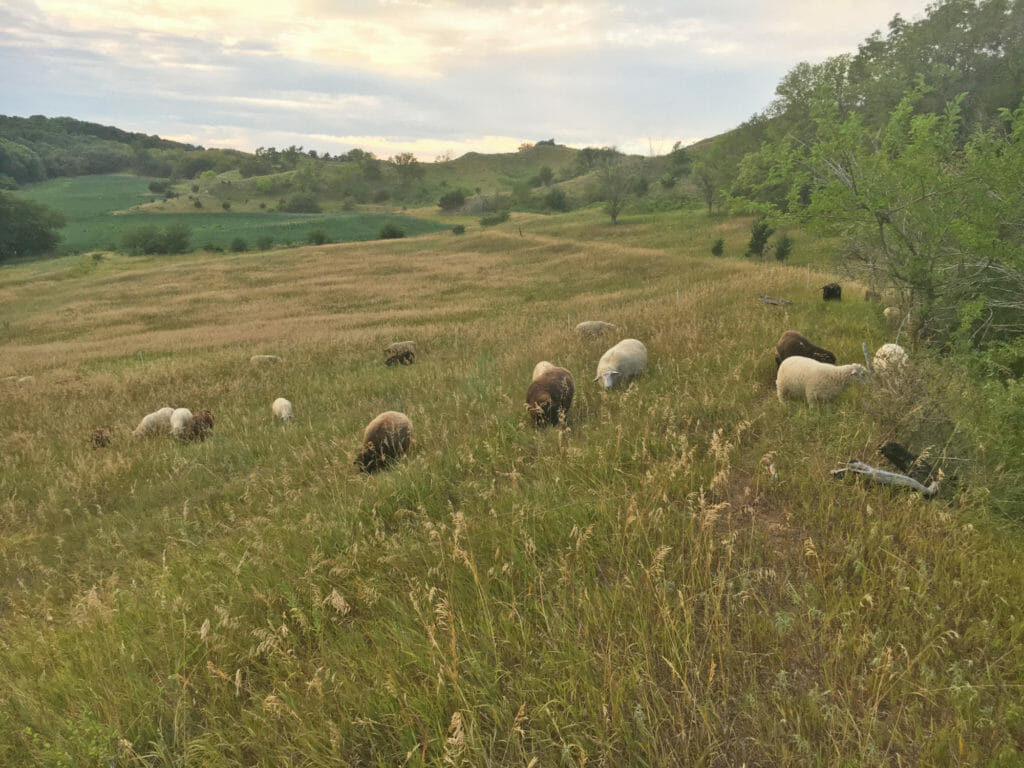 Stennie Nelson’s sheep graze in one of her pastures near Turin, Iowa, in the Loess Hills. A second year of drought has forced Stennie, who practices rotational grazing, to supplement with hay bales. 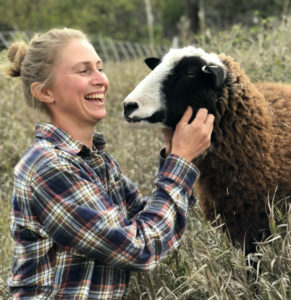 They’ve been in this paddock for a week and are ready for greener pastures, but right now there aren’t any. Since moving to this farm two years ago, Stennie has been practicing rotational grazing, but this year the drought has forced her to supplement with hay bales on an old row crop and hay field. Compared to the remnant prairie surrounding it, this patch of dirt is exhausted, and in the drought it just can’t recover.

“I’m trying to keep this weather in perspective,” she says. “Like, how bad is it?” Stennie reaches down to scratch under the chin of her favorite ram, giving him reassurances she doesn’t have for herself. “But hearing from my neighbors,” she continues, “this is not normal. Who knows what’s normal anymore?”

Russ Wischover has faced a similar problem. Standing in the midst of verdant pasture, he explains that when he bought his farm in Bedford, Iowa, a large portion of it had been in the federal Conservation Reserve Program for years. “It had been rested to death,” he says. “There was bare ground.” He couldn’t find any useful advice about how to restore the land until he read about rotational grazing. 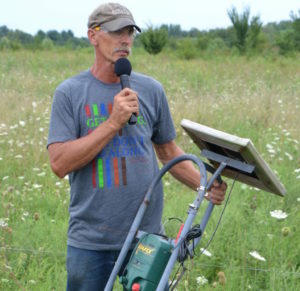 He started moving his cows back and forth across the land, grazing hard and then letting it rest. Results weren’t quick in coming. “After about three years, I was just to the point of saying ‘this is all bullshit.’” Russ was ready to concede failure when he stumbled upon a lone clump of switchgrass – the first warm-season perennial he’d seen on the former CRP ground. “I was like ‘Hallelujah! Something’s working!’”

After seeing that initial clump, more started appearing. He reaches out, excitedly naming all the grass species within arm’s reach. “I started seeing big bluestem, then Indian grass. Now I’ve got eastern gamagrass all of a sudden, 10 years in.”

Rotational grazing is not a new concept. In fact, it’s how grasslands coevolved to thrive with the once-vast migrating herds of bison, antelope and elk that roamed the Plains for thousands of years. Pushed by the seasons, and by management from various Native American nations, the herds would graze an area hard and then move on, not returning for another year. 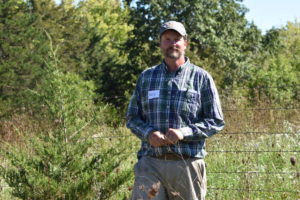 Andy Welch, a farmer from Sheridan, Missouri, says the goal of managed rotational grazing is to replicate that system. “We ought to look to mimic Mother Nature on how to solve any of our problems,” he says. In contrast with continuously grazed pastures, which account for 80% of Midwest pastures, farmers practicing rotational grazing play an active role in determining where their livestock eat at any given time. “When I think about rotational grazing, it’s not just what they have access to,” Stennie says, “but what they don’t have access to. It’s about keeping them out of places so they can’t take that second bite on a plant.”

Russ says that’s the key. “The best thing you can do is give the plants time to recover.” Letting plants rest speeds their regrowth while improving forage quality and quantity. Rotational grazing can also increase the amount of forage harvested by as much as 2 tons of dry matter per acre, according to the Natural Resources Conservation Service. Because plants can grow taller in these systems, they are able to harvest enough sunlight to keep growing while storing surplus energy for later. That typically starts in earnest when plants reach 6 to 8 inches tall. After grazing, the plants use this stored energy to regrow more quickly and repeat the process.

Because livestock have a taste for fresh, new leaves, plants can’t store surplus energy in continuously grazed pastures. As soon as they start regrowing, the animal returns for a tasty second bite, forcing the plant to use up its reserves. This stress limits the speed at which a plant can regrow, or can weaken the plant until it dies. Few species of palatable plants thrive in these conditions. Over time, low-producing, unpalatable and undesirable plants come to dominate.

Letting pastures rest, and especially changing the seasonal timing and paddock shape for grazing, also encourages plant diversity. As Russ saw on his old CRP ground, rotationally grazing his cattle helped spread manure uniformly and stimulated the dormant warm-season prairie seed bank. “We don’t need to buy seed,” Andy says. “The soil is full of seed. We just have to manage it to give it a chance to express itself.”

The same process helps eliminate unwanted pasture plants. Andy says he manages brush on some of his land by intentionally overgrazing it, rotating goats through to browse the scrub down and then coming back again just as it’s all resprouting. Stennie works with the Iowa Department of Natural Resources to do similar work on the public land surrounding her farm. Her sheep graze back the brush and brome that invade and compete with the native grasses and forbs.

“I worked in conservation, and that’s been a big mindset of mine,” she says. “Can I use sheep as a grazing tool for land like this to help manage prairie? Can grazing and conservation work together?”

“I started seeing big bluestem, then Indian grass. Now I’ve got eastern gamagrass all of a sudden, 10 years in.”

The NRCS and the Audubon Society both say yes. They highlight the positive impact rotational grazing has on plant life as a way to revive grassland bird populations. As the plant diversity in an ecosystem returns, diverse creatures come back as well. Walking through the tall grasses of the DNR prairie adjacent to her land, Stennie says she hopes to revive similar biodiversity on her land. “It goes beyond just wildlife, but to building back the diversity of plants and all the insects.”

Even though this grazing season is not going to plan, the diversity Stennie is fostering through rotational grazing will help her pastures become more resilient to future droughts. As the climate warms, weather patterns change – but a resilient system can help plants, animals and people to adapt. Rotational grazing is difficult work – hauling fencing over rough terrain, puzzling through water supply problems, the learning curve of trying to mimic Mother Nature. But for the farmers who are doing it, the intangible rewards are as meaningful as the practical benefits.

“You go out and you move livestock, and you see that they have plenty to eat and they’re happy to see you,” Andy says, lowering his voice reverently. “You hear the sound of grazing. I just really enjoy that.”

“The reward is that eastern gamagrass,” Russ says. “Ten years and it just showed up because evidently I’m doing something right.”

Perched on top of a hill, Stennie stands flanked by stages of restoration. On one side lies bare ground where the DNR recently removed stands of invasive cedar trees. The other is covered in prairie her sheep grazed earlier in the season. It sprang up from the seedbank when cedars were removed years before. Stennie looks down at the old field in front of her. The sheep may be eating hay now, but they’re still doing restoration work, bringing back fertility with their manure.

It was a hike to get here, but Stennie persisted, pointing out wildflowers as she climbed, excited to see new ones blooming. “That’s part of what I love about rotational grazing,” she says. “I really do get to walk every inch of the land and get to know the pockets of it. I mean, to have remnant prairie in my backyard? This is why I came back to Iowa.”