Securing land as a beginning farmer is more than a simple transaction; it’s a process of working through what’s possible and what isn’t, financially and logistically, and making a host of compromises and decisions.

After finding prospective land, for instance, the farmer must ask: Is it near the right town? Does it have the right infrastructure? If not, is it possible or feasible to install it? Are there adequate living quarters? If the land will be leased, the land seeker and landowner must find out if they share the same goals and expectations. The lease terms must then be negotiated, along with questions about tenure.

Helping guide beginning farmers through these complex contours is where Practical Farmers of Iowa’s farmland access navigators come in. These individuals are part of the Farmland Access Hub, a tri-state network connecting Renewing the Countryside in Minnesota, Marbleseed (formerly known as MOSES) in Wisconsin and PFI, and their job is to support land seekers and connect them to resources. The hub also provides lease and contract reviews from a lawyer.

But finding land is only part of the process. Amber Mohr, one of PFI’s four farmland access navigators who runs Forktail Farm in Avoca, Iowa, says the navigators also help farmers consider scenarios they might have overlooked. “Most of the time I work with leases rather than purchases,” Amber says. “The beginning farmer is so excited, they will take anything and may not get what they need.”

This eagerness can lead them to take on more debt than they should, she says, or accept subpar living conditions. Some landowners also struggle to prioritize a beginning farmer’s needs. “They want someone to keep their farm and vison going, but they’re not always willing to provide what’s needed to sustain that – the wage or the shelter,” Amber says. “There’s a vulnerability there.”

In her consultations with beginning farmers, Amber makes a point of describing the ways leases can be written to ensure beginning farmer investments are protected – such as by incorporating longer lease terms for livestock or a fee schedule for landowners to buy back infrastructure if a lease ends.

Carlos Williams is a farmer and PFI member who worked with Amber to create an LLC and a lease for his business, Williams Topsoil Poultry, based at Sundog Farm near Solon, Iowa. “I love Carlos’ story,” Amber says. “It’s an example of a landowner and a beginning farmer working together to benefit each other.” At the time Carlos decided to form the business, he had been working at Sundog Farm for many years. Today, Carmen Black owns and operates the farm, but Carlos’ connection stretches back to when it was ZJ Farm and he and his mother would visit Susan Jutz, the farm’s previous owner. 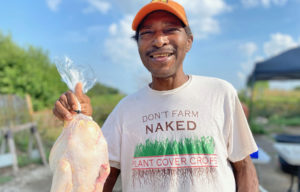 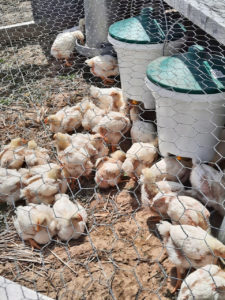 Carlos, who has kidney failure and requires dialysis, worked at the farm when time and his health allowed and says the farm was vital to helping him find inspiration and focus. “I couldn’t work anymore,” he says. “I wasn’t strong enough, but little bit by little bit, things started to match up. My whole attitude changed. I started feeling better – just the fresh air, time to think, wide open spaces. I wasn’t so stressed. I wasn’t thinking about death anymore, I was thinking about growing things.”

In 2020, mindful of his doctor’s advice to eat more protein – and curious about how chickens could be used to improve the soil – Carlos decided to experiment with raising some chickens at Sundog Farm, selling them to Sundog Farm CSA customers in 2021 and 2022. As Carlos worked to establish his business, he and Carmen met with Amber several times to work through details of the lease and his LLC.

Carmen had used the Iowa land access navigators in previous years to create a lease for neighboring pastures and recommended the program to Carlos. “I recognized how helpful it is to talk through things with them and have someone ask questions you haven’t thought about,” Carmen says.

Though the program’s legal document review service, Carlos was also able get expert advice on how to set up his lease. Because the chickens would be moved throughout the farm to help improve the soil, the lease included several important components. First, it stipulated that Carlos would pay rent for days of pasture use rather than a specific number of acres rented. Second, because the enterprise was designed to improve the soil, the lease included payments to Carlos for the service.

Finally, because most small to midsize chicken operations are minimally profitable, Carlos worked with Amber to structure the business so he reinvests profits to grow and sustain it, and to invest in capital like a low-lying chicken tractor and electric fencing. “If I can feed my community and my family and break even, that makes me feel really good,” Carlos says. “People who shop with me know that they’re buying quality birds, sharing what I do for my health and theirs.” This is his gift to his family and customers.

The ability to raise his own food also has added meaning for Carlos. Because land ownership was systematically denied to Black people for generations, those who want to farm today face additional hurdles to accessing land. With the weight of that history, watching his granddaughter connect with the land he’s farming at Sundog Farm has special importance. “She’s going to become a farmer,” he says with a laugh. “I can’t stop her.” 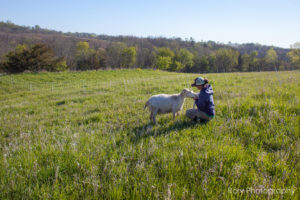 Hannah Breckbill, of Humble Hands Harvest in Decorah, Iowa, is another PFI farmland access navigator. She says many beginning farmers she and other navigators work with are specialty crop farmers who usually don’t need much land. “That’s an interesting conundrum on the Iowa landscape given the way things are parceled off,” she says. “When people are looking for ten to hundreds of acres, the capital needed is overwhelming. My take is always, ‘What’s the creative way around this?’ ”

Hannah focuses on the community network and the potential for tapping into non-traditional access to capital. “I get people thinking, ‘Who are my networks? What are my accesses to resources? Who could come into this with me some way?’ ”

Creative networking with other PFI members led beginning farmer Bailey Lutz to connect with Deborah Jacobi of Middle Bear Bluffs Farm northeast of Decorah. Bailey, who uses the pronoun they, grew up in the suburban landscape of Brooklyn Park, Minnesota, and says they didn’t feel a strong connection to place growing up.

Coming to Iowa’s Driftless Region in 2018 changed that. “I was mesmerized,” Bailey says. “This is where I’m meant to be.” Since then, Bailey has lived and farmed in several places looking for the right home for their goat grazing business, Hollyhock Land & Livestock. Deborah’s farm, with its mix of woods, pasture and land in the Conservation Reserve Program, looks to be that perfect place.

Deborah’s parents purchased the farm as part of a partnership in 1979 and formed its current LLC structure 20 years later. While Deborah works for a Minnesota-based non-profit and does not farm, she describes how its sense of peace grounded and anchored her. Deborah and Bailey are now in the beginning stages of writing a lease that will be mutually beneficial.

Ultimately, as Deborah says, “We are interested and open to discovering the possibilities and what a long-term vision for this farm could be.”

The PFI Network of Navigators

Sometimes, it’s just a phone call to help aspiring farmers get started. Other navigators have regular check-ins with a beginning farmer about goals and steps toward accessing land.