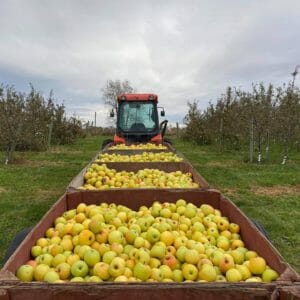 Running an apple orchard and pressing cider is a year-round job, but the peak of harvest season tests the mettle of even the most experienced growers. During this “Live From the Farm” episode, we’ll meet Paul in his main production orchard. He’ll show how the farm’s harvest is coming along and explain some of his favorite harvest tools and processes. He’ll also highlight some favorite cider apple varieties in his orchard, and we’ll tour through the cider pressing and canning facility. 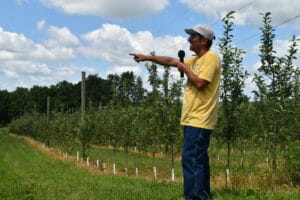 Paul Rasch and Sara Goering took ownership of Wilson’s Orchard north of Iowa City, Iowa, in 2009. Traditionally a U-pick orchard with over 100 apple varieties to choose from, the orchard has diversified its business enterprises to meet customer demand in the Iowa City area. Paul began crafting hard cider in 2015, which is sold at the on-site Cidery (Rapid Creek Cidery) and at grocery stores across the state.

Other orchard enterprises include the Smokehouse, Bakery and Farm Market, which offers products from Wilson’s Orchard and other nearby farms. Paul and his team also grow strawberries, pumpkins and flowers and they manage a flock of sheep, which frequently enjoy apple pumice from the cider press.