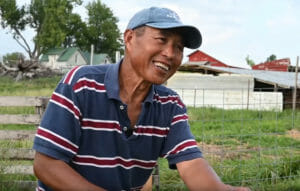 RSVPs appreciated for dinner following the event by Sept. 14.

Join Air on a tour of his very diverse farm. Originally from Laos, Air settled in Iowa and purchased a farm in Warren County in 2010. Over the last decade, he’s built his operation from scratch, raising diversified livestock and horticulture crops on 11 acres. A self-described “Laotian cowboy,” Air will showcase his Muscovy ducks, goats, veggie garden and livestock guardian dogs. His products are sold to immigrant communities around Des Moines. Following the farm tour, a meal will be shared and music will be played on his newly constructed stage.

Phrakhounmany “Air” Philavanh farms on 11 acres near Milo, Iowa, raising a diversity of livestock and crops. Air immigrated to Iowa from Laos in 1984 and started farming in 2010. He loves to share what he’s learned with other immigrant communities in Iowa, his neighbors and his family and friends in Laos. His goal is to re-create a simple Laotian farm, applying lessons from his grandfather, to showcase history and farmer ingenuity.

RSVP for this field day