Small grains (oats, wheat, barley and rye) have historically been fed across all types of pig production systems and are higher in fiber than corn. Small grains take longer to digest and have a lower energy concentration than corn. This results in pigs needing to eat more and take longer to finish than when fed a corn-based diet.[1,2] Previously, farmer-cooperator Tom Frantzen compared finishing pigs on a corn-based and a small-grain-based diet to quantify the difference in finishing time, feed consumption, gain and carcass quality.[3] In the present demonstration study, Frantzen adjusted and fed to pigs eight different rations that included hybrid rye. Quantities of soybean oil were adjusted to achieve the same digestible energy (DE) as his typical corn and soybean ration. 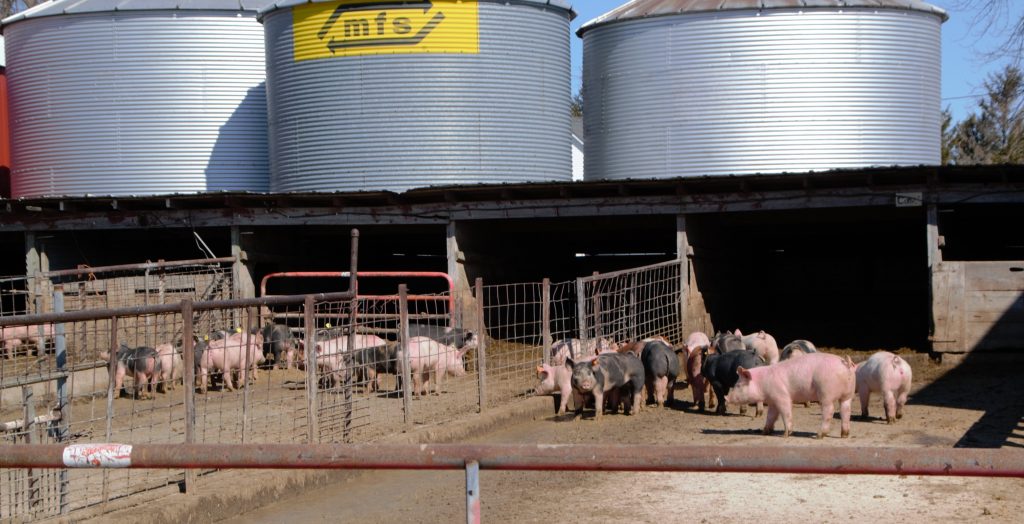 At three months of age, pigs were ear tagged and weighed then randomly assigned to either the corn and soybean or the hybrid rye ration pens.

Farmers in the Midwest commonly know rye as a cover crop. A small amount is grown as feed grain, and an even lesser amount is grown to feed pigs. Rye is a fall-seeded and summer-harvested crop; paired with low-input management, it helps to spread the workload across the year when incorporated into corn and soybean rotations. Rye enhances water penetration and retention, reduces soil erosion and reduces weed biomass by 60 to 95%.[4] A winter cereal crop like rye also helps to break herbicide-resistant weed cycles, like ragweed and foxtail, due to direct competition during early spring emergence.[5]

KWS, a German seed company, has spent 10 years developing varieties of hybrid rye. Nine different hybrid rye varieties exist, three of which are sold in the U.S.: Bono, Brasetto and Progas. Bono and Brasetto are grain-type hybrids, while Progas is a forage-type hybrid. Compared to traditional, open-pollinated varieties of rye, hybrid rye boasts a more extensive root system and requires 20% less water and 20% less fertilizer, according to Claus Nymand, KWS product manager. Frantzen has been growing KWS’s Brasetto hybrid rye since 2016 and has observed it to limit ragweed infestation in his organic crop fields. “Hybrid rye is a multipurpose crop that we now have implemented in our crop rotations. It suppresses ragweed plus can be used both as livestock feed and straw as bedding. Hybrid rye is an exciting crop for our farm,” shares Tom.

Objective: Identify a ration inclusive of hybrid rye to meet the DE content of a corn and soybean diet to feed organic finishing pigs. 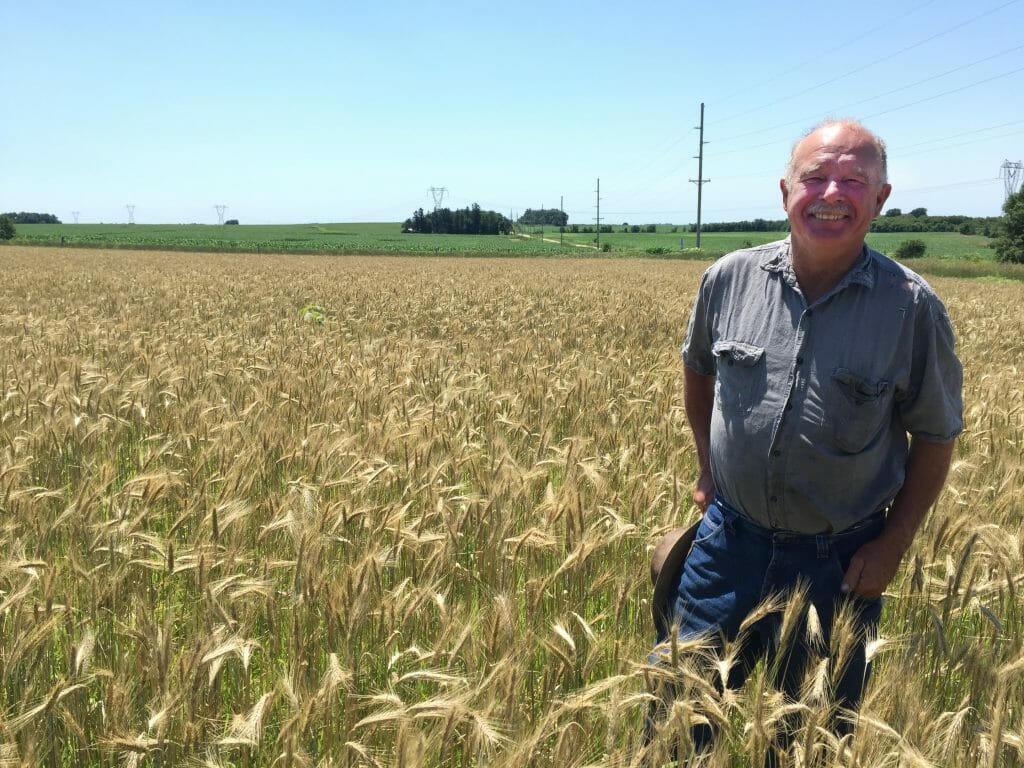 Tom Frantzen in a field of his hybrid rye harvested in July 2018 to feed pigs in his feeding trial.

Table 1 illustrates the different ration adjustments and their nutritional analysis. All eight ration adjustments fluctuated with amounts of soybean oil to meet the DE target of 1,683 cal/lb. To balance for the low energy content of hybrid rye, Frantzen adjusted the soybean oil content in the eight batches in an attempt to match the DE content of his typical corn and soybean ration. Frantzen’s typical corn and soybean ration does not include soybean oil, because corn provides a sufficient amount of energy. When including rye, an energy subsitute (i.e. soybean oil) is needed. “Sending samples to the lab each week allowed me to see how my adjustments were doing. I wanted to see if I adjusted by five or ten pounds of soybean oil, how the energy was affected until I was confident that I was meeting the target,” Tom said. 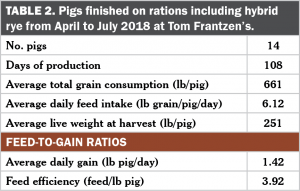 Table 2 shows feed efficiency and average daily gain of pigs fed the ration that included rye. Both rye and corn serve as energy feedstuffs in pig rations, but hybrid rye has lower energy content. Nutrition and extension guides suggest cereal rye ration inclusion rates for grow-finish pigs reach a maximum of 25% (below 125 lb live weight) and 35% (above 125 lb live weight).[1,6] Frantzen challenged suggested inclusion rates by feeding pigs a ration of 37% hybrid rye, effectively replacing half the corn in the diet. “If rye were equal to corn in every way, we would have expected the same gain, but rye does not have the same energy as corn does causing our feed efficiency and gain to be lower. So we adjusted with the soybean oil in order to meet the same energy as a corn and soybean diet,” Tom said. Figure 1 illustrates the average weight of the pigs fed rations including hybrid rye from April until July. Overall, Frantzen was satisfied in the weights and gains of the pigs fed rations including rye in this demonstration. 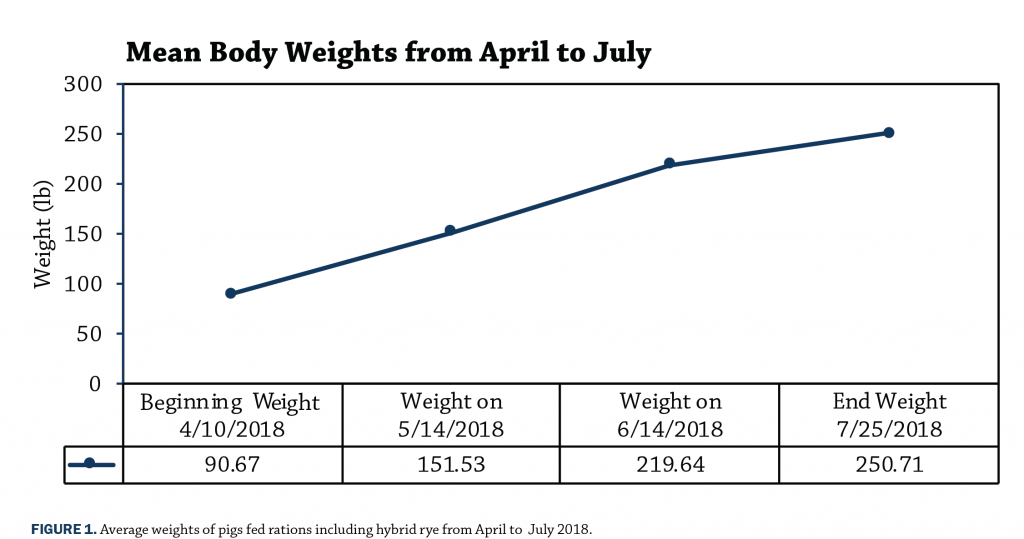 After adjusting rations and testing nutritional composition through the year, Frantzen settled on the rye ration shown in comparison to his standard corn and soybean ration in Table 3. The rye ration is being used in Frantzen’s next research trial comparing finishing time, feed consumption, gain and carcass quality of pigs fed an organic corn and soybean diet and a hybrid rye diet. The new trial began October 2018 and is projected to end in February 2020. 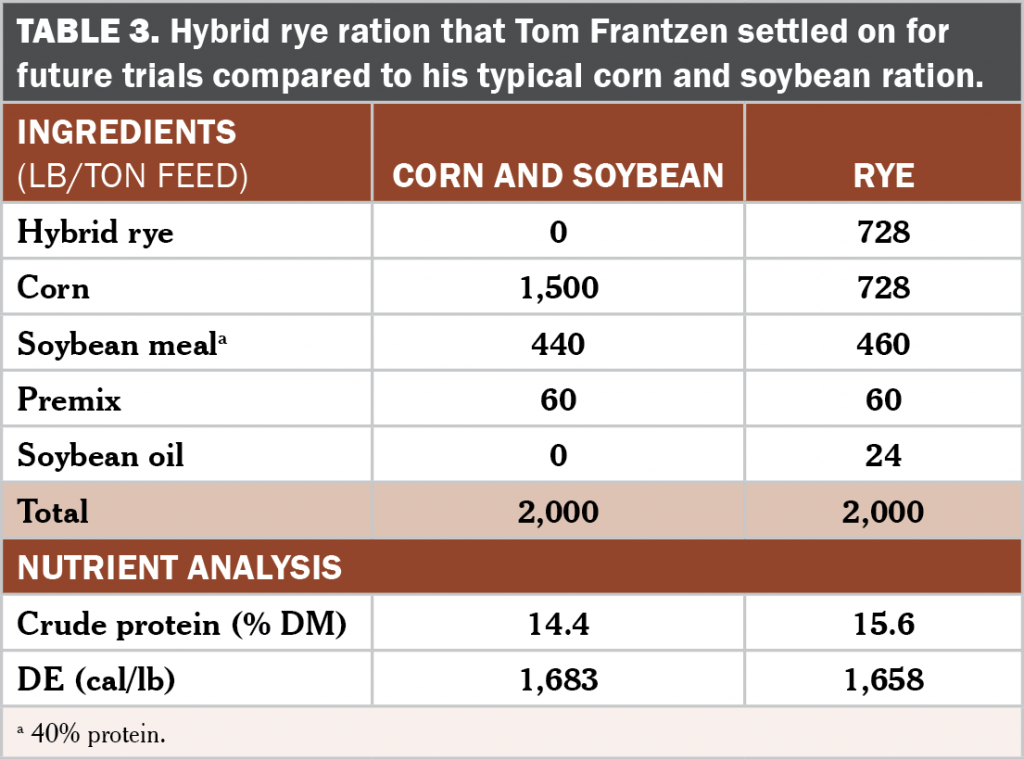