Cover crops in annual crop ground can be grazed with economic benefit to the grazier and crop farmer, as shown in research from Practical Farmers’ livestock and field crops programs.[1–3] Vegetable farmers commonly raise livestock to diversify their income and the ecology of their farm, and to make better use of vegetable scraps as feed and manure as fertilizer.

Carmen Black and Mark Quee both use cover crops in their rotations; green fallow seasons with cover crops provide opportunities for grazing on vegetable fields. But they are interested in utilizing their vegetable production beds in non-fallow years for animal forage, too. Fall cash crops are seeded in July, which leaves time in the spring to establish, and graze, a cover crop. Both Black and Quee raise sheep on their diversified vegetable farms. They were curious if grazing a cover crop prior to a fall crop, rather than simply terminating the cover crop by mowing and tillage, would have an impact on the yield of the next crop. 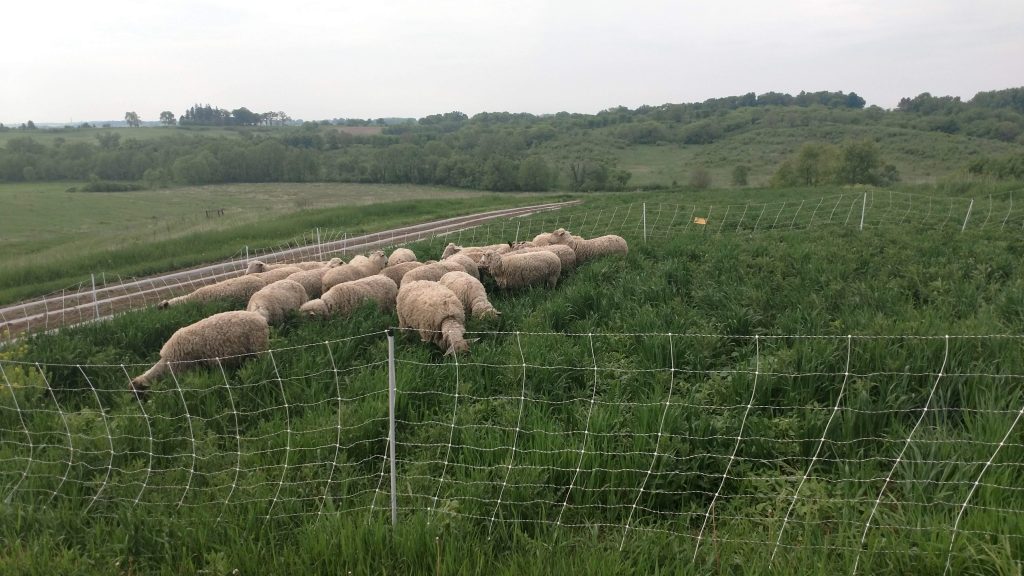 In a 2017 experiment, Black and Quee did not observe differences in brassica yield from grazed and un-grazed plots.[4] Both farmers, however, felt they learned a lot about the timing and process of grazing sheep on spring cover crops, and were interested in doing the trial again in 2018, with the addition of soil fertility testing.

Said Black, “I’m interested in finding ways to incorporate my sheep into my vegetable operation more holistically, but also in compliance with food safety regulations. This trial will allow me to see if there’s any measurable difference right away.”

This project was conducted at two Iowa farms: Carmen Black (Sundog Farm in Solon) and Mark Quee (Scattergood Friends School in West Branch). Farmers set up experimental plots in a randomized, replicated pattern, as shown in Figure 1. During the spring, a cover crop of oats and peas was seeded to all plots. Farmers used moveable electric fence to exclude the sheep from control (un-grazed) plots, while the treatment plots were grazed. Quee grazed sheep in the plots on June 8; Black grazed sheep in her plots on June 5. Cover crop biomass samples were taken from all plots just prior to the onset of grazing by clipping aboveground foliage at ground-level (three 1-ft2 quadrats per plot), air-dried and weighed at the Practical Farmers of Iowa office. Biomass results are reported on a dry matter (DM) basis. Cover crop and grazing information for each farm is available in Table 1.

After the oats and peas were terminated by grazing, mowing and tilling (in grazed plots), or by mowing and tilling (in control plots), fall brassica crops were seeded along the length of the plots. Quee collected yield data on fall broccoli; Black collected data on Brussels sprouts. Long season brassica crops were used to ensure livestock would have been off the fields 90 days prior to crop harvest, as required by the Food Safety Modernization Act. 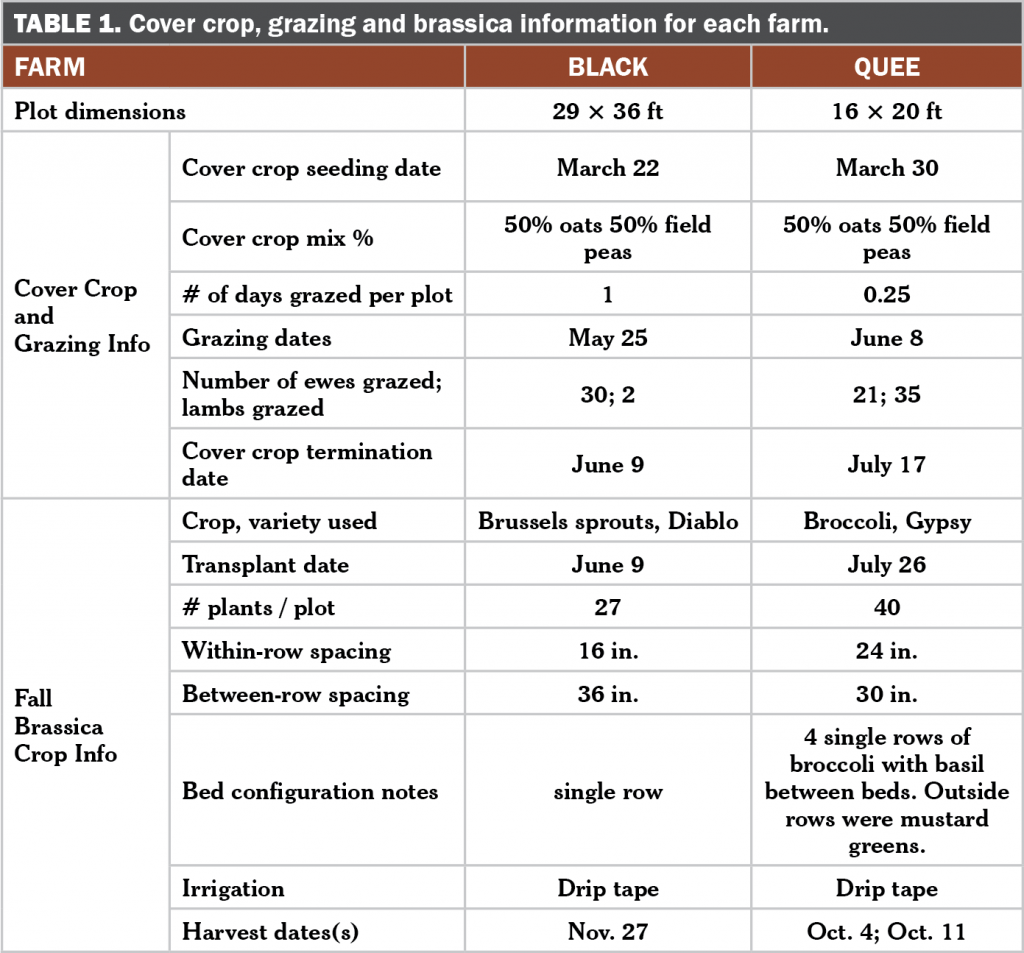 Quee measured broccoli (cv. Gypsy) yield; Black measured Brussels sprouts (cv. Diablo) yield. Planting, management and harvest practices were consistent across treated (grazed) and control (un-grazed) plots, and are available in Table 1. For broccoli, Quee counted, weighed and measured the width of heads in each plot. For Brussels sprouts, Black harvested entire stalks, then counted and measured sprouts, and graded sprouts based on USDA criteria for color and firmness, by plot.[5]

Soil samples were collected to a depth of 6 in. to measure soil fertility when cover crop seed was planted, and again in June when brassicas were planted (following grazing). Quee took an additional soil sample in November.

Black grazed her sheep through the treatment plots on June 5. Because it was a hot and sunny week and there was no shade available in the plots, the sheep only grazed the plots for one day. During this short time, the sheep did graze down the cover crop biomass, as shown in Table 2.

Following termination of the cover crop on June 9, Black immediately transplanted Brussels sprouts, which were harvested on Nov. 27. Average values for Brussels sprout yield, size and quality were not different between grazed and un-grazed plots, as shown in Table 3.

Soil fertility tests showed statistically higher levels of nitrate-N during March, prior to grazing, in what would become the grazed plots (26.0 ppm compared to 21.3 ppm in un-grazed plots). Essentially, the baseline levels prior to the trial showed more nitrate-N in the plots that would become the grazed plots. No other fertility comparisons were statistically different in June or March. Soil fertility samples were not significantly correlated with final brassica yield, as levels of both nitrate-N and P were plentiful.

Cover crop biomass was statistically equivalent between the grazed and control plots, both before and after grazing at Quee’s. With more than a month between grazing and cover crop termination, the un-grazed plots did not put on much additional biomass (0.06 ton DM/ac), while the grazed plots had less biomass, due to the grazing (Table 5). Quee noted that germination of the oats in particular was spotty, and that the cover crops were weedier than he would prefer. These irregularities made the forage stand less uniform, which led to more variable biomass samples.

Un-grazed plots had slightly higher broccoli yield (0.14 lb/ft2) than grazed plots (0.11 lb/ft2) (Table 6). Other measures of yield components were not statistically different, though the difference in yield seemed to be driven by larger broccoli heads in un-grazed plots. Quee noted that he harvested some heads early to get them out of the field before a cold and rainy weather forecast. Un-grazed plots also had statistically higher nitrate-N levels in June, while the cover crop was growing (Table 7). Though broccoli was not transplanted until July 26, soil fertility levels measured in June before incorporating the cover crop indicated that the un-grazed plots had more nitrogen available; possibly resulting from previous crop and fertility management in the field. 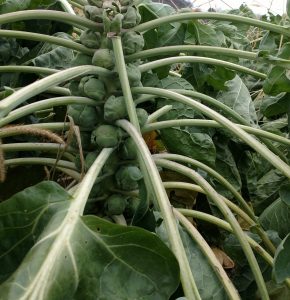 Brussels sprouts on Nov. 8 at Black’s 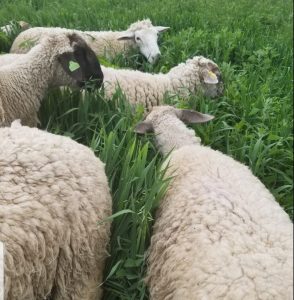 Quee was not satisfied with the stand of the spring cover crop in 2018, and noted that the cover crop growth was less robust because they entered the season with dry weather, as shown in Table A1. “There were more thistles in the plots than I would have liked, and because of the dry weather, the cover crop was stunted and did nothing to impede the thistles’ growth.” Quee plans to continue grazing sheep and other livestock in cover crops on his vegetable fields during fallow years in their rotation, but does not plan to continue squeezing grazing into tighter windows between crops. Quee was also struck by the differences in soil nitrogen and phosphorus levels between his farm and Black’s, and is re-evaluating his fertility monitoring program. “I primarily use harvest data as my indicator of soil health, but seeing the numbers from the soil test was eye-opening,” he said. 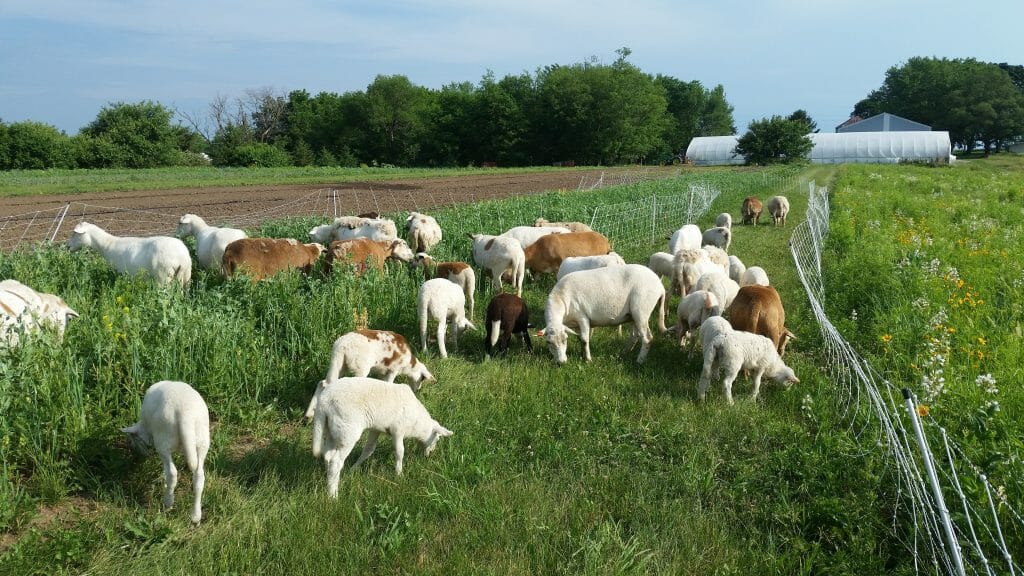 Sheep graze in the experimental plots at Quee’s.

Black plans to adjust the cover crop grazing trial to understand if the grazing has an impact on vegetable yield and soil fertility in the year following grazing, rather than the same year; she suspects same-year studies may not allow enough time for nutrients to become available.

Broccoli harvested and ready to be measured at Quee’s. 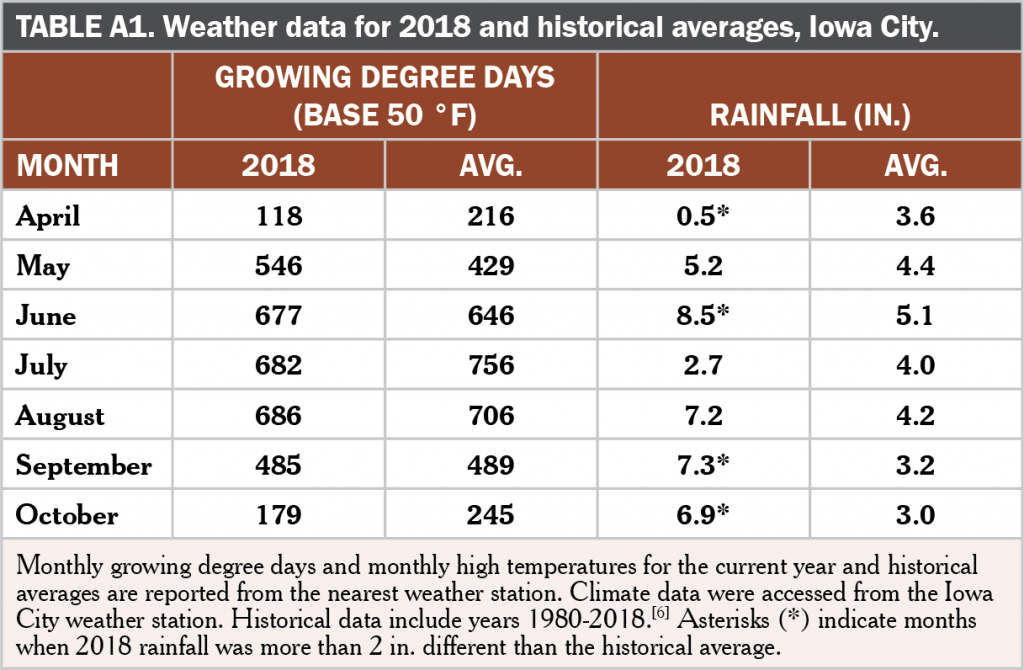