This project was funded by Ceres Trust; seed provided by Johnny’s Seeds 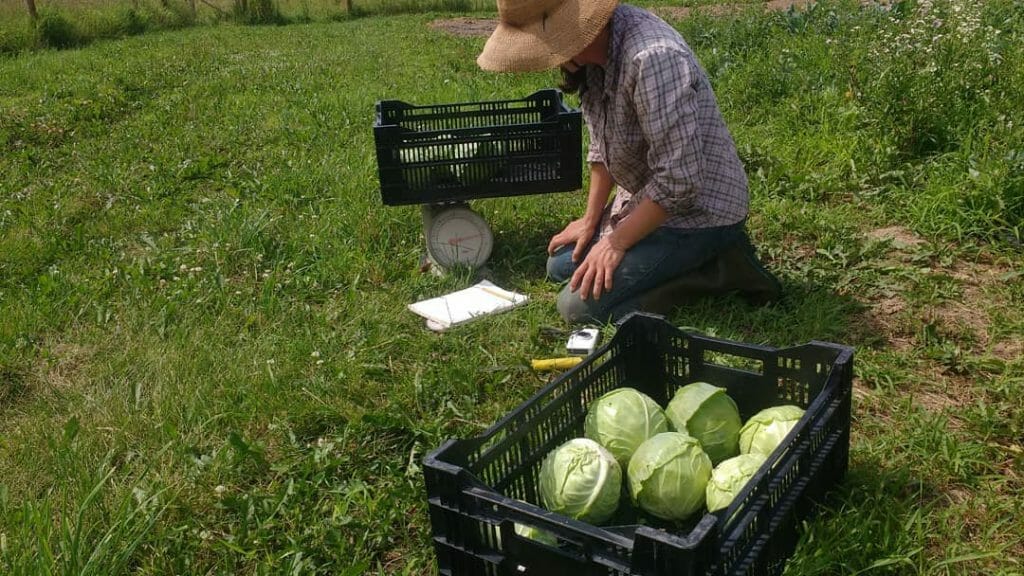 Emily Fagan weighing cabbages for the variety trial on July 18, 2019.

Previous PFI trials have looked at heat-tolerant varieties of broccoli and head lettuce; for 2019, the trial focus was on cabbage.[1–4] “We want to be able to give people cabbage during the summer, when people want to make coleslaw,” said Emily Fagan, one of the farmers who participated in the trial.

All farmers planted four replications of cabbage varieties in randomized, replicated trials. Varieties were selected based on farmer preference, and their suitability for summer production, based on the Johnny’s catalog descriptions. Caraflex was expected to produce a smaller head (in weight), based on the varietal characteristic, and it was also the only conical-shaped variety included in the trial. Seeds for the trials were provided by Johnny’s Seeds (Winslow, ME).

Production practices including mulching, spacing, irrigation, planting dates and harvest dates were determined by farm and are detailed in Table 1. All farmers transplanted cabbage starts during June (Fagan also transplanted a succession in May), and all cabbages were harvested by mid-August. All farmers used at least some drip irrigation, and spacing varied by farm, with Black’s having the tightest spacing (Table 1). 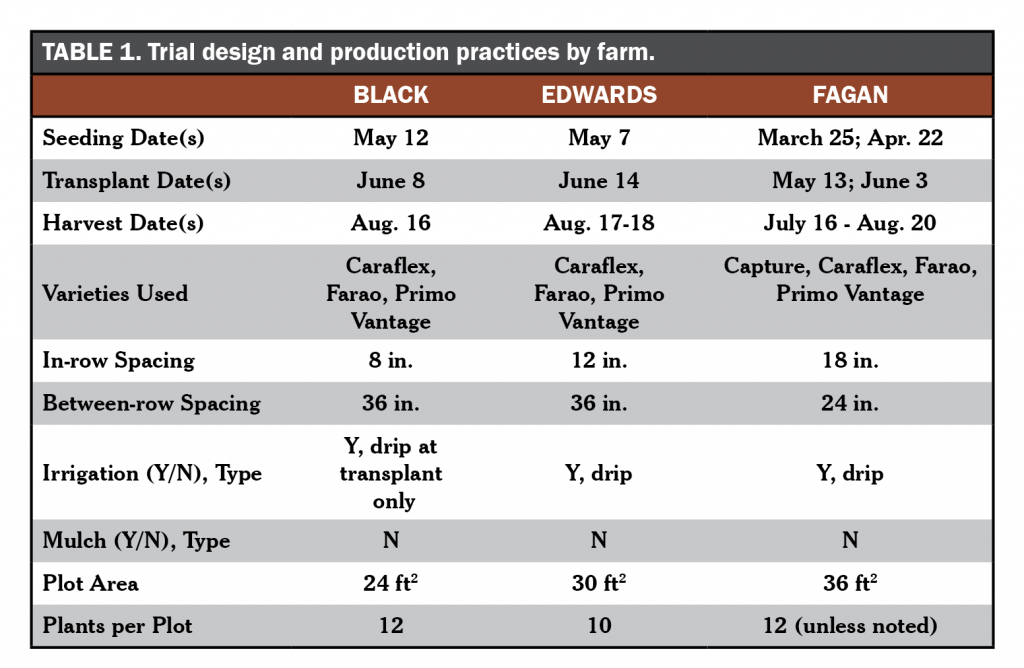 Farmers collected yield data by plot, including the number of heads harvested and harvest weight. During each harvest they also scored each plot for issues with quality, specifically: head splitting, black rot and cabbage worms. Presence of these issues in each plot were scored as “much”, “some”, or “none”. To create average scoring for quality, numerical values were substituted in the following manner: “much” = 0, “some” = 0.50, and “none” = 1.0.  A score of 1.0 indicates that the farmer did not see any quality issues during harvest; scores closer to 1.0 indicate better quality. These scores were not statistically analyzed.

To determine the effect of variety on cabbage yield, we calculated Tukey’s least significant difference (LSD). If the difference in yield measurements for any two varieties was greater than or equal to the LSD, we confirm that variety had a statistically significant effect on yield. On the other hand, if the difference in any yield measurements was less than the LSD, we consider the varieties to be statistically similar. We used a 90% confidence level to calculate the LSDs, which means that we would expect our rankings to occur 90 times out of 100. We could make these statistical calculations because the farmers’ experimental designs involved replication and randomization of the three treatments (Figure A1). 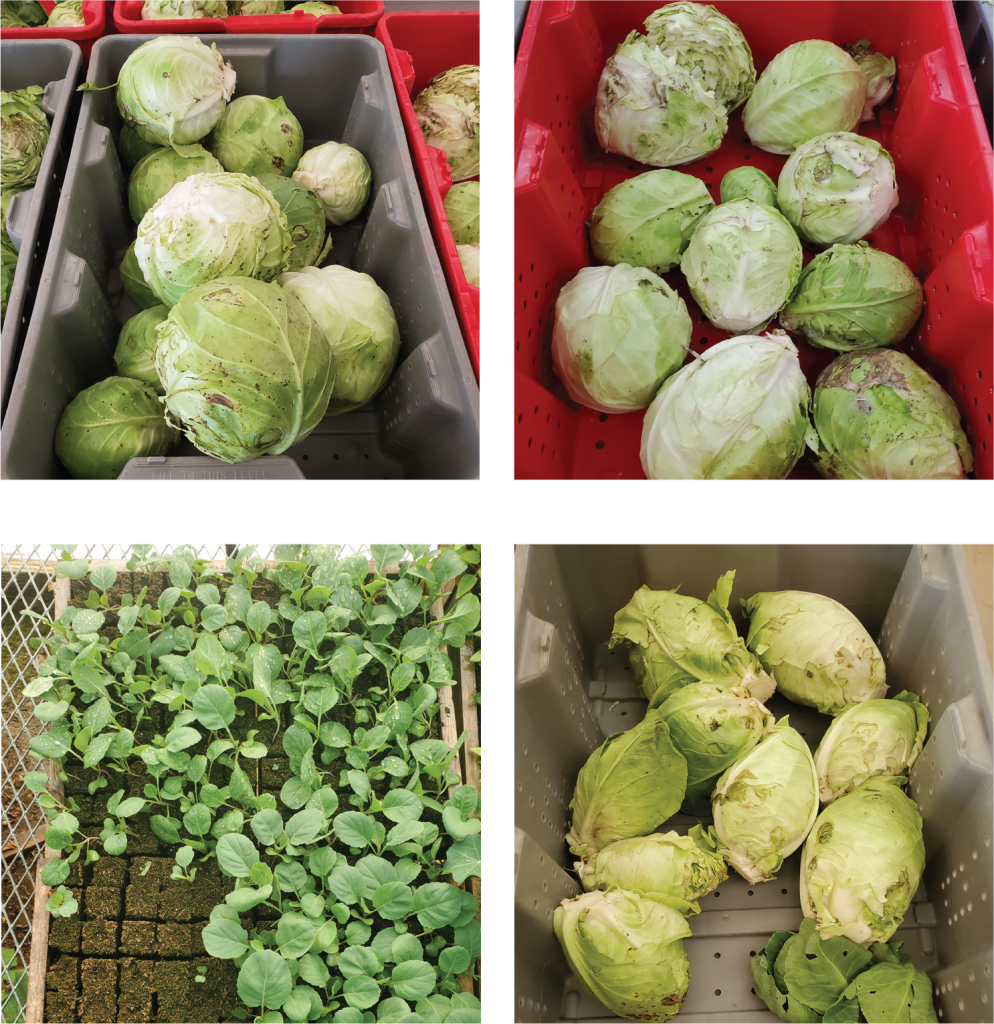 Yield and percent of harvestable heads at Black’s were statistically similar among varieties (Table 2). This may have been due to high variation in the data resulting from only three replications of each variety. All varieties at Black’s struggled with cabbage worms, and some black rot, as shown in the photos. She noted that a Caraflex plot had the worst black rot, and one Farao plot had no black rot present. Farao, however, had the most issues with splitting heads (Table 3). Like the other farmers, Black seeded Capture in soil blocks, but too few germinated to include it in the trial.

Similar to the results at Black’s, yield among cabbage varieties were statistically similar at Edwards’ farm. Primo Vantage less reliably set heads compared to Caraflex and Farao (Table 4). Edwards observed a lot of variability in head size throughout the field. She suspected the rather uneven production was due, in part, to weed pressure. Wet soils through May prevented Edwards from transplanting an earlier succession of cabbage for the trial, and disrupted her ideal weed-management schedule. Edwards did not have much trouble with splitting heads, but did have issues with black rot and cabbage worms in all varieties (Table 5). 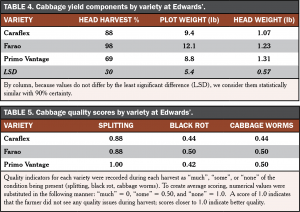 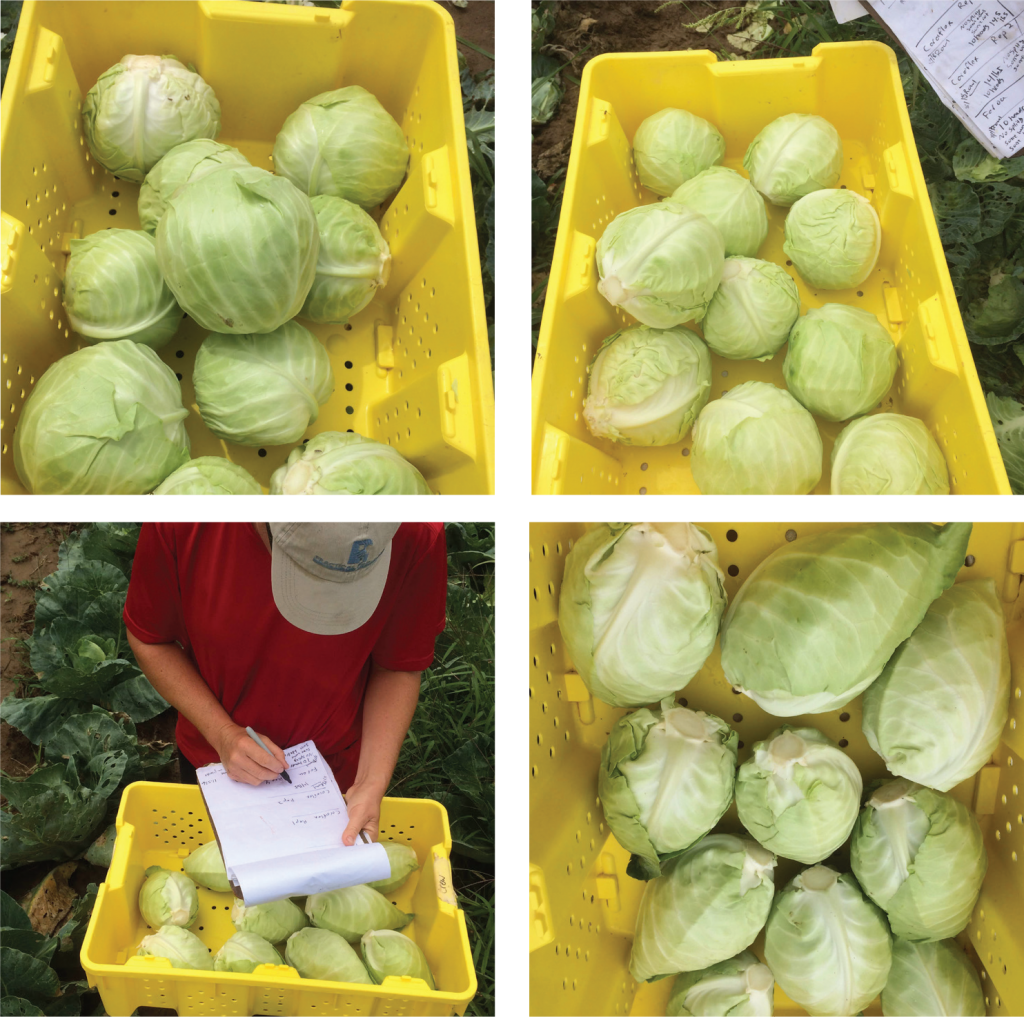 Across both successions, Primo Vantage and Farao had the statistically largest heads (1.39 and 1.40 lb/head) (Figure 1). Caraflex, the only conical-shaped variety included in the trial, finished in the middle, at 1.30 lb/head, and Capture resulted in the smallest heads (1.00 lb/head). 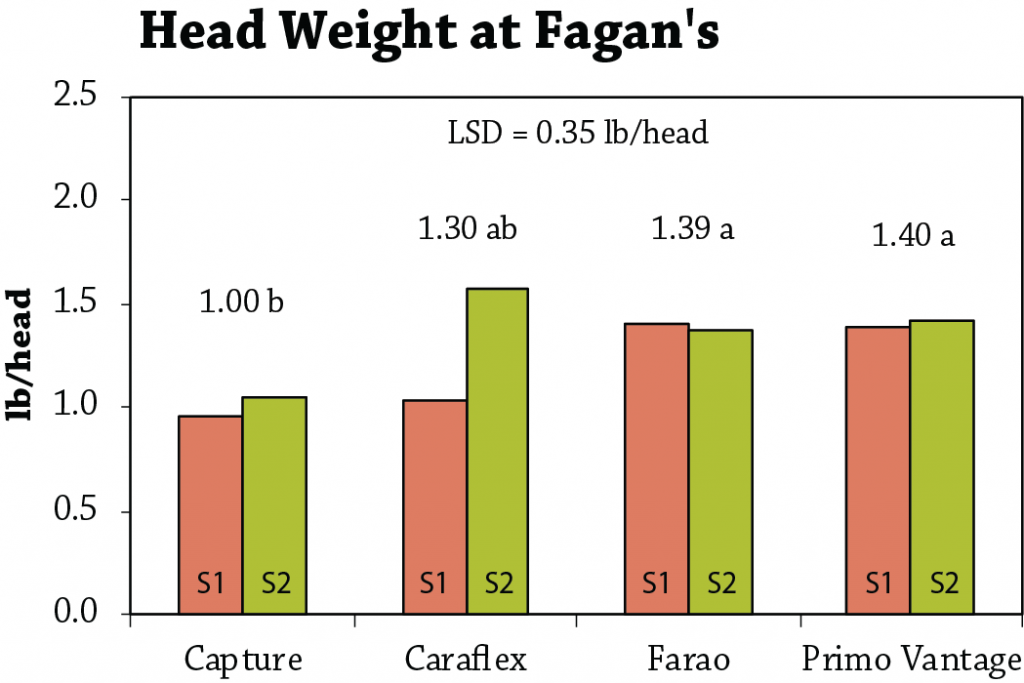 Figure 1. Cabbage head weight at Fagan’s. Columns represent succession mean. Above each set of columns is the variety mean. Results that differ by the least significant difference (LSD; 0.35 lb/head) are followed by different letter-ranking and are considered statistically different with 90 % certainty. The data table with yield values and harvest % for Fagan is available in Table A2.

Fagan was the only farmer to successfully grow and harvest Capture, but will not grow the variety again. “Capture had problems with black rot, and set heads very, very late. Only when I went to till it in after harvesting all the other plots entirely did I realize it had heads. We ate them ourselves, but they were not of good enough quality to sell.” Farao, Primo Vantage and Caraflex from both successions were harvested between July 16 – Aug. 16; all Capture plants in all successions were harvested on Aug. 20.

Fagan’s cabbage trial had pressure from cabbage worms, which she rated as “some” or “much” incidence in all plots of Succession 1 and “much” in all plots of Succession 2 (Table 6). Capture struggled the most with black rot, while Caraflex and Primo Vantage scored quite well for black rot during both successions. Fagan did not have much trouble with cabbage heads splitting. 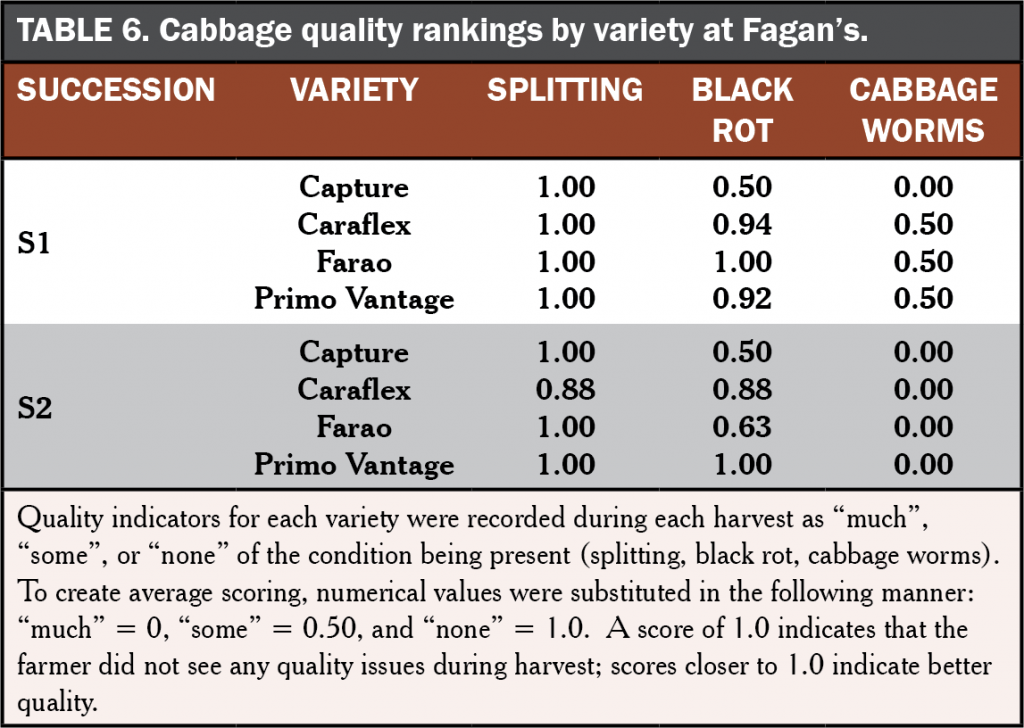 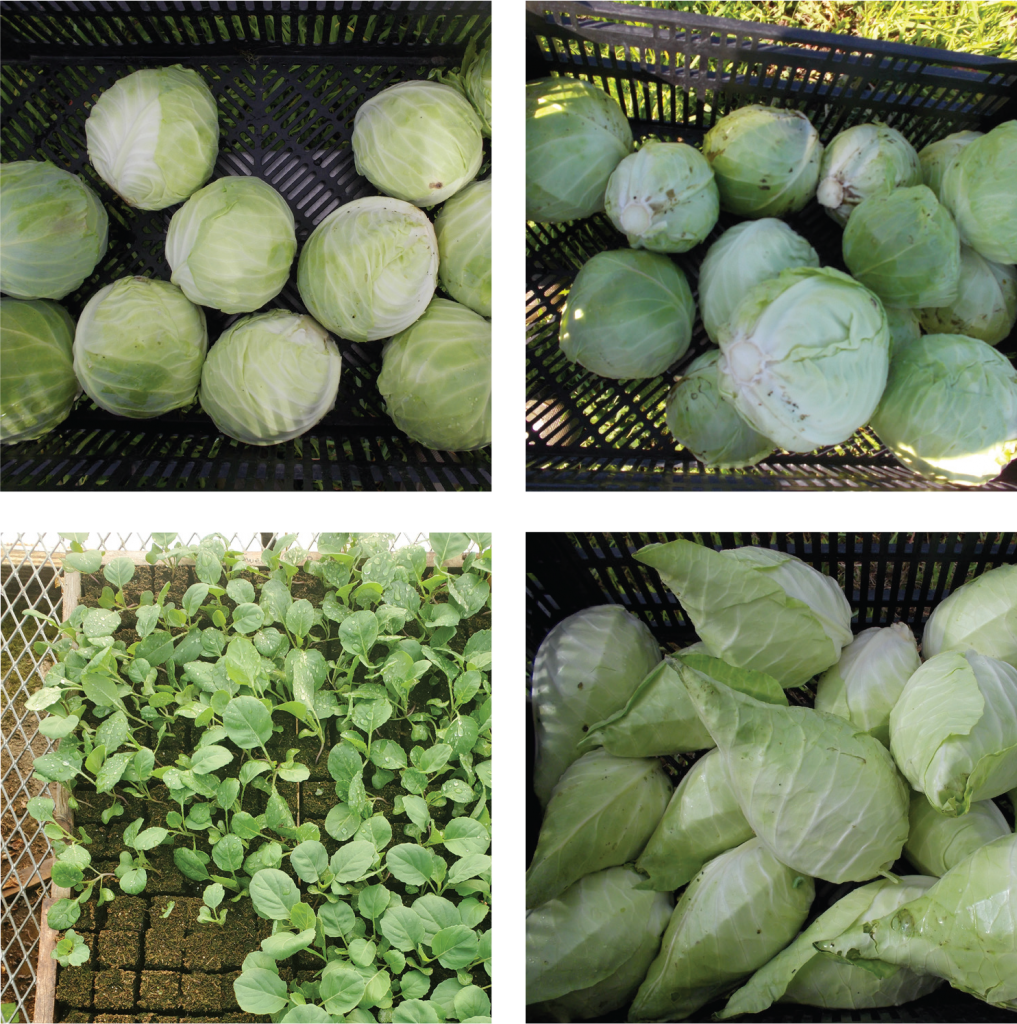 All farmers in the trial liked Farao, Primo Vantage and Caraflex; most plan to grow all three again. Edwards noted that CSA members who were not typically excited about getting cabbage were excited about getting a Caraflex (conical) cabbage. So even if it tended smaller it is worth it, for her farm.

Fagan reported that she will definitely continue growing Farao and Primo Vantage. “The quality measurements are really important to me. It doesn’t matter what the cabbage weighs; if it’s ugly no one will buy it.”

All three farmers intend to trial more summer cabbage varieties in 2020, and are hoping drier planting conditions during May will allow them to move the trial forward a couple weeks. 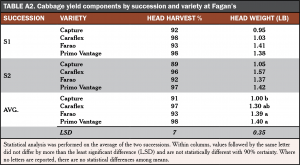