This project was funded by Ceres Trust.

Quee and Sellz seeded cauliflower varieties in late spring and transplanted in mid-summer for fall harvest. Quee included two successions; Sellz included only one. Management at both farms is shown in Table 1.

Both cooperators planted cauliflower varieties in randomized and replicated strips (Figure A1). 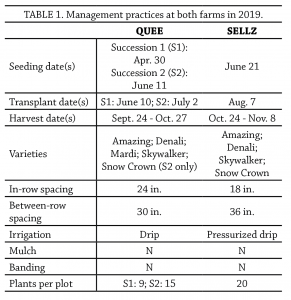 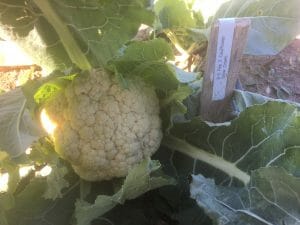 To rank the performance of cauliflower varieties, we calculated Tukey’s least significant difference (LSD) for each measurement: harvested curds, average curd diameter, average curd weight and total plot weight. For each measurement, we assigned different rankings to the varieties if the difference observed between any two varieties was greater than or equal to the LSD – we also refer to this as a statistically significant effect. On the other hand, if the difference observed between any two varieties was less than the LSD, we consider the varieties to be statistically similar (those two varieties received the same ranking). We used a 90% confidence level to calculate the LSDs, which means that we would expect our rankings to occur 9 times out of 10. We could make these statistical calculations because the farmers’ experimental design involved replication of the cauliflower varieties (Figure A1). 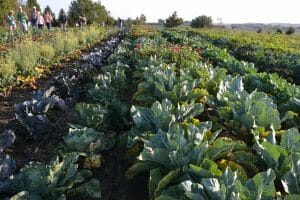 Cauliflower varieties in the field at Mark Quee’s in September 2019.

Succession 1 was started and transplanted about 1 month earlier than succession 2, but both groups were last harvested on October 27. Mardi performed better than all other varieties in succession 1, producing more curds per plot and larger curds than any other variety (Table 2). Denali and Amazing were middle of the pack, with Skywalker having the smallest curds. No statistical differences among varieties were observed during succession 2, which had fewer plots reach maturity due to heavy bird predation on the plants. 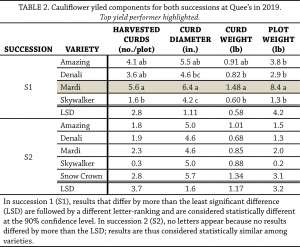 Sellz was only able to harvest Snow Crown curds; no other varieties produced curds for her (Table 3). She had similar results during a 2018 trial, and wondered if it was related to the weather that year, or the field location. Of the varieties chosen, Snow Crown has the fewest days to maturity – 50 days compared to 80 days for Skywalker (68 for Amazing, 73 for Denali). Planting dates were appropriate for fall planting; the plants had 93 days in the field after transplanting. Numerous factors impact curd development including nutrition (cauliflower are heavy feeders), but most commonly, temperature – cauliflower curd development is even more sensitive to temperature than broccoli head development. A condition called “blind bud” can occur, where the plant will not form a central bud and subsequently, not form a head.

Sellz noted that the transplants were in pretty rough shape when they went into the field due to being late with transplanting and irregular watering. Stressed transplants could have led to the later issues with curd development, even though the plants survived.

“I had never grown cauliflower in Iowa before conducting this trial,” Sellz said. “From my experience and practices, Snow Crown will be my go to variety for future fall plantings.”

“Amazing and Denali have been my go-to varieties for summer production,” Quee said. “I’ll have to look harder at Mardi. I didn’t have any prior experience with Mardi and will definitely continue to see how it fits in my successions.” Going forward, he plans on using all of these varieties except for Skywalker. “Amazing, Denali, Mardi and Snow Crown provide a nice harvest window from a single planting/transplanting and seem to account for a lot of variables.” 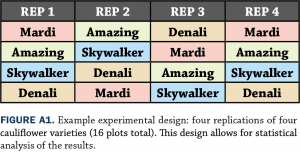 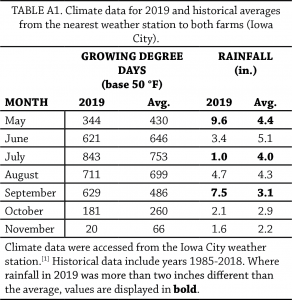