Cover crops can provide a variety of on-farm and off-farm benefits, including erosion reduction, weed control and nutrient scavenging.[1] Cereal rye is easy to establish in many soil types and can provide high amounts of biomass needed for effective weed control. Previous studies in Iowa have shown that a cereal rye cover crop can suppress weeds going into soybean and even reduce herbicide passes.[2,3] Despite the benefits of cover crops to water and soil quality and weed control, the direct costs associated with establishing and managing them remain a barrier to adoption for many corn and soybean growers in the Midwest.[4]

Objective: Determine if the use of a cereal rye cover crop could reduce herbicide costs in soybean enough to cover the costs of cover crop establishment without sacrificing weed control or soybean yield. 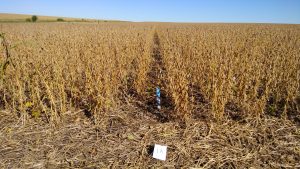 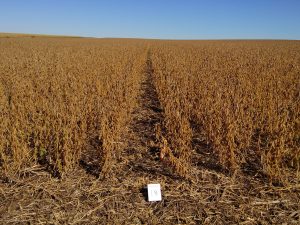 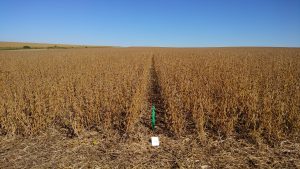 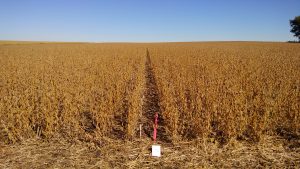 Sam Bennett has been growing cover crops in his corn and soybean rotation for several years and has observed their positive impacts on his farm’s soil quality and weed control. Seeking to encourage other growers to adopt cover crops, Bennett wondered if the highly effective weed control he observed on his farm from cereal rye would allow him and other growers to save money by reducing their herbicide programs.

This trial was conducted by Sam Bennett near Galva in Ida County in northwest Iowa. 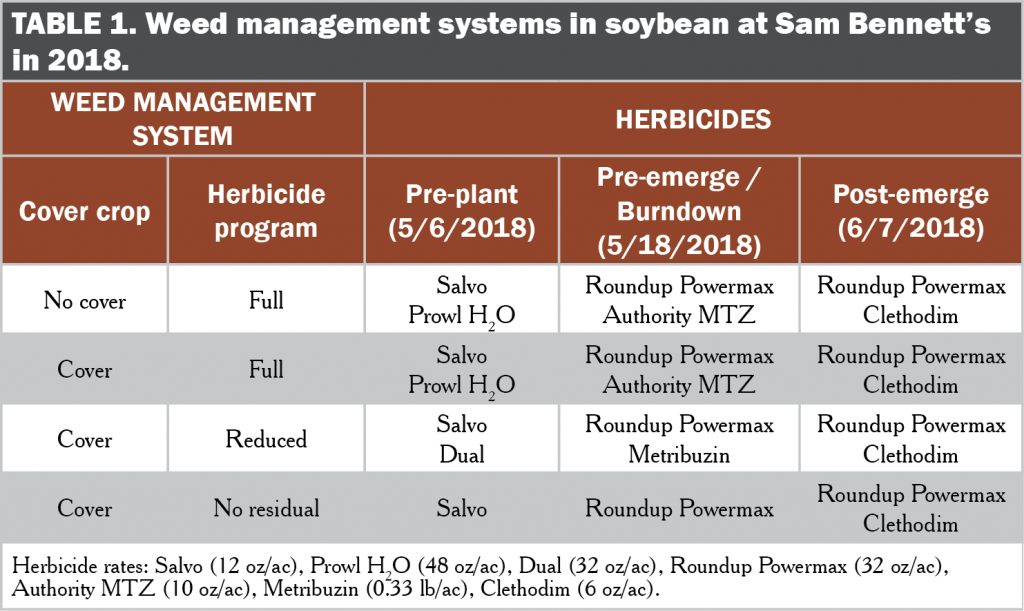 Cereal rye (var. Elbon) was broadcast in the cover crop treatments with a 60-ft wide highboy seeder on Sept. 11, 2017. The seeding rate was 75 lb/ac (1.4 million seeds/ac) and the previous crop was corn. The following spring, on May 6, 2018, pre-plant herbicides were applied according to each treatment’s specifications (Table 1). On May 16, soybeans were no-till planted in all four treatments in 15-in. rows and at a planting population of 140,000 seeds/ac. Cereal rye biomass was sampled, dried and massed on May 18. On the same day, herbicides were applied for pre-emerge weed control and termination of cereal rye according to each treatment’s specifications (Table 1). A final herbicide application was applied to all four treatments for post-emergent weed control on June 7.

Soil samples were collected to a 6-in. depth on June 13 to compare microbial activity among soils with a cover crop and soils with no cover. To eliminate redundancy and unnecessary expense, soil samples were not collected from all three cover crop treatments. Samples were submitted to AgSource Laboratories (Ellsworth, Iowa) to determine the burst of CO2-C following rewetting of dried soil using the Solvita assay.

Weed pressure was visually scouted in each plot at the time of harvesting soybeans. Soybeans were harvested from the entire 60-ft width of each strip on Sept. 27.

Weed pressure was consistently low in all four treatments despite experiencing higher weed pressure in the same field in previous years. “From the combine cab, I counted just a few waterhemp plants and virtually no marestail, which has been the big problem weed on this farm before,” Bennett said. This is consistent with previous findings that cereal rye can contribute to suppression of marestail and waterhemp. A two-year study in Kansas found that cereal rye with biomass levels as low as 326 lb/ac improved marestail suppression by 96% compared to a no-cover control.[5] Another study, from Iowa, found that cereal rye biomass levels of 3,200 lb/ac can delay waterhemp emergence until late May, which can provide soybean with a competitive advantage.[2] Cereal rye biomass in this trial was consistent among the cover crop treatments and averaged 3,873 lb/ac. Cold spring temperatures and below-average rainfall in April may have contributed to reduced weed pressure across all treatments in 2018 (Figure A1); however, Bennett noted that some of his other fields without a cover crop did have weed problems at the time of this study.

Average soybean yield is provided for each treatment in Figure 1. There was no statistical difference in yield among treatments. This is consistent with findings from previous on-farm studies that soybean yields are not affected by a properly managed winter cereal rye cover crop.[6] Soybean yields at Bennett’s far exceeded the five-year Ida County average of 59 bu/ac.[7] 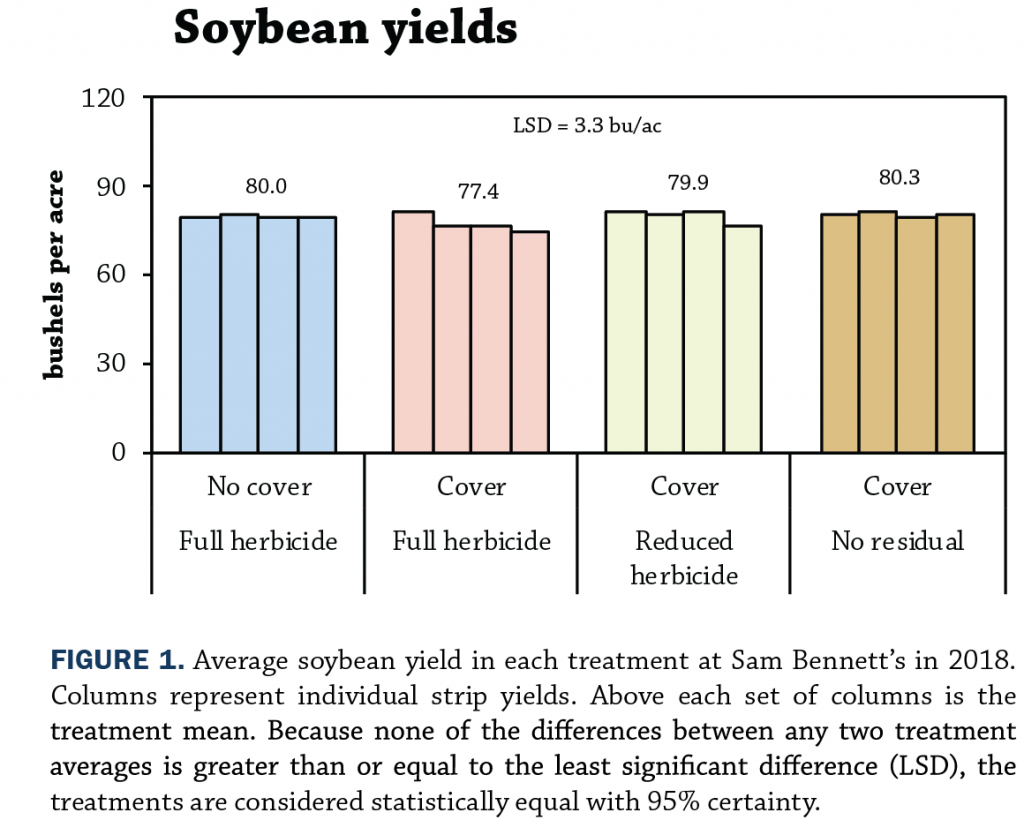 The Solvita assay determines soil microbial activity by measuring the amount of CO2-C respired over a 24-hour period from a dried soil sample that has been rewetted and held at an ideal temperature. CO2-C is a partial indicator of soil health. The presence of a cover crop had no effect on the CO2-C burst at Bennett’s (Table 2). 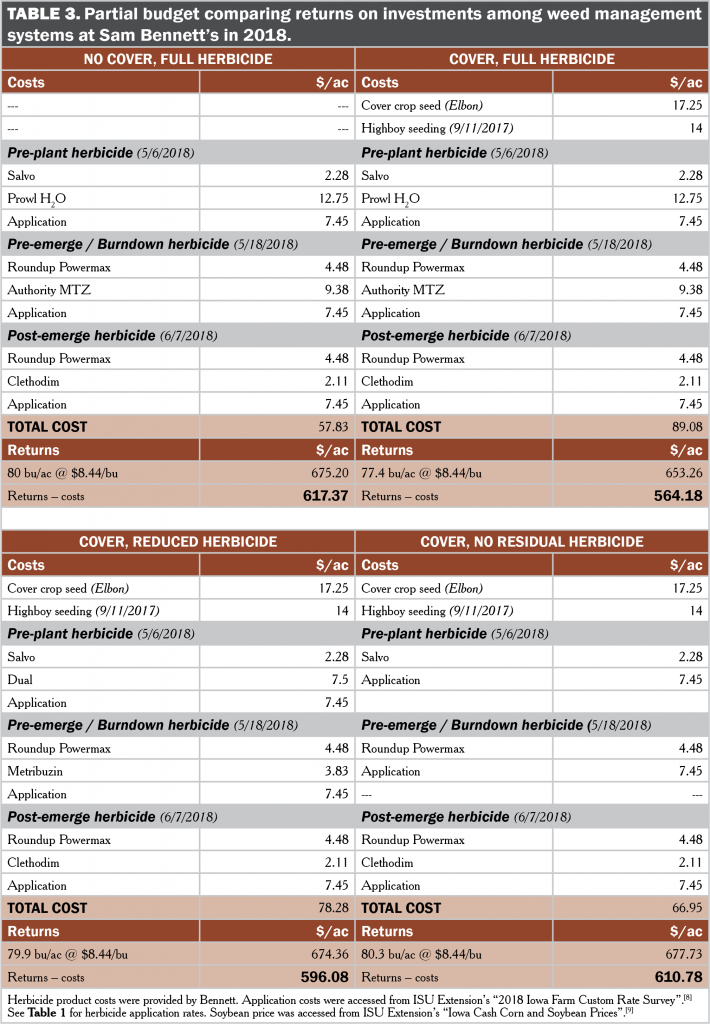 At the onset of this trial, Bennett was already a fan of cover crops. “In our no-till/strip-till system, I already see the benefits of the cover crop in soil health, loosening compaction and building organic matter,” Bennett said. However, Bennett understood the financial concerns stopping many growers from using them. Having observed improved weed control in soybean fields with a cover crop, Bennett wanted to see if he could adjust his herbicide program to take advantage of the weed controlling benefits of cereal rye.

In this experiment, Bennett found that no cover crop treatment could reduce herbicide costs enough to fully pay for the costs of cover crops. However, reducing the amount of herbicide applied did not sacrifice weed control or soybean yield, and Bennett suspects he could have further cut herbicide costs in his cover crop fields. “I’ll rely on the rye more than I had been knowing how effective it can be at suppressing weeds. Also, I’ll scout the cover crop fields more intensely to determine if less herbicide is needed in-season versus just prophylactically spraying like we have been with no cover crop,” Bennett said. The results of this trial support the conclusion that when growers seed a cereal rye cover crop ahead of soybeans, herbicide costs can be reduced.