This project was supported by the Iowa Department of Agriculture and Land Stewardship, Division of Soil Conservation and Water Quality, the Walton Family Foundation and AgSource Laboratories.

Proper management for corn following a cover crop typically requires planting the corn ten to 14 days after terminating the cover crop. When this planting rule is followed, corn yield drag after a cereal rye cover crop can be avoided as demonstrated by nine years of research by farmers in Iowa.[1] Yield drag from cover crops is thought to result from early season soil and fertilizer nitrogen immobilization[2,3] and increased prevalence of disease pathogens.[4] The amount of cover crop biomass produced could be a contributing factor to yield drag. Corn populations in an Iowa experiment[5] and soil nitrate in a Michigan experiment[3] decreased with increasing amounts of cereal rye biomass. 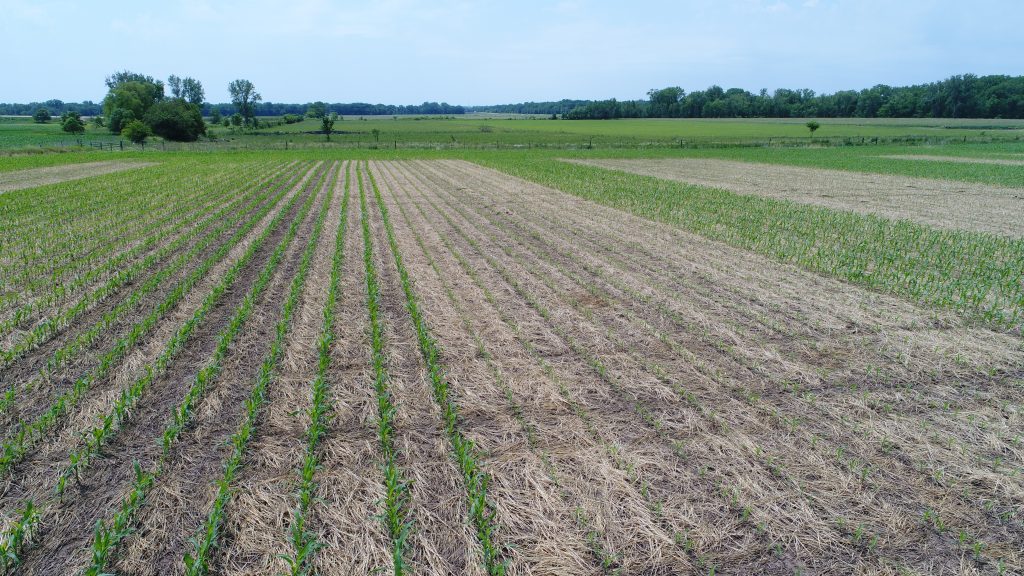 Objective: The objective of this research project was to determine if terminating a cover crop before accumulating 3,000 lb/ac of biomass would allow corn to be planted sooner than 10 days after termination (DAT) without sacrificing yield or increasing disease incidence.

PFI cooperators Wade Dooley and Dick Sloan kept an eye on their cereal rye cover crops in the spring and terminated them before they produced 3,000 lb/ac of biomass. “I need to know more about the interaction of a cereal rye cover crop and corn growth and production,” said Dooley about conducting the trial. Sloan was most curious about eliminating the delay between cover crop termination and corn planting. “I want to plant corn when my neighbors are planting so they will consider cover crops on their fields.” 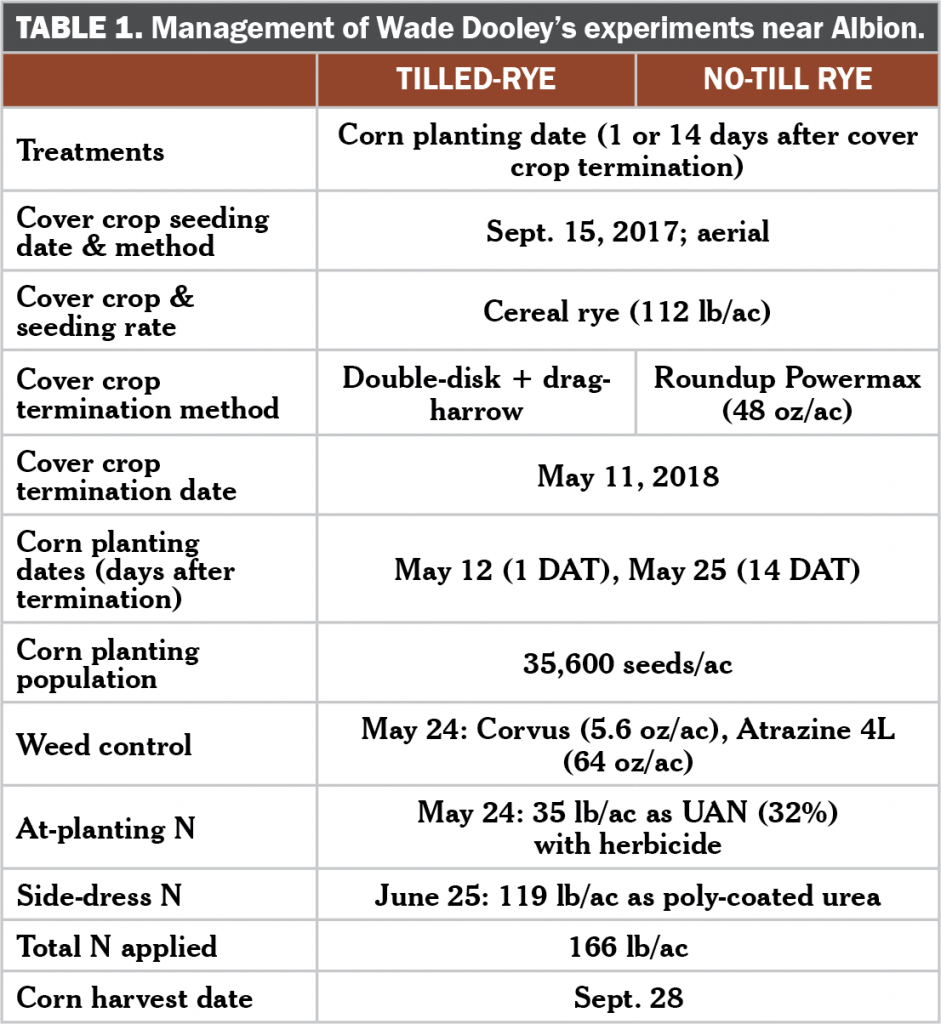 Dooley and Sloan planted cover crops in Fall 2017 and terminated them in Spring 2018 before they accumulated 3,000 lb/ac of biomass. Detailed summaries of the management of experiments for both farms is provided in Table 1 and Table 2. 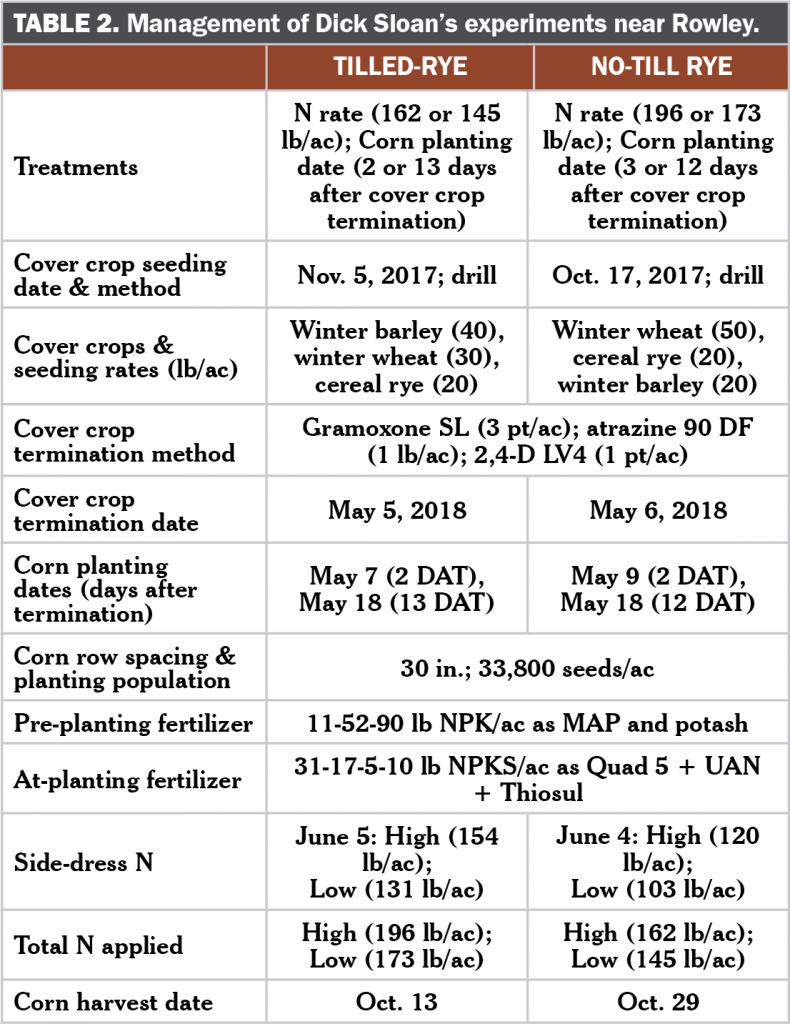 Cover crop biomass was sampled within 24 hours prior to termination in all experiments. Aboveground biomass was collected from 1-ft by 1-ft quadrats, air-dried for three weeks and weighed. 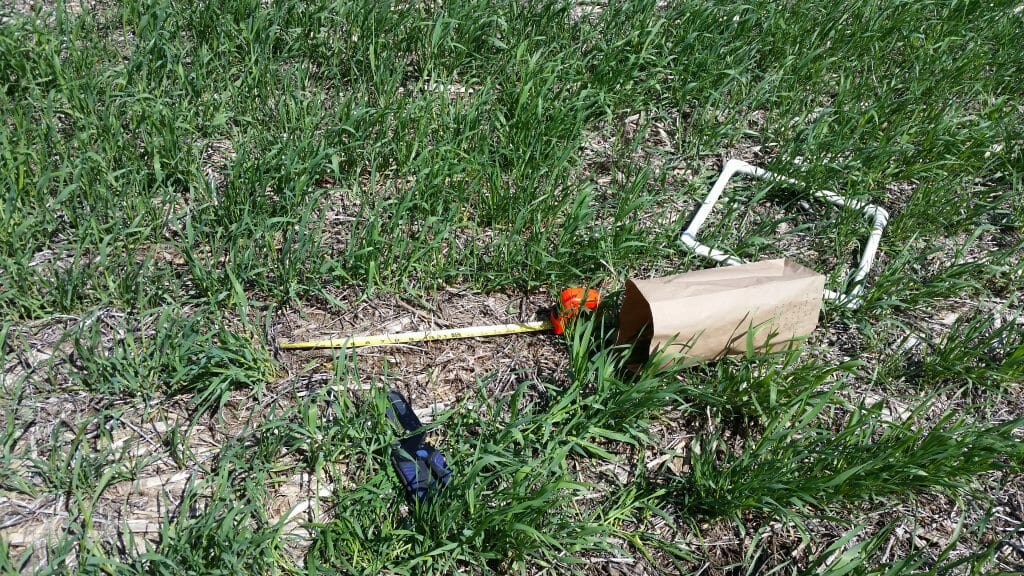 Incidence of corn seedling disease was assessed by Dr. Alison Robertson’s lab team (ISU Department of Plant Pathology and Microbiology). Assessments occurred 17 to 20 days after planting corn for each treatment and were done prior to establishing the split-plot treatment (nitrogen rate) in Sloan’s experiments. Fall stalk rot assessments were also conducted by Dr. Robertson’s lab team on Sept. 13 in both of Dooley’s experiments and in Sloan’s corn-corn experiment.

Soil samples were collected to a 6-in. depth in mid-June in all experiments. Samples were tested using the Solvita assay at AgSource Laboratories (Ellsworth, IA) to determine the burst of CO2-C following rewetting of dried samples. 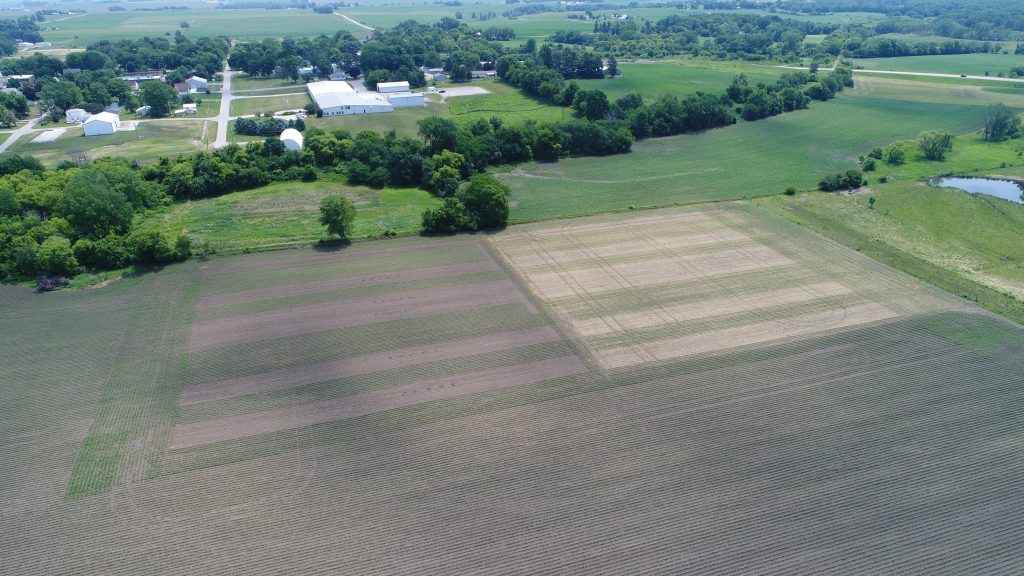 Tilled-rye (left) and no-till rye (right) experiments at Wade Dooley’s showing replicated strips of both treatments – corn planted 1 to 3 or 12 to 14 days after termination of cereal rye. Photo taken June 8, 2018.

Corn was harvested individually from each strip on both farms and corrected to 15.5% moisture.

The results of these experiments indicate the incidence of disease in corn seedlings is not influenced by the duration between terminating cover crops and planting corn (Table 4). These results conflict with findings of Arlyn Kauffman’s 2018 on-farm trial as well as findings of a 2017 Iowa State University study – both of which found corn planted shortly before or after terminating a cereal rye cover crop had higher incidence of seedling diseases than corn planted 10 or more days after termination.[4,7] 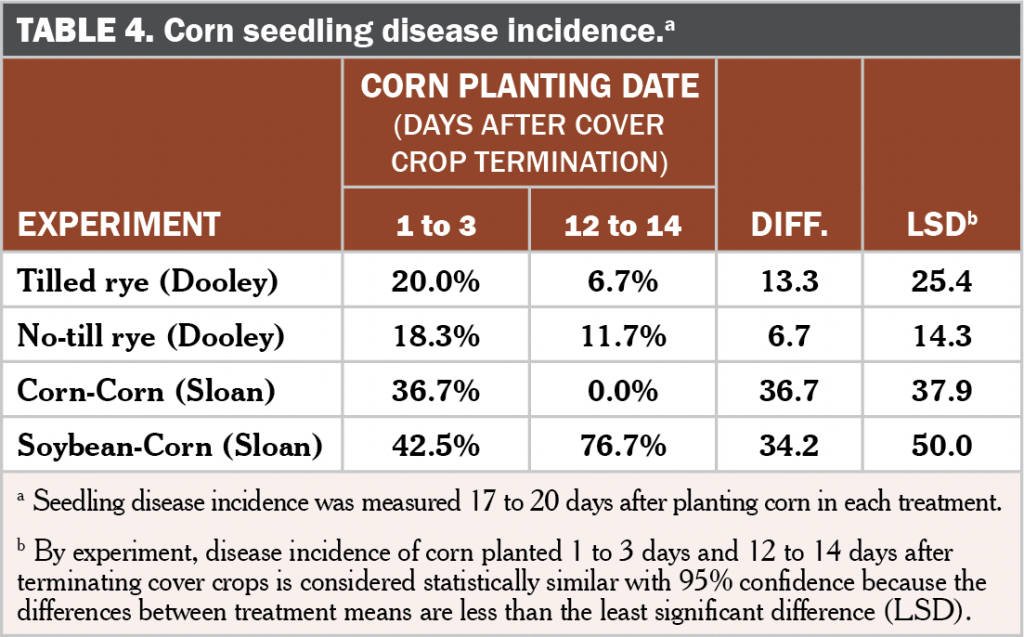 For each experiment, Solvita assays revealed no significant differences in the amount of CO2-C respired over a 24-hour period between soil samples collected from corn-planting-date treatments (Table 5). 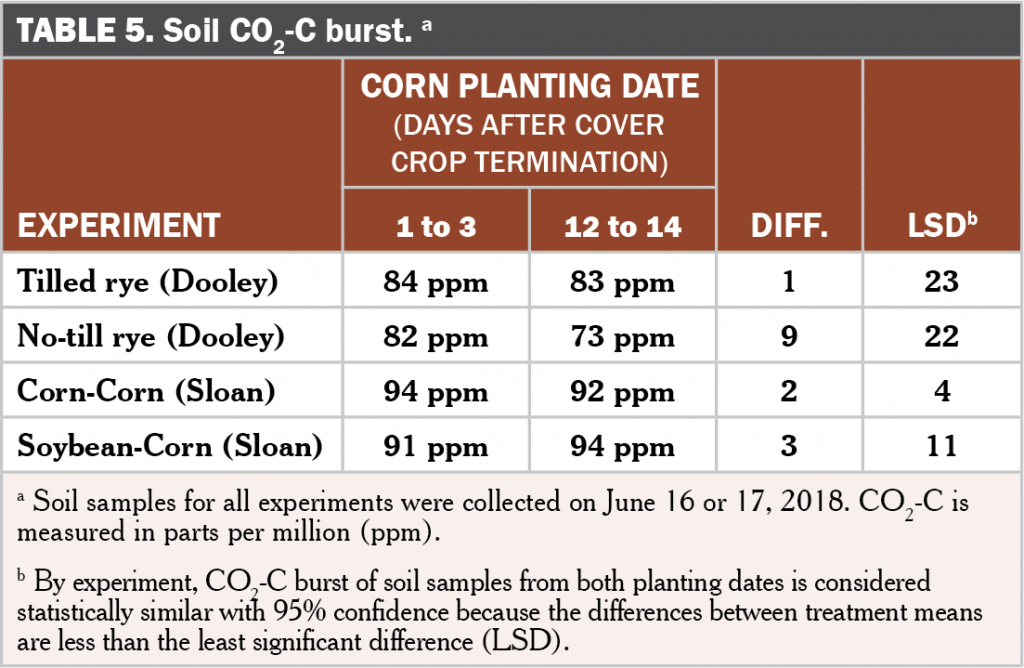 Incidence of stalk rot differed significantly between corn planted 1 versus 14 days after tilling rye in Dooley’s tilled-rye experiment (Figure 1). Incidence was 14% in corn planted 1 DAT and 0% in corn planted 14 DAT. Causes of the difference in stalk rot incidence between treatments in Dooley’s tilled-rye experiment are not clear as stalk rot pathogens are not yet well understood. There are many different stalk rot pathogens and each can be affected by countless environmental factors.[8] Average rainfall in May was well below normal but jumped to well above normal in June (Figure A1). It is possible soil moisture was ideal for infection of corn by stalk rot pathogens at the time of planting the early-planted corn (May 12) but less ideal at the time of the later corn planting date (May 25). There was no difference in incidence of stalk rot between treatments in Dooley’s no-till rye experiment. 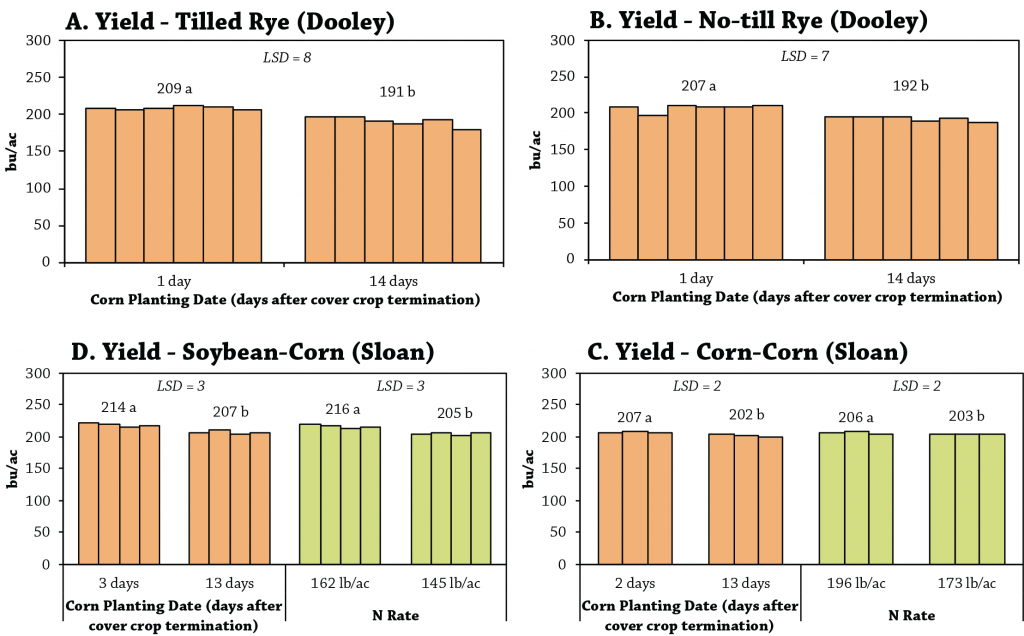 Our yield results run contrary to the prevailing understanding that planting of corn should be delayed by several weeks after termination of a cover crop to avoid yield drag.[2]

Terminating a fall cover crop before it accumulated 3,000 lb/ac of biomass allowed Sloan and Dooley to plant corn as early as 1 day after cover crop termination without increasing the incidence of seedling disease or decreasing yield. While these results may be encouraging for growers seeking to plant corn earlier after terminating a cover crop, a couple points should be considered before adopting the practices used in these trials. First, the dynamics of the relationship between cover crop biomass and corn yield are complex and not well understood. Evidence from other studies has produced inconsistent results – sometimes yields increase proportionally to decreases in cover crop biomass, but other times that is not the case.[10] The second thing to keep in mind is that while terminating a cover crop prior to accumulation of 3,000 lb/ac of biomass may sometimes eliminate yield drag in corn, it may also eliminate their benefits such as improved soil quality and weed control. These results highlight the idea that growers should have clear goals in mind for a cover crop before planting and manage it accordingly. 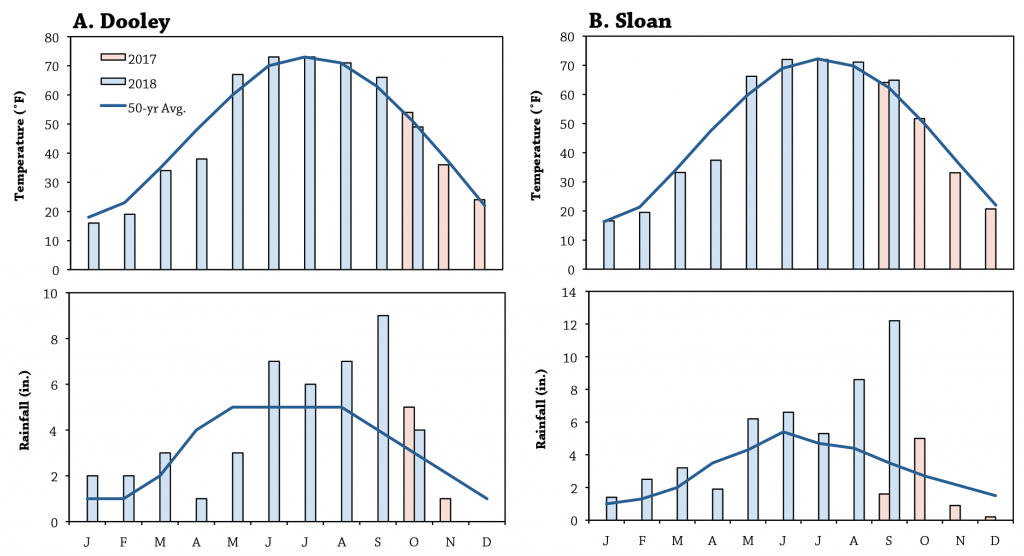 FIGURE A1. Mean monthly temperature and rainfall for Oct. 2017 through Oct. 2018 and the 50-year averages for A) the Marshalltown weather station (8 mi. from Dooley’s farm in Albion) and B) the Independence weather station (9 mi. from Sloan’s farm in Rowley).[11]