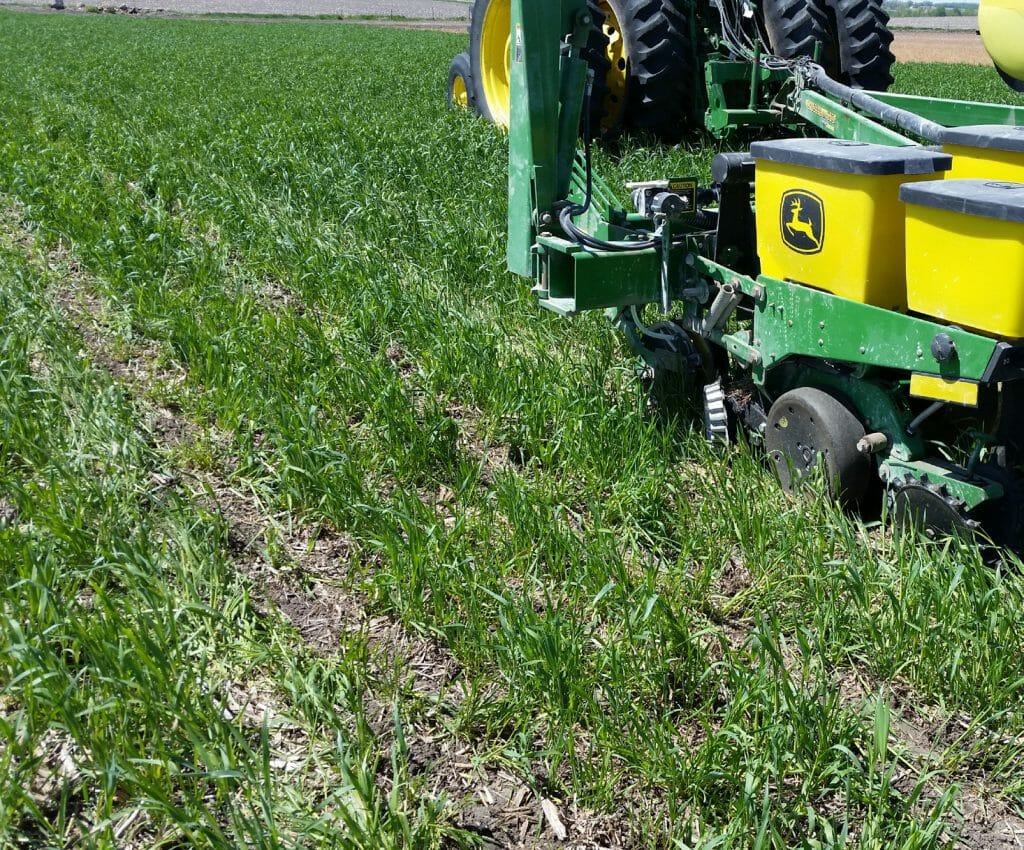 The Iowa Nutrient Reduction Strategy and past on-farm research also stress that proper cover crop management is necessary to avoid any potential for cash crop yield drag (IDALS et al., 2012; Gailans and Juchems, 2014). Farmers report that improper planter settings and insufficient cover crop termination, particularly in the first and second years ever using cover crops, to cause yield reductions in corn (Gailans and Juchems, 2016). But as farmers gain experience using cover crops, they also gain confidence to try new things. Practical Farmers cooperators recently found that delaying cover crop termination to within one day of planting soybeans does not generally reduce soybean yield (Gailans et al., 2015). Recent research at Iowa State University has generated similar results along with the attendant environmental benefits of allowing for increased cover crop growth (Castellano and Mueller, 2016). Previous research in North Carolina has documented corn yield reductions with a cover crop termination within a few days of corn planting due to soil and N fertilizer immobilization by the cover crop (Vaughn and Evanylo, 1998). NRCS guidelines pertaining to crop insurance eligibility does allow for a cover crop to be terminated at corn planting in Iowa (USDA-NRCS, 2014). Farmer-cooperator Dick Sloan wanted to explore if this technique can be applied to corn on his own farm.

The objective of this research project was to quantify the agronomic performance of corn when delaying cover crop termination until the day of corn planting. Sloan adds, “I want to compare my results with corn to what other farmer-cooperators have previously found with soybeans. I want to grow covers longer into the spring, but I don’t want to hurt my corn crop.”

This study was conducted by Dick Sloan on his family’s farm near Rowley in Buchanan County in 2016. 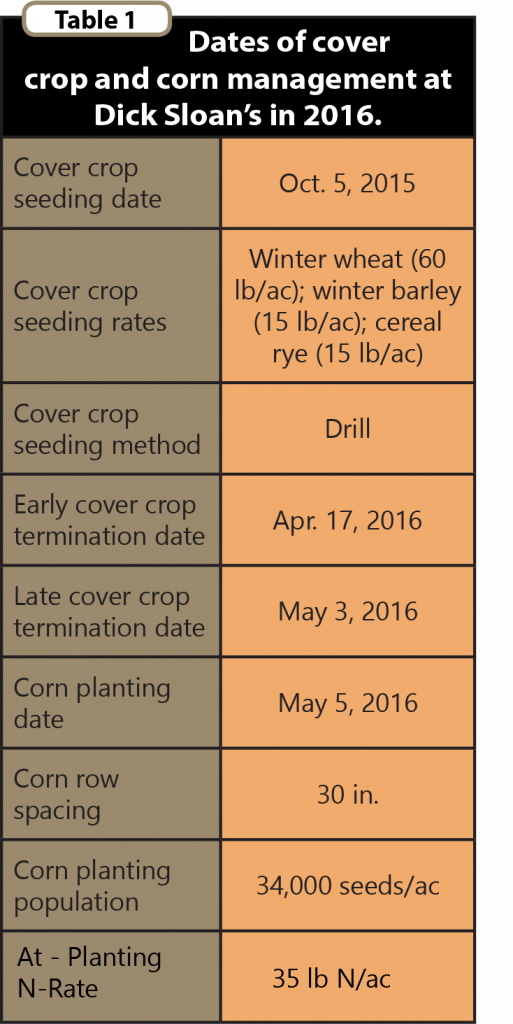 Sloan compared corn planted on the same date following two cover crop termination dates. Cover crop and corn management are presented in Table 1. Sloan drilled a mix of winter wheat, winter barley and cereal rye as his cover crop following a soybean crop in 2015. Corn was planted in 2016 following the cover crop that was terminated approx. 2 weeks prior (early termination) and the day of termination (late termination). Sloan implemented the termination treatments in paired strips replicated five times running the length of the field.

Sloan used LV4 (16 oz/ac) and Durango (40 oz/ac) herbicides for the early termination treatment and Durango (40 oz/ac) for the late termination treatment. “I left LV4 out of the late termination strips because I didn’t want to risk seedling injury that close to planting in case a heavy rain washed the LV4 down into the germination zone,” Sloan says. Regardless of cover crop termination date, corn was planted into treatments on the same date (May 5). Sloan applied 35 lb N/ac (Quad5, UAN[32%], Thiosul) at the time of planting two inches to the side of the row. 105 lb N/ac as UAN(32%) was side-dressed to all treatments on June 11. A second pass of herbicide (Breakfree + Durango) was applied on June 4 to control postemergence weeds in all strips.

Sloan assessed spring cover crop aboveground biomass at both termination dates by clipping shoot material from quadrats (one ft x one ft) placed in each strip. Replicate samples were combined, dried and weighed. 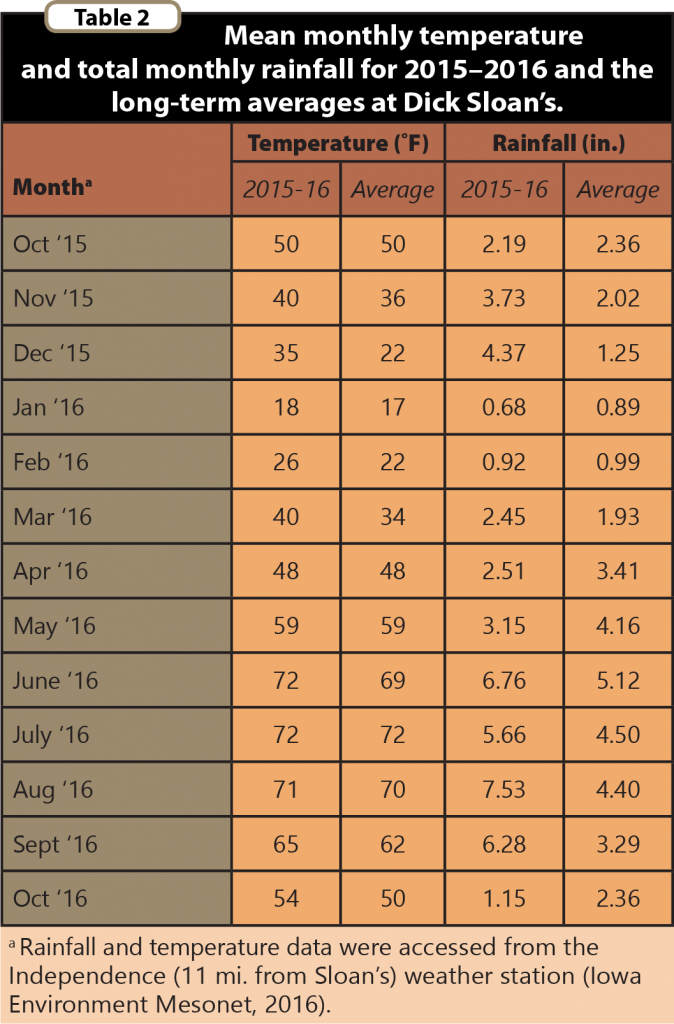 Soil temperatures at the 4-in. depth were collected beginning on April 30 and ending on June 11. Sloan collected temperature data from each strip every few days, typically between 9:30 and 10:30 a.m.

Sloan conducted stand counts from the same position in each strip on May 26, June 1 and June 11. From each position, Sloan counted the number of corn plants in a length of row measuring 17 ft 5 in.

Corn was harvested individually from each strip and corrected to 15.5% moisture.

Data were analyzed using JMP Pro 12 (SAS Institute Inc., Cary, NC). Statistical significance is determined at P ≤ 0.05 level with tendencies noted at the 0.05 < P ≤ 0.10. A repeated measures approach was used to examine the effects of sampling date, treatment, and their interaction on soil temperature and stand count. Corn yield means separations are reported using the Least Significant Difference (LSD) generated from a t-test.

Mean monthly temperature and total monthly rainfall for 2015–2016 near Sloan’s farms compared to the long-term averages is presented in Table 2. November and December 2015 were particularly warmer and wetter than average at both locations. These made for very favorable conditions for cover crop establishment and winter survival. The summer months in 2016 saw approx. 150% more rainfall than the long-term normal. 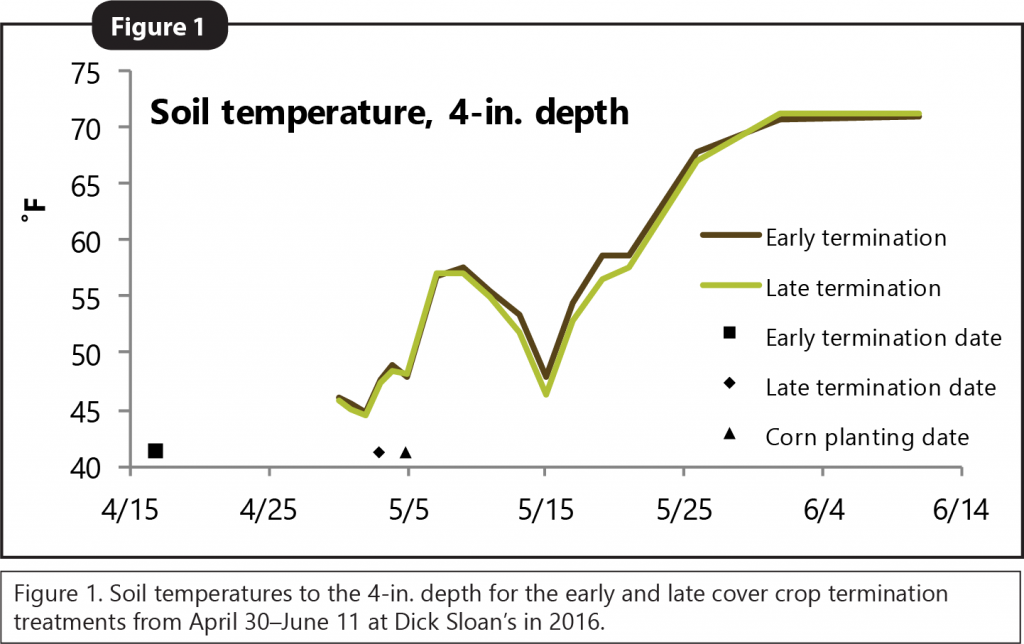 Corn stand counts were determined on three dates: May 26, June 1 and June 11. There was no difference in stand between the two cover crop termination date treatments at any of the dates. Across both treatments and all three dates, the average stand was 32,044 plants per acre. Sloan’s target planting population was 34,000 seeds per acre (Table 1). 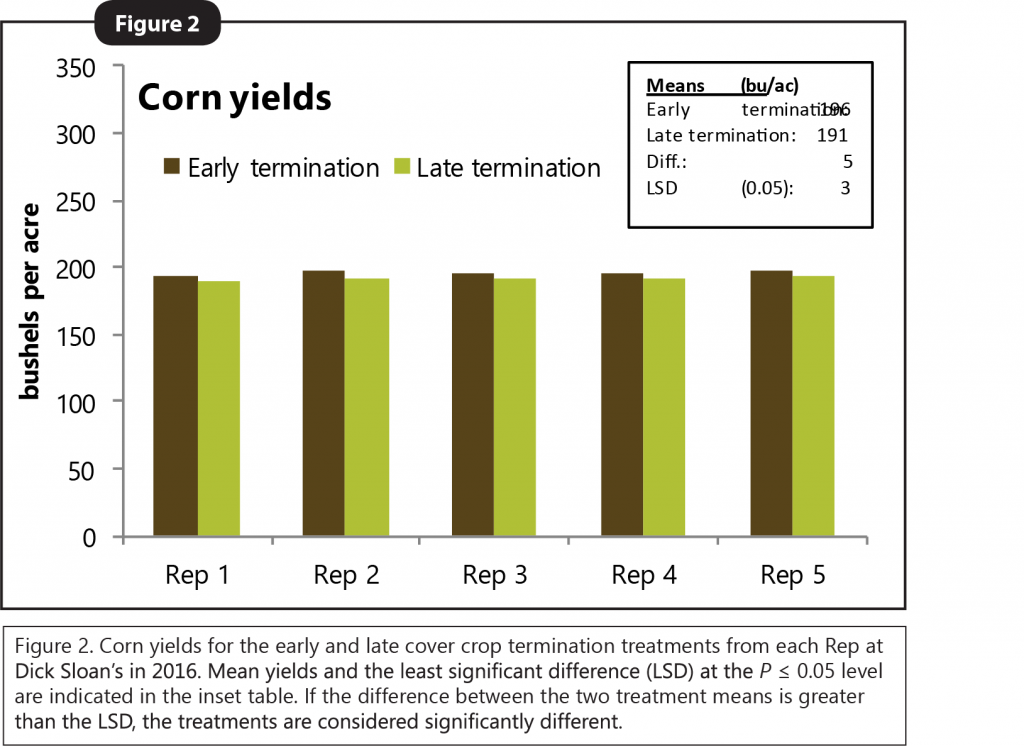 Corn emerging about one month after planting in a late termination strip. Photo taken on June 6. 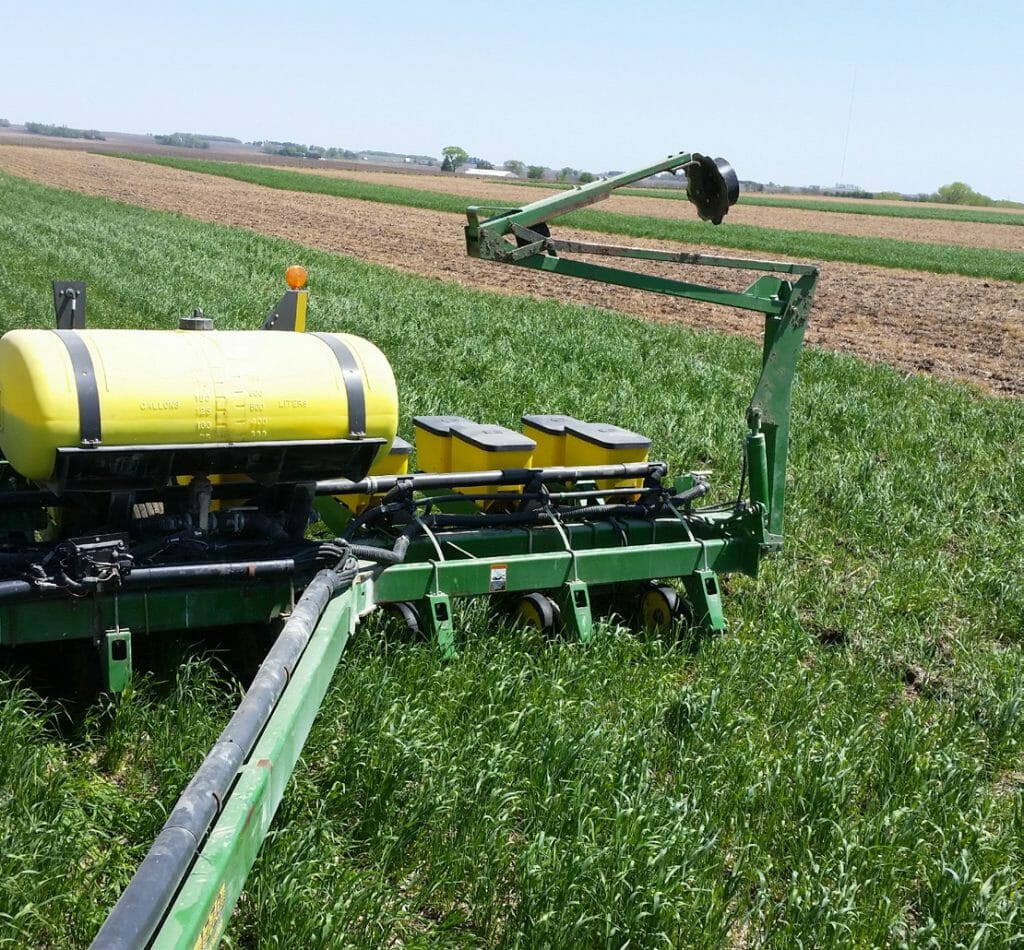 This trial conducted by farmer-cooperator Dick Sloan compared corn seeded on the same date after two cover crop termination dates: two weeks or two days prior to planting corn. Sloan wanted to both let his cover crop grow later into the spring to produce more biomass and plant his corn within a few days of terminating (rather than waiting the customary 10-14 days). “If we can plant corn into ‘green’ covers, it would greatly increase the cover crop biomass without delaying planting.”

On all of his other corn acres outside of this trial in 2016, Sloan terminated a cover crop 10-14 days prior to planting the corn. Ever looking to experiment, Sloan concludes: “I will continue this practice until we can find a way to achieve similar yields with a later termination. I’m interested in evaluating alternatives to glyphosate when chemically terminating cover crops to see if there is the same corn yield drag to ‘planting green’ into freshly killed covers.”