Decomposition of Tea as a Soil Health Indicator in Agroforestry Systems 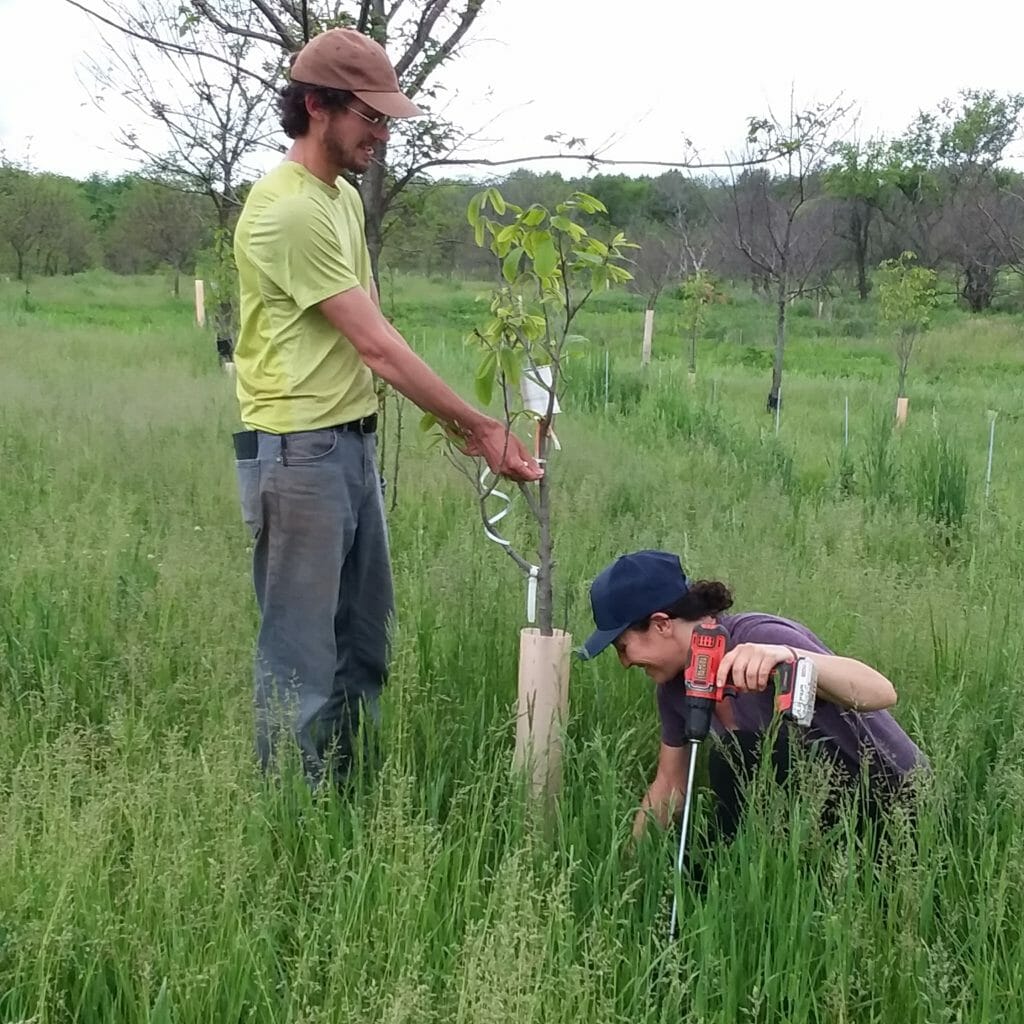 Dane Mainella and Anne Carey, interns at Red Fern Farm, burying tea bags at the base of a pawpaw tree on May 27, 2020.

Several recent studies in Europe[1–3] and the U.S. Midwest[4–6] have assessed the decomposition rates of various plant litters, teas and other household items buried in soils across a range of agricultural production systems. In general, soils from more complex cropping systems involving “soil health promoting practices” like diverse rotations and cover crops increased decomposition of the materials. These accelerated decomposition rates were often associated with higher levels of common soil health indicators like organic matter and microbial biomass as well as improved crop yields.

Building on these studies, Dr. Marshall McDaniel and Teresa Middleton from the ISU Dept. of Agronomy proposed a soil decomposition index (SDI) for assessing soil health. The SDI measures the relative ability of a soil to decompose low-quality residue (C:N>30) to its ability to decompose high-quality residue (C:N<20).[6] Low-quality residue can be thought of as corn stubble or wheat straw – plant litter that is relatively high in C, which can limit availability of soil N to microbes that is necessary for decomposition. High-quality residue on the other hand can be thought of as red clover or alfalfa hay – plant litter that is readily decomposed because its relatively high N-content does not result in N-limiting conditions for microbes. If a soil can decompose low-quality residue at a similar rate it does high-quality residue, it may be safe to say the microbes in that soil are not limited by resources and are in fact operating at their highest potential. Thus, the SDI can be considered an indicator of potential soil microbial activity on a scale of 0.0 (low) to 1.0 (high).

In this study, Kathy Dice investigated soil health from a range of annual and perennial plant production sites on her agroforestry farm in southeast Iowa by measuring the decomposition of green and black tea buried at those sites. Green tea represented high-quality litter (C:N=12) and black tea represented low-quality litter (C:N=38). Using commercially available tea bags to measure soil microbial activity (decomposition) and calculate an SDI presents a low-cost method for assessing soil health compared to expensive lab test. Studies in Europe originally used rooibos tea (made from tea bark) as the low-quality litter but due to the lack of rooibos tea in nylon bags in the United States, black tea was substituted under the advice of Dr. McDaniel. 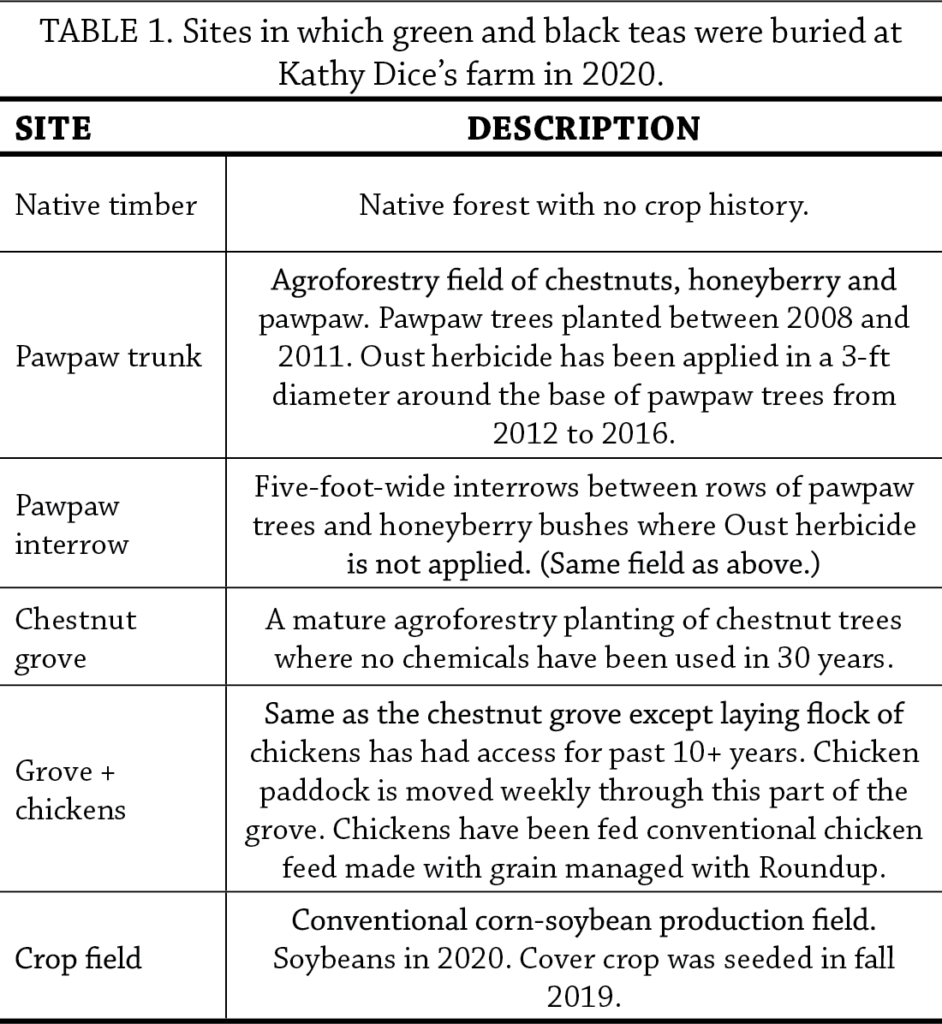 Dice used Pure Leaf brand green and black teas which come packaged in tetrahedron-shaped nylon mesh bags (mesh size 0.25 mm). In each of the six sites, Dice buried four pairs of green and black tea bags to a depth of 4 in. on May 27, 2020. Dice retrieved all tea bags from the sites on June 7, cleaned them of debris and dried them in a food dehydrator until they reached a constant mass before recording the dry mass of each bag. Dice used a digital scale capable of 0.01-gram accuracy to record dry mass. Mass loss of each bag was calculated by subtracting the post-burial dry mass from the initial mass (recorded prior to burial). Tea bags were retrieved 11 days after being buried to avoid infiltration by plant roots; this had been a problem the previous year and in some of Dr. McDaniel’s previous experiments. 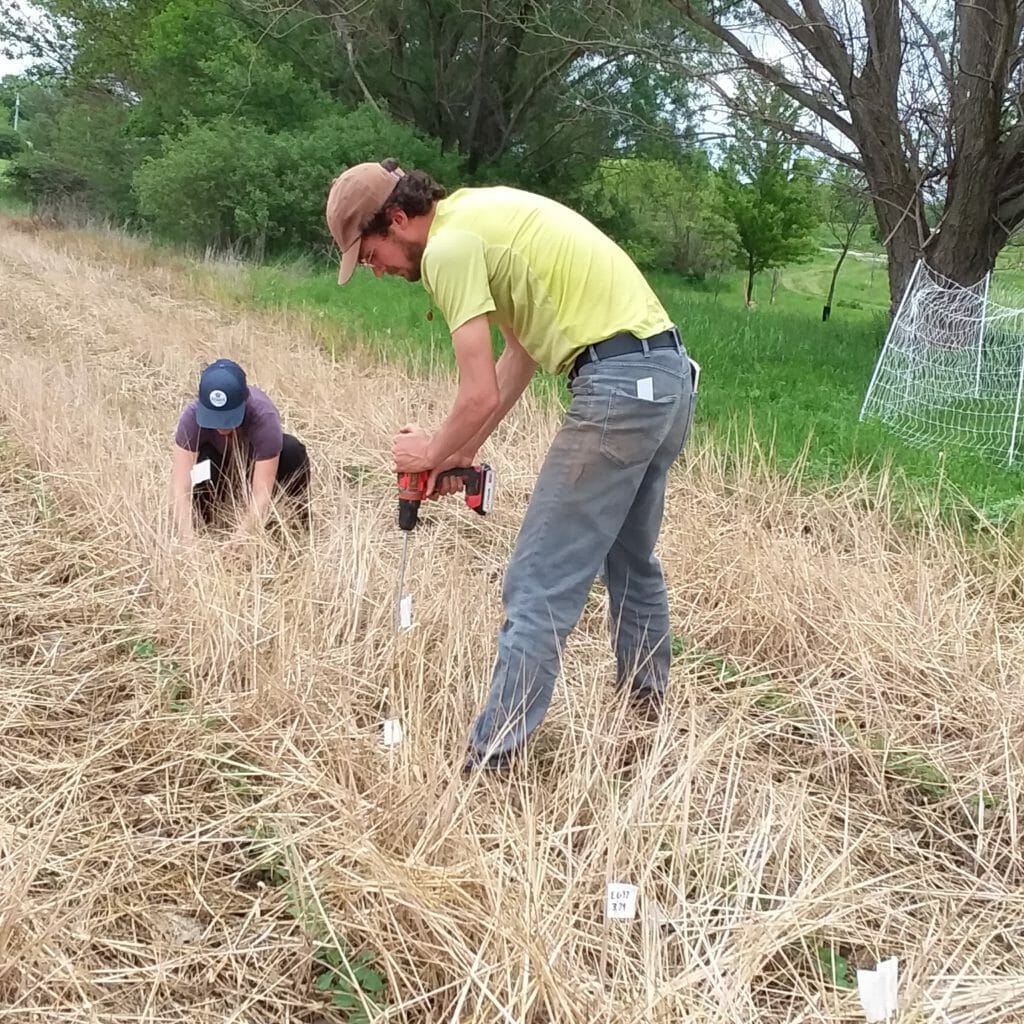 To evaluate any soil health differences among the sites, we calculated Tukey’s least significant difference (LSD) at the 90% confidence for each metric: mass loss of green tea; mass loss of black tea; SDI. For each metric, if the average difference between any two sites was greater than the LSD, we would expect such a difference to occur 9 times out of 10 under the same conditions – we refer to this as a statistically significant effect of site on that metric. On the other hand, if the average difference between any two sites was less than the LSD, we considered the results statistically similar. We could make these statistical calculations because Dice buried multiple replicates (n=4) of the green and black tea bag pairs in each site. 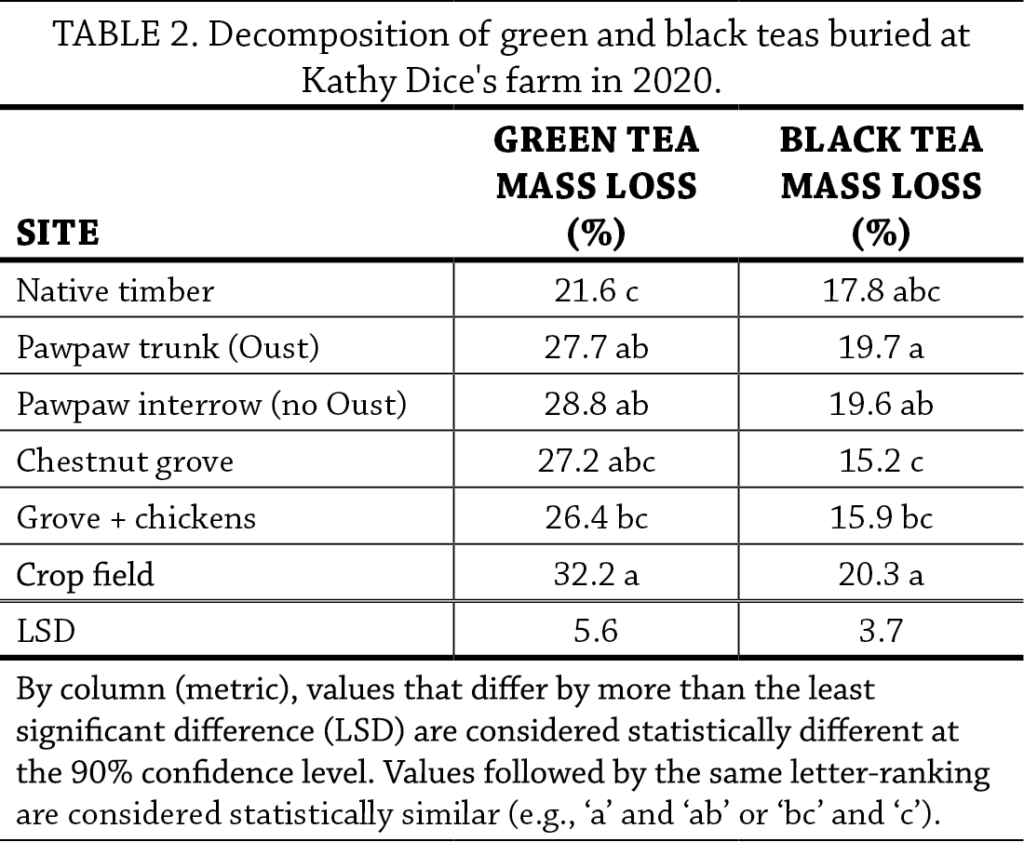 Mass loss of tea is due to decomposition by soil microbes. As such, we assumed mass loss of tea to be directly related to the amount of microbial activity in the soil – the more mass loss, the more soil microbial activity. Differences in mass loss of teas among the sites could be attributed to management but also due to soil type (i.e., texture or landscape position)[7] or temperature and moisture conditions. It is probably safe to say that the exposed soil in the crop field (soybeans) was warmer than the soil under the tree canopies in the native timber and agroforestry sites in late May/early June; and also safe to assume that moisture was not limiting given the sites experienced the same rainfall (approximately 1 in. observed during the 11-day burial period at the nearby Columbus Junction weather station[8]). Because soil microbial activity is governed by soil temperature, this may one reason the crop field (though a monocrop annual production system) saw the most mass loss of both teas among all sites.

The SDI is an indicator of potential soil microbial activity and is evaluated on a scale from 0.0 (low) to 1.0 (high). In a sense, when we calculate this index we are asking: “How well are the microbes in a particular soil operating relative to their maximum potential?” The SDI was calculated from the decomposition rates of green (high-quality litter) and black (low-quality litter) tea buried in the soil (Table 2). Decomposition rates of green and black teas in a particular soil are subject to the same temperature and moisture conditions which govern microbial activity. Though soil temperature and moisture can differ among sites, the SDI presents the opportunity to make climate-independent comparisons of potential microbial activity among sites.

This was the third year that Dice used tea bags to assess soil health on her farm and the second year of reporting results.[9] In particular, she wanted to know if the Oust herbicide used with the pawpaws or the chickens fed conventional grain have affected the soil in those agroforestry fields. Dice was pleased to see that neither is having an adverse effect based on the decomposition rates of green and black teas buried in the soil for 11 days.

This year we included in the study the calculation of the SDI (soil decomposition index) that is being pioneered by Dr. Marshall McDaniel at ISU. The SDI, when calculated from the decomposition rates of commercially available green and black teas, may be appealing to farmers because it is designed to be an inexpensive, do-it-yourself way to assess soil health compared to many lab methods. 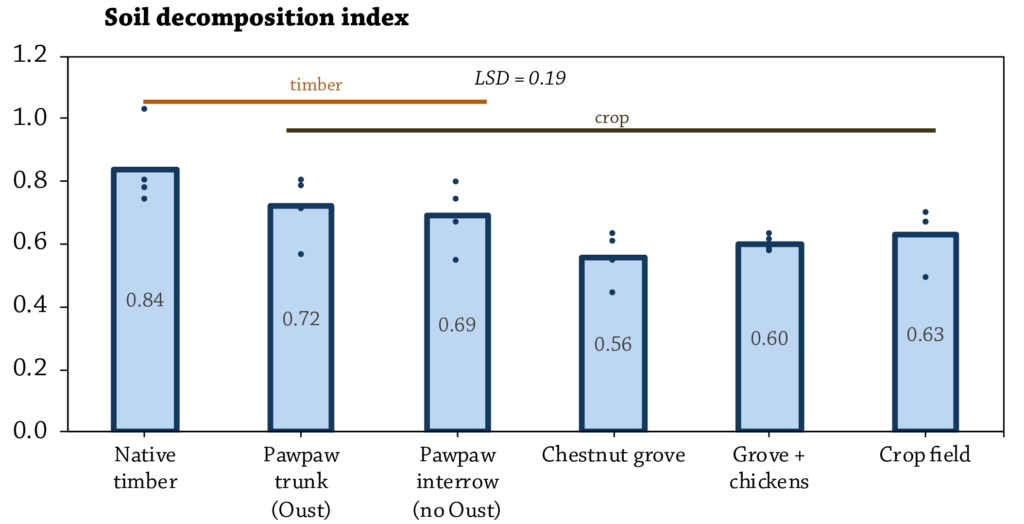