Effects of Apple Cider Vinegar in Dairy Cattle: Does milk yield and quality benefit from this health supplement?

This project was funded by Organic Valley

Why is this important?

Kevin Dietzel used a dosimeter to administer ACV in cow’s drinking water at a rate of 4 ounces per cow per day.

Apple cider vinegar (ACV) is an acidic fermentation product which has seen increased interest recently as a healthful supplement for both humans and animals, including dairy cattle. It is mostly made up of acetic acid, along with trace amounts of vitamins, mineral salts, some amino acids, polyphenols, and other organic compounds.[1] The benefits of ACV are often seen as “folk wisdom”, therefore limited research on studies have been conducted on its effects.[2] When fed to livestock, farmers claim it aids in fiber digestion, increases milk production and acts as a dewormer, among other benefits. In this project, three dairy farmers sought to observe any response of milk yield and quality resulting from supplementing cows with ACV.

Who participated and what did they do?

Over two years, Francis Blake, Kevin Dietzel and Scott Wedemeier administered dairy cattle with raw, organic ACV at the rate of 4 oz/cow/day and administered via feed or water. Farmers fed ACV in three-month increments, followed by three-months of not feeding it. They repeated this on-off cycle eight times. The trial was set up to feed ACV in opposite seasons each year in an attempt to account for seasonal variability shown in Table 1.

In an ideal research setup, half of the herd would receive ACV and the other half would not at the same time, and the milk would be analyzed separately. Because splitting the herd and keeping milk separate was not possible, the farmers tried the three-month increment method. Because of the limitations imposed by the realities of a working dairy, results of this trial could not be analyzed statistically, but the farmers learned from their experiences and observations nonetheless. 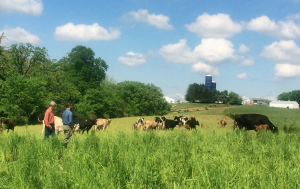 “Everything is so seasonal; it’s hard to pinpoint when a product is helping or isn’t,” said Francis Blake shown here (left) with his milk herd.

What did they observe?

After two years of observation, the farmers saw little difference in yield, butterfat, protein, somatic cell count or milk urea nitrogen in the milk of cows fed ACV or not fed ACV (Table 2). Wedemeier found it interesting that at his farm when the herd was administered ACV, the cows produced 87 lb of milk per cow per day versus 78 lb when ACV was not offered. The 9 lb difference is difficult to parse out, though, because we were not able to perform statistical analysis of the results and because grazing dairies are heavily influenced by season, weather and forage variability.

In addition to total yield, butterfat and protein are important components of milk, and dairy farmers are paid more for milk with higher butterfat and protein content. Generally, milk contains 3% to 4% butterfat and 3.5% protein. For each of the farmers in the study, ACV seemed to have a negligible effect on the amount of butterfat and protein in the milk. And though it did not notably boost butterfat and protein, ACV did not adversely affect those milk components either. For Wedemeier, the ACV also resulted in some cost-savings. “When we were feeding vinegar, we removed an expensive yeast product that promotes the digestion of fiber from the ration,” Wedemeier said. “We were expecting butterfat depression from that, but didn’t see as much irregularity as we expected. We saved money doing that.”

What did we learn?

Although we could not make statistical interpretations of the results of this trial, farmers made several anecdotal observations. Wedemeier noted he never dealt with cows “going off feed” – cows that stopped eating – during ACV feeding periods. “I think the apple cider vinegar promotes the right bacteria in the digestive system and helps to keep bad bacteria, like E. coli, from proliferating.” This trial has Wedemeier wondering if ACV would help with cows’ transition from their dry period – just before calving – to lactation.

Blake saw no real differences in milk production or animal appearance. “Everything is so seasonal; it’s hard to pinpoint when a product is helping or isn’t,” he said. Even so, he still thinks it’s a good idea to keep feeding his cows ACV, even though the benefits are hard to measure.

Dietzel wonders if increasing the rate from 4 oz/day – or adding it to feed instead of water – would have reaped a benefit. Dietzel does not plan to continue feeding ACV to his cows based on his experiences during the trial. “I don’t spend money unless there is a very good reason to, and so far, the benefits seem marginal,” he said. The participating farmers are pleased they saw no negative effects from feeding ACV, but have to decide if administering it is worth the cost of $5.40 per gallon.

Grazing cattle supplemented with apple cider vinegar (ACV) mixed in with their feed.