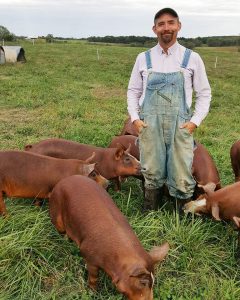 John Arbuckle with his Hereford/Hampshire crosses on pasture.

Pigs are monogastric livestock that primarily consume grain, yet will also consume and gain weight from forage. Consumer preferences and demands are shifting towards grass- and pasture-based meats, due to perceived benefits for the environment, human health, and local economies. Pigs cannot survive solely on forages, but according to estimates, pasture can replace up to 50% of the diet in gestating sows and 30% of a finishing diet. [1,2] Increasing forage consumption can elevate the amount of “healthy” fats in meat animals.[3,4] Healthy fats are unsaturated fatty acids (UFAs), which include omega-3 fatty acids, and are known to aid in the prevention of cardiovascular and autoimmune diseases.[5]

Objective: Evaluate how grain- and forage-based diets influence the fatty acid profiles of pasture-raised pork. Farmer-cooperator, John Arbuckle was interested in assessing how rations with different grain quantities affect fat composition in pastured-pork. “An important component of this research was to see the potential nutritional benefits to human health by increasing the clovers, legumes and grasses pigs consumed,” Arbuckle said of his motivation to conduct this study.

This demonstration study was conducted by John and Holly Arbuckle, Singing Prairie Farm, in La Plata, MO from May 2017 to May 2018. Since then, the Arbuckles have moved their farm and family to Newcastle, ME. The Arbuckles raise 150 pigs a year for direct markets and their value-added snack product, Roam Sticks. Inspired by Joel Salatin’s “salad bar beef” philosophy where cows are offered multiple fresh greens to graze every day, the Arbuckles implemented similar grazing practices for pigs and coined the term “salad-bar pork” with Salatin’s permission.

The grain-free pigs were supplemented with organic milk powder to help meet lysine and energy requirements. The grain fed to the 50% and 100% grain groups consisted of non-GMO corn and soybean-based rations. Forages consisted of orchard grass, timothy grass, red clover, pearl millet, and cowpeas. The pigs in the grain-free and 50% grain groups were moved every 24 hours to provide access to fresh forage, while the 100% grain group was rotated every seven days to access fresh pasture.

Boneless center cut pork chops were sent to the Clemson University Meat Science Lab (Clemson, SC) for analysis. Eighteen loin pork chop samples from the three groups – seven from the grain-free group, seven from the 50% grain group and four from the 100% grain group – were sent for analysis. Samples were analyzed for concentrations of total lipid (fat) and fatty acids as well as a fatty acid profile: concentrations of saturated fat, monounsaturated fat and polyunsaturated fats (omega-6 and -3 fatty acids).

For comparison, Arbuckle purchased two pork chops from a local grocery store. “The store-bought pork was purchased to provide a sample representative of conventional pork to compare our pastured-based, “Arbuckle said. Only the treatment group means were reported from the lab, which precluded statistical analysis of the results. As such, only general comparisons of the numerical differences among treatment group means were made and are discussed below. 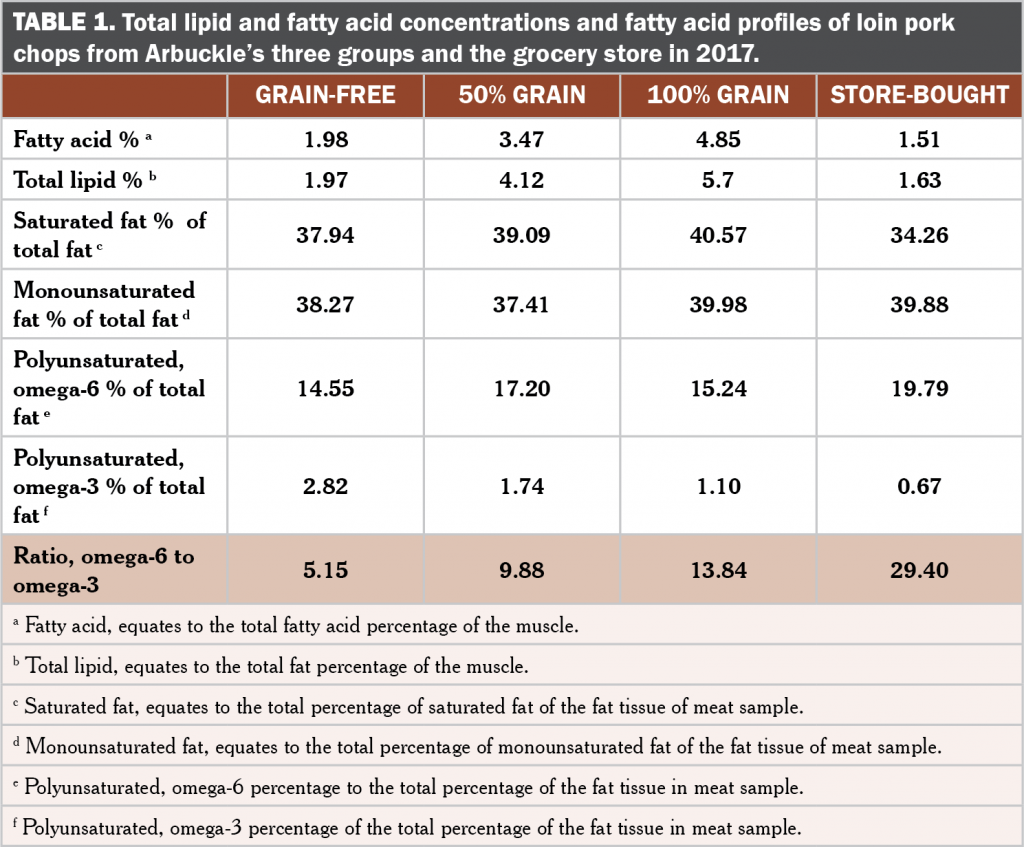 Compared to Arbuckle’s three treatment groups and the other pasture-based farms, the store-bought pork scored a much higher (less desirable) omega-6:3 ratio of 29.40. Greater omega-6:3 ratios result from the high content of polyunsaturated omega-6 fatty acid of cereal grain-based diets.[6–8] Pigs in the U.S. and Canada are typically fed diets based on corn or small grains. In a study conducted by South Dakota State University, finishing pigs with a corn/soybean-based ration resulted pork with an omega-6:3 ratio of about 14.[9]

Average daily gain (ADG) and average live harvest weights are shown in Table 2. The 100% grain group gained the fastest with an AGD of 1.16. The 50% grain group was fed roughly half as much grain as the 100% group (Table 3) along with large quantities of forages and achieved an ADG of 0.94. The ADG was lowest for the grain-free pigs at 0.90. The grain-free pigs consumed various forages and did consume minimal amounts of immature field peas towards the end of the spring grazing season.

The feed costs (Table 3) for the grain-free group include seeding for the pasture and fat-free milk powder for the pigs to meet lysine requirements. Because lysine is the first limiting amino acid in swine diet – and because of the low lysine content in forages – supplemental milk powder was offered to meet lysine requirements. Arbuckle chose to feed fat-free milk powder because it was cheaper, easier to handle and has a longer shelf life than full-fat milk powder. In Arbuckle’s opinion, the grain-free group represented the most radical departure from modern pig farming. At a rate of one pint per pig, milk powder was supplemented through the water twice a day. In total, supplementing milk powder cost $188 per pig, making the grain-free pigs the most expensive to raise with a total feed cost of $273.05. Dividing the total feed cost ($273.05) by the average live weight (212.22 lb) equals $1.27/lb, the feed cost per pound of gain for the grain-free pigs. 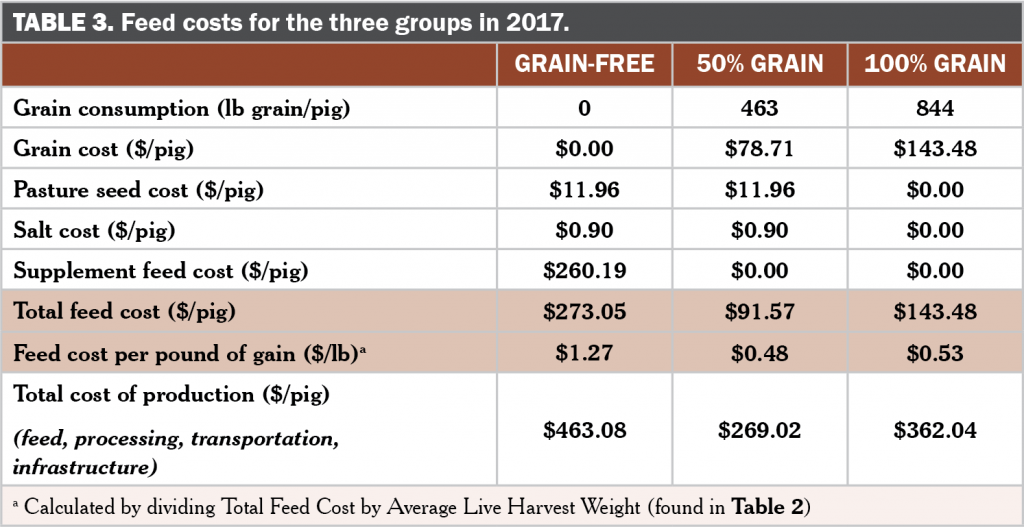 This demonstration trial showed how the amount of grain fed can affect fatty acid concentration in pasture-raised pork. Pigs raised on pasture with no grain produced the lowest omega-6:3 fatty acid ratio. This group was by far the most expensive group to feed, though, due to the need for supplemental feed (milk powder) in order to meet the pigs’ amino acid nutritional needs. The 50% reduced grain group resulted as the most economical to feed and produce across the three groups. “The 50% reduced grain group hits the sweet spot for farmers trying to reduce the amount of grain fed and overall feed costs, while justifying a higher price point for pork,” Arbuckle said of the results. Though the 50% grain group did not result in the lowest (best) omega-6:3 ratio among the three groups of pigs, the resulting ratio (9.33) was roughly one-third that of the pork chop sourced from the grocery store (29.40) (Table 1).

John and Holly Arbuckle’s mission is to, “fill the countryside with ecologically-sensitive, pasture-based family farmers.” The increasing awareness of the need for human diets with lower omega-6:3 ratios was a major driver for the Arbuckles to conduct this study. For the Arbuckles, this project builds upon their mission to raise pastured pigs, and investigate how pastured pigs on different feed systems could meet ideal market performance. John added, “This project was undertaken to evaluate the feasibility of three different feed management systems. We hope that farmers who read this study will have a greater understanding of what can happen when you lower the amount of grain in pig rations.”