Since 2013, PFI member Dick Sloan has played with an expanded three-year rotation of winter small grains between soybean and corn. Among the small grains he grows are winter wheat and cereal rye, which he harvests and then plants as cover crops. The summer harvest of winter small grains provides a window of opportunity to grow soil nitrogen ahead of corn by means of establishing a green manure. Sloan has experimented with different interseeded clover mixes as well as summer-seeded winterkill mixes. Previous on-farm research conducted by himself and Wade Dooley showed that cereal rye followed by clover mixes led to greater corn yields and return on investments compared to following cereal rye with cloverless mixes.[1,2] However, while Sloan asserts “it’s hard to beat a medium red and alsike clover blend interseeded to established winter small grains,” he notes that “no-tilling corn into clover that has just been terminated doesn’t work well.”

In an effort to fine-tune his clover management program, Sloan wanted to see if terminating clover in the fall rather than spring might facilitate easier corn planting. Additionally, Sloan wondered if reserving clover skip zones into which a winterkill green manure and then corn could be planted would also help.

The objective of this trial was to determine the most profitable and sustainable green manure system to follow Sloan’s winter wheat crop. Sloan’s original intent was to compare fall-terminated red/alsike clover and spring-terminated red/alsike clover with a summer-seeded winterkill green manure mix; however, short on time to terminate clover in the fall, he terminated both clover treatments in the spring and compared the following treatments instead:

Sloan established treatment strips on April 9, 2019, by interseeding a 60/40 blend of red and alsike clover into 30-ft-wide strips of winter wheat that were pre-assigned the clover-glyphosate or clover-Gramoxone treatment (Figure A1). Sloan drilled the clover blend in those treatments in 7.5-in. rows at a rate of 7.2 lb/ac in 7.5 in. rows, leaving skip zones on 30-in. centers for a winterkill cover crop and then corn. Strips assigned the mix-winterkill treatment remained untouched at this point and consisted only of winter wheat.

On July 22, 2019, Sloan harvested wheat from all treatments. He then mowed the clover in both clover treatments. 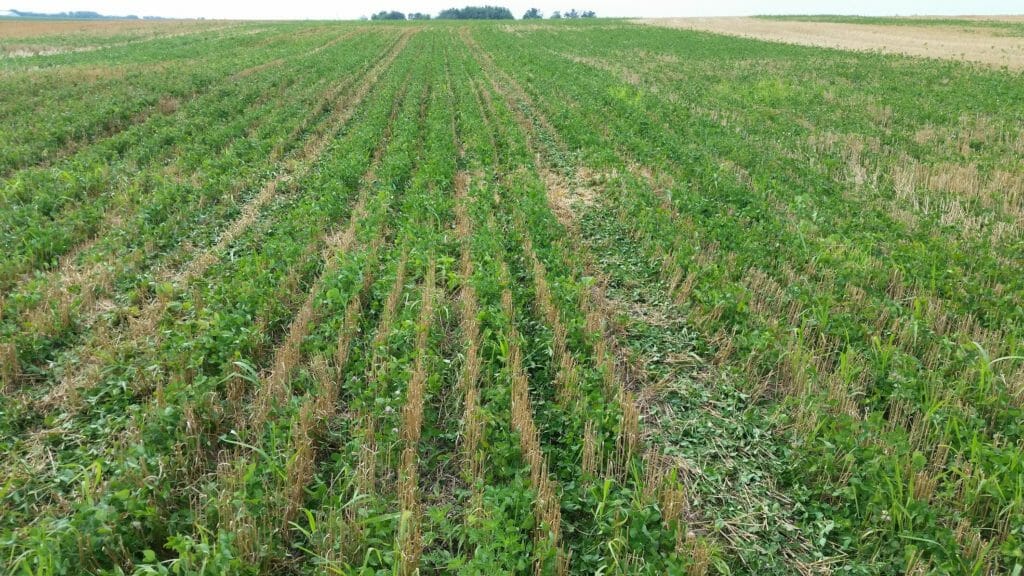 On April 7, 2020, Sloan fertilized all strips with 11 lb N/ac, 52 lb P/ac and 90 lb K/ac. Nearly 1 month later, on May 2, he terminated the red and alsike clover green manures. For the clover-glyphosate treatment, Sloan used a tank mix of Roundup Powermax (2 pt/ac), atrazine (1 lb/ac) and Sterling Blue (1 pt/ac). For the clover-Gramoxone treatment, Sloan applied a tank mix of Gramoxone (3 pt/ac), atrazine 90DF (1 lb/ac) and Sterling Blue (1 pt/ac). After observing volunteer winter wheat and some clover in the mix-winterkill treatment strips, Sloan sprayed the mix-winterkill strips on May 2 using the same tank mix as the clover-Gramoxone treatment. 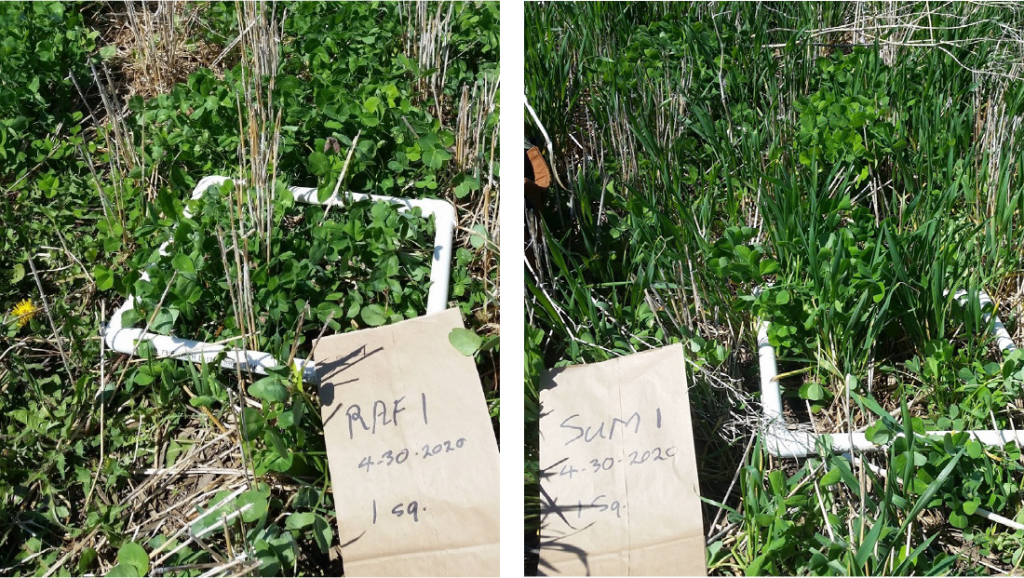 Sloan applied starter fertilizer and planted corn in all treatments on May 9 – one week after terminating the green manures and volunteer winter wheat. Corn was planted in 30-in. rows at a population of 35,000 seeds/ac. The starter fertilizer provided 32 lb N/ac, 18 lb P/ac, 5 lb K/ac and 15 lb S/ac from a tank mix of Optistart5, UAN(32) and thiosulfate (18 gal/ac).

Sloan arranged treatments randomly in neighboring strips and replicated each treatment three times for a total of nine strips (Figure A1). This treatment arrangement allowed us to conduct statistical analyses to assess the effects of each green manure system on cover crop biomass, soil and stalk nitrate and corn yield. Treatment strips measured 30 ft wide by 790 ft long.

Sloan collected aboveground cover crop biomass samples in all treatment strips on Oct. 13, 2019, and on April 30, 2020. He submitted fall 2019 biomass samples to Midwest Laboratories (Omaha, NE) to test for carbon and nitrogen and to determine the total weight of dry biomass. For the spring 2020 samples, he recorded only the weight of the biomass after air drying.

Sloan sampled for late-spring soil nitrate testing on June 8, 2020 – one month after planting corn. He collected several soil cores to a 6-in. depth in each strip and submitted samples to Ag Source Laboratories (Ellsworth, IA) to determine differences in soil nitrate availability to corn. On Oct. 4, Sloan sampled corn stalks for stalk nitrate testing.

To compare the effects of each green manure system on cover crop biomass, nitrogen availability and corn yield, we calculated the averages for each treatment then used Tukey’s tests to compute least significant differences (LSDs) at the 90% confidence level. The difference between two averages is compared with the corresponding LSD to determine if one treatment’s effect is significantly different from the other’s effect. Differences greater than or equal to the LSD indicate the presence of a statistically significant treatment effect, meaning one treatment outperformed the other and Sloan can expect the same effects to occur 90 out of 100 times under the same conditions. A difference that is less than the LSD indicates the difference is not statistically significant and the treatment had no effect.

At the time of sampling fall biomass, the red and alsike clovers in the clover-Gramoxone and clover-glyphosate treatments had been growing for six months while the summer mix in the mix-winterkill treatment had only grown for two months. For this reason, it is unsurprising that total biomass was greatest for both clover treatments.

Although green manure biomass in spring 2020 was statistically similar across treatments (Table 1), these results are a bit misleading. Sloan expected the green manure in the mix-winterkill treatment to winterkill and therefore hypothesized it would generate less total spring biomass than the clover treatments. At the time of sampling, Sloan observed that biomass in the clover treatments consisted only of clover while biomass in the mix-winterkill treatment consisted mostly of volunteer winter wheat with some clover.

Soil nitrate levels were statistically similar across treatments; however, great variation among samples within a given treatment makes it difficult to rely on these data (Table 2). 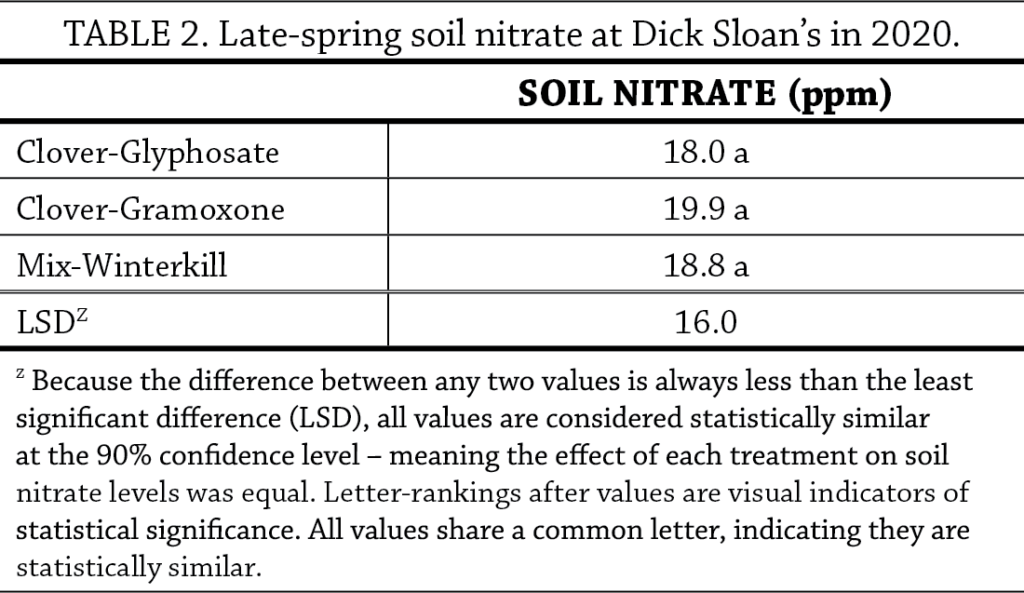 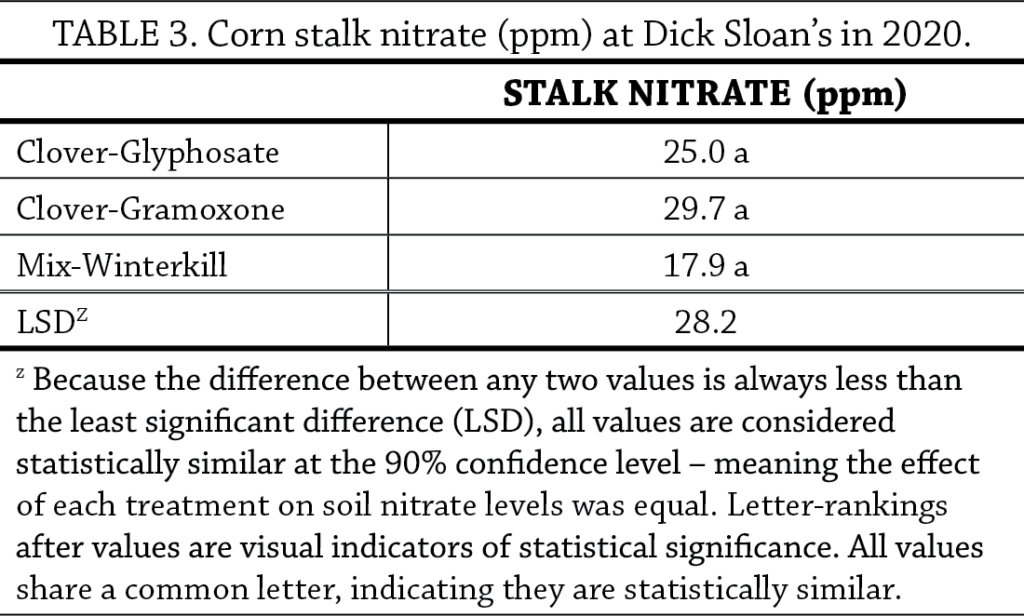 Corn in both clover treatments yielded significantly greater than corn in the mix-winterkill treatment (Figure 1). The clover treatments out-yielded the winterkill mix by roughly 30 bu/ac. Yields in all three treatments were lower than the Buchanan county average for 2020 (189 bu/ac) by more than 25 bu/ac.[4] It is worth mentioning that Sloan achieved the corn yields in this experiment with only 106 lb N/ac applied. 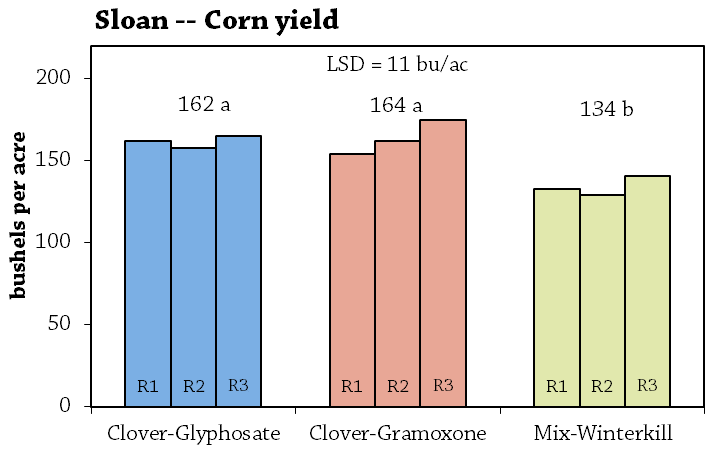 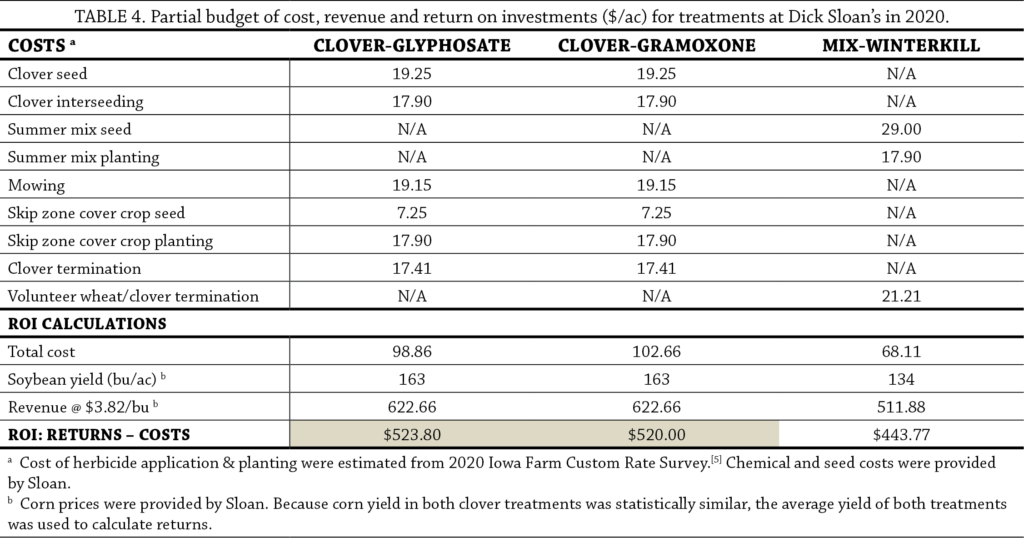 Compared to planting a diverse cover crop mix after wheat harvest and allowing it to winterkill, interseeding red and alsike clover to wheat then terminating it the subsequent spring provided Sloan with better corn yields and a better return on investment by $80/ac. Sloan commented, “I like planting a diverse mix of cover crops in the summer following small grain harvest, but it just doesn’t give the same boost to the following year’s corn yields as the clover blend does.” Although Sloan was hindered from terminating one of his clover treatments in the fall as originally planned, he was satisfied this trial backed up his observations from previous on-farm research in which interseeding red and alsike clovers to winter small grains provided good weed control.

FIGURE A1. Dick Sloan’s experimental design consists of three replications of each treatment. This design allows for statistical analysis of the data. 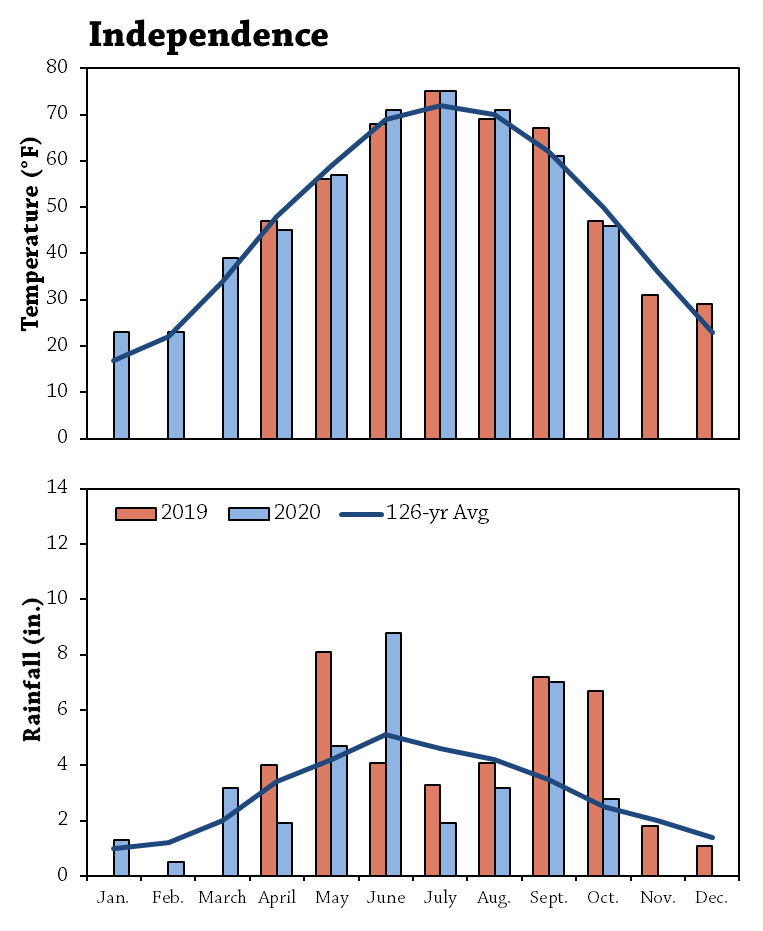 FIGURE A2. Mean monthly temperature and rainfall and the long-term averages during the trial period at Independence, the nearest weather station to Sloan’s farm (about 7 miles away).[6]