During the 2017 Summer Lettuce Variety Trial, several farmers noticed the uneven germination of the pelleted lettuce seed being used for the trial.[1] They were curious if this was because of the pelleting or because of the heat, and if there was a better way to germinate seeds for summer lettuce transplants. This project compares pelleted and unpelleted lettuce seed in a split-plot, randomized replicated design that also explores the effect of a wetted sheet on the seed trays. The lettuce variety Magenta was used, as it was the favored variety of the growers from the 2017 trial. 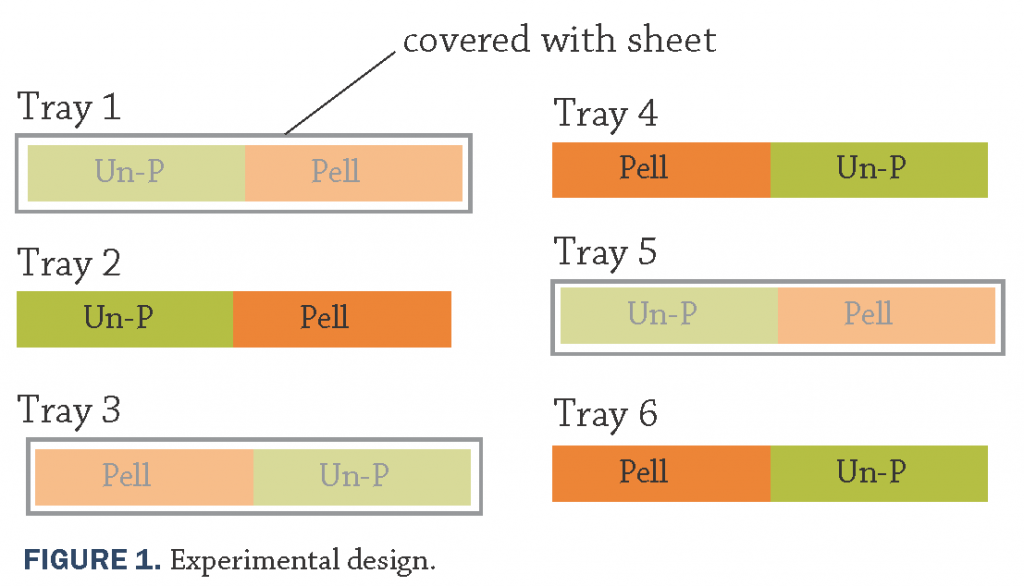 Carmen Black, who participated in the 2017 variety trial, said, “We wondered if using pelleted seed contributed to the poor germination, so this year we want to directly compare the germination of pelleted and unpelleted seed. I feel committed to growing lettuce through the hot part of the summer for both the CSA and restaurant sales, and poor germination was unexpectedly one of my biggest challenges to growing an adequate amount last summer. Having better germination will help us grow summer lettuce more efficiently and economically.” 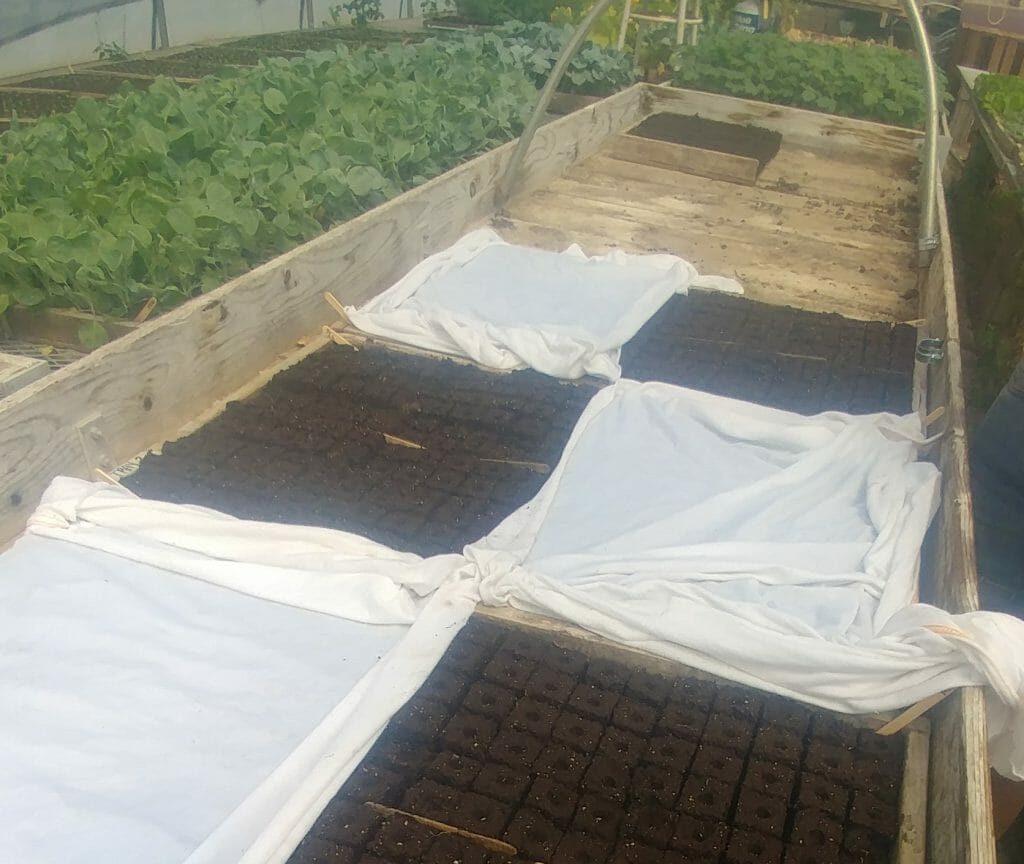 This project was conducted at three Iowa farms: Jill Beebout (Blue Gate Farm in Chariton), Carmen Black (Sundog Farm in Solon), Kate Edwards (Wild Woods Farm in Iowa City). All farmers germinated head lettuce (Magenta) in experiments using a randomized complete block design with a split-plot arrangement. At each farm, six seedling trays (main plots) were divided in half (sub-plots), with one side seeded to pelleted seeds, the other to unpelleted seeds. Three of the trays were covered with a moistened sheet during germination, the other three were left uncovered. A schematic of the trial setup is shown in Figure 1. Production practices for lettuce germination including tray types and planting media for each farm are detailed in Table 1. Seeds for the trials were provided by Johnny’s Seeds (Winslow, ME). 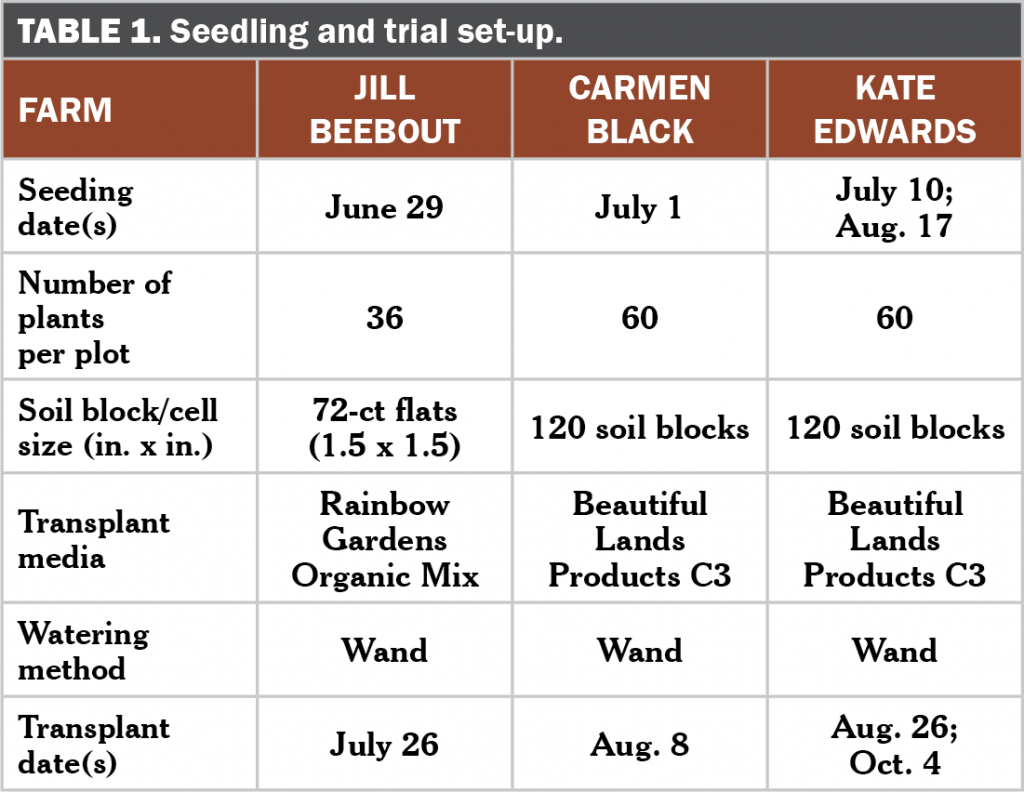 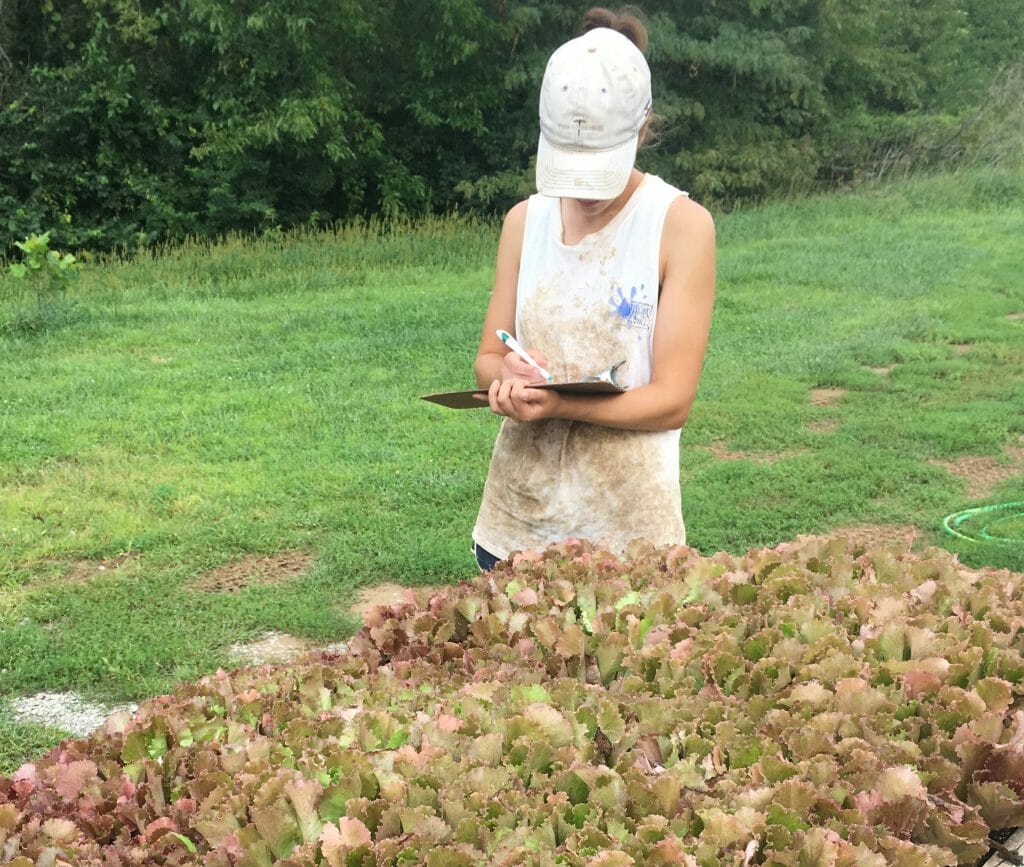 Magenta lettuce seedlings are evaluated at Kate Edwards’ farm before being transplanted to the field.

Beebout seeded flats on June 29 and measured seedlings prior to transplanting on July 26 (27 days).  Seedling quality indicators and germination rates are shown in Table 2. At transplant, seedlings from uncovered trays had statistically more leaves (6.3 leaves/seedling) than seedlings from covered trays (5.6 leaves/seedling). Though not statistically significant, uncovered trays tended to have taller and less compact seedlings than covered trays. Pelleted seeds did not show any significant difference in seedling quality from unpelleted seeds. All treatments showed very strong germination rates, ranging from 97% to 99%. 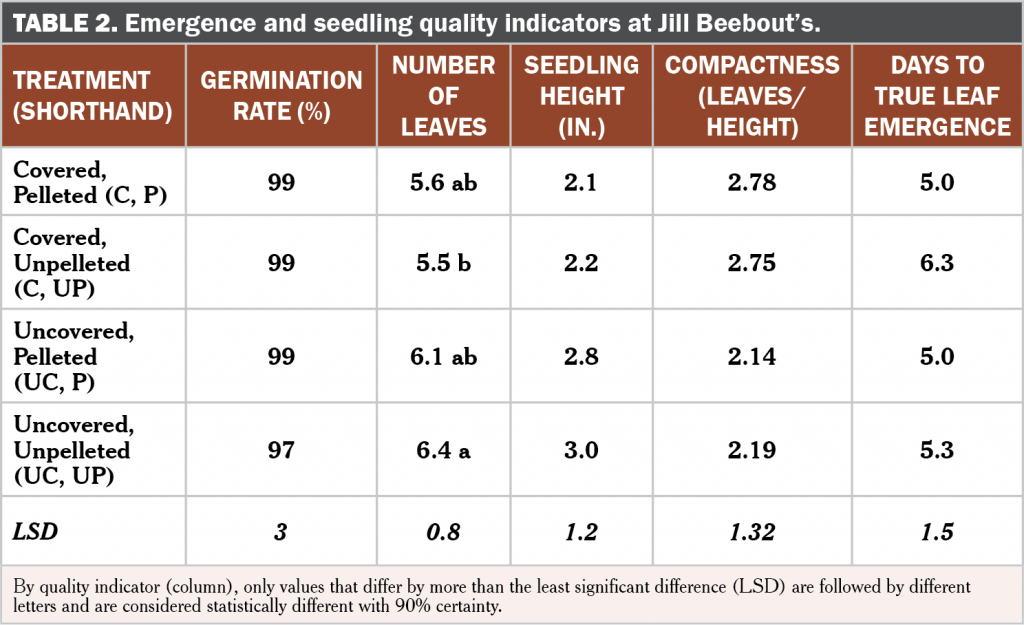 Black seeded into soil blocks on July 1 and measured seedlings prior to transplanting on Aug. 8 (38 days). Seedlings grown from unpelleted seed were more compact (1.01) than those grown from pelleted seed (0.79). Tallest seedlings resulted from the covered trays with pelleted seed. This treatment combination also produced the least number of leaves. Germination rate was similar across all treatments. Results are shown in Table 3.

Black removed the covers to evaluate germination lettuce seeds in the soil blocks on July 4. 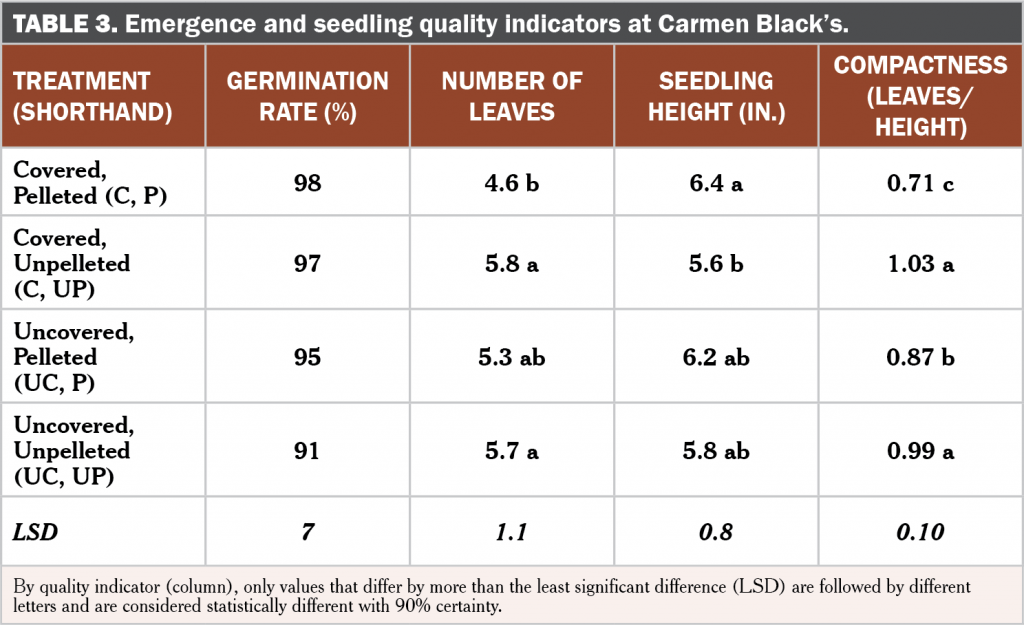 Edwards did two successions of the trial, which were seeded into soil blocks on July 10 and Aug. 17 and transplanted to the field on Aug. 26 and Oct. 4 (47 and 48 days to transplant). During succession 1, seedlings grown from covered trays had higher germination rates (98%) and more compact seedlings (1.17), as shown in Table 4. Uncovered trays produced taller seedlings, but Edwards, and most farmers, value a compact plant over tall plant, which can be leggy and struggle during transplant. Pelleting did not have an impact on seedling quality. 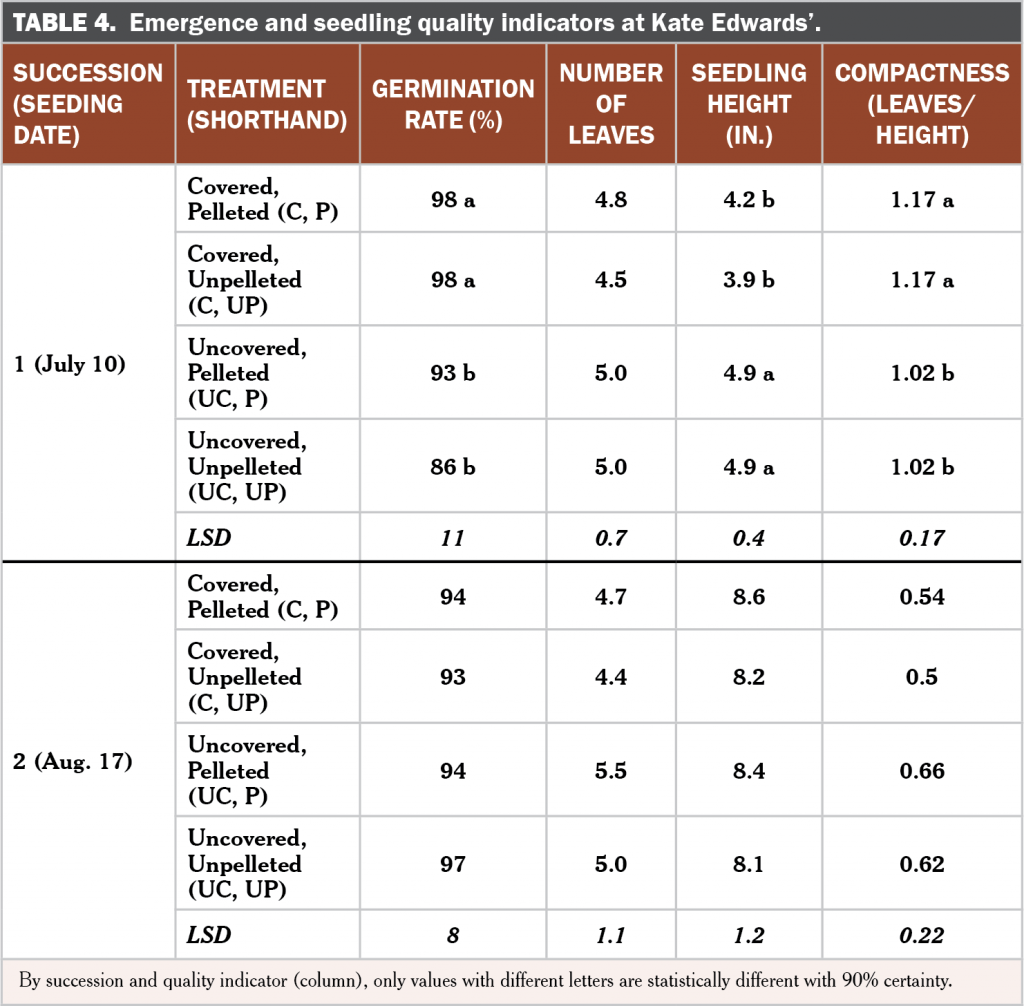 The effects of pelleting and wetted sheets covering germination trays differed by farm. While Beebout recorded slightly more leaves on uncovered trays, Edwards recorded better germination and more compact plants in covered trays during her first succession, but saw no effect of either treatment during her second succession. Black, meanwhile, saw mixed effects of the treatments, with unpelleted seed providing the most compact seedlings and more leaves per plant. Within her pelleted trays, the uncovered trays were more compact than covered trays. 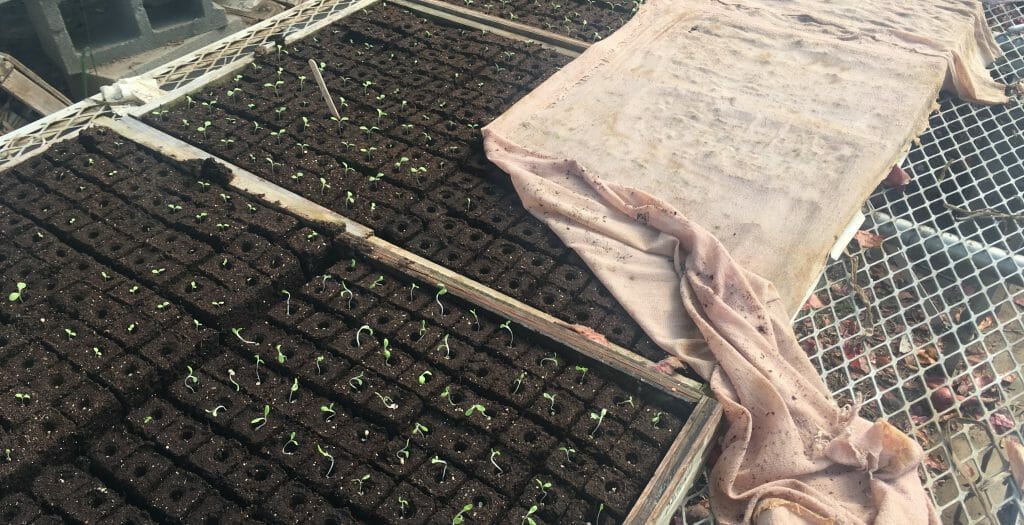 Pelleted and unpelleted seed appeared to germinate at different rates at Edwards’ farm, but pelleting did not have lasting effects on seedling quality indicators.

All farmers were interested in repeating this trial for another year after making refinements to the protocol to better capture the most extreme weather conditions for starting lettuce seed (hot, sunny). They wondered if the difference in their results was due, in part, to specific weather conditions following seeding, such as a cool, cloudy day versus a hot, sunny day. Kate Edwards said, “My main take-way from this trial is that when it gets hot, I’m going to put a wet sheet over my germination trays.” Beebout had similar conclusions: “After struggling with summer lettuce germination in the past, this trial really helped me overcome my frustration with it. I never thought I could use the high tunnel for starting summer lettuce, but this opened up some options for me.”