This project was funded by KWS and Albert Lea Seed. 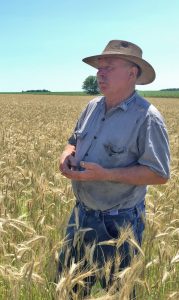 Tom Frantzen in a field of his hybrid rye harvested in July 2019 to feed pigs in his feeding trial.

Farmers in the Midwest commonly know rye as a cover crop. A small amount is grown as food grain, and an even lesser amount is grown to feed pigs. Rye is a fall-seeded and summer-harvested crop; it helps to spread the workload across the year when incorporated into corn and soybean rotations. Rye enhances water penetration and retention, reduces soil erosion and reduces weed biomass by 60 to 95%.[1] A winter cereal crop like rye also helps to break herbicide-resistant weed cycles, like ragweed and foxtail, due to direct competition during early spring emergence.[2]

Small grains (oats, wheat, barley and rye) have historically been fed across all types of pig production systems and are higher in fiber than corn. Small grains take longer to digest and have a lower energy concentration than corn. This results in pigs needing to eat more and take longer to finish than when fed a corn-based diet.[3,4] Previously, farmer-cooperators Tom and Irene Frantzen fed pigs eight different rations that included varying quantities of hybrid rye. Quantities of soybean oil were adjusted to achieve the same digestible energy (DE) as their typical corn and soybean ration.[5] The results from the prior study informed the Frantzens’ of the optimal hybrid rye ration. In the present demonstration study, the Frantzens’ conducted a feeding trial with their organic feeder pigs to further explore the value of hybrid rye as pig feed.

KWS, a German seed company, began breeding hybrid rye varieties in the 1980s. There are several different hybrid rye varieties that exist, six of which are sold in the U.S.: Bono, Brasetto Progas, Daniello, Propower, and Serafino. Varieties are being developed every year as either a grain-type hybrids or forage-type hybrid. Compared to traditional, open-pollinated varieties of rye, hybrid rye boasts a more extensive root system and requires 20% less water and 20% less fertilizer, according to Claus Nymand, KWS product manager. The Frantzens’ have been growing KWS’s Brasetto hybrid rye since 2016 and have observed it to limit ragweed infestation in their organic crop fields. “Hybrid rye is a multipurpose crop that we now have implemented in our crop rotations. It suppresses ragweed plus can be used both as livestock feed and straw as bedding. Hybrid rye is an exciting crop for our farm,” Tom shared about their motivation for this trial. The Frantzens’ were particularly interested in evaluating feed efficiency, daily gain and feed cost per pound of gain when organic feeder pigs are fed a standard corn/soy ration compared with a corn/hybrid rye/soy ration.

This trial was conducted by Tom and Irene Frantzen, Frantzen Family Farms, in New Hampton, IA from October 2018 to December 2019. The farm’s 300 acres of crops support a 30-sow farrow to finish operation and 60-head beef cow-calf herd. 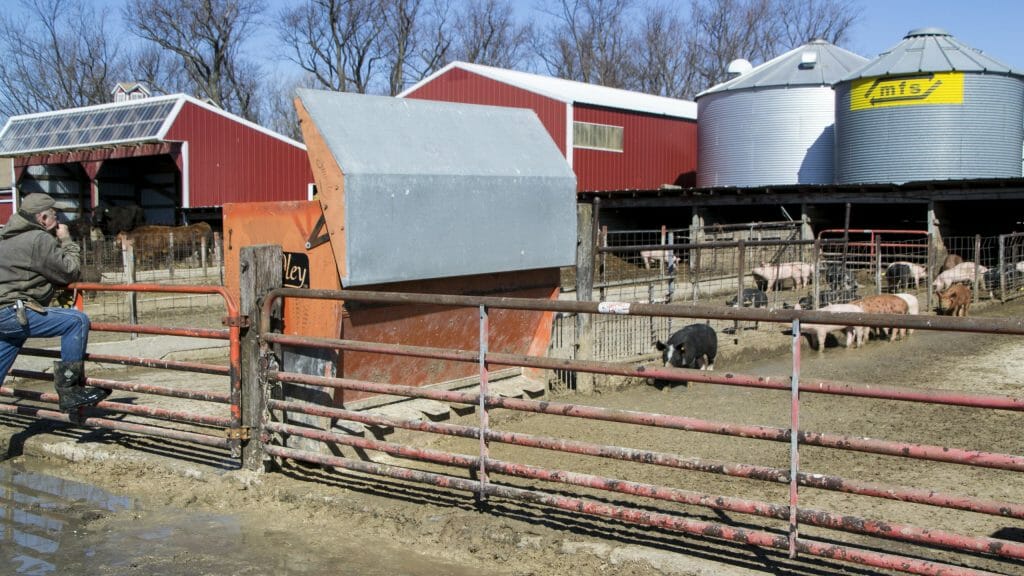 At three months of age, pigs were ear tagged and weighed then randomly assigned to either the control (corn/soy) or treatment group (corn/hybrid rye/soy) pens. The split feeder in the center allowed Tom to feed two sperate rations.

The Frantzens conducted trials over the course of three separate turns of pigs. Each turn consisted of pigs randomly assigned to groups fed two different rations: 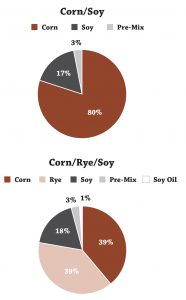 FIGURE 1. Corn/soy (control) and corn/rye/soy (treatment) rations the Frantzens fed to pigs in each turn. Soybean oil was included in the treatment ration to ensure the digestible energy (DE) content was comparable to the control ration. Pre-mix is a mixture of vitamins, minerals, and other trace elements incorporated in feed.

Pigs selected for each turn were recently weaned and were similar in size and performance. All pigs were Chester White and Duroc crossbreeds. Pigs were randomly separated into control and treatment groups and were housed in adjacent pens with access to outdoor concrete pads. An outdoor feeder shared by the pens was partitioned to separately feed the two rations. The control and treatment groups alternated pen and feeder sides with each repeated turn (Figure A1).

The Frantzens recorded pig weights at the beginning and end of each turn in both the control and treatment groups. We calculated average daily gain (ADG) as follows:

For each turn, the Frantzens recorded how much feed was fed to all pigs in either group. They considered the total amount of feed, the number of pigs and the total amount of weight gained by the entire group of pigs to determine daily feed intake and feed conversion as follows:

For the purposes of statistical analysis, we considered turns as replications (three replications of two rations in this case) (Figure A1). To evaluate any effects of ration on ADG, daily feed intake and feed conversion, we calculated the least significant difference (LSD) using a t-test. If the difference resulting from the two rations was greater than or equal to the LSD, we considered this a statistically significant effect. On the other hand, if the difference resulting from the two rations was less than the LSD, we considered the groups to be statistically similar. We used a 90% confidence level to calculate the LSDs, which means that we would expect our findings to occur 9 times out of 10.

All the pigs in the trial were Chester White and Duroc crossbreeds. The control and treatment groups alternated pen and feeder sides with each repeated turn.

Number of pigs, average start weight, average end weight, amount fed and days fed for both groups in each turn can be found in Table 1.

ADG for each turn and the mean of the three turns are shown in Figure 2. Rations had no statistical effect on ADG. 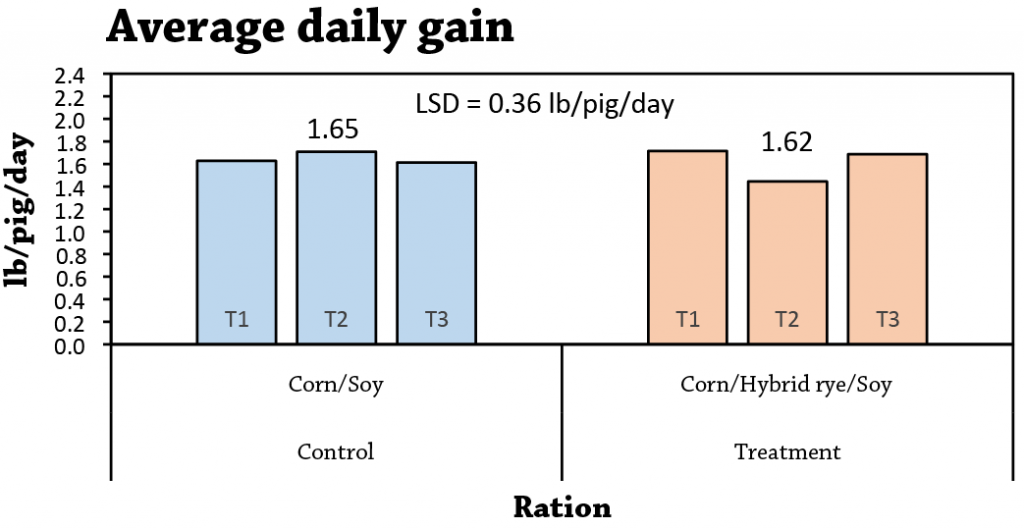 FIGURE 2. Average daily gain of pigs at the Frantzens’. Columns represent individual turn (rep) means. Above each set of columns is the overall group mean. Because the difference between the group means is less than the least significant difference (LSD), the groups are considered statistically similar at the 90% confidence level.

The Frantzens recorded the amount of feed the pigs consumed throughout each turn. The total feed offered to the group of pigs was then divided by the number of pigs and the number of days fed in that group to get an average daily feed intake per pig. On average, feed intake was statistically equal between the two groups of pigs (Figure 3).

Compared to the other turns, the Frantzens observed lower feed intake in turn 2 and this was presumably due to grains in the rations containing mycotoxins. “Because we were measuring performance and watching intake we were able to catch the low intake to realize there was an issue” shared Tom. The Frantzens submitted corn and hybrid rye samples for mycotoxin testing at Dairyland Labs in Wisconsin.

Mycotoxins are molds produced by fungi when water and air come into contact with grains. For both corn and hybrid rye, the lab results returned positive for mycotoxins, specifically vomitoxin (DON), zearalenone (ZEA), and ergot. Corn samples contained 2.3 ppm DON and 73.0 ppb ZEA; hybrid rye samples contained 1.8 ppm DON, 245.4 ppb ZEA, and 0.315 ppm from the ergot test panel. According to U.S. Pork Center of Excellence, the recommended maximum allowable concentrations of these mycotoxins in grow-finish pig diets are 1.0 ppm DON, 1.0 ppm ZEA for growing pigs and 3.0 ppm ZEA for finishing pigs, and 2.0 ppm ergot[8]. Because the Frantzens’ corn and hybrid rye samples exceeded the allowable concentration for DON, this may have limited their palatability and may explain why the Frantzens observed lower feed intake in turn 2.

To combat mycotoxins, the Frantzens began to include a feed binding agent, Biofix Plus, in both the control and treatment rations at a rate of 3 lb/ton. The binder was fed from the midway of the second turn through the end of the third turn. Looking at Figure 3, feed intake appeared to rebound in turn 3 as the toxin binder is designed to improve feed intake and weight gain. Close observation of animal performance, pig reaction to grains suspected to be infected, and testing feed samples were useful methods in detecting this problem. 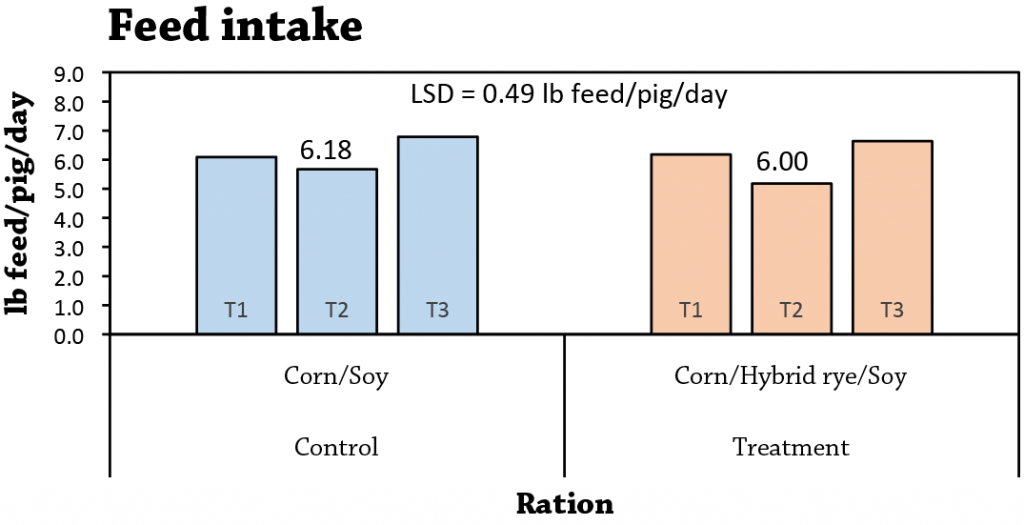 FIGURE 3. Daily feed intake of pigs at the Frantzens’. Columns represent individual turn (rep) means. Above each set of columns is the overall group mean. Because the difference between the group means is less than the least significant difference (LSD), the groups are considered statistically similar at the 90% confidence level. 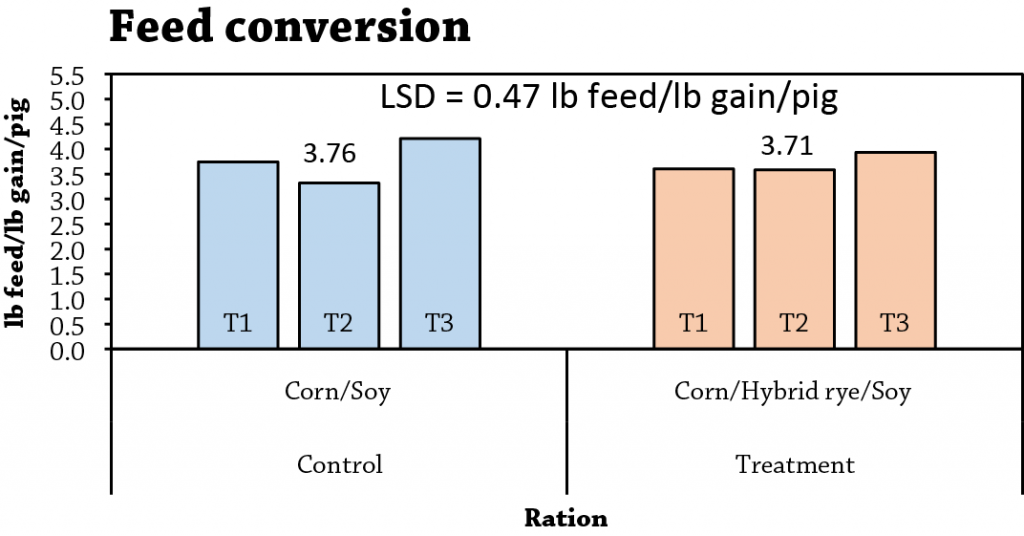 FIGURE 4. Feed conversion of pigs at the Frantzens’. Columns represent individual turn (rep) means. Above each set of columns is the overall group mean. Because the difference between the group means is less than the least significant difference (LSD), the groups are considered statistically similar at the 90% confidence level.

Total feed cost, feed cost per pig, and feed cost per pound of gain are presented in Table 2. The total feed cost was calculated by generating the cost of production per bushel for the Frantzens’ organic hybrid rye and organic corn, and then adding the cost of additional feedstuffs (i.e. soybean meal, soy oil, premix). The majority of the feedstuffs the Frantzens feed their livestock were comprised of grains from their organic row crop operation. 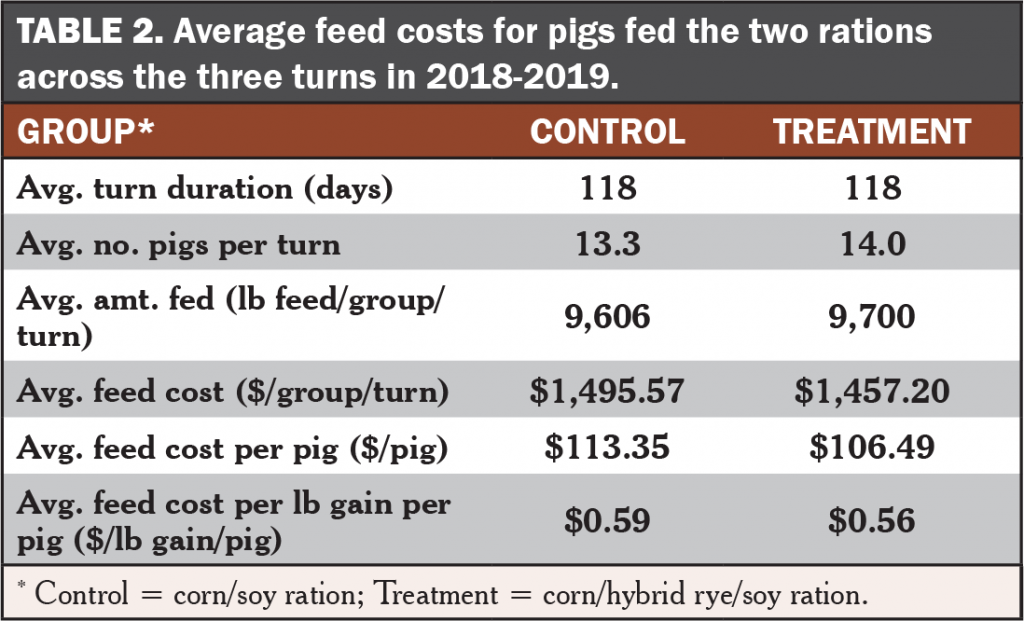 This trial demonstrated feeder pigs performed similarly when fed either a ration with corn/soy (control) or a ration with hybrid rye replacing half of the corn (treatment). On average, ADG, daily feed intake and feed conversion were statistically similar between the pigs fed the control and treatment rations. Feed cost per pound of gain was less for the pigs fed the treatment ration.

Raising hybrid rye satisfied the Frantzens’ desire to diversify the farm’s organic crop rotation in an effort to suppress weeds. Planting a winter annual crop like hybrid rye in September can disrupt lifecycles of weeds like giant ragweed that proliferate in the spring.

The Frantzens concluded the benefits of hybrid rye not only impacts their feeder pig enterprise, but their entire integrated farm operation. Hybrid rye allowed the Frantzens to extend their five-year rotation to a six-year rotation providing an additional window in their cropping sequence. After hybrid rye harvest, the Frantzens plant a diverse cover crop mix that is grazed by stocker cattle in the fall, providing approximately 30 days of grazing.

An extended crop rotation allows the Frantzens to apply manure in September, rather than April, generating a more even spread of labor through the year. “During winter we would have the stocker cows out on corn stalks and apply manure in April. Now, with hybrid rye in the rotation, we are able to adjust the majority of our labor in September rather than April,” Tom said. The Frantzens will continue to grow and feed hybrid rye to their entire farrow-to-finish pig operation.

The Frantzens hope the results of this trial help other farmers to learn that farm diversity leads to stability. “We can successfully diversify integrated livestock and crop farms, while being better stewards of the land,” said Tom. “In this trial we not only learned the value of hybrid rye as a feedstuff for feeder pigs, but we are better equipped knowing how this crop benefits our entire farming system.”

FIGURE A1. Experimental design used by the Frantzens. We considered turns as replications which allowed for statistical comparisons of the means resulting from the two rations. Control = corn/soy ration; Treatment = corn/hybrid rye/soy ration. 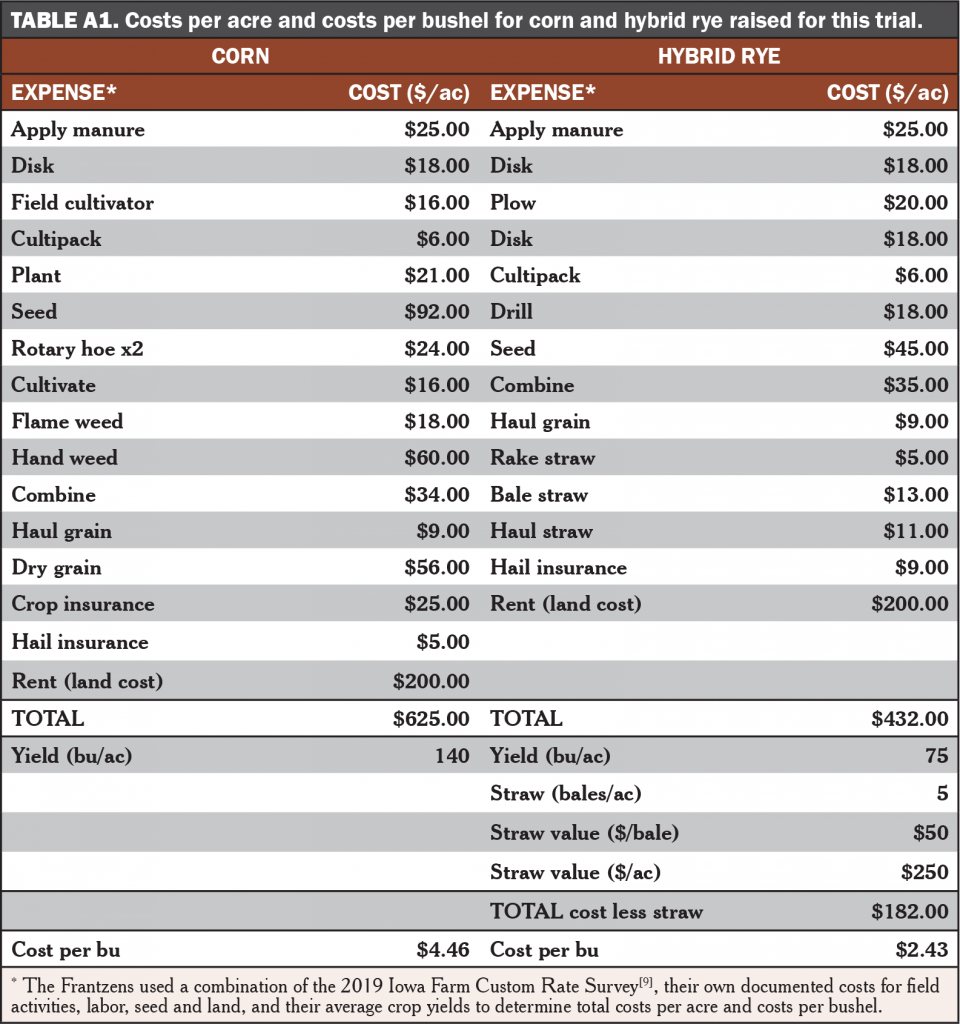