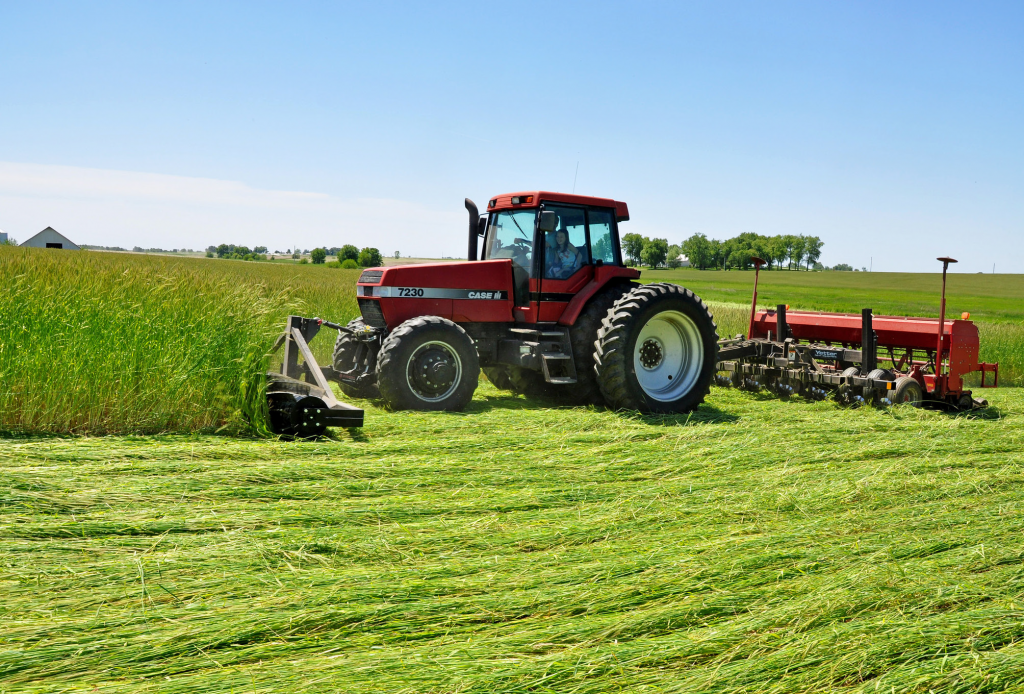 In recent years, Practical Farmers of Iowa have realized the capacity of cover crops to reduce weed pressure in soybeans. In the past two years, farmer-researchers have documented reduced herbicide use when planting soybeans into a tall, thick cereal rye cover crop that they chemically terminated near the time of soybean planting (Gailans et al., 2016). The roller-crimper, pioneered by the Rodale Institute in Kutztown, Pennsylvania, presents farmers the opportunity to mechanically terminate cover crops without chemicals or tillage. A roller-crimper is a large, metal cylinder with “chevron” pattern blades that simultaneously lays the cover crop flat on the ground and crushes the stem in several places. Research in central Illinois has found that roll-crimping a cereal rye cover crop ahead of no-till soybeans can result in similar weed control and yield to where the cover crop was chemically terminated (Davis, 2010). Successful termination of a cover crop with the roller-crimper is dependent on the cover crop being at the anthesis (flowering) stage at the time of rolling (Mirsky et al., 2009). For cereal rye, this flowering stage is likely to occur in late May in Iowa. Preliminary work in Wisconsin has shown some promise in planting soybeans into standing cereal rye first and then waiting for the cereal rye to reach flowering before roll-crimping (Silva, 2016). In true PFI fashion, farmer-cooperator Tim Sieren wanted to see if these previously researched principles could be applied to his own no-till soybean production on his farm in southeast Iowa.

The objective of this study was to determine the agronomic and economic performance of soybeans seeded prior to roll-crimping a cereal rye cover crop. To do so, Sieren compared soybean seeding dates relative to cover crop termination (before and after) as well as cover crop termination techniques (chemical vs. roll-crimp). “If I can manage a roller-crimper system in soybeans, while maintaining yields,” Sieren said, “I could drastically reduce herbicide use.” 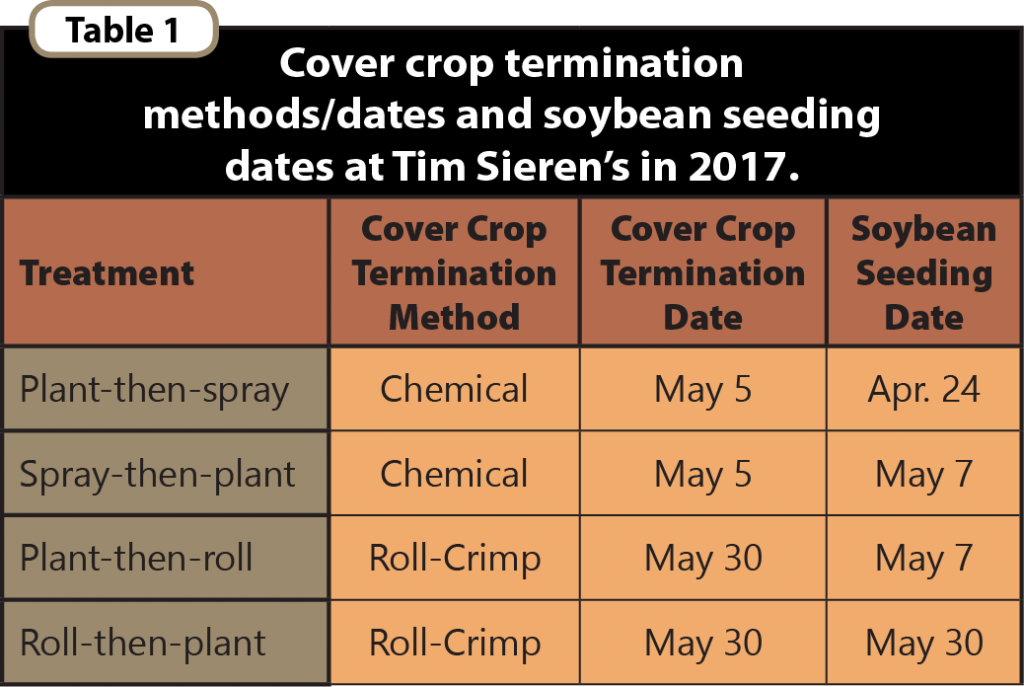 Cereal rye cover crop was broadcast and incorporated with a Bessler rolling stalk chopper to the entire field on Nov. 1, 2016 at a rate of 87 lb/ac.

Aboveground biomass of the cereal rye cover crop was sampled from each strip just prior to termination. Samples were collected from randomly placed quadrats (1 ft x 1 ft) within each strip. Replicate samples were combined, dried and weighed.

Chemical termination of the cereal rye cover crop took place on May 5, 2017. This was achieved with Glystar 5 (35 oz/ac).

Roll-crimping of the cover crop took place on May 30 after cereal rye was observed to reach anthesis (flowering). Sieren borrowed a 15-ft wide roller-crimper from neighbor and fellow PFI member Levi Lyle to accomplish this.

All strips received an application of glyphosate (44 oz/ac) and Flexstar (1 pt/ac) on June 27 to control weeds and to also completely terminate the cover crop that had continued to grow in the plant-roll and roll-plant treatments. No additional in-season weed management occurred in any strips.

Soybeans were harvested from the center 25 ft of each individual strip on Oct. 20 and corrected to 13% moisture. 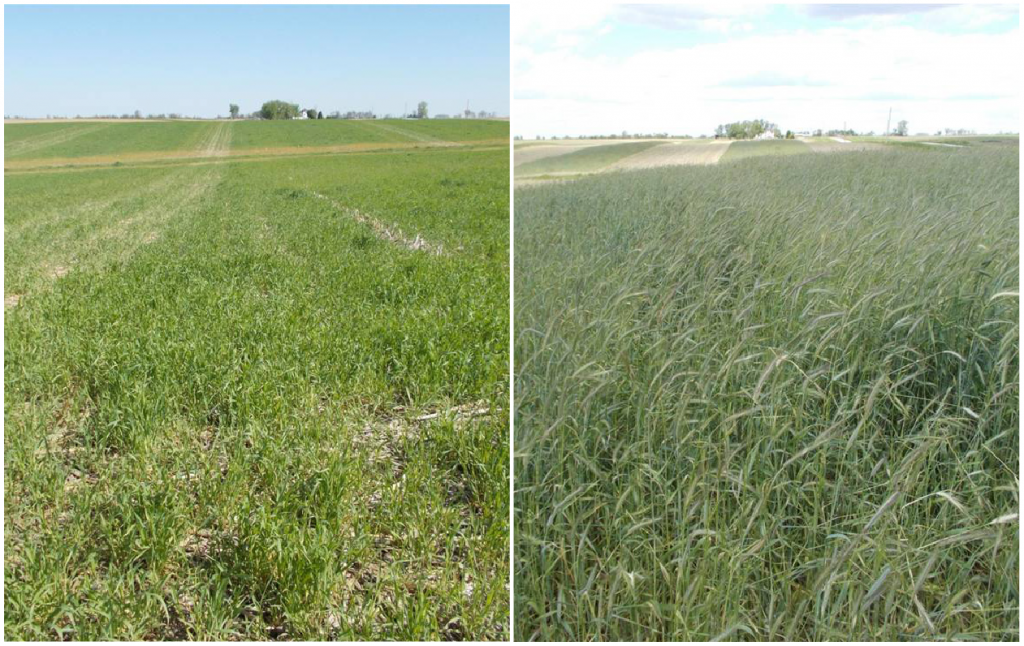 Cereal rye cover crop at Tim Sieren’s on May 4 one day prior to chemical termination
(on left) and on May 30 just prior to roll-crimping (on right). 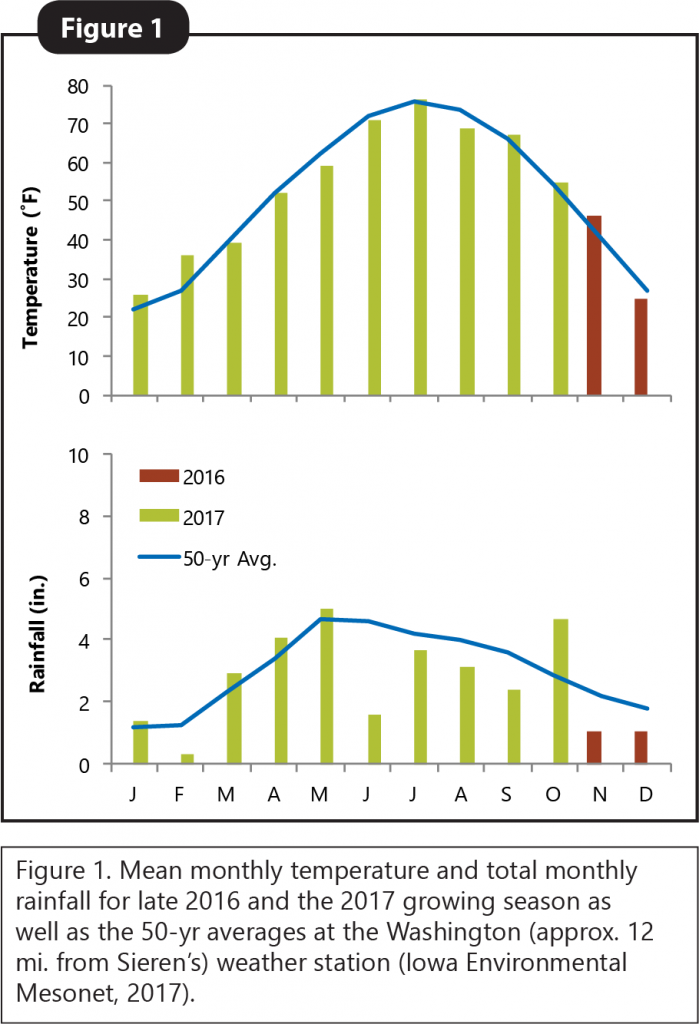 Mean monthly temperature and total monthly rainfall for the end of 2016 and the 2017 growing season near Sieren’s farm compared to the long-term averages is presented in Figure 1 (Iowa Environmental Mesonet, 2017). November and December 2016 were drier than normal, but spring 2017 saw near-normal temperatures and rainfall slightly above-average. These made for very favorable conditions for cereal rye cover crop winter survival and spring growth. During the growing season, temperatures were near the 50-yr average while rainfall was roughly 75% of the normal.

Cover crop biomass prior to termination

Sieren collected cereal rye cover crop aboveground biomass samples prior to each termination date. More than five times as much cover crop growth occurred in the treatments where the cover crop was terminated with the roller-crimper on May 30 (Table 2). Even so, Sieren noted that that amount of biomass was probably too thin to be effectively terminated by only the roller-crimper. “The rolled rye popped back up and stayed green until chemically terminated [with weeds] on June 27,” Sieren said. This was especially true where Sieren seeded the soybeans on May 7 and then roll-crimped on May 30. “The rye stand was thin from the May 7 drilling of the beans. Most of it stood back up behind the crimper because it was stressed from the drill 3 weeks earlier.” Sieren also suspected that a severe hailstorm on May 17 thinned the cereal rye cover crop stand before the roll-crimping on May 30. 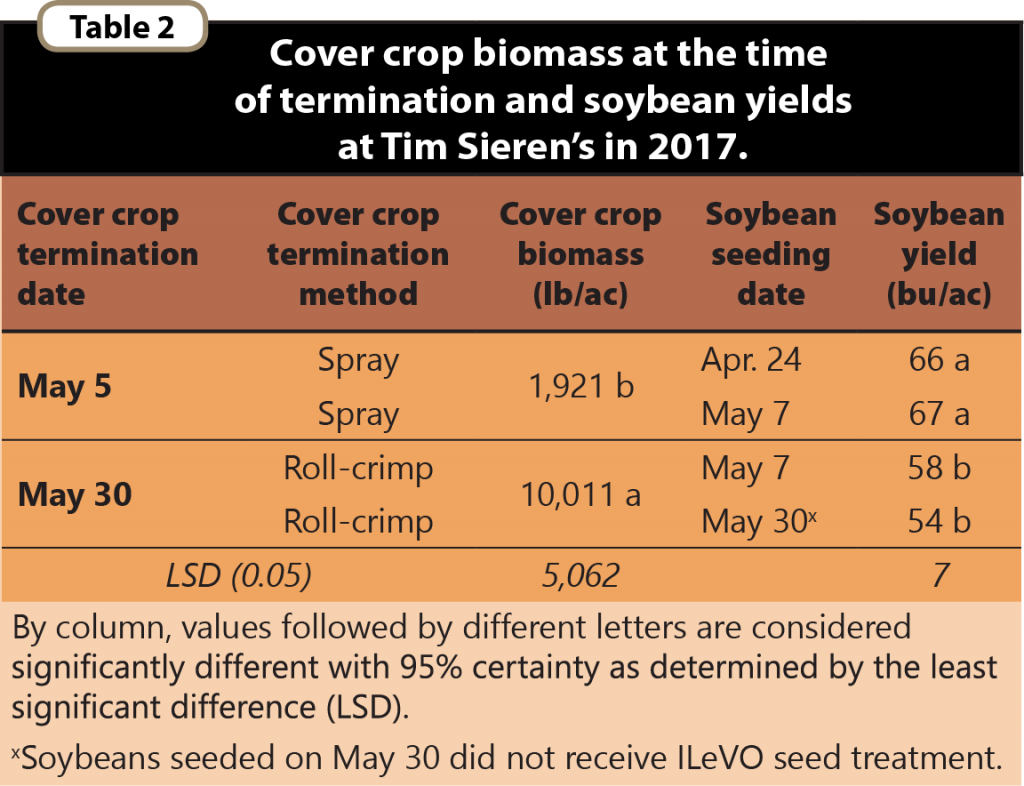 Soybean yields were mostly affected by cover crop termination date (Table 2). Regardless of soybean seeding date, yields were greater on average by 10.5 bu/ac when the cover crop was terminated with herbicide on May 5 compared to roll-crimping the cover crop on May 30. Sieren’s results from the May 5 cover crop termination date and May 7 soybean seeding date confirm those of past Practical Farmers on-farm research showing that soybeans can perform well when planted shortly after terminating a cover crop in early May with an herbicide (Gailans et al., 2016). When considering only the May 7 soybean seeding date, waiting until May 30 to roll-crimp the cover crop resulted in lower yields than terminating the cover crop on May 5 with an herbicide. It is likely that the 8,000 lb/ac of biomass produced by the cover crop between the time of soybean seeding and roll-crimping likely interfered with and competed with those soybeans. “The rye terminated 3 weeks after seeding the soybeans [on May 7] probably robbed some moisture from those beans,” Sieren said. “It was pretty dry all summer (Figure 1).” In fact, similar yields were achieved when both seeding soybeans and roll-crimping on May 30. “The beans all grew to about the same height and filled in; you couldn’t tell what was done where and when.” Across all treatments, soybean yields were near or above the Washington County 3-yr average of 56 bu/ac (USDA-NASS, 2017).

Sieren noted that the severe hailstorm on May 17 also reduced the stand of the soybeans planted on Apr. 24. He estimated that the stand was thinned by as much as 50%; down to 80–90,000 plants/ac from a target seeding rate of 166,000 seeds/ac. “The May 7th planted beans were just starting to emerge, so they weren’t damaged as much,” Sieren said. “The standing rye protected most of those beans and they bounced back quickly.”

It is important to note that the only in-season application of herbicide to soybeans in both roll-crimp treatments occurred on June 27 (to control weeds and fully terminate the rolled cover crop). Meanwhile the soybeans in the spray treatments received two herbicide passes (cover crop termination date and June 27). “Weed pressure was noticeably less in the late terminated (May 30) rye,” Sieren said. 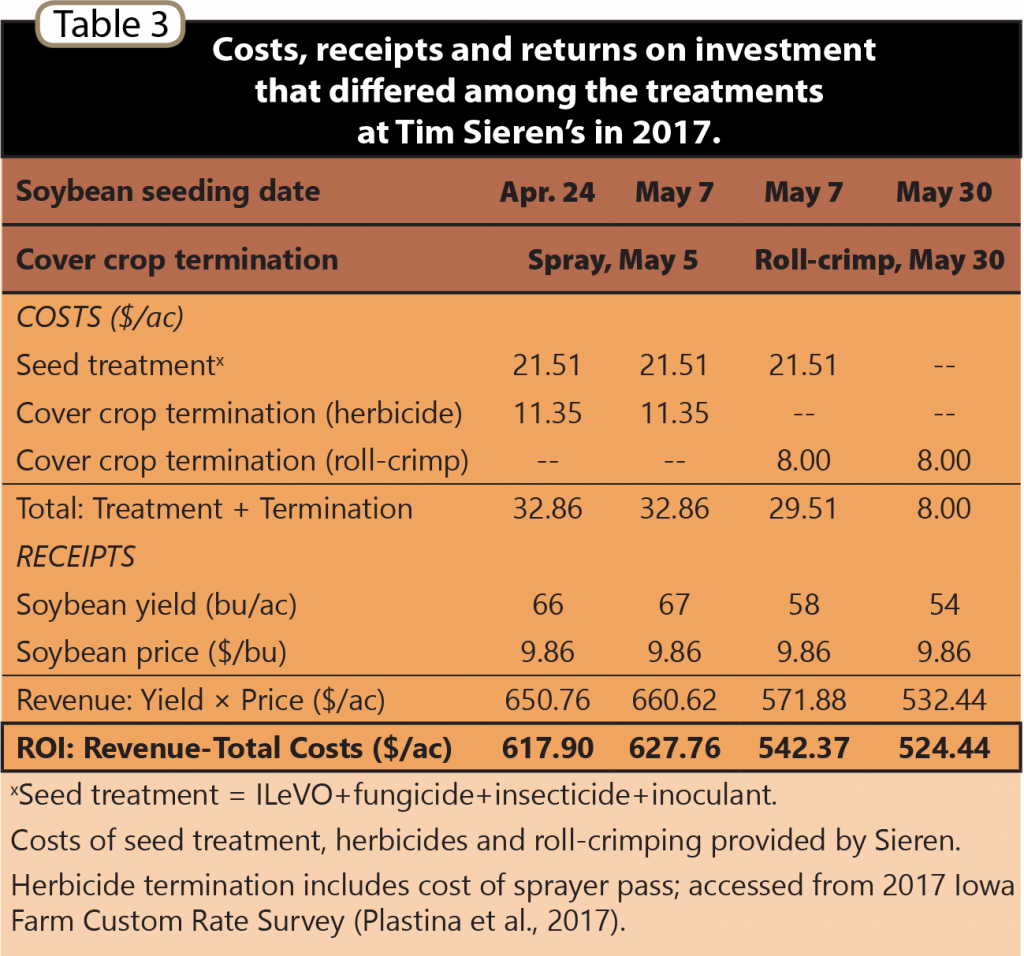 Table 3 provides a summary of costs, receipts and returns on investment that differed among the treatments at Sieren’s. Costs associated with cover crop seeding, soybean seeding, in-season weed control and soybean harvest were equivalent across treatments and are thus not considered when calculating the return on investment for each of the four treatments. Return on investment was greatest when the cover crop was sprayed on May 5 and the soybeans were seeded two days later on May 7. This treatment incurred the greatest costs and greatest soybean yield. Roll-crimping the cover crop on May 30 was less expensive than terminating the cover crop with an herbicide. While Sieren did need to apply herbicide on June 27 to completely kill the roll-crimped cover crop, this cost was incurred by all treatments (in-season weed control) and not included in Table 3. In the interest of completeness, the full cost of termination for the roll-crimp treatments could be considered $25.28/ac ($8.00 for roll-crimp + $17.28 for herbicides and sprayer pass on June 27). It should be kept in mind, however, that this is confounded in the fact that the June 27 sprayer pass was made to also control weeds and not solely to finish termination of the cover crop.

Roll-crimping the cereal rye cover crop proved to be a challenge. “The rye needs to be roll-crimped before the planter goes through, not after,” Sieren said. “I didn’t have a heavy enough stand to crimp down, and stay down (possibly due to the May 17 hailstorm). It didn’t kill all the rye, and after 2 weeks, you couldn’t tell it had been crimped, and it stayed greenish until I finally hit it with glyphosate 2 weeks later. Then it died and the beans finally acted like they wanted to grow.” 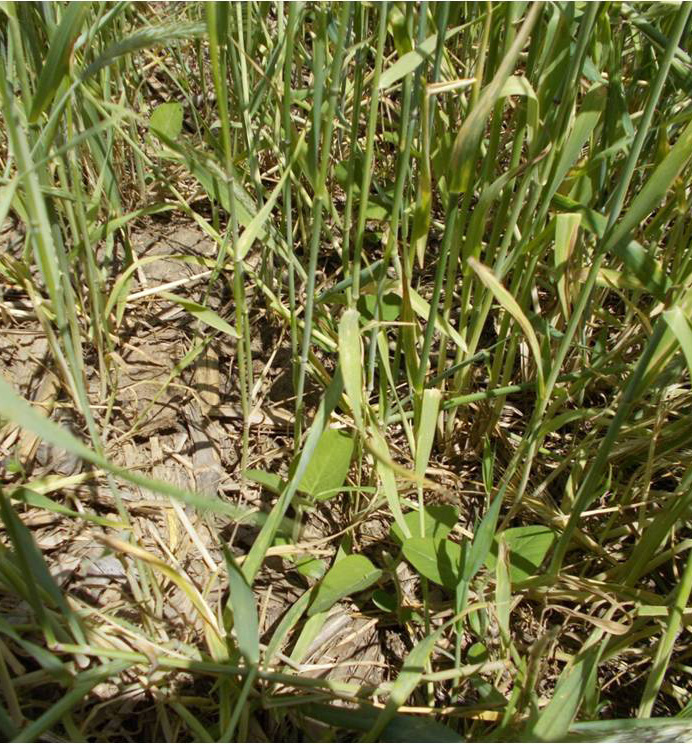 Soybeans emerging through cereal rye cover crop on May 30 just prior to roll-crimping. Soybeans were seeded on May 7